Reflections of an Unofficial Ambassador

Thirteen years ago, Sundos, a slight young woman wearing a headscarf, approached me in a cafeteria at the University of Jordan in Amman. She’d written an essay in English about what she did over the summer and asked me to review it before she handed it in to her teacher. When this young muhajiba approached me, a strange and foreign man, and asked for help, she crossed a cultural chasm. When I responded positively, I was transformed from a 27-year-old graduate student into an unofficial ambassador. I trace the origins of the America’s Unofficial Ambassadors initiative to that optimistic moment. 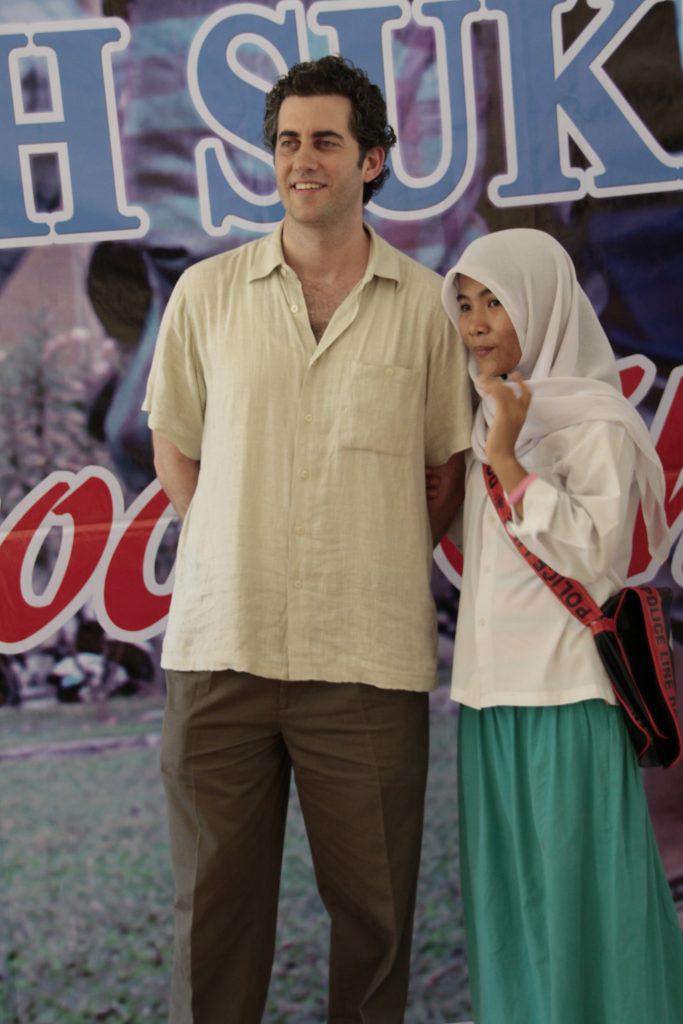 Ben Orbach with a student at Sukma Bangsa school in Aceh, Indonesia.

America’s Unofficial Ambassadors is a citizen diplomacy initiative aimed at increasing the number of Americans who volunteer in areas of human development throughout the Muslim world. Over the past four years, we’ve sent close to 100 Americans from different faiths and backgrounds to volunteer, anywhere from a week to a year, in nine countries throughout Africa, Asia and the Middle East. The premise behind our work is that each of us can make a difference in America’s multi-faceted and increasingly complicated relationship with the people of the Muslim world. Further, we can each participate in building mutual understanding by sharing our experiences at home, through blog posts, published essays and community presentations. By (our own) conservative estimate, we’ve reached 100,000 Americans with our mission.

Upon reflection, I find my experience in Jordan and then in Egypt — I had to evacuate Jordan when the war in Iraq began — to be a surprising journey ground in persistent idealism, intellectual curiosity and good luck. Today, Jordan is a hub of expat activity, from international development workers to foreign students to employees of Fortune 500 firms. In 2002, I was just one of a handful of Americans at the university, and really in all of Amman. For decades, Cairo was a mecca for Arabic language students; in 2013-14, a paltry 37 American students studied abroad in Egypt. I backpacked through Syria by myself in 2002 — today the country is mired in a conflict with no end in sight. While much in these places has changed recently, my experiences were, for me, a building block to a career of creating partnerships between America and the Muslim world.

On the morning of 9/11, I was headed to Arabic class when I found out about the attacks. I’d written my Master’s thesis on Osama bin Laden and al-Qaida that spring, but in the days after 9/11, I became transfixed with a need to know what regular people in Arab countries were saying about the attacks, bin Laden and the United States. I realized that I needed to speak Arabic well to find answers to my questions. That summer, I set off on a yearlong quest that led me to smoke-filled salons and open-air coffee shops. I engaged in what seemed like 1,001 discussions about U.S. foreign policy, the Jews (I’m one of them) and 9/11. Those debates were great for my language acquisition in that they were repetitive to the point of being scripted. I played the role of unofficial spokesman as I tried to dispel conspiracy theories and shed light on questions about the U.S. war with Iraq, my country’s intentions for the region and our visa process.

The more interesting conversations, though, were the ones that went beyond the theater of these sessions and my flashcard-bolstered “talking points” on weapons of mass destruction. These other, one-on-one conversations, usually while sitting in a car or a similarly private but public place, were about the details of affording to marry, aspirations for an easier life somewhere else, and our culture that streamed across borders — we all loved Mariah Carey (except me). Salah, an Egyptian cook, taught me about the face of poverty in the absence of economic opportunity; I learned from Khulood, a Jordanian teacher, about the deficiencies of education systems that don’t foster critical thinking skills; and Fadi, a Palestinian refugee, gave me insight into the ins and outs of leading a second-class citizen