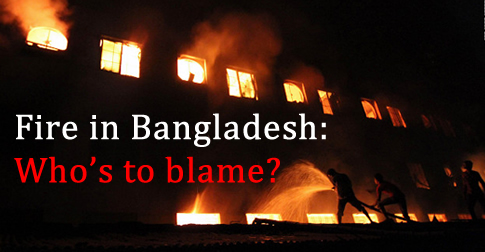 From Stranded to Standard: Who’s to Blame for the Failure in Bangladesh Fire

News travels fast. News in Silicon Valley travels even faster. Two days before Ron Johnson resigned from Apple inc. to become the CEO of JC Penny, there was a flurry of hype. Johnson was brought on to increase the sales of JC Penny, giving the department store a new image while keeping prices low (CEO Johnson was awarded $52.7Million upon signing). In December of 2012, I visited JC Penny, curious to understand how Johnson has been able to revamp the image, collaborate with designers and market strategically. Browsing, I noticed that the register counters where switched out with Apple hand held scanners, prices were at an all-time low, with designer labels such as Liz Claiborne, Joe Fresh and Mango catering to young hipster-type, techie and designer audiences. JC Penny was able to keep overhead and costs low by having factories in Bangladesh manufacture their clothing and signing contracts with designer stores such as Mango and Joe Fresh that only pay their Bangladeshi workers an average of 14 -24 cents an hour. JC Penny was not the only clothing company that abused and violated the Worker’s Right Consortium. Mango, Joe Fresh, Cato, The Children’s Place, Dress Barn, United Color of Benetton, Primark, H&M, GAP and Walmart, all have operations in Rana Plaza that killed over 300 people during its fire and collapse this past week. As a business owner myself, I understand, that the cost and operation of a design company is high, as it is often one of the most expensive and high demanding businesses.

Since designer brands, whether in clothing or custom-made products such as furniture, textile and home goods, are not the fundamental basis of priority goods to sustain a living, often these goods are categorized in secondary or tertiary needs. Therefore, the cost and demand fluctuates based on the consumers market. With today’s economic turmoil, consumers are not in immediate need to buy clothing, let alone “designer” clothing. Thus, retailers such as JC Penny, Mango, Walmart, Fresh Joe, etc. are under pressure to keep overhead of their companies to a minimal low while selling products with a 300%-1000% markup (a profit is made even if the product is on “sale” for a consumer in Europe or the United States). In order for overhead to be kept minimal, sacrifices are made. There are three categories in which the designer can make sacrifices to meet the market’s demand and still gain profit: the quality of the product, the employees, and the factory. Designers will never sacrifice their product. Take Louis Vuitton, for example; rather than selling their product after several years above the marginal price, each year if their line is not sold, they burn the line to avoid sacrificing their brand.

In the incident that we witnessed last week, the factory burning and collapsing killing 300 people and leaving 1200 people severely injured in Savar, Bangladesh, is the sacrifice that these companies make: buildings and lives. Several companies establish factories and production lines similar to this one in rural and developing countries in order to avoid building and maintenance codes that are established in the United States and Europe, keeping cost and overhead to a minimum and maximizing marginal profit. In the United States, when a building is under construction, there are several building permits that have to be acquired before a building is allowed to have any occupancy. Two of the major building permits are the “Fire Codes” known as NFPA Codes (National Fire Protection Association) and the American Society for Testing and Materials (ASTM), which allows for the clearance of building materials– dead loads, such as building vertically, and live loads, which is the occupancy rate of each room/floor. Granted, not all codes and regulations that are strictly adhered to in the United States are abided in a developing country such as Bangladesh. Rather than meeting the same building standards, the companies involved in the Rana Plaza built four upper floors illegally without permits: “There was a structural fault as well”, added Ali Ahmed Khan, the head of the National Fire Services in Bangladesh. Based on U.S. codes, not only does the steel have to meet additional floor requirements for additional dead load, it also has to meet ASTM code: Unprotected Milled Steel loses half of its ultimate room temperature strength at a temperature greater than 1000ºF. In the case of Rana Plaza, the steel had lost both its structural strength and fire strength when a dead-loading (the additional four floors) was applied to it; thus, when the fire occurred, the steel was not able to withhold the guaranteed 45-minute evacuation before it started “melting.” However, if the building owners and the companies who were using the building had taken the right approach, they would have needed to upgrade the steel columns to an adequate column size to support the extra four stories, thus allowing up to 3 hours of fire protection before the building was to collapse. The same standard applies for all walls; by standard, each 2×4 wooden stud gypsum wall allows for a 1-hour rating before it collapses, meaning that easily 300 people would have been able to exit the building within that time frame (CNN reported: 2400 people entered the building at 8am and the building collapsed at 9am). However, given the economic collapse the entire world is facing, both the building owners and the companies using the facility did not care to take that extra step to protect their employees and purchase steel from China, one of the world leading nations in steel.

Sadly, this 8-story building which had over 3,122 employees, ” most of them female garment workers between the ages of 18 and 20″, did not have adequate walls, based on the 1-hour rating and typical standard doors, which allow for a minimal 1-hour rating and adequate circulation space. By U.S. standards in any given space, there needs to be an emergency exit route without the use of elevators or electrical lifting, down to the ground level. Typically at every 20′-0″ in either direction there must be an emergency exit door for evacuation. This building failed to meet that standard as well.

What is the most distressing in the situation is not the burned building but rather the 18-20-year-old female garment workers who were only being paid 14-24 cents an hour (10-hour work shift generates $1.40-$2.40 per day – imagine if JC Penny’s ex-CEO Johnson was making that much every day), who were killed or are in critical condition. We often hear about how various non-profit and charity organizations are creating opportunities in developing countries to help young women to be independent and not be ‘oppressed,’ such as in Half the Sky: Turning Oppression into Opportunity for Women Worldwide by Nicholas D. Kristof. However, we as consumers in the West have failed. If we continue to give in to the capitalistic mentalities of corporations such as the JC Penney’s and the Walmart’s of our society, the dollars and cents that we give to the various charities will not make a difference. Rather, what we need to strive for is to take that next step and make sure that if these corporations want to continue to be in business, they need to meet Workers Right Consortium and demand retailers to compel to standard safety conditions in the countries in which they are running their registered companies.

Maryam Eskandari is the founder of MIIM Designs LLC, an architecture and research studio based in Palo Alto, California.