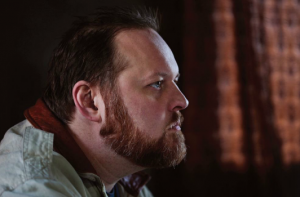 I was staying at a hotel in Queens, and woke up to a phone call from my manager Al Sirowitz. His call was expected; we were going to be working at a recording studio that day. I felt great and was eager to get to work on my music. Instead of his normal upbeat personality, Al seemed subdued. He told me to turn on the TV.

I did, just as the second jet slammed into the south tower. I ran into the hallway – and watched the twin towers burn from the hotel window.

By September 2001, Todd Shea’s music career was finally taking off. After playing in bands and on his own in nightclubs and restaurants around the country, he had moved to New York City in 1998, formed his own band and had a record deal. He even had a gig booked at the famous CBGB’s Gallery in Manhattan, on Sept. 12. “But in an instant, happiness and anticipation was replaced by anguish and dread,” Shea writes in an online journal of 9/11 stories.

Shea’s first impulse was to do something to help. He rushed to his friend Dan Panitz’s office not far from Shea’s hotel. From the rooftop of Panitz’s building, Shea saw the second tower fall. Panitz, a songwriter, was also CEO of a substance-abuse counseling organization. They set up a temporary morgue and counseling services, and Shea spent the day driving counselors and families of firefighters to hospitals and staging areas.

The next day Shea was at Ground Zero. “I didn’t want to go,” he says. “I just felt I had to.” He began working with a disaster-relief center at Chelsea Piers. With clearance secured for his band’s van, he packed it with Gatorade, water and fruit, and spent the next few days delivering drinks and food to firefighters and police officers throughout lower Manhattan. Shea set up a makeshift dispensary on a street corner to distribute dust masks and medicines donated by area pharmacies and stores.

Sept. 11, 2001 marked a turning point for Shea. He discovered that he had a knack for working effectively in high-stress crisis situations. “I don’t have any business going into collapsed or burning buildings,” Shea says. “I don’t know how to save lives. I can’t even treat a hangnail. But what I do know is how to make arrangements and get supplies to people so they can focus on saving lives.”

A former crack-addict, Shea became addicted to a new kind of high: disaster relief. In the past 10 years, he has found himself at ground zero of the world’s worst natural disasters – the Asian tsunami in 2004, Hurricane Katrina and the Kashmir earthquake in 2005, the earthquake in Haiti and the Pakistan floods in 2010, and the earthquake and tsunami in Japan in 2011.

Shea has also become an unlikely ambassador for Pakistan-U.S. relations. Before 9/11, he had never met a Muslim and knew nothing about Pakistan or Islam. “I was totally ignorant, didn’t know about the hatred out there. My life was about drugs and music,” Shea says. “It’s hard to care if you just don’t know.”

Now he lives and works in Chikar, a mountainside village in Pakistan-administered Kashmir, and is the founder and executive director of Comprehensive Disaster Response Services (CDRS), which provides primary healthcare to 200,000 Kashmiris, as well as other Pakistanis affected by disaster, who would otherwise have limited access to healthcare. CDRS employs more than 80 people across its nine medical centers, and has treated nearly 500,000 patients since 2006.

“Before going to Pakistan, I remember people would tell me you’re nuts for going over there; you’re going into the belly of the beast,” Shea says. “The people I met in Pakistan were good, decent human beings, who happened to be Muslim.” He adds, “If every American could spend one week in Pakistan, they would never have a problem with Pakistan.” Shea is vocal about what he sees as U.S. foreign policy mistakes in the region and America’s responsibility toward Pakistan. “If American leaders had not abandoned Pakistan and Afghanistan after the Soviet war, and had instead engaged in a Marshall Plan for the benefit of the region’s populace, the situation would be very different than what it is today,” he says.

In the meantime, Shea is using music to promote understanding. He has assembled American and Pakistani musicians in an initiative called Sonic Peacemakers to offer a different perspective and to share what is universal.

Shea learned a great deal about Islam from his staff and from reading passages of the Quran. Stories about Prophet Muhammad (pbuh) made a particular impact on him, such as the story of how the prophet cared for a woman who had repeatedly thrown trash at him, or how he encouraged people to look after their neighbors, 40 on each side. “Can you imagine if everyone did this,” Shea says. “It would be like a chain of compassion; we would all get looked after.”

Just after the earthquake, Shea and young Muslim volunteers would sit around a fire at the end of a grueling day and discuss these stories. “It was obvious that to them Islam was not some violent religion about killing white people, but a religion about following the example of a good human being,” Shea says. “These stories, which are so much a part of Muslims’ lives, have shown me that Muslims are very far from being extremists, and that unfortunately politics and culture have more to do with negative behavior than Islam.” This is the message Shea has been sharing during his speaking engagements around the United States in an effort to dispel misperceptions about Islam. “The people who fly planes into buildings represent a small group of fanatics. It’s wrong to paint the entire population of a country or a religion with the activities of its few bad people,” he adds.

Shea, 44, is 5-foot-11-inches and weighs 260 pounds, has a beard and red hair, and looks more like a lumberjack than a healthcare manager or cultural ambassador. His voice is loud, his style blunt. He is in constant motion, ready to meet anyone who can help him procure medicines, raise funds or promote understanding, his guitar and a plastic shopping bag of essentials in tow. Given his frenetic pace, he sleeps wherever he can – in cars, on mountainsides, or often in the homes of Pakistani-Americans he has befriended. With Shea, what you see is what you get: a strong-willed, fearless, passionate, sometimes reckless, larger-than-life individual who can’t bear to hear a baby cry or a kitten whimper.

Shea was born in Howard County, Maryland in 1966. When he was 12, his mother took an overdose of Valium and ended up in the hospital, where she died two weeks later from complications. Devastated, Shea started getting into fights, skipping school, taking drugs and getting arrested. “There wasn’t any kid more troubled than me,” he says. “I was not a nice person. A little bit angry and ready to fight anyone.”

His guitar brought him solace. His mother had bought it for him just before she died. He taught himself to play, strumming Van Halen and AC/DC songs until he figured out the notes. “Music saved me from depression and suicide,” Shea says.

At 16, about to fail ninth grade for the third time, Shea was sent to an alternative boarding school. He went into therapy and got into better physical shape. In the 11 months he was there, he made up grades nine, 10 and 11. But soon after he returned home, he started doing drugs again and hanging out with the wrong crowd. By the time he was 18, he was addicted to crack cocaine. “I knew I was going to die. I didn’t want to end this way,” he says.

Shea joined the Marine Corps to clean up his act, but was kicked out six weeks later when the results of his urine test showed drugs. Back in Maryland, he stayed with a friend’s foster parents. They knew of a country-rock band looking for a guitar player. He tried out and joined the band, and spent the next several years playing at clubs and bars around the country.

At 23, Shea married a woman who was pregnant with their child. They separated two years later and shared custody of their son, Justin, now 20, a third-year honors student at St. Mary’s College of Maryland.

After Sept. 11, Shea worked to help salvage his friend Panitz’s counseling company, which was in financial trouble. When the Asian tsunami struck in 2004, Shea again focused on disaster relief, joining a group he found online that was headed to Sri Lanka to rebuild homes. During Hurricane Katrina in August 2005, he coordinated the delivery of inflatable rubber rafts and helped the U.S. Army’s 82nd Airborne division and other search-and-rescue teams. Within a week of watching news of the 2005 Kashmir earthquake, Shea was on a U.S. Army Chinook helicopter to Kashmir as the logistics coordinator for a group of doctors called Operation Heartbeat. He never left.

“I fell in love with the children,” Shea says. “They were so badly injured. I’ve always had a heart for the downtrodden. Plus, the people asked me to stay.”

I visited Shea in Pakistan in December 2009. We drove in a beat-up four-wheel drive Jeep Cherokee around switchback roads up and down layers of mountains from Islamabad to Chikar, about 6,000 feet above sea level and not far from the Line of Control with India. The scenery was spectacular, but the drive was treacherous at times. The earthquake sliced many of the mountains, and adequate roads have still not been constructed. At the time, CDRS headquarters was a three-story building with a wrap-around balcony on a hilltop with spectacular views of the Himalayas. Now the medical facilities are in a newly built government health center across the street, which includes a dental unit, vaccination center, maternity and general ward, government and CDRS pharmacy, a laboratory and an ambulance. Two doctors and several medical assistants are on call 24/7. A stream of patients, mainly women and children, visited the clinic while I was there, with ailments ranging from high fevers to chest pains. Emergency cases are referred to the nearest hospital. 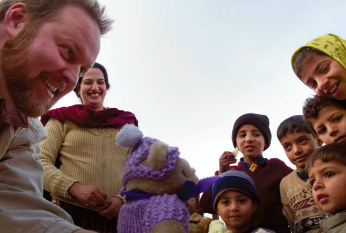 Shea has introduced a community insurance program to empower villagers to take charge of their own healthcare needs. In return for 25 rupees per month (about 30 cents), citizens receive primary and emergency care, vaccinations, medicine, ambulance service and other benefits. Since October 2009, more than 15,000 people have signed up.

In 2009, Shea helped to found SHINE Humanity (Sustainable Healthcare Initiatives Now Empowering Humanity), registered in the United States to provide international disaster relief and build longterm sustainable healthcare initiatives in developing countries. SHINE Humanity deployed a team of medical professionals in Haiti in January 2010; provided mobile medical units, food and other assistance during the Pakistan floods; and coordinated food, water, medicine and heating oil after the earthquake and tsunami in Japan in March 2011. CDRS is an independent implementing partner for SHINE Humanity in Pakistan.

The relentless disasters of 2010 have taken a toll on Shea. “It’s hard to absorb so much pain,” he told me recently, tearing up uncharacteristically. “If you keep running on four flat tires, eventually you’re just rolling on the rims; soon they’re going to catch fire.” But no doubt Shea will be at ground zero of the next natural disaster. Like the words of a song he wrote that he sang on our ride from Chikar to Islamabad, while careening down mountain roads and through small towns in a rickety white Toyota: “The man upstairs must be watching over me, ’cause my prophesized demise was not meant to be. I will rise again.” §

Photos by Shahidul Alam. Alam is the founder and CEO of Drik Picture Library, Principal of Pathshala, the South Asian Institute of Photography, Director of the Chobi Mela festival and Chairman of Majority World agency.