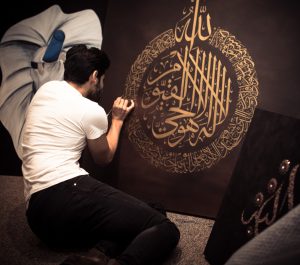 At a time in this country when even the sight of Arabic writing can make some people nervous, Aadil Abedi [1], a London-based artist, is launching his Arabic calligraphy-inspired paintings of Quranic verses and Persian couplets in the United States.

“Given the current climate we’re in, it’s even more important to showcase that there is something beautiful in our faith, in our traditions, in our art and culture,” Abedi says. “As a Muslim, in my small capacity from a North London studio, if I can share something that propels our history, culture and art in a more healthy way, on a more human level, that’s what I want to do.”

Abedi’s art is inspired by Arabic calligraphy, a script that he has loved since he was a young boy, even before he could read it. “I remember I used to stare at the letters — the curvature, the thick and thin, the flow; it is so beautiful.”  He’s quick to add that he’s not a calligrapher. He doesn’t have the specific training and doesn’t use the precise rules that are essential to traditional Arabic calligraphy. Instead, he takes the ancient script and gives it a contemporary interpretation by playing with the width, length and fluidity of letters and the placement of punctuation marks and accents. “When I realized that an alif [first letter of the Arabic alphabet] didn’t have to be straight, that excited me. While giving it respect, I’ve made it my own,” he says.

With his creative manipulation of lettering, Abedi wants to make the Arabic script more accessible and more relatable. He wants to introduce the dynamism and adaptability of the ancient script to younger audiences. “There is so much good in this tradition, and it can be universal, it should be universal,” he says, “like Chinese calligraphy for example, which is appreciated around the world.”

His timing is prescient. While Islam is challenged, questioned and misunderstood, Abedi’s work gives people an opportunity to engage with the faith through beauty, language and script. He is keen to point out that his art is not political, nevertheless his paintings provide an invitation for dialogue — a chance to ask questions, to consider the meaning of Quranic verses, ultimately to gain a deeper understanding through a medium that connects and resonates. Art, after all, provides a canvas to explore issues in a way that feels engaging, unintimidating and potentially transformative.

His most recent collection of paintings, titled “Hope,” has a circular motif, with bold sweeping brushstrokes and vibrant colors in cobalt, magenta and maroon. “The circular motif reminds me of God’s embrace,” Abedi says. “The colors, the lights, the darks show different layers of struggle we all go through. At the end of the day, He is the only one who will be there for us.”

The theme of the collection is mercy, remembrance and compassion, and Abedi uses verses from the Quran that exalt these qualities. In a striking piece in shades of blue, he writes the verse: “Then which of the favors of your Lord will you deny?” In another, on a pitch black background with elegant lettering in gold, he writes, “He is with you wherever you are.” The verses are serene, reassuring and contemplative, even if the colors and textures are fiery and bold. It’s reminiscent of our time, he says. “Amidst all this chaos of the world, we should never forget Him.”

Abedi’s art is very much a reflection of his mixed identities.  His ancestors were from Iran, his family is from India and he grew up in England. His art, like his background, is a blend of ancient and current, of East and West, of tradition and modernity. He calls his style, simply, fusion.

Growing up, Abedi had no idea he would become an artist, and his path has been anything but straightforward. “No one in my family is an artist, and I didn’t have any artist friends,” he says.  “I figured it out as I went along.” He studied economics in university and worked in marketing, television and public relations, but soon realized “the 9-5 was not for me.” At 24, feeling stuck, he told his parents he wanted to become an actor. He enrolled in the Lee Strasberg Theatre and Film Institute and left for New York. “I had the best year of my life, it was a great place to get inspired, the galleries, the graffiti, the museums.” 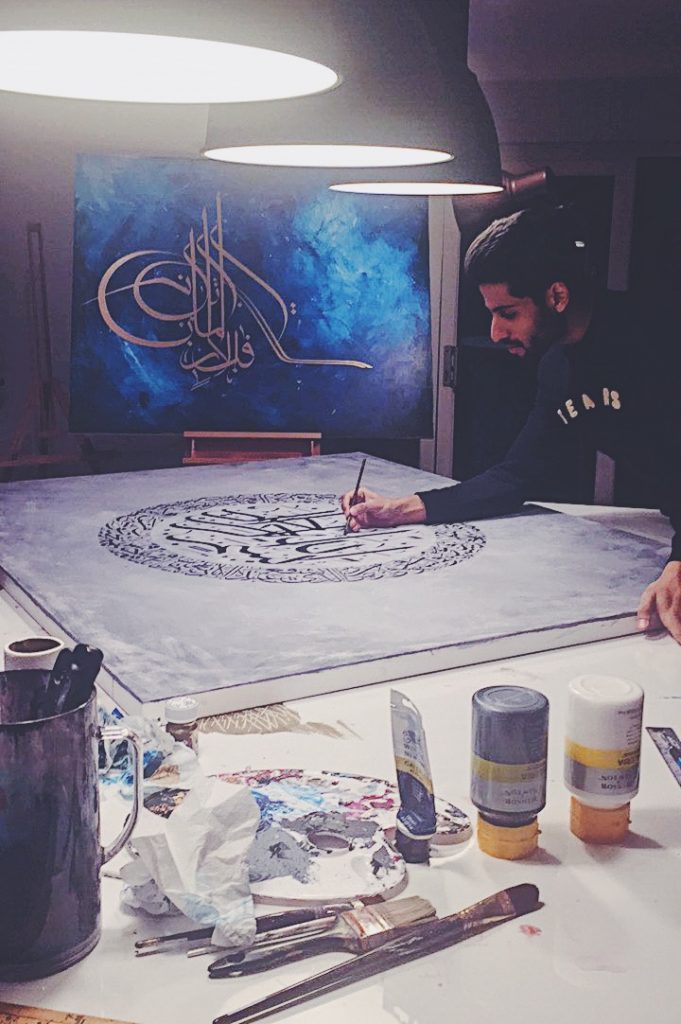 When he finished his training, he came back to London but then decided to pursue a Bollywood career and headed for Mumbai. “I was in this mindset that I wanted to do something different, that I wanted to do something creative,” he says. He was in a movie, did a few ads and some modeling, but quickly found out that the film business did not align with his values. He moved back to the U.K. and felt stuck, again.

“Art became my savior,” he says. “It was a huge blessing from God.” He had always dabbled in painting, and was good at drawing and copying when he was young. But when he started painting more seriously, people wanted to buy his work. “I never once thought that I would actually become an artist as a profession.”

In the past two years, Abedi has exhibited in the U.K., United Arab Emirates, Australia, and elsewhere, and has been commissioned by Bollywood royalty Aishwarya Rai Bachchan and the royal family in the UAE. He is launching his art in the U.S. with a several city tour, starting with Chicago [3] at the end of April.

At a time when fear is high in this country, Abedi’s paintings — with their eye-catching flourish of color and movement around an Arabic script that inspires rather than alarms — can serve as a much-needed entrée for long overdue conversations.

All images via Azam Abedi.

Salma Hasan Ali is a writer, storyteller and CIO of KindWorks. Her Ramadan blog this year will focus on ‘30 days 30 refugee stories [4].’ Her work is available at her personal website [5].