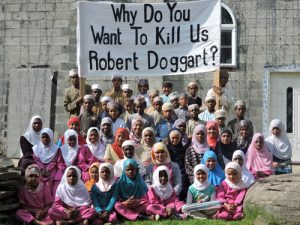 That was written on the banner held by nearly fifty young Muslim schoolchildren after a Tennessee politician, Robert Doggart, threatened to attack their hamlet in upstate New York. Doggart targeted this small town, commonly known as “Islamberg,” because of its dense Muslim population, and planned to burn down the local mosque and Islamic school, and kill anyone–children included–who came in his way. 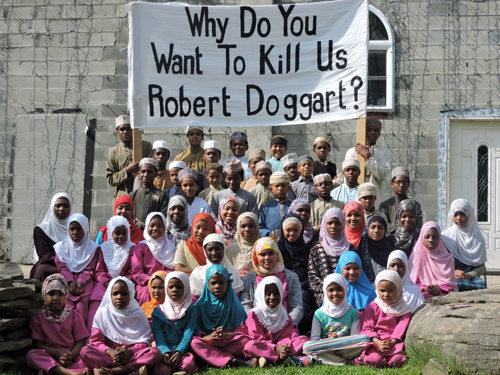 A heinous act of hate and domestic terrorism was unfolding, yet most Americans are completely unaware of this man’s deadly plot. Unlike instances in which Muslims are suspected of violent acts that are broadcast widely in the news, this story received very little media coverage, as well as no press releases or statements from the U.S. Department of Justice heralding Doggart’s arrest.

It is unacceptable for our country to stay silent when someone threatens to murder a school of American children simply because of their faith. That’s why I wanted to raise the issue directly with President Obama at the White House Iftar on Monday. I showed him the heart-wrenching picture of Islamberg’s young boys and girls, some of them adorned in headscarves and other religious garb, and asked for his leadership in combating hate. He looked at the picture intently and expressed interest in wanting to learn more.

Just days after the senseless killing of nine worshippers at Emanuel AME Church in Charleston, South Carolina, many Americans are asking ourselves how we can eliminate hatred in the very spaces where “we seek solace and we seek peace, in [places] of worship,” as President Obama said during his remarks after the tragedy.

How do we as concerned Americans stop violent attacks against communities of faith and ensure that anti-Muslim bigotry is no longer acceptable? There’s no simple answer, and there is likely no one factor that will be the cause for change. But one factor that is undeniably critical is the need to advocate with public officials, starting with our nation’s highest elected official.

Earlier this year, Muslim Advocates Executive Director Farhana Khera led a meeting with President Obama and a diverse group of American Muslims, including, among others, comedian Dean Obeidallah, University of Pennsylvania Chaplain and Muslims Make it Plain! founding member Kameelah Rashad, and Islamic scholar and professor Dr. Sherman Jackson, to voice the concerns of the community.  Together, participants highlighted the crisis of anti-Muslim hate, and the need for the President to use his bully pulpit to educate the public and tamp down the deadly anti-Muslim rhetoric that has taken root in our country. The very next day, President Obama made some of the strongest  [2]statements in defense of American Muslims, reminding the public that the Muslim community is an essential part of this great nation’s fabric.

In the wake of the horrific murders of three Muslim students in Chapel Hill earlier this year, we, the NAACP, Color of Change, The Sikh Coalition, ISNA, the Muslim Student Association of U.S. and Canada, along with nearly 145 other groups [3], urged then-U.S. Attorney General Eric Holder to open a federal hate crime investigation. We have also met with the Acting Assistant Attorney General for Civil Rights Vanita Gupta to urge federal hate crimes investigations and prosecutions of not only the murders in Chapel Hill, but also a number of recent attacks on Muslims in communities across the country.  At this time of great pain and fear, it is absolutely crucial that our nation’s top officials send a strong message that anti-Muslim hate will not be tolerated and will be prosecuted to the fullest extent of the law.

As the lead for Muslim Advocates program to counter anti-Muslim hate, I have travelled across the country and spoken to numerous American Muslims who have been directly affected by the climate of hate against Muslims. I have sat across from teary-eyed relatives as they have shared stories of their beloved family members who were murdered because they were Muslim. I have heard teachers’ voices crack as they’ve recounted how their Islamic school was vandalized and the impact it had on their young students.

While our nation’s public officials need to lead, the burden is on each of us to boldly speak out–from both inside and outside of government–holding our leaders accountable, and urging them to take action. As American Muslims, we must be prepared to use every tool available in our advocacy toolbox to raise our issues with our nation’s leaders at every opportunity.

There are smart, dedicated American Muslims–from the halls of Congress, to grassroots organizations, to the entertainment industry, to lawyers in the courtrooms–who are working tirelessly to hold our government accountable and ultimately bring about change. This change requires the collective action of our entire community. As each of us steps up in our varying capacities across the country to shed light on these challenges, it is only together, with our combined efforts, that we will achieve our common goal of protecting freedom for Americans of all faiths.