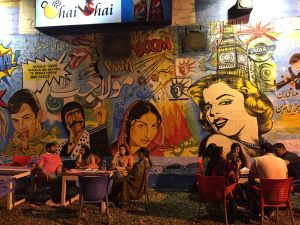 The last time I went to Pakistan was on a whim. I booked a ticket in London, flying from the Old World to the East, and landed in a city where it was too hot to breathe.

I was born, and had lived, in the United States my whole life, but I’d been visiting Pakistan since I was a child. Even with school, work and money in the way, I somehow always managed to do it. If I didn’t, I would go mad.

The people I encountered in Pakistan always approached my visceral attachment with curiosity. While I was trying to get in, they were trying to get out.

“I feel like I’ve hit the ceiling,” Dilaira confided in me. She was 28, pretty, the mother of a small child, and already the commissioning editor of her newspaper. “I feel like there’s not much I can do here anymore.”

And there wasn’t. She had run out of options.

People in Pakistan, especially the young, work hard. They go through the motions of what they’re meant to do and who they’re meant to be. Some set their sights on the world beyond, a world in which they can realize their full potential, a world locked out of their reach.

They know they are trapped.  The Embassy issues visas selectively, and everyone knows they’re taking a risk when they send in the photograph, application and money order.

But even if there is only so much you can do in Pakistan, so much is always happening. Karachi shuts down [1] because a man in London makes a phone call. The prime minister resigns [2] because the Supreme Court finds him guilty for not having upstanding Islamic moral character. A social media star, famous for cultivating online fame through provocative videos, finds herself in a scandal [3] after she wears a mufti’s hat [4] and incinerates his reputation. Later, she is killed by her own brother after her past is revealed by the media. Even amid the surreal, reality strikes over and over again to remind us all of this is real, that chaos means consequences. But no one is humbled by this knowledge. The cycle continues again with renewed force.

It seems Pakistanis have recovered from the early 2000s, the forever after days of 9/11, when the country was in siege from within.

Nobody could make sense of the Tehreek-e-Taliban Pakistan, a terrorist group that spread like a cancer and attacked from within. Nobody knew if Pervez Musharraf, the general who seized power like so many generals before him, could deliver the country from the war on terror or if his repressive measures were a smokescreen for delaying democracy.

And nobody knew who really killed Benazir Bhutto, the first woman prime minister, right when she was on the brink of returning to power. But if she had lived, would her rule have been much different from the corruption of the last few years?

There were some extraordinary people in the fray, who went farther and dug deeper than limits allowed. Journalist Saleem Shahzad reported [5] on the intelligence agencies’ connections with terrorist groups, and paid the ultimate price [6]. It was the only price considered acceptable in a country where every transaction is measured in blood. 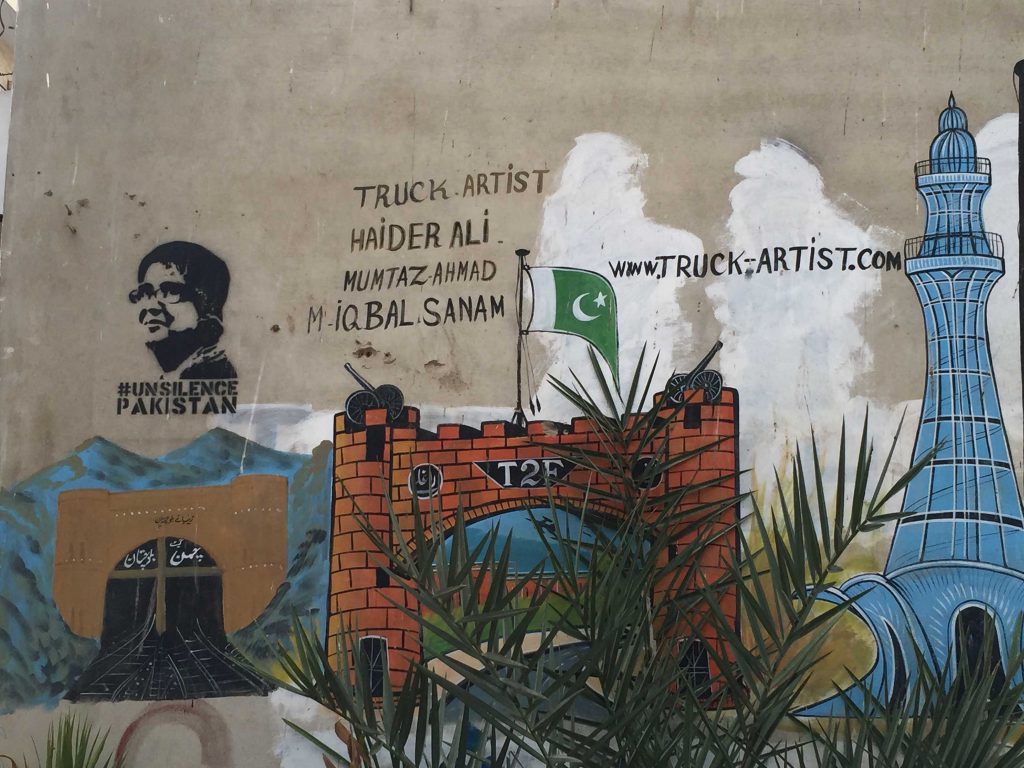 A mural outside T2F, a progressive space whose founder Sabeen Mahmud was murdered in 2015 > Photo via author

Today, Pakistanis have accepted the chaos. Now, if there is a suicide bombing anywhere, the response to it depends on proximity and, quite often, class. If it doesn’t affect your day-to-day life, you can turn off the TV and not care to think about it again.

Amid the resilience touted by the Pakistani army [7] in the aftermath of the terrorist attack on the Army Public School in Peshawar, which resulted in the death of 132 schoolchildren, there’s also laziness and a resigned sense of helplessness. Pakistanis have accepted they can’t change anything, even if they try everyday when they wake up, go to work and hope something — just something — will be different.

It comes to the point where everything happening is too fast to keep up with. But journalists in Pakistan, that fascinating fourth estate that constantly abuses its power in the vacuum of government stability, have to do it all the time.

I remember getting up early to commute to I. I. Chundrigarh Road last summer, where the headquarters of Dawn, Pakistan’s oldest newspaper, were located. I worked as an intern at the web desk, getting a taste of what living in Pakistan would be like if I pursued journalism there.

Most of the people I worked with were young, sharp and critical in their views and opinions. I remember my Urdu deteriorating because the entire office spoke an incisive brand of South Asian English. And I remember learning I couldn’t fake journalism, not when the whole nation was watching.

Something interesting was happening in the office, something missing from the headlines of foreign newspapers and virtually nonexistent in the early 2000s. A national conversation was going on, pushed forth by a team of talented young journalists.

Suddenly, the SEO of Pakistan’s most respected newspaper was being used to broadcast ideas — feminist and unafraid of criticizing power — and normalizing them in mainstream society.

It was the first time I had seen mainstream media being used to speak truth to power in a subversive way, the first time I saw what media could do if used the way it was meant to be used: as an independent monitor of power, and not a mouthpiece of business conglomerates or the government.

But even then, there was an irony to our work. While there was an Urdu version of the website, the journalism was overwhelmingly done in English by privileged, university-educated writers. Dawn.com [8] wasn’t an echo chamber on its own, but the entire vortex of English-language journalism in Pakistan excluded the majority of the population.

That was last summer, when there seemed to be hope. Today, Pakistan is much the same, or it’s changed a lot, depending on whom you ask.

When I last visited, everything from the fast-paced newsroom to the hot-and-cold war against terrorism had fallen to the slow, sluggish heat of summer. Amid the electricity crisis and the miserable faces of people commuting in hundred-degree weather, there was an impending dread that we were becoming a Chinese colony.

I sat on the back of my friend’s bike as we drove through his neighborhood. He pointed out square-shaped garbage bins in front of bungalows.

“You see all these garbage bins?” he said with muted scorn. “They’re provided by a Chinese company.”

Providing garbage bins to Karachi — a city that cannot afford to dispose its own trash, where starved cows graze on litter, and heaps of burning garbage pollute the air with toxins — makes sense. What doesn’t make sense is the $54 billion Pakistan now owes to the Chinese government [9]. 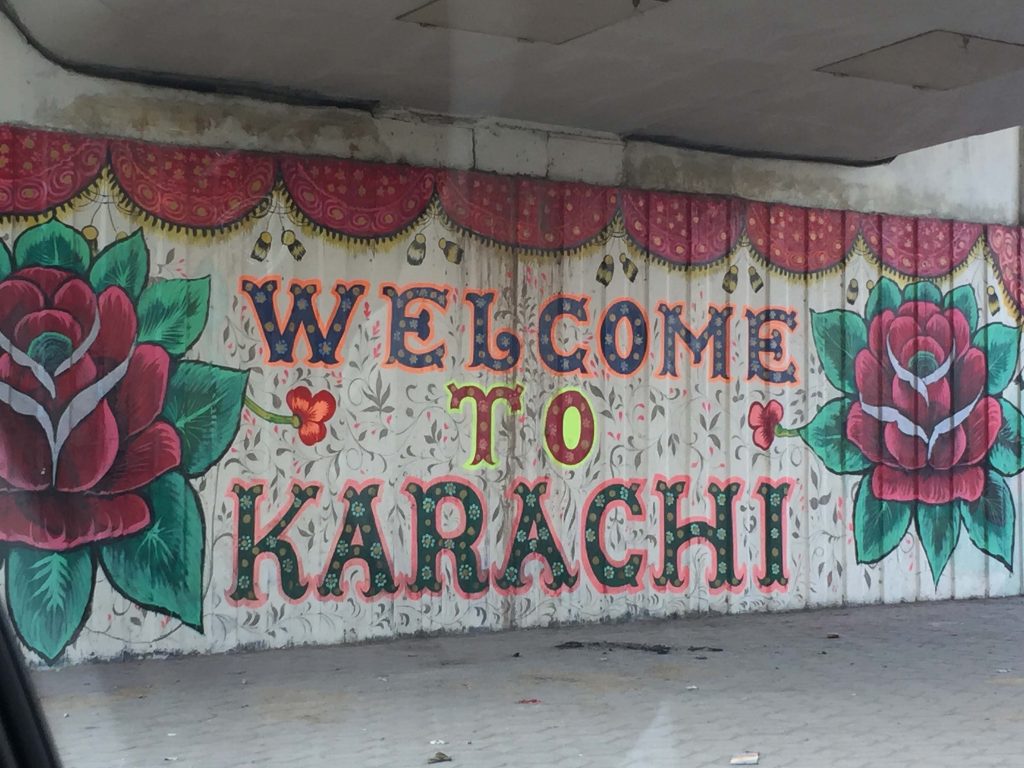 In a poor country that already lacks facilities, cannot take care of its people through public welfare programs, and where the corrupt whims of politicians dictate what money goes into whose pockets, who is going to pay that debt?

Remember. All transactions in Pakistan are made in blood.

I am supposed to be a journalist, but I almost stopped reading the news when an Afghan boy was shot dead in Karachi [10] after demanding his killer pay him 25 rs. for cleaning his staircase.

The optimism of last summer had waned. It was one thing after another, but nobody was inspired to action. I went to an event memorializing Mashal Khan, a student who had been killed by a mob after being accused of blasphemy [11]. I listened to a series of speeches on how the light had been extinguished from the future. I only remember the thirst burning in my throat and the inability to think or move in the heat.

I went to fancy restaurants where middle-class Pakistanis dined. I looked at these people and marveled at how they knew everything that was happening, but didn’t bother to do anything about it.

It was 2017. Of course, Pakistan is a conservative country. But these were educated, urban, middle-class people. They knew what they were doing. They just didn’t care.

I watched these people and wondered why I was arrogant enough to think I was any different.

Today in Pakistan, wealthy, educated people still keep servants in their homes. They have the sense it is wrong, something I would not have been able to say a few years ago, when a culture of subservience naturalized this class difference. But today, there is a sense a collective limit has been reached, and we are only keeping up the farce because we don’t know what else to do with our lives.

I’ve seen the faces of the people of my generation, the same ones driving me to where I need to go, cooking my meals and cleaning the house in which I live. In flesh and soul, we are equals, but we are separated by a universe of money, resources and education.

I am an unlikely person to understand their frustration. But I know how to bite my tongue when talking to people in power when I am in the U.S. I know how to keep quiet to avert the inevitable violence of retaliating against my oppressor. But it’s still not the same. Even if all else disappears, there is still the power of my passport.

The future of youth everywhere is mired in uncertainty, but what does the future of young people in Pakistan look like? They may stay where they are now and continue hustling to survive. Others may make it and hit the ceiling faster than they anticipated. 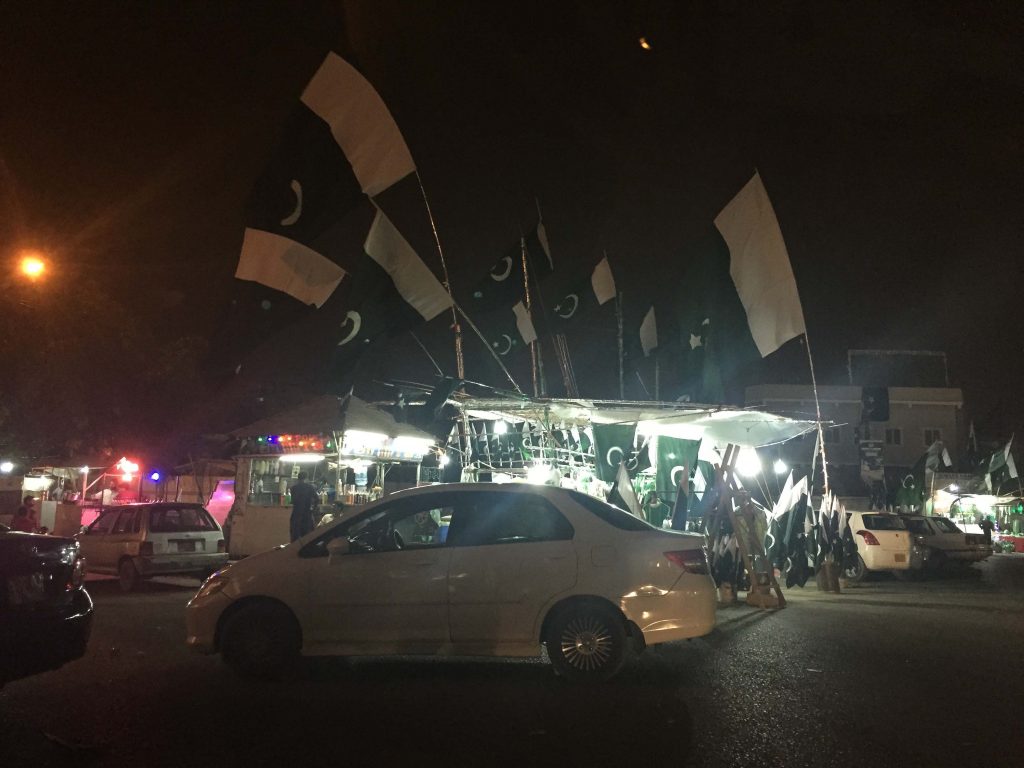 Still, some might apply for that erstwhile visa, if they have enough money for it in the first place. And when they don’t get it, they may use more creative means to make something more than a hundredth of a dollar every day.

They may follow my footpath, but in reverse, heading to the Old World from the East. They may undertake a journey of thousands of miles, barred by borders, marked by checkpoints, and find themselves in the waters of the Mediterranean Sea.

After all, what’s the worst that can happen when you’re in a trap? You might drown. But is it any worse than living and dying in a place where you can’t fulfill your potential?

*Image: Mural art at Chai Wala, an outdoor paratha restaurant in the Defence neighborhood of Karachi. >Photo via author.