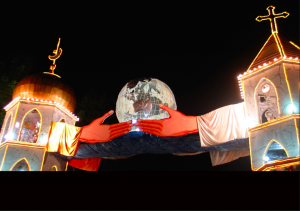 By Kevin Singer and Chris Stackaruk

A 2016 op-ed from the Huff Post [1] recently re-emerged after it was retweeted [2] by a renowned sociologist at Rice University, Dr. Craig Considine, who has a robust 53,000+ Twitter followers. The piece — written by Ian Mevorach, who identifies himself as a theologian, spiritual leader, and activist — argues that “peacemaking Christians” should accept Muhammad as the “Spirit of Truth” whom Jesus speaks of in John 14-16, effectively transforming Muhammad from historical figure to ultimate prophet in Christian theology. He argues this to be a solution to Christian Islamophobia: “Changing our view of Muhammad—so that we recognize him as a true prophet rather than discredit him as a false prophet—would effectively inoculate Christians against Islamophobia and would help to establish a new paradigm of cooperative Christian-Muslim relations.”

Mevorach rightly notes that some of the most revered Christian theologians in the history of the Church, including John of Damascus, Thomas Aquinas, Dante, Nicholas of Cusa, and Martin Luther, would find Mevorach’s conclusions deeply troubling. Yet, he feels that his argument will “transform the way Christians and Muslims see and relate to each other.”

We co-direct an organization, Neighborly Faith [3], that equips evangelical Christians to be good neighbors to people of other faiths—especially Muslims. Over the last four years, we have built an expansive network of everyday evangelicals and their leaders across many churches, colleges and vocations with which we promote Christian friendship with Muslims. Putting the theological cogency of Mevorach’s argument aside, we can say with assurance that his argument would not “make peace between our communities” as he proposes. In fact, we believe it does the very opposite.

Mevorach injects urgency into his argument by noting that “the majority of Christians still maintain a fundamentally Islamophobic position on Muhammad,” and that “our planet simply cannot afford another century of misunderstanding and violence between these two communities.” Yet, the issue with his argument is that he correlates Christian opinions about Muhammed with their feelings about Muslims.

His arguments demand that Christians overturn centuries of belief, which will not be remotely compelling to the Christians he describes. Rather, an argument like this only makes Christian-Muslim friendship more out of reach for most Christians, who are not willing to sacrifice core tenets of their faith.

We have unfortunately seen this habit among many progressive thinkers in North America and Europe who, from the best of intentions, wish to be bridgebuilders and peacemakers. Mevorach and others like him contrive expedient solutions to “the problem of belief,” but never take into consideration whether the people who presumably need to change would find their arguments compelling. Unfortunately this is the case for Mevorach’s essay: His solution is laughably idealistic.

After attempting to make the connection between the New Testament’s “Spirit of Truth” and Muhammad, Mevorach argues that “it is absurd for us to continue to see Muhammad as a heretical Christian or false prophet given that Islam has lasted for nearly 1,400 years, has supported monumental cultural, spiritual, artistic, political, moral, and intellectual achievements, and has a tremendous and vibrant global following.” These features of Islam are impressive if one is curating a museum on human civilization. Yet, Christian belief does not factor historical or cultural achievements as a source for ultimate truth.

Like Mevorach, we want to see Christians who dislike or fear Muslims change their ways. We want to see them become peacemakers and faithful ambassadors, as Jesus commands in Matthew 5:9 and the apostle Paul in 2 Corinthians 5:20. But asking them to first accept highly provocative claims that undermine orthodox Christian teachings is not the way to do it. First, this is difficult. Second, it is not necessary.

The Bible does not teach fear of Muslims or hatred of Muhammad. Rather, it teaches love of one’s neighbors (Matthew 12:30-31). Did Jesus Predict Muhammad? It doesn’t matter.

It is not necessary to drastically alter the Christian tradition to build peace between Muslims. Rather, we simply need to teach it better.