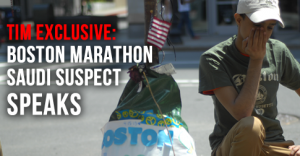 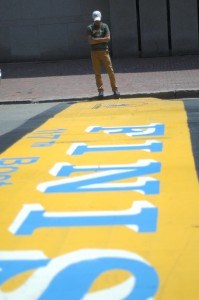 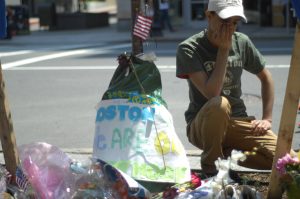 At 4:28 p.m. on Marathon Monday, less than two hours after the explosions, the New York Post [4] was the first to announce that this individual was “a suspect” and “under guard.” The same report also erroneously stated that authorities said 12 people had been killed and up to 50 injured. The facts were clearly not available, but the media seemed far too excited about the potential suspect to temper itself. That evening, CBS correspondent and former FBI associate director John Miller stated [5] that after the bombs went off, a spectator noticed that Alharbi was “acting suspiciously” and tackled him to the ground; other media reports continued this same narrative, citing these early, and what we now know to be erroneous, reports. 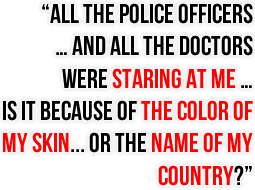 He was under guard and unable to communicate with any friends or family for the first 24 hours. His father, residing in Saudi Arabia, found out about his injury and subsequent questioning through Twitter. Abdulrahman remained cooperative with the FBI but reflects at his shock and confusion over how he was accused of the attack.

By Monday evening, the media discovered his full address and publicized it while filming the FBI search of his apartment. By early Tuesday, reports of his full name and photos from his Facebook account were circulated, some citing that it was first released by the conservative website Townhall [7]. However, we found that it was first reported by Fox News [8], citing an unnamed source who released Alharbi’s name to them.

With regards to the questioning, Alharbi says of the FBI that “I still don’t blame them to this moment” but when watching the media report about him within 24 hours of the bombing he reflected that at the time he said “but what [am I] going to do… after I [am] discharged from the hospital? It was very scary moment.” 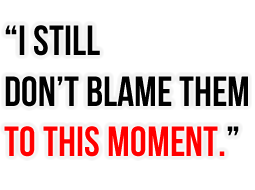 By the next day, it was clear that Alharbi was just a witness and among the injured. The Washington Post [10] and New York Daily News [11] exonerated him, and others soon followed, albeit with large photos of him published alongside their pieces. But the change in official status did not temper the media speculation. For days after he was discharged from the hospital media pundits incorrectly reported that he was put on a terrorist watch list and deported [12]. Other accusations were also made referencing his name appearing in google searches as proof of his links to terrorism or a larger US-Saudi conspiracy (note: on linkedin.com alone there are 26 professionals with the exact same first and last name spelling as Abdulrahman Alharbi). In response, Homeland Security Secretary Janet Napolitano stated [13] that Alharbi was at the wrong place at the wrong time. She confirmed that he was put on a terrorist watch list, but only while he was being questioned immediately after the bombing. When it was determined that he “had nothing to do with the bombings,” he was quickly removed from the list. “He was never a subject. He was never really a person of interest,” she said.

TIM could not confirm from the FBI whether he was ever officially detained in the hospital or what his official status was during questioning. We could also not confirm from the FBI if it is standard protocol to add a person’s name, without completing the investigation, to a terrorist watch list in these types of crimes, only to be removed hours later. Nonetheless, several members of the media continued to write uncorroborated stories, based simply on the fact that the FBI questioned him for hours and that he was temporarily placed on the watch list.

The many discrepancies between Alharbi’s story and what the media reported raise a number of unsettling questions. How exactly was the media given access to his full address and name? Is the FBI investigating this? Why is his official status as a suspect or person of interest or in custody still unclear?

When I called the FBI, I specifically inquired about Alharbi but the first contact drew a complete blank. “A Saudi national? I don’t recall there ever being a Saudi national.” But when I asked in what instance do the authorities release a person’s name in an investigation of this nature, they responded that, in compliance with the Privacy Act, they would release a name only if the public could be of help in the investigation. But it’s unclear how and when that determination may be made. The media was able to report about him less than two hours after the bombing. The FBI had not yet searched his apartment or questioned him in full, yet shortly thereafter the media had complete details about him: in name, residence and photos. The FBI did not officially release his name asking for the public’s help in specific reference to him, but as for what happened unofficially, we may never know.

Several media networks fueled intense feelings of animosity and hatred toward Alharbi specifically and Arabs and Muslims in general, including focusing on Obama and Saudi conspiracy theories. Immediately after the bombings, the New Yorker [14] and The Islamic Monthly [15] published a defense of this innocent man, but that was about it. Everywhere else, racist commentaries, analysis and continued speculations expanded, and the defense of Alharbi was all but forgotten.

Perhaps we have also forgotten Richard Jewell, the security guard who spotted and reported a suspicious bag in Atlanta during the 1996 Summer Olympics. Acting fast, he cordoned off crowds and saved many lives before the bomb went off. But a few days after the bombing, the FBI described Jewell as fitting the profile of a typical lone bomber who wanted to receive public attention. The Atlanta Journal-Constitution was the first to report that he was the bomber, and for months other media outlets maintained this description. While he was later exonerated, he found it difficult to live with the stigma [16] of that association, and he described the media “like piranha on a bleeding cow.” [17] No doubt, his universe was upended and he had a difficult time returning to a normal life, despite the fact that the Justice Department formally cleared his name. He died at the age of 44.

Today, we see Alharbi suffering the effects of sensationalist (and often-times racist) media reports, enough to disturb him and prevent him from moving back to his home and resuming his normal life. He told us he received many hate messages, including one that read “sorry to hear about the powder burns on your hands from the bombs your friends set off in Boston. Also sorry to hear our government is wanting to deport your a$$. I would love to see your neck get stretched by a good ole fashion rope.” 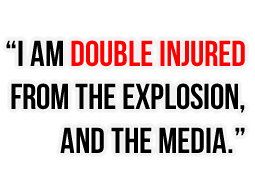 “I lost my privacy,” Alharbi said, adding “I am double injured from the explosion and the media.”

It is not clear, nor might it ever be, whether the FBI released his name. A nurse, doctor, custodian or anyone else in the hospital may have given his information to the press had they come across it from a chart or notepad lying around. But what is certain is that there were no reporters in the hospital, and within two hours of the bombing but before the FBI could conduct a proper search of Alharbi’s background, the media were learning a lot about him. What is also certain is that his name and ID were initially only with the FBI and authorities questioning him.

The point is that this could happen to anyone, at anytime for being at the wrong place at the wrong time, and looking the ‘wrong’ way. Given the Web’s permanence of information and the speed with which media can disseminate any information, however unverified, to drive its 24-hour news cycle, we must closely consider how we protect the innocent victims of these incidents, including people like Alharbi who was twice victimized through no fault of his own. He understood the importance of cooperating, but could not leave the hospital unidentified. The leak, regardless of where it came from, must be investigated and we must be sure this never happens again.