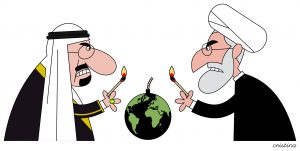 Intra-Sunni differences, constraints of the Iran-led Shia camp and the U.S. need to manage radical actors on both sides means that the geosectarian conflict in the Middle East will be brewing for decades to come. The Levantine-Mesopotamian landmass will be a long-term battlespace where neither rival camp will be able to overwhelm the other. Despite critical losses in Syria, the Shia camp will remain a regional power while the Sunni camp will long be struggling with the sectarian “other” as well as the “self.” 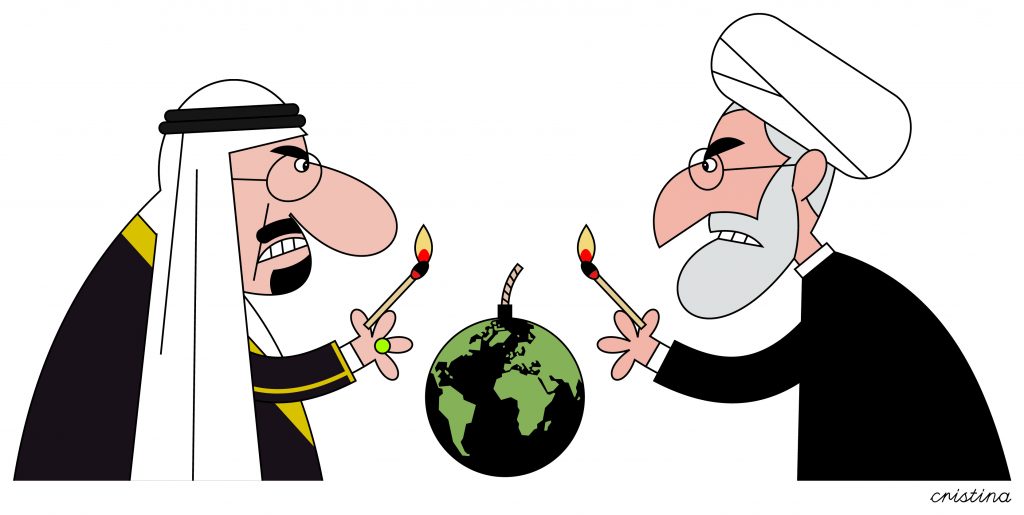 In three previous reports, I detailed the internal logic [2] within the Sunni [3] and Shia [4] camps. In this fourth report, I will discuss the impact of intra-Sunni competition and the demographic predicament of the Shia within the context of wider geopolitical dynamics. These two factors combined with an American imperative to re-create a regional balance of power will entrench two emerging realities that will be with us for the foreseeable future.

First is the conflict over the leadership of the Sunni-majority Middle East (and by extension the wider Muslim world), which involves not only states such as Saudi Arabia and Turkey, but more importantly, jihadist non-state actors, in particular the self-styled Islamic State. Second, despite its losses in Syria and Iraq, the Iran-led Shia camp has been hardwired into the regional fabric.

Let us examine this second aspect first. From a geosectarian point of view, the greater Middle East of today, in many ways, is similar to how it looked around the 11th century when the Shia Ismaili Fatimid caliphate ruled over North Africa, Levant and the Hejaz region of the Arabian Peninsula. The Fatimid expansion in great part was made possible because of the fragmentation of Sunnidom due to a number of factors, including the weakening of the main caliphate in the form of the Abbasid imperium, the existence of its rival caliphal polity in the Iberian Peninsula and the proliferation of multiple Turkic-Persianate emirates and sultanates all around the highly circumscribed Abbasid dominion based in Baghdad. The emergence of the Ayyubids led by the famous Saladin, followed by the Mamluks and finally the Ottomans rendered the Shia polity an exception to the general historical trend of Sunni dominance over the heart of the Muslim world.

For the next 500 years or so, the Shia did not manifest as a strategic power and it was not until the emergence of the (Persian) Safavid Empire at the dawn of the 16th century that the Shia revived geopolitically. However, the Safavids (who had officially embraced the mainstream Twelver Shia faith) found themselves sandwiched between two major Sunni powers: the Ottomans to the west and Mughals to the east. Since its eastern flank in what is modern-day Afghanistan did not offer much in the way of geopolitical dividends, the Safavid focus was toward the west in present-day Iraq, where it fought its main wars with the Ottomans. With the Levant and Mesopotamia firmly under their control, the Ottomans on occasion were able to push their imperial boundaries well into the northwestern Iranian region of Tabriz — thus blocking the Persian Shia empire from pushing into the largely Arab Sunni realm.

Fast-forward another almost half millennium and this balance of power has completely reversed itself. Despite the setbacks in Syria over the past four years, Iran continues to enjoy considerable influence in Iraq and Syria and is blocking Turkey from projecting power into the Arab world. In fact, the January 16 lifting of sanctions as part of a nuclear deal between Iran and six world powers — U.S., Russia, Britain, China, France and Germany — underscores that Tehran will be a major player in the years and decades ahead. For the first time since the fall of the Fatimid caliphate, the Shia have experienced a historic resurgence in the Arab world. While having reached the zenith of its influence and now staring at reversals, the Iran-led Shia camp is unlikely to meet the same fate as the Fatimids.

First, the Fatimids were not mainstream Twelver Shia and therefore were a minority within a minority. Second, the Fatimid core was in North Africa, which has traditionally been Sunni and thus could not maintain itself much less continue to project power into the heart of the Middle East. It was thus only a matter of time that Sunni power revived and ultimately converged in the form of the Ottomans. In contrast, today, Shia power is spearheaded by mainstream Twelvers and its locus is Iran — a Persian state that is secure within its borders. Third, democratic politics has allowed pro-Iranian Shia to achieve a dominant position in Iraq and Lebanon, where significant minorities (Christians and Kurds) are also partners of Tehran.

On the Sunni side of the geosectarian divide, Turkey is constrained by a number of internal and external factors and faces unprecedented competition from an alliance of players on the Arabian Peninsula, led by Saudi Arabia. Recent Russian intervention in Syria has created an added obstacle for the Turkish imperative to manage its southern flank. Recall that during the Ottoman era, there was no Arab power that could challenge the Turks vis-à-vis Sunni leadership.

The rise of insurrectionist non-state actors further undermines the ability of the majority sect to push Iran back into its Persian home world. If anything, the rise of transnational jihadism has Iranian/Shia interests converging with those of the Americans and wider international community, which makes it even more difficult for Tehran’s opponents to contain its rise. There is a reason why despite being the numerical majority, having massive financial muscles and strong international standing, Saudi Arabia and its Arab allies appear extremely fearful of Iran’s international rehabilitation via the nuclear agreement. It is hardly a coincidence that Saudi Arabia decided to escalate matters with Iran by executing a prominent dissident Shia cleric in early January and snapping diplomatic ties — merely days before the sanctions on Iran were lifted. Saudi Arabia’s behavior is a direct result of the vulnerability it feels given the United States’ move toward a détente with the clerical regime in Tehran.

The core argument that Washington has been making to Saudi Arabia and its Arab allies is that the best way to ensure that Tehran does not threaten the region is by engaging and locking it within international diplomatic structures. From the Obama administration’s point of view, this strategy will likely suffice; besides, the United States seeks a balance of power to manage an increasingly chaotic Middle East. But as far as the Arabs are concerned, Iran, while under sanctions, was already a very subversive force. When unencumbered, it will have far more bandwidth to exploit weaknesses in the Arab world. As for the balance of power, that is exactly what Saudi Arabia et al. do not want because such a policy means Americans recognize Iran as a stakeholder in an increasingly weak and incoherent Arab world. It is important to note that while Arabs see Iran as a major threat, they are also quite concerned with the encroachment of Turkey. Saudi Arabia and its allies are well aware that the Turks’ willingness to tactically align with them to topple Bashar Assad’s regime in Syria is a means to create a launchpad for expanding Turkey’s footprint in the region.

All these factors will not allow the Sunni side to roll back Iranian/Shia regional influence in the foreseeable future. However, Sunni incoherence is only one side of the equation of geosectarianism. Iran and the Shia may hold their ground, but they are unlikely to expand. Shia geopolitical power has more or less ceased to grow; in fact it’s seeing a decline with the acute weakening of the Alawite state in Syria and the increasing problems faced by Haider al-Abadi’s government in Iraq, particularly given the sharp collapse in oil prices. If Damascus falls and the Alawite-dominated state is reduced to the status of a non-state actor fighting in Syria, Iran et al. will have suffered a key blow.

That said, the loss of Iran/Shia should not be mistaken as a gain for its opponents. Put differently, we will witness regime collapse, not change. Barring a negotiated regime-change (which is excruciatingly difficult to realize given geosectarian polarity), it is very likely that there won’t be a Syrian regime for years to come. A key reason for this is that the remnants of what we now call the regime’s military, backed by Hezbollah and Iran along with Shia fighters mobilized from across many Muslim majority countries, will not go quietly into the night. They will likely devolve into an insurgent movement designed to prevent an assortment of Sunni militias (most of whom are of one Salafist-jihadist persuasion or another) from establishing a new order in which minorities fear not just loss of sovereignty, but genocide as well. Should various rebel factions take Damascus, they will begin to turn their weapons on one another for power — similar to what happened to the mujahedeen alliance in Afghanistan circa 1992 after it toppled the Marxist stratocracy. In many ways, this is already happening with rebels fighting Daesh and Jabhat al-Nusrah’s alignment with various nationalist jihadist groups, in particular Ahrar al-Sham — thus exacerbating the battlespace complexity. Various militias are highly unlikely to find a way to share power with their various patrons (Turkey, Saudi Arabia, Qatar, United Arab Emirates and Jordan) as they have competing interests that will aggravate the matter even further.

Given all these factors, the war in Syria is likely to get far worse in the months and years ahead. There is already a significant spillover effect in each of its four bordering countries. Turkey and Jordan, to varying degrees, will not be able to escape deteriorating security situations. Iraq and Lebanon (the former more so than the latter) are already in great turmoil; however, their demographic makeup, which favors the Iran-led Shia camp, will serve as an arrestor limiting the spread of violence. The outcome of this convoluted conflict will be a long-term stalemate in which the two sectarian camps will be alternately delivering damaging blows, but neither being able to deliver a knock-out punch.

The greatest risk of this is that while these two camps will be exhausting each other, transnational jihadists (Daesh, al-Qaida and/or some third new force) will be exploiting this geosectarian struggle. The jihadism factor, though a threat to the Shia camp, is also an opportunity that will be exploited by Iran, which will also be focused on reviving its domestic and international positions in the wake of the nuclear deal. Meanwhile, transnational jihadist forces will be taking advantage of the geosectarian struggle as well as existing intra-Sunni rivalries to try and expand their tentacles in the Arab Sunni world.

The one military force that can degrade and even destroy Daesh belongs to Turkey, but Ankara has yet to step up to the plate. For the Turks, Kurdish separatism in Turkey and Syria is an immediate threat that must be dealt with. That said, Turkey cannot afford to ignore the fire burning on its southern flank and now spilling over into its territory in the form of Daesh attacks. Therefore at some point and regardless of its subjective preferences, objective geopolitical realities will draw Turkey into Syria, where the Turks will have to deal with Iran and Russia, which seek to preserve as much of the Syrian regime as possible, and with Saudi Arabia, which does not want to roll back Iranian influence in the region at the cost of empowering the Turks.