If you’re in a relationship with Facebook like I am (almost nine years, baby!) and your friends list consists primarily of MSA buds, taraweeh teams, the masjid gossip brigade and all those others who fall into some form of the Muslim crevice of society, then you’re probably more than familiar with all those images/quotes/anecdotes that promote the ‘right hijab’. You know what I’m talking about right? Those pictures that provide lollipops and pearls as parallels to the Muslim female body; those unauthenticated-yet-so-perfectly-pontificated anecdotes about conversations between Muslims and non-Muslims; those prayers for guiding ‘sisters’ towards the ‘right path of hijab’.

Imagine my surprised delight then when I noticed images like this [1]and this [2] popping up in my Facebook newsfeed. For the first time, I was seeing those very analogies, anecdotes and written prayers [3] that had long been directed at me – a Muslim woman – being directed, even if satirically, at my male co-religionists. While I was blessed to have been raised in a home where the principle of modesty in dress, action and gaze was emphasized equally for men and women, I still grew up knowing in that way we often know through peripheral observations that the community expectations of dress for both men and women were wholly different. The key difference and result of these expectations is that for women when it comes to wearing the hijab,  her spiritual center is made reliant on the headscarf. A Muslim woman’s beauty is in her hijab because it is apparently the best way she can show devotion to her Rabb.

Not her prayer, not her adab, not her character, not her knowledge, not her perseverance through her struggles and not her imaan and her tawakkul. We seem to conflate all of these with what she wears instead of focusing on her. In this ironic sense, we end up objectifying her as a pearl, a lollipop: incapable of anything else but being consumed, looking (tasting? ugh #haramadan) beautiful and necessitating ‘protection’.

We don’t speak of the faith of the Mothers of the Believers (RA), daughters (RA) of the Prophet (S) or Maryam (AS) in terms of their dress – instead we focus on their character, their personalities, their contributions, their faith, their trials and tribulations, their revolutions. We never say that what made these women great women – great Muslim women – is that they covered themselves. Their greatness and devotion to God does not hinge on what they wore. This is not to say their dress did not matter – but it is to say that they weren’t what they wore and we don’t make them into what they wore.

So why are we turning the women of our faith into what they wear?

None of this is to, of course, lessen the position of the khimar in Islamic law. Islam has normativities (I know, everyone 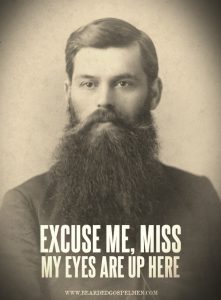 [4]freak out right now) and while we can disagree with the normativities, it doesn’t mean they’re not there. The thing is, if we want to talk fiqh, then let’s talk fiqh – because men, too, have legal obligations when it comes to what they wear and how they wear it, including their beards [5] – which are fardh (albeit with some difference of opinion) in all the five schools of jurisprudence, with Shafi’i having some leniency on shaving (makruh as opposed to haraam, but there’s also ikhtilaf). But we just don’t have that same emotional and religious investment in the requirements of modesty for men. If we did, as some of you most likely will try to argue, the discourse on Muslim men and women’s clothing wouldn’t be so radically different.

In fact, the discourse on Muslim men’s dress would be, well, existent.

Hijab4Men is hilarious but it should, at the end of the day, make you uncomfortable. If you think it’s making fun of Islamic jurisprudence or the Sunnah – you’re right. But you’re only right insofar as you understand that those reminders directed at the “sisters”, from which Hijab4Men borrows near verbatim, are no less offensive. Hijab4Men isn’t what’s offensive. It’s that language that treats us women like infants, the language that reduces our faith, practice, identity and existence to what is ultimately part and parcel of our faith – it is not our faith.