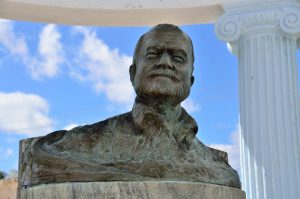 “Papa was a rolling stone. Wherever he laid his hat was his home.” —The Temptations

When Ernesto “Papa” Hemingway “laid his hat” in Cuba, it became his “home” for over 20 years. I needed to know why.

I grew up in the 1950s, the child of upper-middle-class parents who had master’s degrees and were accomplished educators. Life was simple then. We had a total of three TV stations, all of which signed off at midnight. There were no computers, cell phones or tablets, so the entertainment options for a child were limited. The 1950s version of the smart phone arrived in our house when the rotary dial on the phone was replaced by a mechanical keypad. Our home was stocked from floor to ceiling with books, and this is where most of my time outside school was spent. My lifelong habit of reading 50 books per year can clearly be traced back to this. I was introduced early to the great authors of the day including William Faulkner, F. Scott Fitzgerald, Norman Mailer, James Michener, John Steinbeck, J.D. Salinger and many others, but my love for the works of Hemingway reigned supreme. He was the “Big Bopper” of literature. By the time I was 16, I had consumed his entire catalog at least twice. I have circled back many more times in the years that followed. With the fullness of time, more about this man’s talent, genius and personality have been revealed to me. He was a figure of enormous brilliance and wisdom, and the man of his day in so many ways.

When traveling, I like to visit the homes and final resting places of great statesmen, artists, philosophers, writers, musicians and scientists. In doing so, more of the person is revealed to me. I have done this with Winston Churchill, Lyndon Johnson, Vincent Van Gogh, William Butler Yeats, and dozens of others whom I admire. Following Hemingway has been in my sights since I retired. I have done extensive research on this enigmatic man and the more I learned, the more I yearned to know. I set my sights on Europe and found that to visit Hemingway’s many dwellings there is not possible, as most of these are now private residences. I moved on, only to find that his final home in Ketchum, Idaho is closed to the public. I was discouraged, but perhaps this was for the better, as Papa was not happy in Ketchum, being neither physically nor mentally sound during this final period of his life. He had lost his writing genius and was painfully aware of this. He had always seen life as a losing battle, and this theme is central in almost all his writings. He had become one of his own characters.

No writer is an endless well, and Papa’s well had run dry. The joy of writing had become a struggle. In A Moveable Feast, he wrote, “Do not worry. You have always written before and you will write now. All you have to do is write one true sentence.” He no longer could do so. According to Mary Hemingway, his wife at the time, Ernest completed A Moveable Feast in the fall of 1960. This is perhaps quite telling as his own final chapter transpired in July 1961 when he fired a shotgun into his mouth. In Ketchum, Hemingway was clearly not a happy man. I would not find what I was searching for there.

I decided to visit his Key West home of eight years. For $14, you can get a 30-minute guided tour that is well worthwhile. It was in Key West that Hemingway was prolific and wrote many of his great novels, including To Have and Have Not, A Farewell to Arms and The Snows of Kilimanjaro. Hemingway’s personal tastes are visible throughout the house, including furniture purchased in Europe by then-Mrs. H., and Ernest’s animal trophies and skins from African safaris and hunting outings. Yet to my dismay, and for reasons that I cannot explain, I did not feel Papa’s presence here, even in the studio where much of his genius flourished. It felt like a museum, not a home. Papa’s spirit had long since “left the building.” I was disappointed, but not discouraged. I knew in my heart that the spirit and genius of this man was still with us, even 56 years after his death.

Cuba was my next and final stop. I was aware of how much Hemingway loved Cuba and its people, as well as their love and admiration of him. I was sure I would find Papa’s spirit here. Hemingway did not go directly to Key West from Paris, but arrived by way of Havana. He felt a deep affection for Cuba, and returned there after his time in America. In the small fishing village of Cojimar just outside Havana, Hemingway spent his mornings beginning at sunrise working on what are among his greatest works, including A Moveable Feast, Islands in the Stream and The Old Man and the Sea. Cuba provided the inspiration, Papa’s genius did the rest. 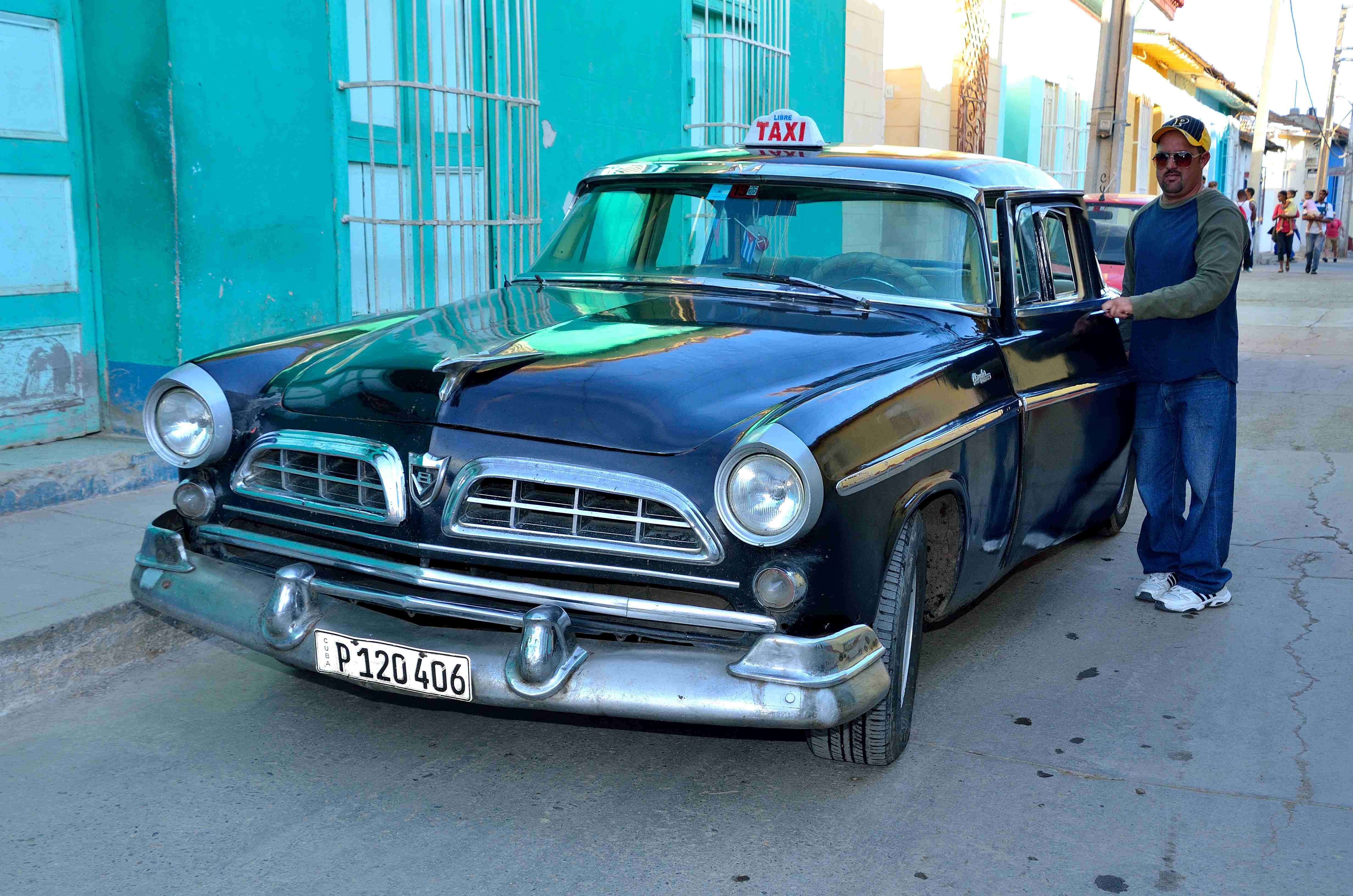 [1]
The 1955 Chrysler New Yorker that the author rode to Hemingway’s house in. 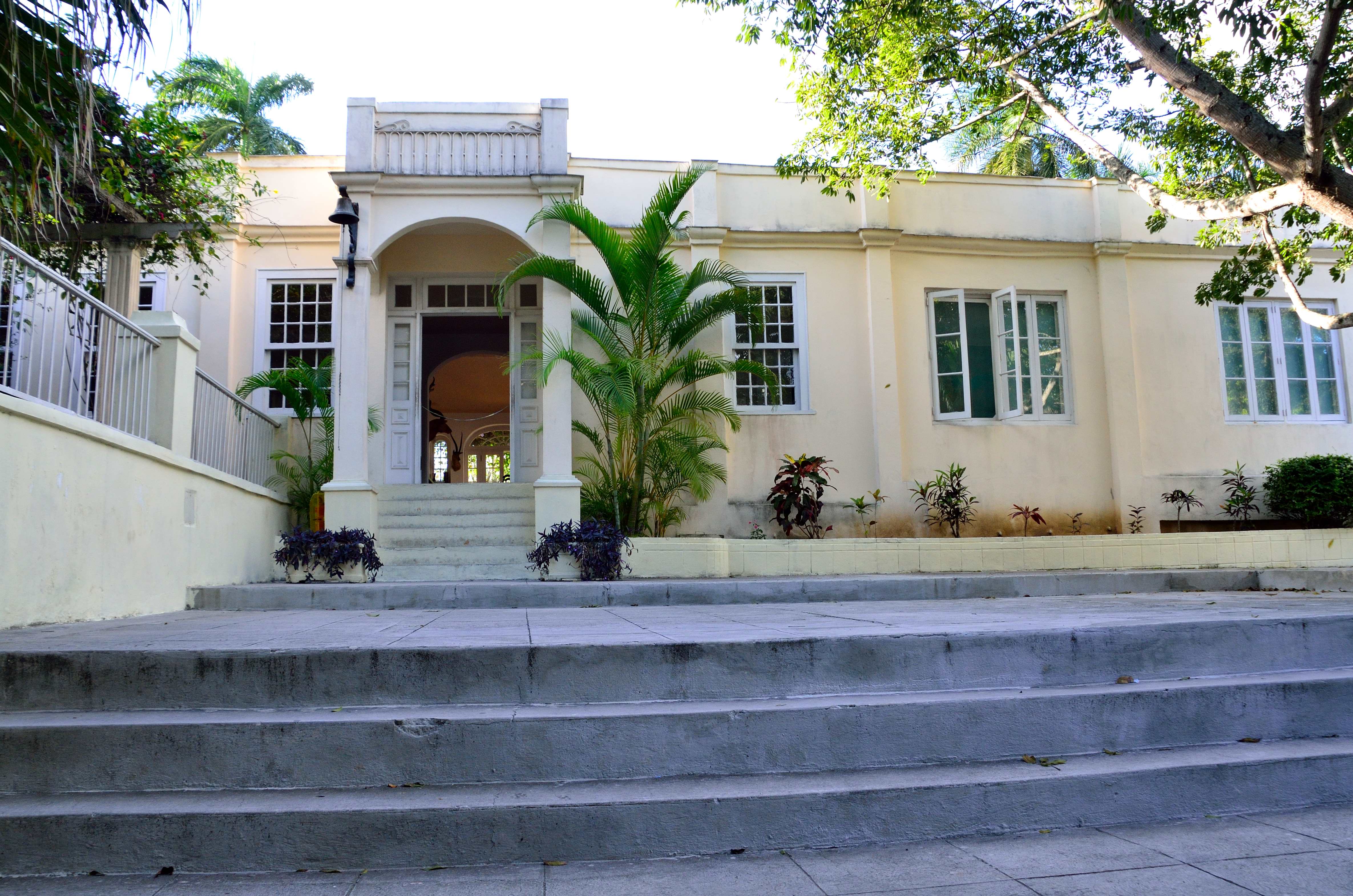 [2]
The front entrance to the house (Finca Vigia). 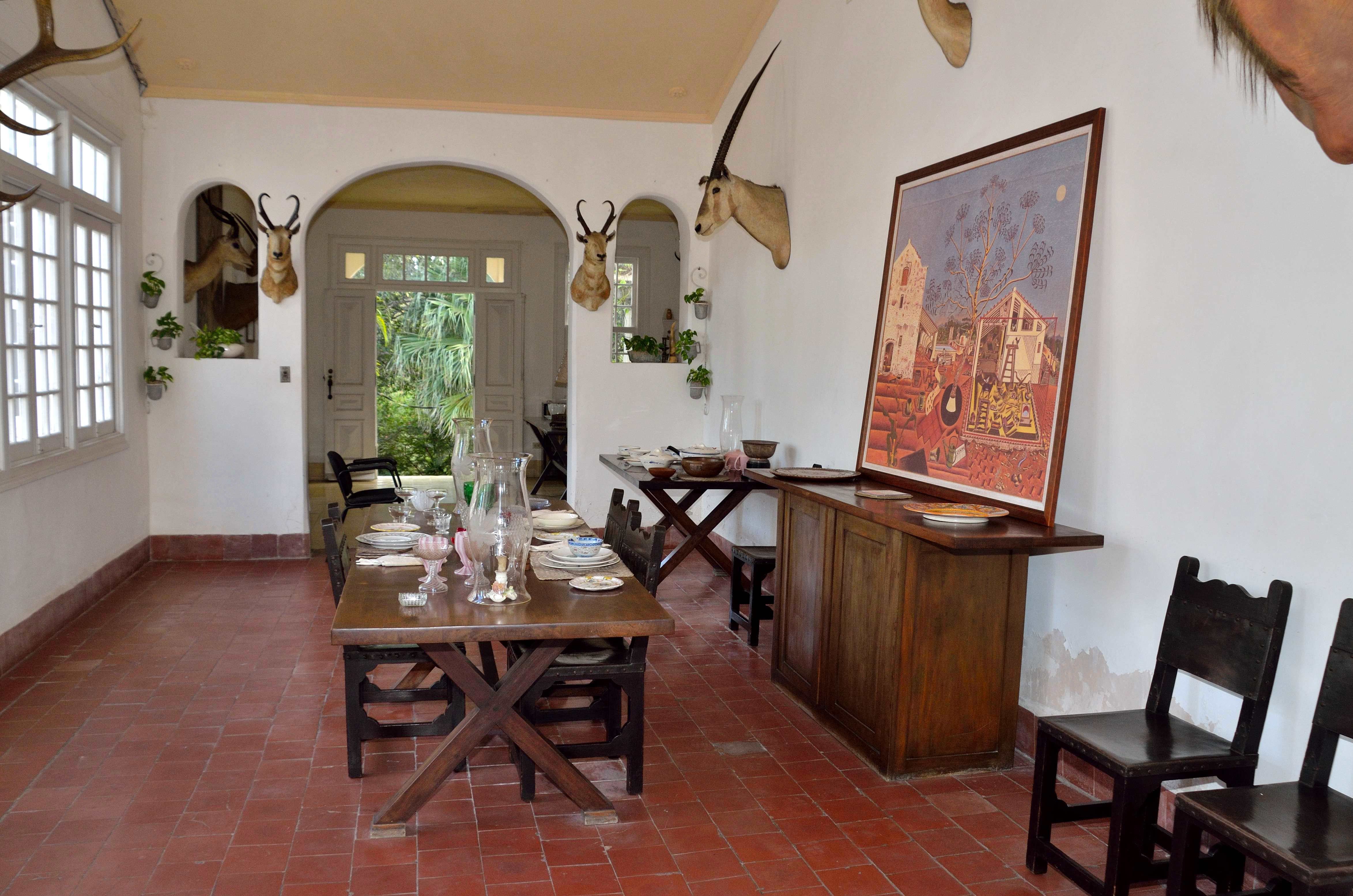 [3]
Inside the dining area in the main house. 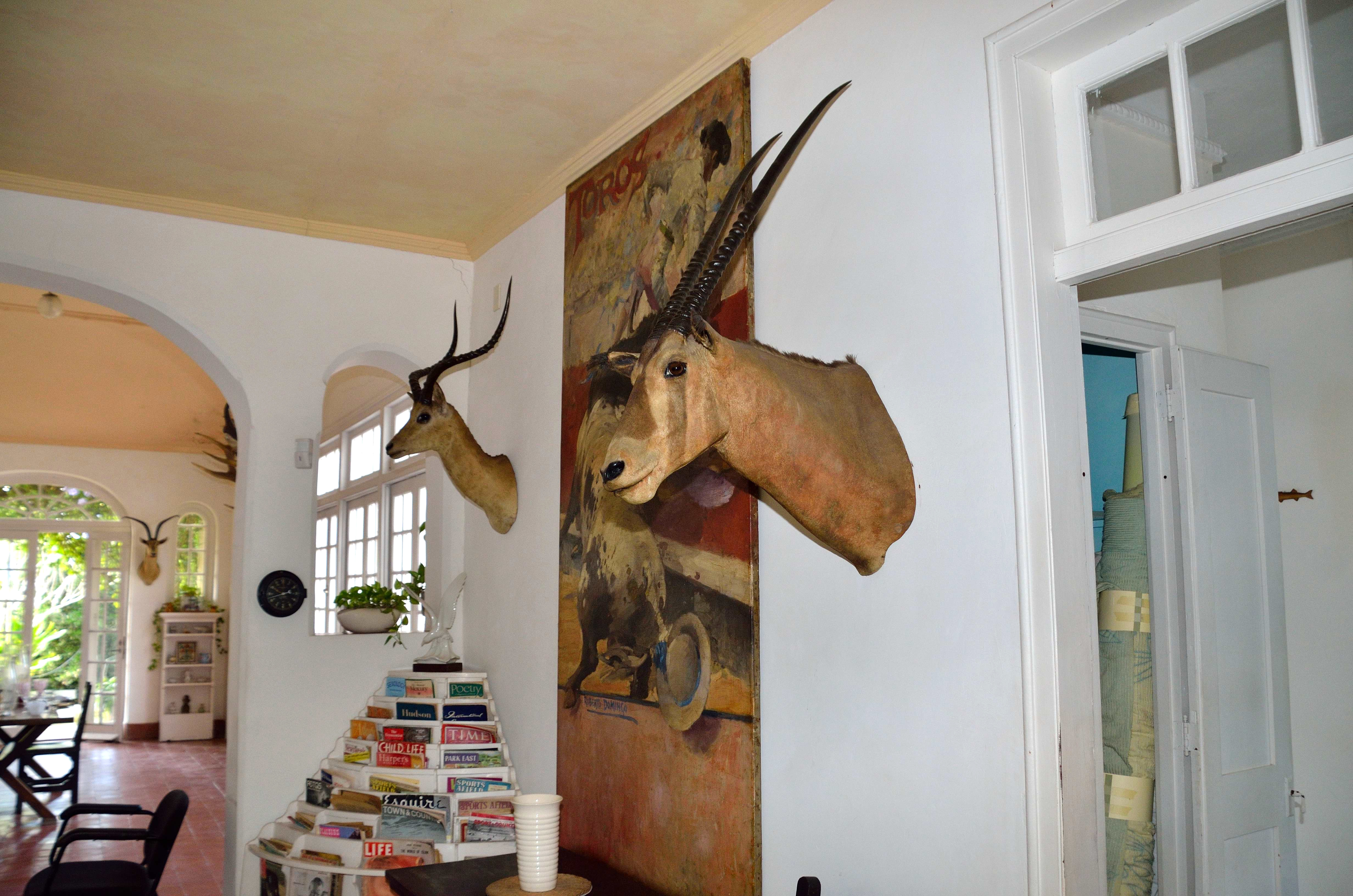 [4]
Hemingway loved to display his talent for hunting. 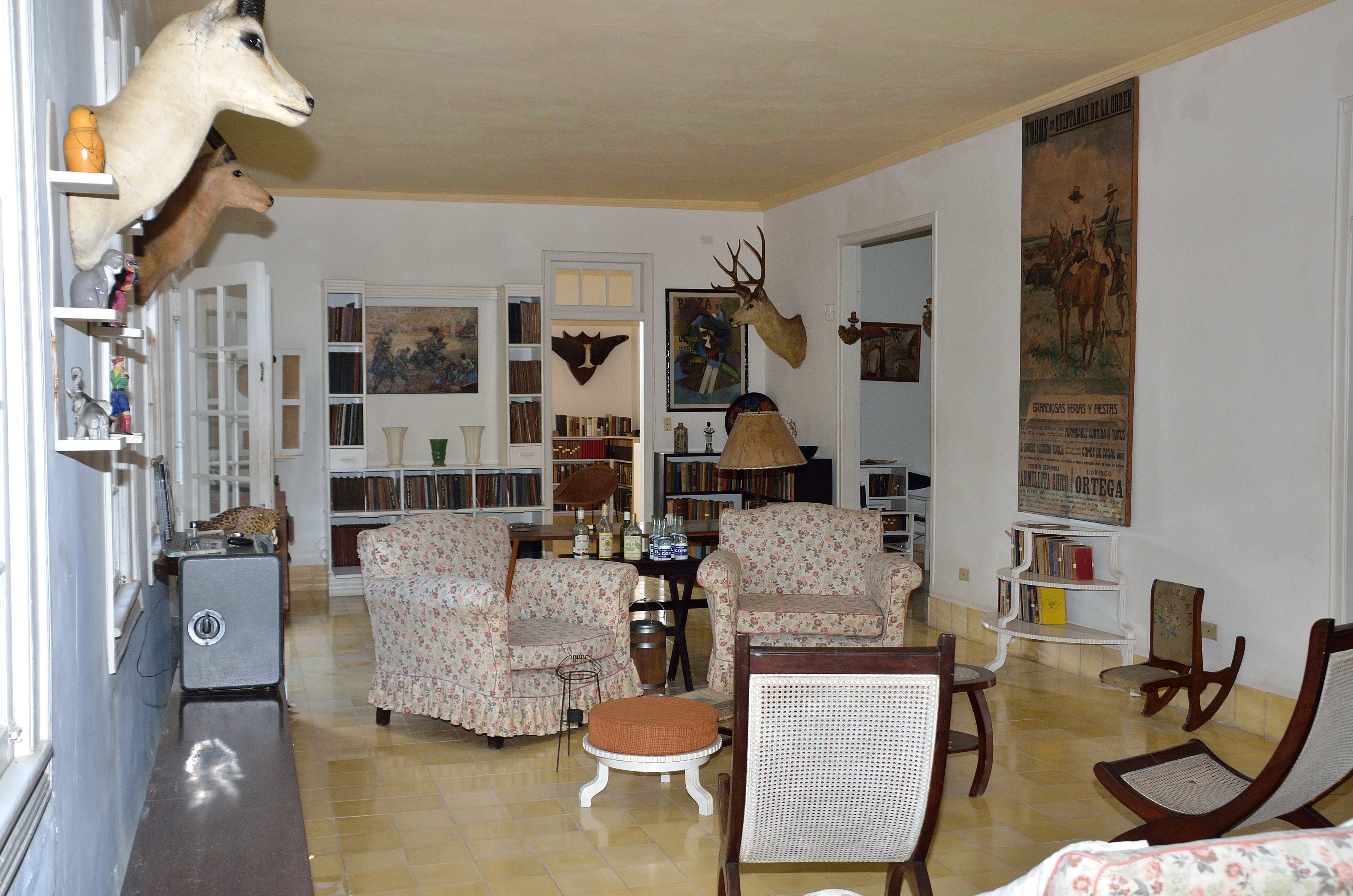 [5]
A sitting area in the main house. 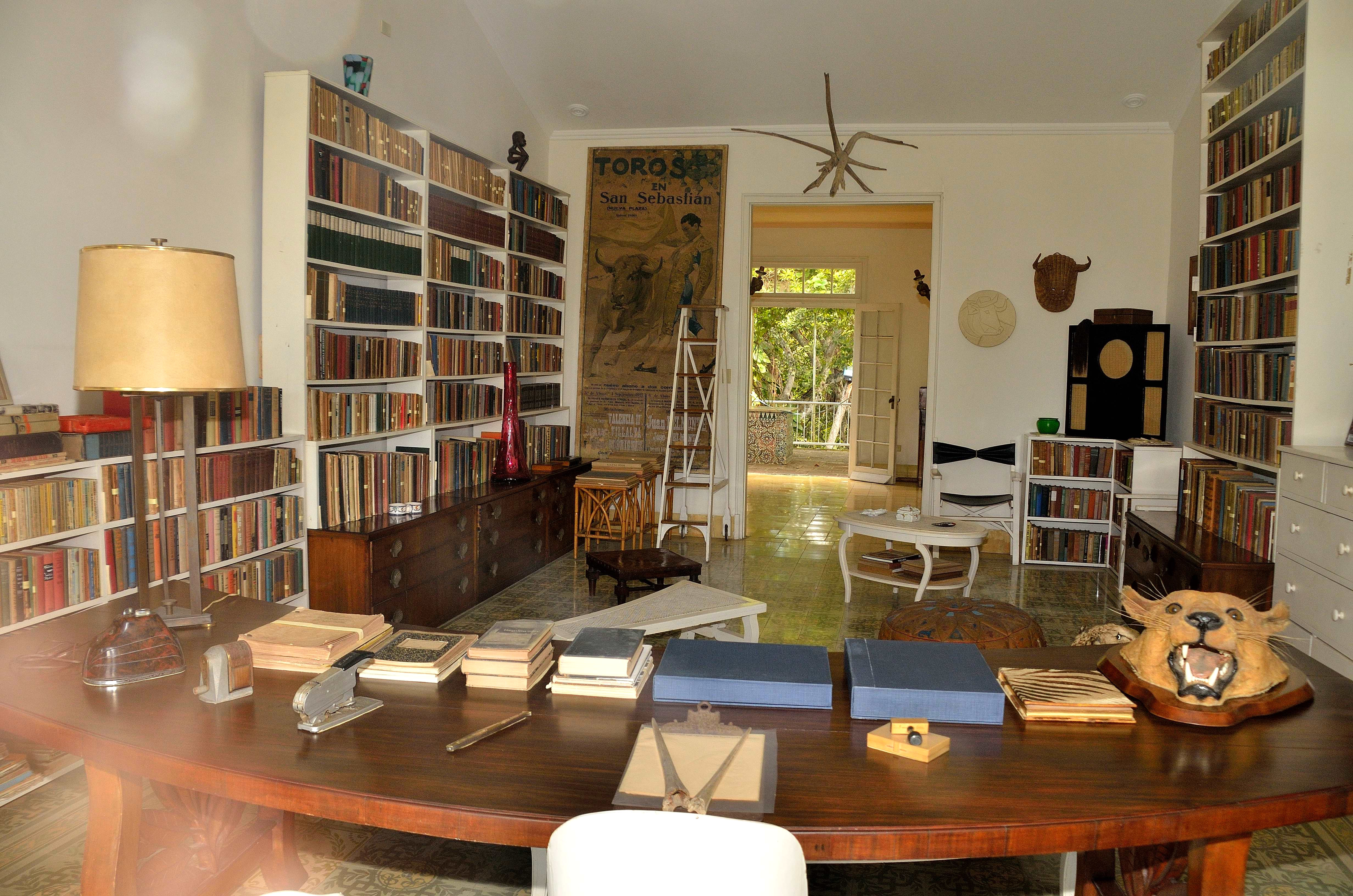 [6]
His office displays an impressive desk and books upon books. 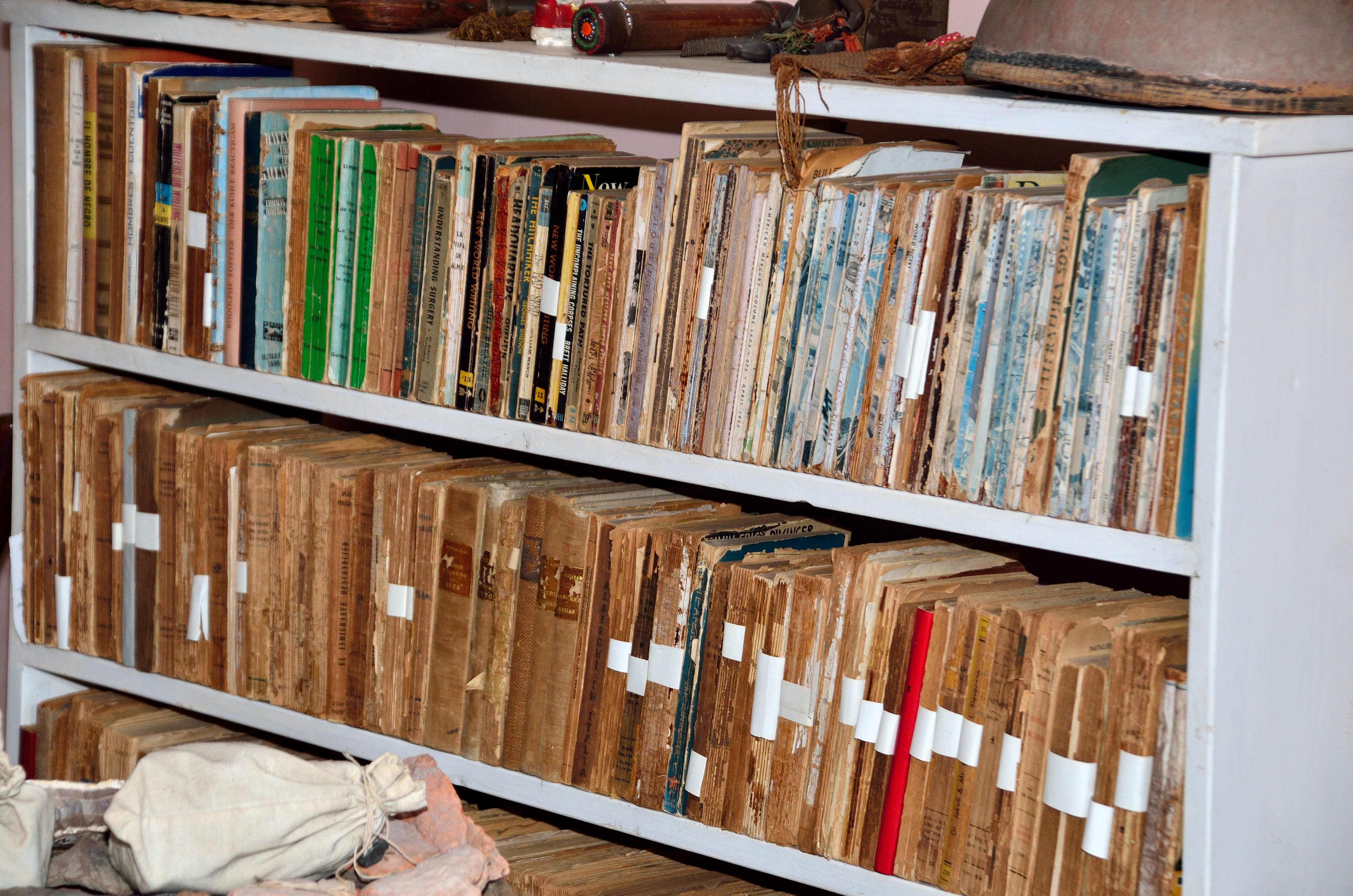 [7]
Hemingway’s impressive book collection can be seen throughout the house. 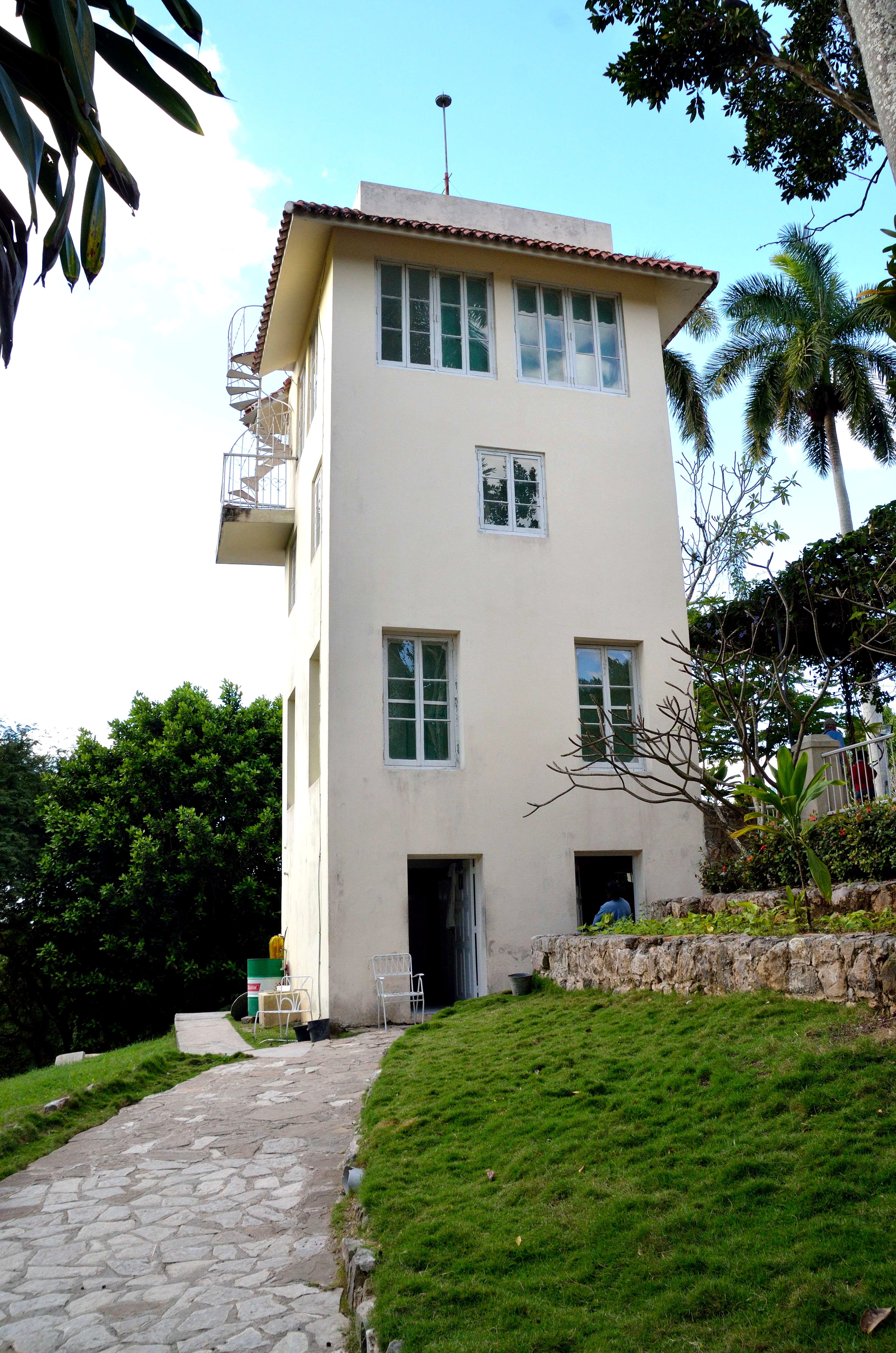 [8]
The writing studio in the tower overlooking Havana. Some of the world’s greatest novels began here. 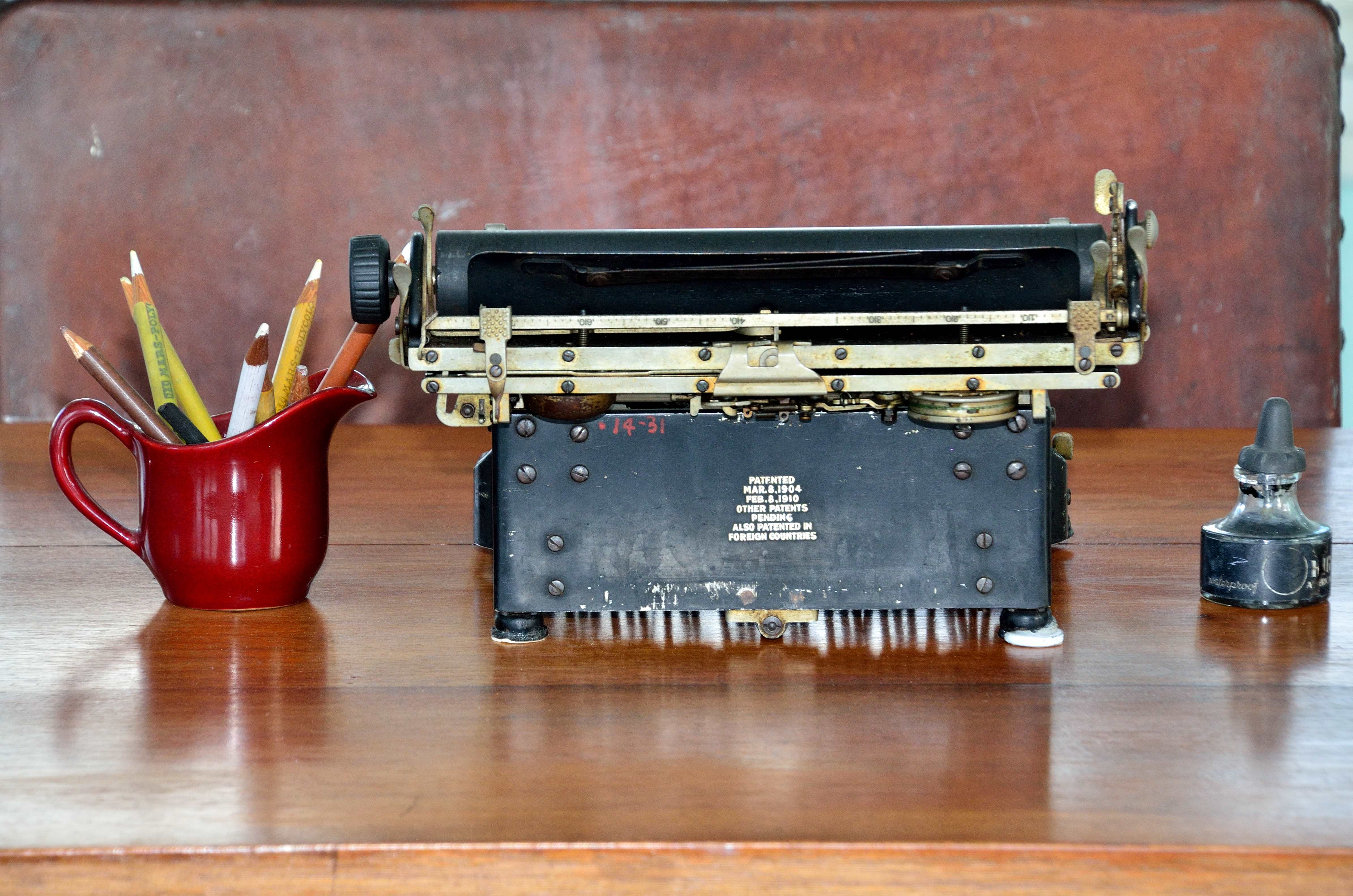 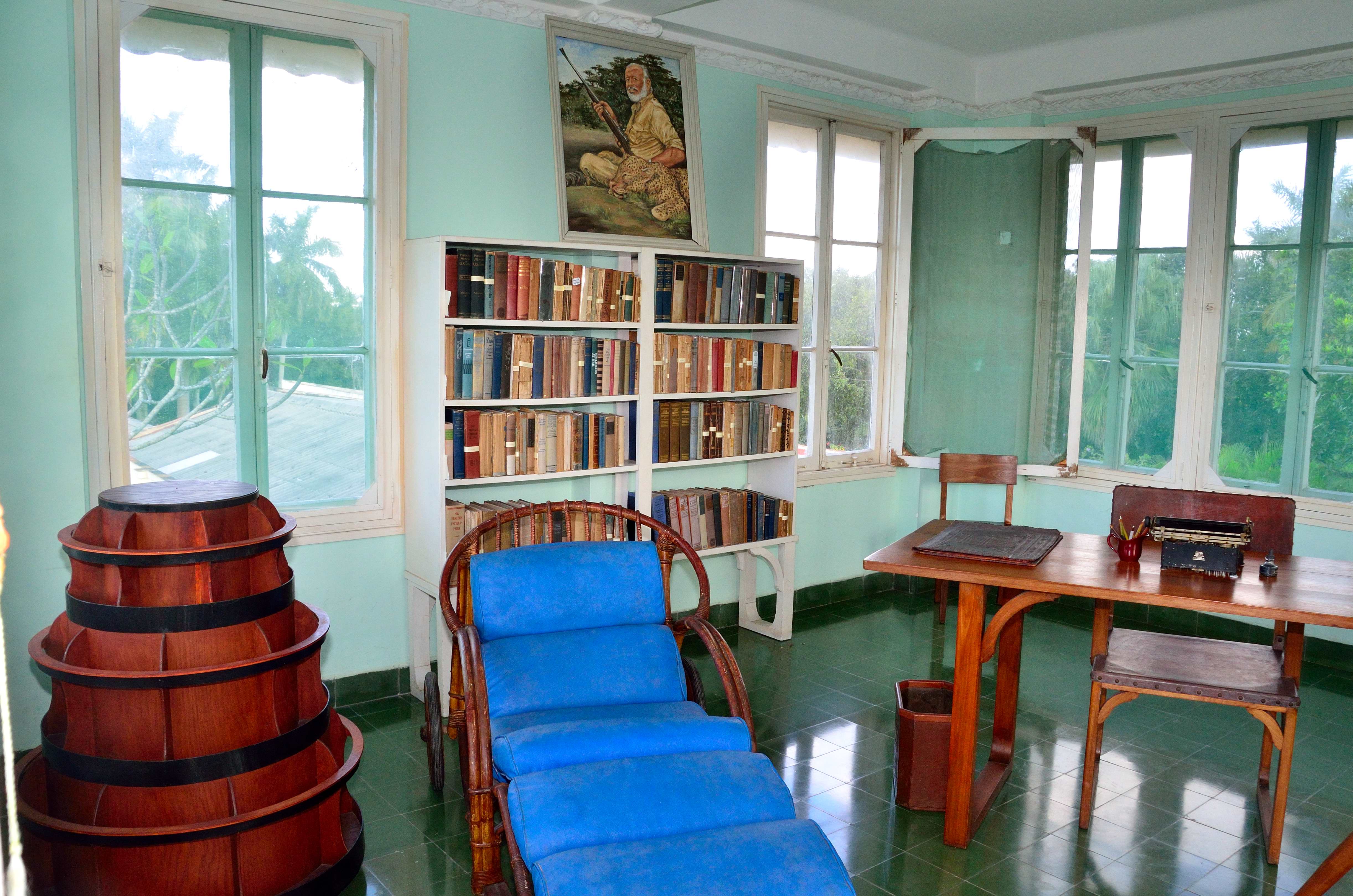 [10]
Inside his writing studio. 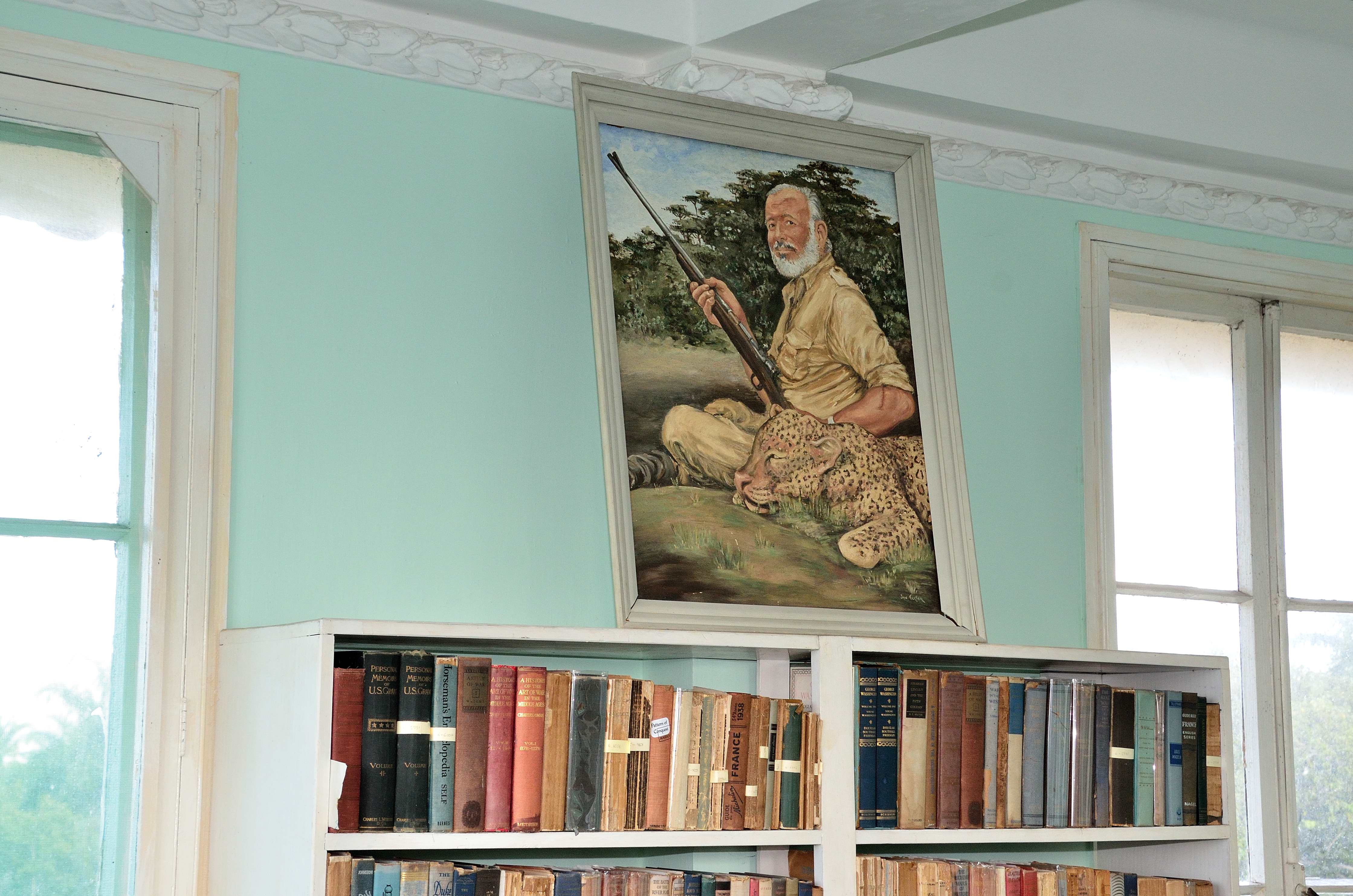 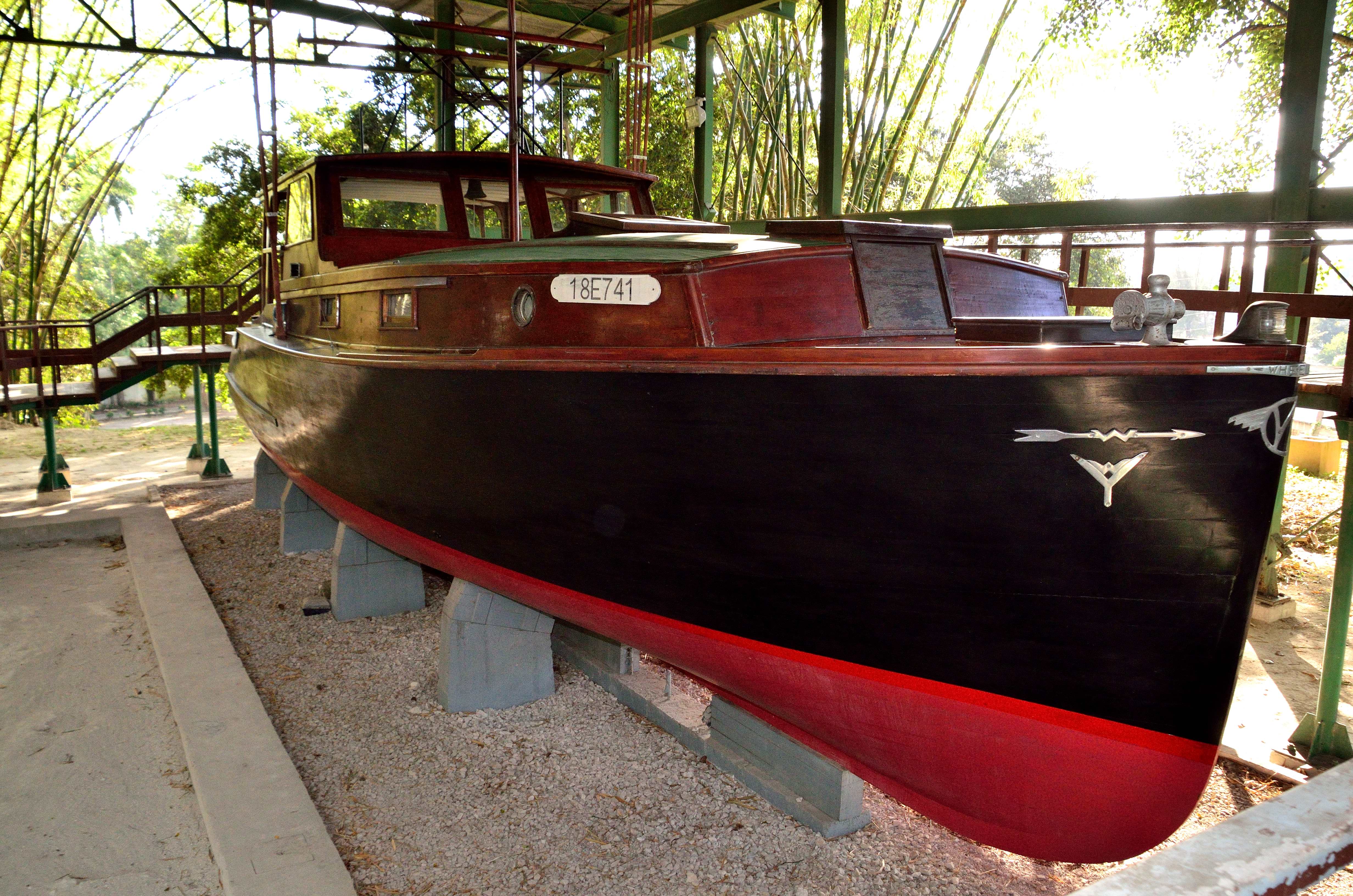 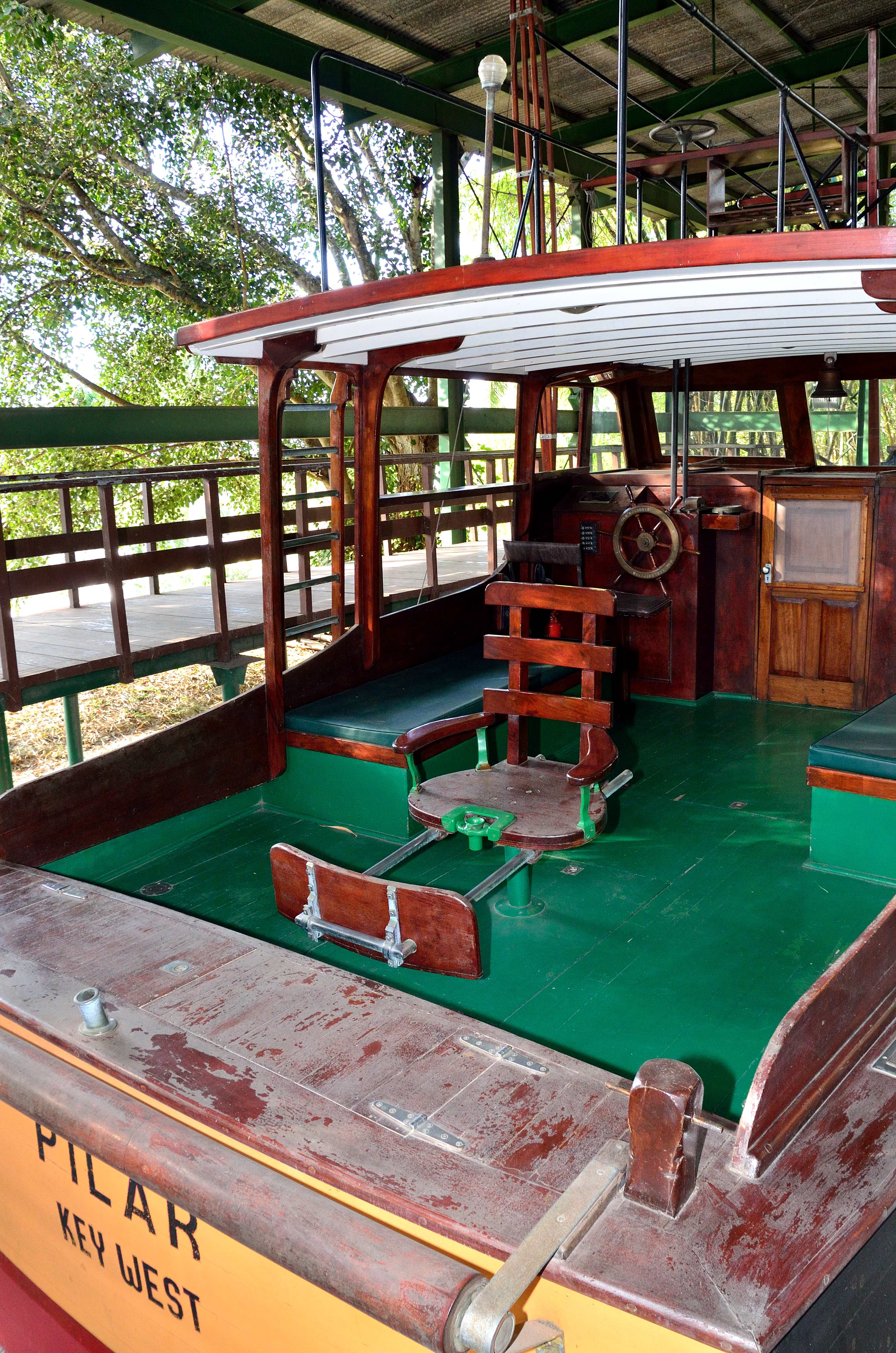 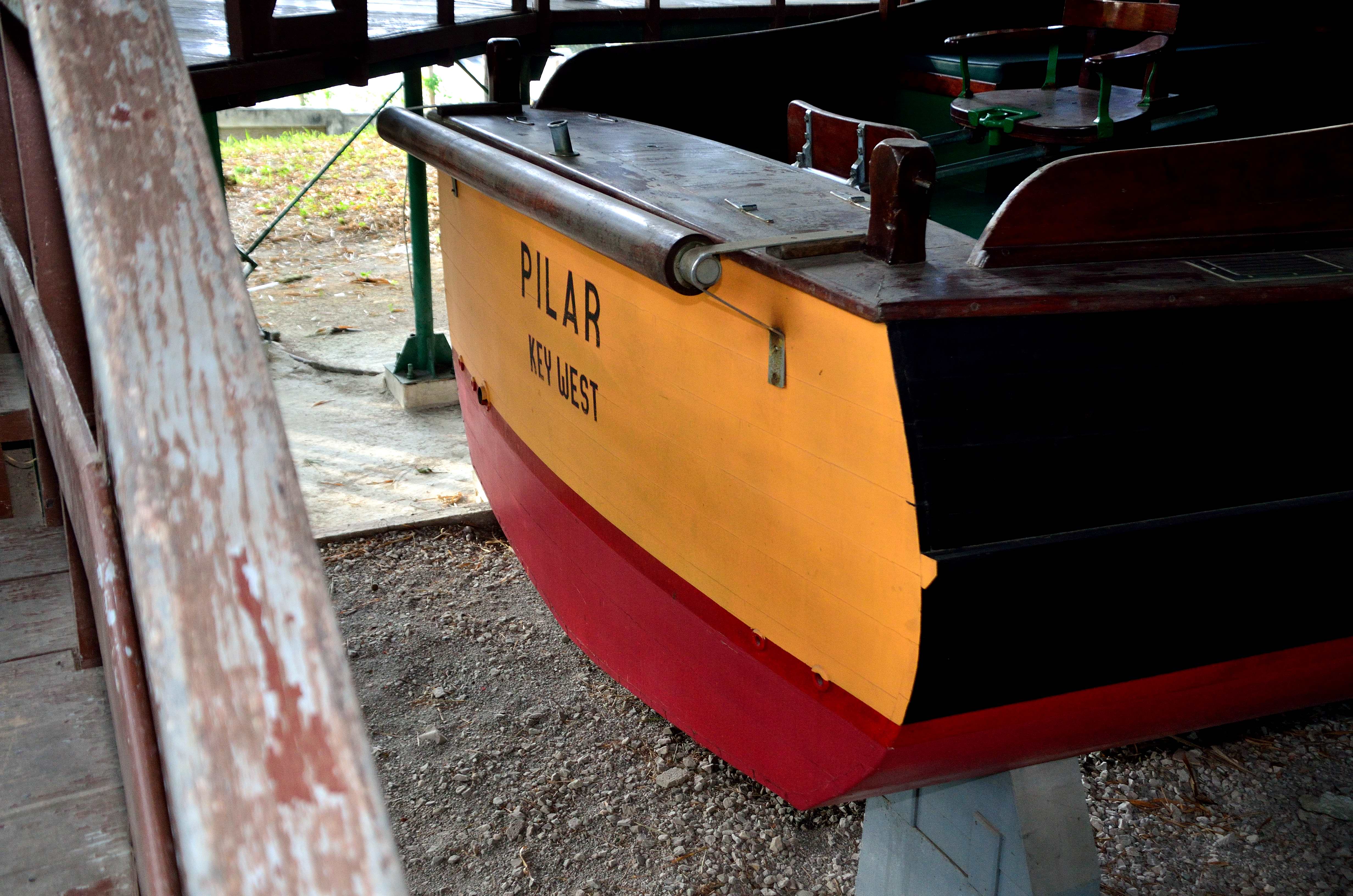 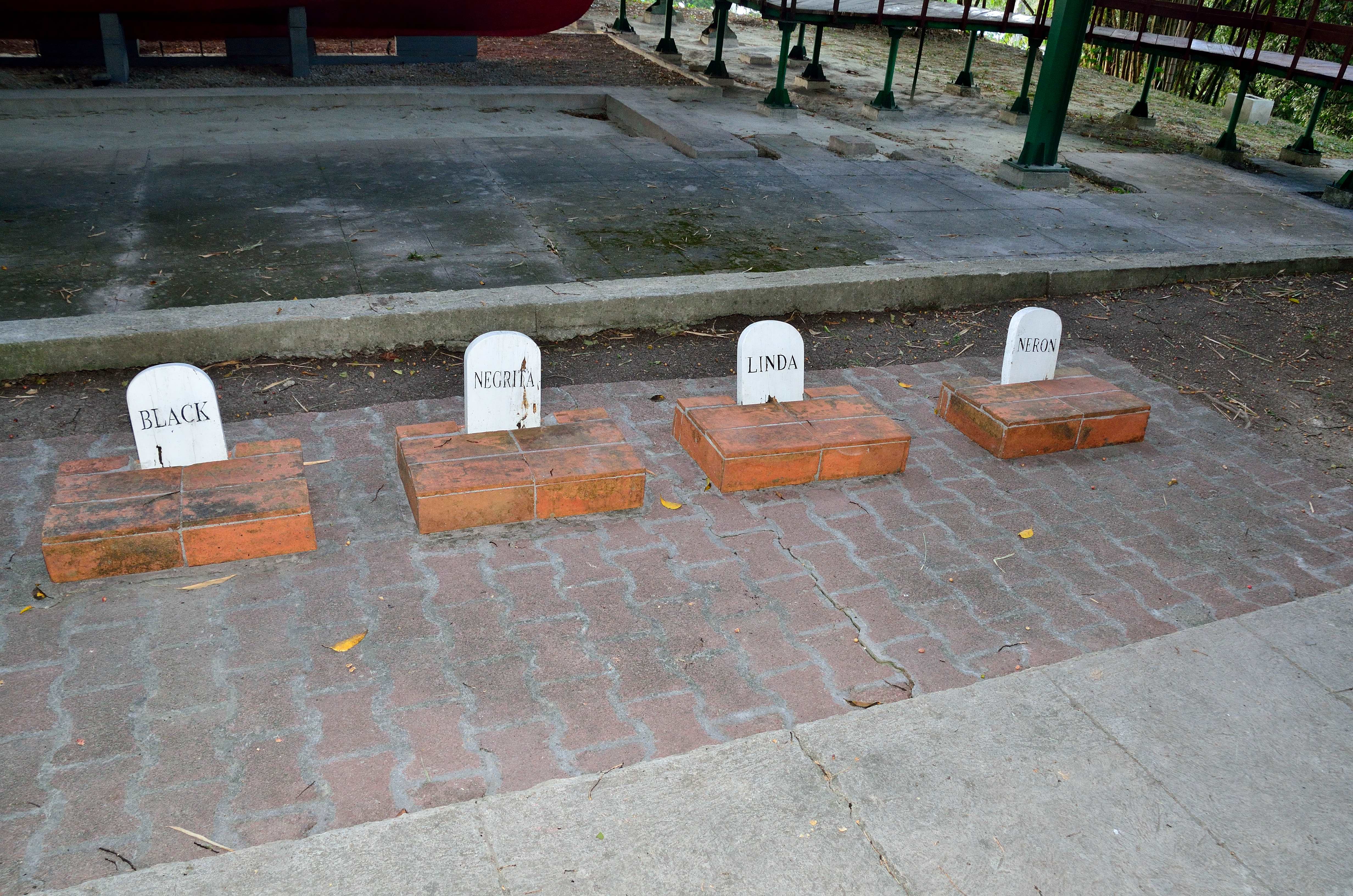 [15]
The burial plots and headstones of his four beloved cats. 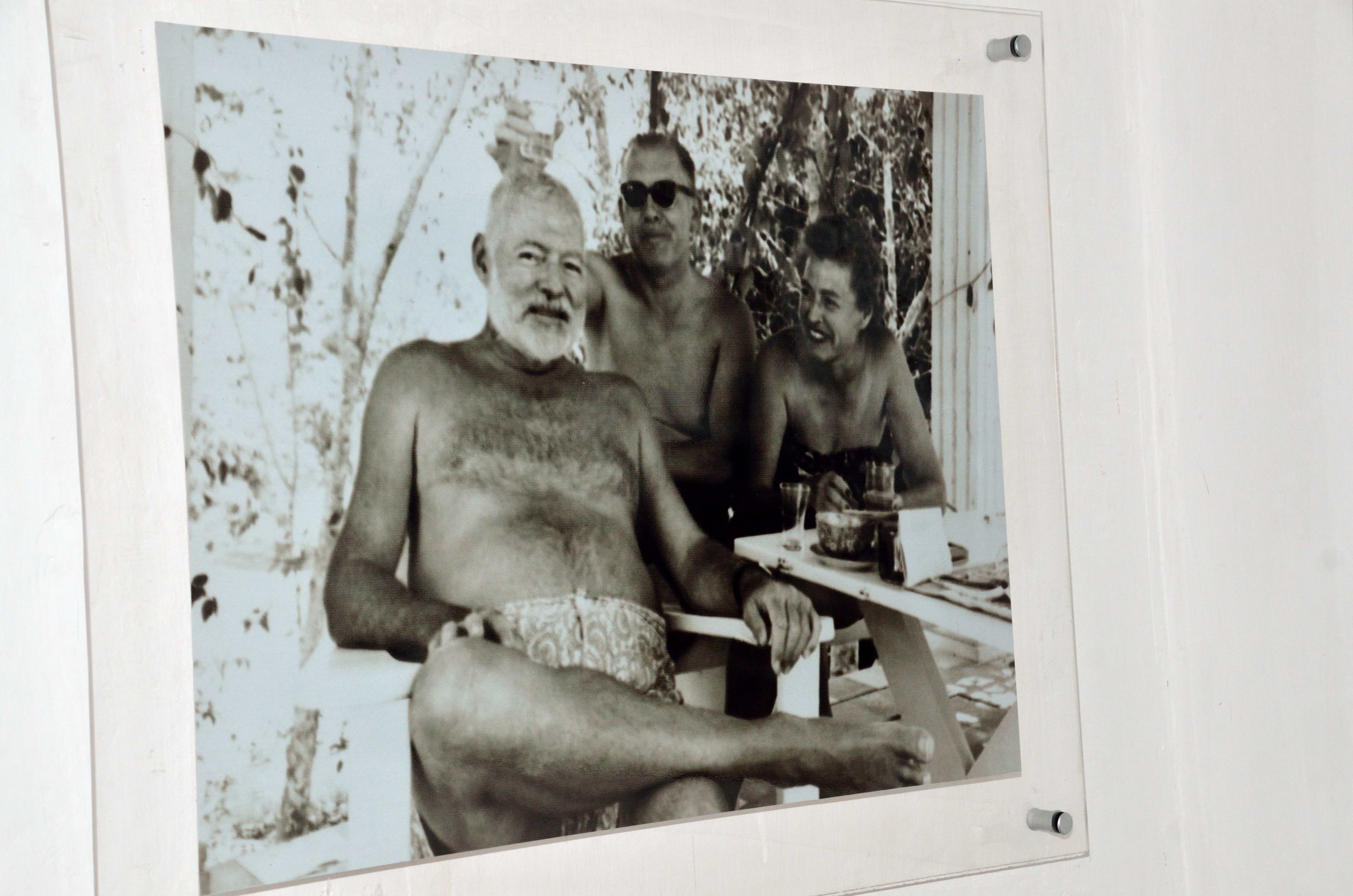 [16]
A few of his favorite photos displayed in the main house. 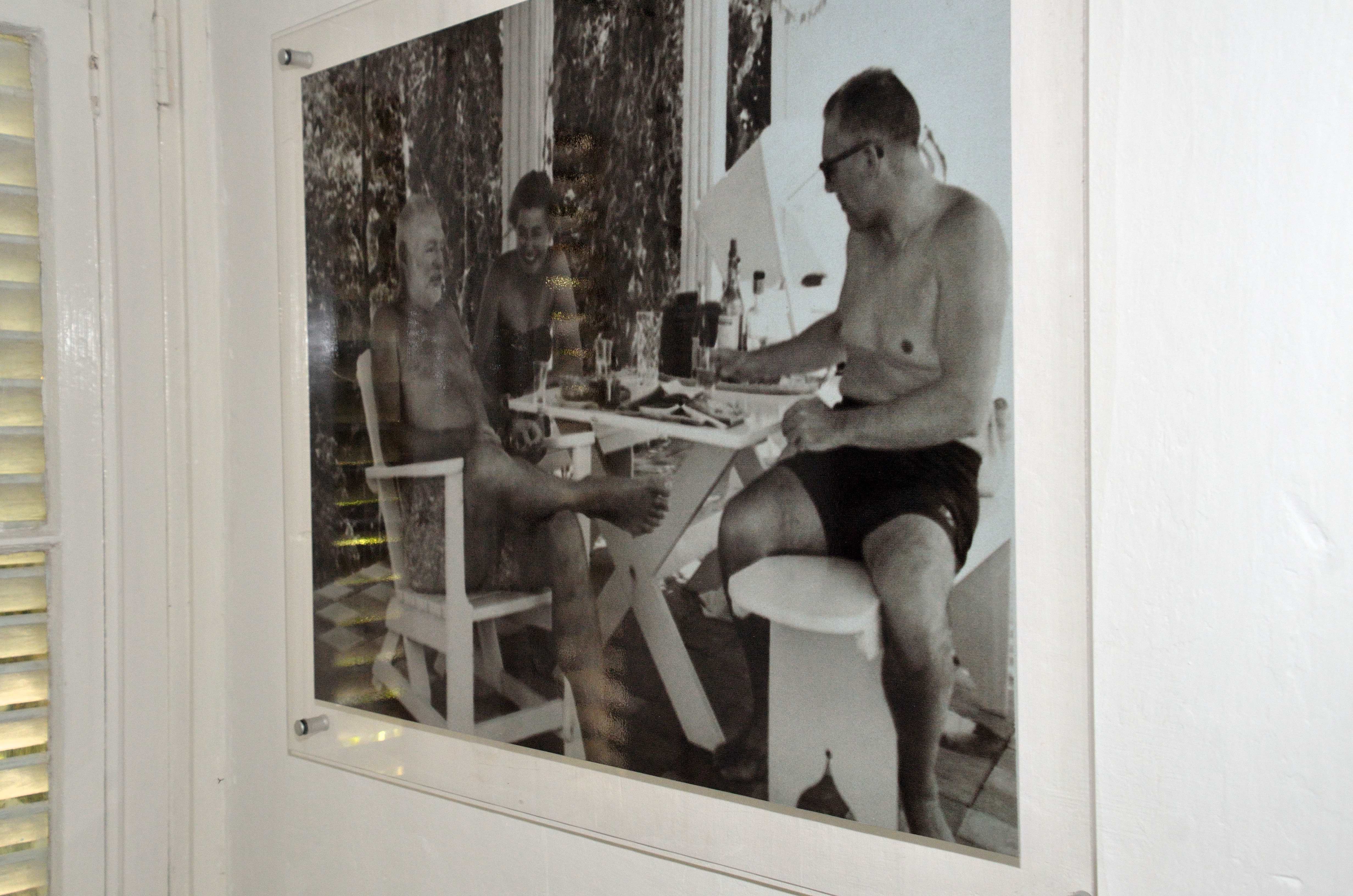 [17]
A few of his favorite photos displayed in the main house. 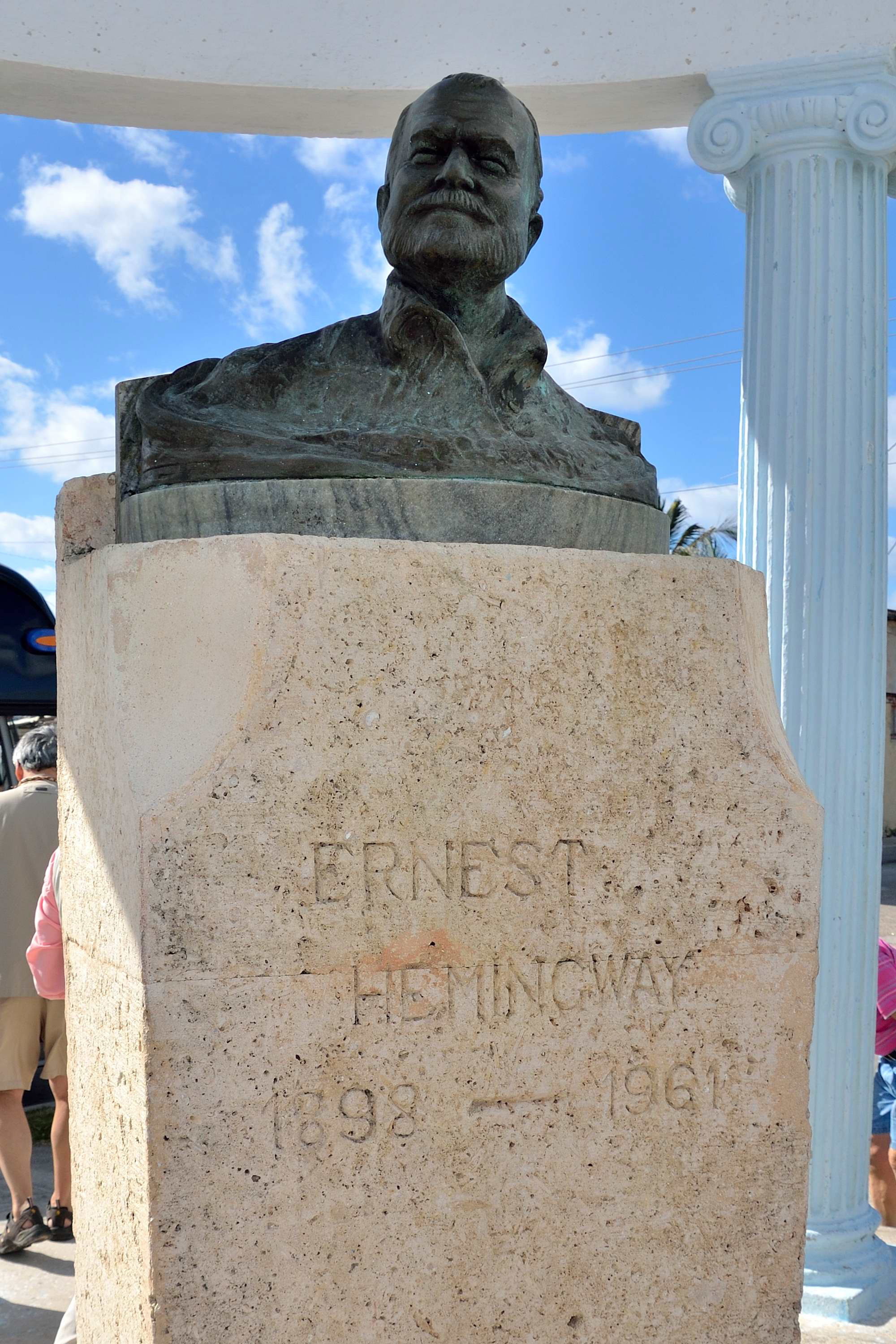 [18]
Hemingway’s bronze statue gazes out to sea from Cojimar harbor.

I decided to visit Cojimar in search of Papa’s ghost. If I were to find it, it would be here. Fidel Castro ruled Cuba for 49 years and outlasted 11 U.S. presidents. Che Guevara is an internationally known hero. Yet in Cuba, Hemingway still looms large, almost six decades after his death. He unequivocally remains as much a symbol of Cuba as the others. He was the “Easy Rider” of his day, a macho man before macho ever came to town. He was More Macho than Macho, in a time when such was revered.

I walked around downtown Havana near Plaza Vieja in search of the right ride. Papa drove a 1955 Chrysler New Yorker convertible in Cuba. I wanted to arrive in Cojimar in one of these. I asked many taxi drivers, but all indicated that finding this model would be unlikely. There were many other classic American car taxis but no Chryslers. I decided to be patient and finally found a driver who indicated that he could possibly find what I was looking for. He said he would “look into it.” I slipped him a small gratuity as well as my room number at Hotel Nacional. Cubans are amazingly resourceful people and my request was sent out on the grapevine. That evening my phone rang and I spoke with a driver who had a Chrysler. I was thrilled! We agreed to meet the next day.

I arrived at Plaza Vieja and met my driver and my soon-to-be taxi to Cojimar. It was a shiny black Chrysler sedan and a New Yorker to boot! Not a convertible, but close enough. I asked the driver what the model year of the car was and he replied “Cincuenta y cinco Senor.” 1955! Amazing — I am working hard to connect with you, Ernesto.

The drive to Cojimar is short. Before I realized it, we were parked in front of Finca Vigía (Lookout Farm). It felt right from the second we arrived. This home is the real deal. The Cuban government owns the property today, but to my surprise and delight, I had adequate access to the home and grounds, and could feel Hemingway’s presence everywhere. I climbed up to the small tower writing studio and gazed at the original Corona typewriter that produced some of the world’s greatest works of fiction. My mind drifted as I envisioned Papa at sunrise, bare chested in shorts and sandals, typing away, his genius flowing with each keystroke. Downstairs are his hunting trophies, library, art and a few of his favorite photos. Inside the bathroom is the scale where he weighed himself, as well as the record of his weight that he penned daily onto the wall next to it. He was very disciplined about his weight.

Behind the main house is the burial plots and grave stones of his four beloved cats. I envisioned Papa stroking one of these creatures as he read his newspaper and sipped on a Havana Club Mojito. Behind the swimming pool sits the Pilar, his prized fishing vessel. He deeply loved this boat and spent many hours aboard her on the blue-green waters of the Gulfstream in search of giant Marlin. A Havana club cocktail was always within easy reach. As I stared at Pilar, Papa appeared to me again. The sea was a beautiful blue-green and I could feel the wind and smell the salt air. His enormous bare-chested hulk was tanned and sweating profusely. I could feel my stomach roll as Pilar pitched in the steep afternoon swells. Papa was on to a giant Marlin; in battle with a thousand-pound fish. His face was the picture of total concentration and he was clearly in his element. There was a bright flash and I saw an enormous fish jump as he reeled furiously to take in some line. I heard a loud splash as the fish landed back in the sea. My senses were totally alive. I was there with him.

Suddenly the vision was gone and I found myself staring at Pilar in her inanimate state. I got the message. It was time to leave and Papa was telling me in his own way. He was a very private man and had revealed to me all he wished to. I had come in search of his spirit and ghost and found both. Papa had been generous to me. Thank you, Ernesto.

Before returning to Havana, I went down to the harbor to view his statue looking out to sea. This bronze casting was made in his memory from scrap propellers donated by local fisherman who profoundly loved and admired him. I gazed at this beautiful bronze bust and looked deeply into Papa’s eyes. I did my best to convey my thanks for his generosity today and his wonderful literary gifts to the world, and to communicate how much both had meant to me. For an instant, I again felt his presence. It was unmistakable and palpable. Tears began to flow uncontrollably down my cheeks. The driver asked if I was OK. I nodded and returned to the car. It was time to go. I finally found what I had been searching for.

>All photos courtesy of Howard Axelrod.