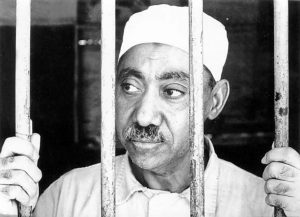 This call, which has emanated from Western pundits for years, has been expressed especially frequently, and urgently, as of late. In March 2015 alone, Newsweek published “We Need A Muslim Reformation [1],” Ayaan Hirsi Ali released Heretic: Why Islam Needs A Reformation Now [2] to much applause and The Atlantic published a widely read feature, “What ISIS Really Wants [3].”

These authors all make a similar argument: “Islamic” militants pose a threat to the world, the militants have arisen due to an authentic and ancient interpretation of Islam that encourages this violence, and, as such, Islam must be reformed to eradicate the theological basis in which these groups allegedly find legitimacy. The reformation proposed is almost always either vague to the point of meaninglessness, or rooted in Western conceptions of progress.

Journalist Mehdi Hasan, writing in The Guardian [4], summed up these arguments: “Apparently anyone who wants to win the war against violent extremism and save the soul of Islam, not to mention transform a stagnant Middle East, should be in favour of this process. After all, Christianity had the Reformation, so goes the argument, which was followed by the Enlightenment; by secularism, liberalism and modern European democracy. So why can’t Islam do the same? And shouldn’t the west be offering to help?”

Two things are inevitably overlooked in these calls: The Western world has significantly contributed to creating the conditions out of which “Islamic” militants have arisen, and these militants operate out of a modern intellectual framework influenced more by Western thought than an established or reputable interpretation of Islam.

In fact, the “architect of worldwide jihad [5],” Sayyid Qutb, was aware of modern Western political thought, to the extent of finding inspiration for his classic manifesto, Milestones, in Lenin’s What Is To Be Done.

Qutb, born in Egypt in 1906, was not notable during the first 40 years of his life. He received a secular education in college and then worked for Egypt’s Ministry of Education while writing mediocre novels on the side [6]. In 1948, however, Qutb traveled to the United States on a scholarship to study the education system. In his two and a half years there, he was appalled by [7] nearly everything he saw: crippling racism, sexual promiscuity, capitalist excess, jazz music and an inability to find a proper barber. 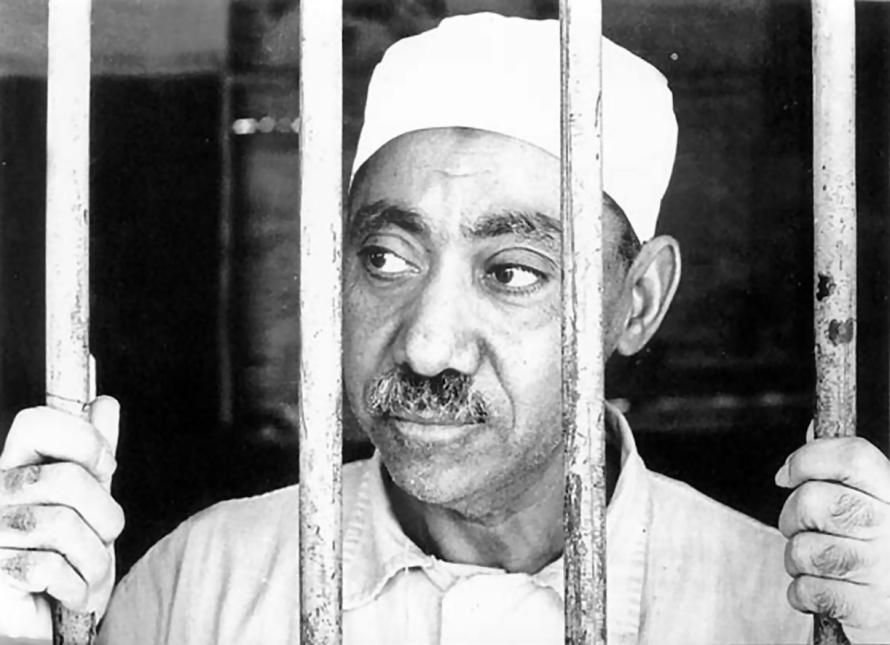 Caption: Sayyid Qutb in prison in Egypt.
Credit: Cover of “Sayyid Qutb and the Origins of Radical Islamism” by John Calvert

Upon returning to Egypt, he joined the prohibited Muslim Brotherhood, seeking to bring about an Islamic revolution. By 1954, Qutb and several other members were tossed into prison on charges of plotting to assassinate President Gamal Abdel Nasser. Qutb spent the next decade languishing in his cell; during his last seven years there, he wrote In The Shade of the Qur’an, a Quranic commentary, and Milestones, a political manifesto [7] and his most influential text.

Milestones [8], Qutb’s blueprint for an Islamist takeover of the globe, bears an unmistakable resemblance to Lenin’s What Is To Be Done, especially the espoused notion of a vanguard party. Qutb says reviving Islam must be the prime objective for Muslims. To achieve this goal, “It is necessary that there should be a vanguard which sets out with this determination and then keeps walking on the path, marching through the vast ocean of Jahiliyyahh [pre-Islamic ignorance] which has encompassed the entire world.” (Milestones 27-28)

Qutb believed that the overwhelming majority of Muslims had been tainted by Western ideas and lacked the level of consciousness necessary to engage in the struggle to establish a caliphate. As such, Qutb said the vanguard would start with just a few well-learned and dedicated Muslims. (Milestones 82)

These Muslims, working in the image of the Prophet Muhammad and his early companions, would have two essential tasks. First, they would need to propagate, spreading the supposedly genuine interpretation of Islam that Qutb outlined throughout In The Shade of The Qur’an. According to Qutb, “These three individuals increase to ten, the ten to a hundred, the hundred to a thousand, and the thousand increases to twelve thousand — and the Islamic society grows and becomes established.” (Milestones 65, 82)

Yet speech was not enough. Qutb noted that “the abolition of man-made laws cannot be achieved only through preaching. Those who have usurped the authority of Allah Almighty and are oppressing Allah’s creatures are not going to give up their power merely through preaching.” (Milestones 68) As such, Qutb called for the use of “physical power and Jihad for abolishing the organizations and authorities of the Jahili system which prevents people from reforming their ideas and beliefs, but forces them to obey their erroneous ways and make them serve human lords instead of the Almighty Lord.” (Milestones 65)

At this point, Qutb believed there would be a genuine Islamic society, at least in one sliver of the globe. This was not enough, however, as Qutb’s vision was strictly international. As such, establishing an Islamic society in one part of the world “is not the ultimate objective of the Islamic movement of Jihad but is a means of establishing the Divine authority within it so that it becomes the headquarters for the movement of Islam, which is then to be carried throughout the earth to the whole of mankind, as the object of this religion is all humanity and its sphere of action is the whole earth.” (Milestones 82-83)

This would be accomplished through what Qutb termed offensive jihad, a notable break from traditional conceptions of jihad, which focus on the internal struggle individual Muslims face to maintain their faith, and in some rare cases, violent resistance against those who have waged war on Muslims. Jihad was never supposed to include unprovoked attacks against non-Muslims, yet Qutb saw these societies’ very existence as threats that needed to be dealt with. As such, he wrote, “It is in the very nature of Islam to take initiative for freeing the human beings throughout the earth from servitude to anyone other than Allah; and so it cannot be restricted within any geographic or racial limits.” (Milestones 84) The Islamic revolution would not be complete until it encompassed the entire globe.

Historians Ladan and Roya Boroumand note [9], “[Qutb’s] ideal society was a classless one where the ‘selfish individual’ of liberal democracies would be banished and the ‘exploitation of man by man’ would be abolished. God alone would govern it through the implementation of Islamic law (shari’a). This was Leninism in Islamist dress.”

Qutb, of course, was by no means a Marxist. He describes a world stuck between two great evils: capitalism, which he said had turned the West into a “rubbish heap,” and communism, which he saw as being ruled by “evil and dirty materialism.” (Milestones 155) Qutb notes that Marxism once had some influence, “But now Marxism is defeated on the plane of thought, and if it is stated that not a single nation in the world is truly Marxist, it will not be an exaggeration. On the whole this theory conflicts with man’s nature and its needs. This ideology prospers only in a degenerate society or in a society which has become cowed as a result of some form of prolonged dictatorship.” (Milestones 23)

Regardless, Ladan and Roya note [9] that, “Qutb’s brand of Islamism was informed by his knowledge of both the Marxist and fascist critiques of modern capitalism and representative democracy.” Ibrahim el-Houaiby, a political scientist and former Muslim Brotherhood member, writes [10], “In ‘Milestones’ Qutb presents a manifesto for change, one heavily influenced by Lenin’s ‘What is to be done,’ with the clear Islamization of its basic notions.”

Qutb didn’t get a chance to see how his blueprint to achieve an ideal Islamic society would play out. He was released from prison in 1964, but arrested only eight months later, this time being accused of leading a “Marxist coup” to overthrow the state and assassinate the president. Prosecutors quoted Milestones in his trial and Qutb ultimately was executed in August 1966 [11]. (Milestones 185)

Qutb’s idea of a revolutionary Islamist vanguard did not die with him, however, as the intellectual framework he established has since been carried on. Author James Meek, writing in the London Review of Books [12], notes that Ayman al-Zawahiri’s “uncle was Qutb’s pupil and protégé, and, at the trial which led to his execution, his lawyer. Qutb’s death had a profound effect on the teenage Zawahiri.” Shortly after Qutb died, al-Zawahiri took part in forming a violent underground cell [7] that would later become the Egyptian Islamic Jihad, a predecessor to al-Qaida. This cell worked toward the goals Qutb called for in Milestones, including overthrowing the Egyptian government and creating a worldwide Islamist state.

Journalist David Von Drehle, writing in Smithsonian Magazine [7], notes that while this was occurring, “Qutb’s brother Muhammad went into exile in Saudi Arabia, where he taught at King Abdul Aziz University. One of his students, an heir to the country’s largest construction fortune, was Osama bin Laden.”

Bin Laden and al-Zawahiri did not just respect Qutb; they used his work as the intellectual backbone for al-Qaida. In The Looming Tower: Al-Qaeda’s Road to 9/11, author Lawrence Wright states that without Qutb, “al-Qaeda would not have existed. Al-Qaeda depended on a unique conjunction of personalities … each of whom manifested the thoughts of Qutb, their intellectual father.” (The Looming Tower 332)

Qutb’s influence extended beyond al-Qaida, as novelist Pankaj Mishra writes, “Not surprisingly, Qutb, whose life and ideas dramatized the widespread recoil from secular Western ideologies to Islamism, went on to become the inspiration for several generations of radical Islamists in Egypt, Saudi Arabia, Syria, Iraq and Turkey.” (From The Ruins of Empire 265) Writing in the Wall Street Journal, author Aly Salem states [13] that, “It is not an exaggeration to say that Qutb is to Islamism what Karl Marx is to communism.”

Lenin’s influence on Qutb, and Qutb’s influence on nearly every Islamist militant group that followed him, are clear indicators that Islamist militants arose from a serious engagement with, not a retreat from, modernity. Radical Islamist political movements have always been around, to an extent, but never to the degree following the widespread Western intervention in the Muslim world. Moreover, the groups that arose from what Mishra calls the ruins of empire were highly influenced by modern Western thought, as Qutb’s case makes clear.

This is not to say that the West is solely responsible for “Islamist” militants, nor that Lenin is in any way complicit in the violence Qutb inspired. Instead, these connections suggest that the elements in the Muslim world decried by Western pundits are not the result of something intrinsically violent about Islam, but rather that Islamist militant groups have been crafted out of modernity.

Of course, many would respond to Qutb-inspired reformation by claiming it is the wrong sort of reformation, and it isn’t inevitable that future reformation would end up this way. This claim may be true, but it points out the danger in ungrounded calls for reformation: the outcome can be dangerous, and it often isn’t what the Western world (or much of the Muslim world, at that) wants. Moreover, the claim ignores the fact that it is ultimately up to Muslims to shape Islam’s future, not Western observers attempting to impose their political will on a region they have already undermined for centuries.