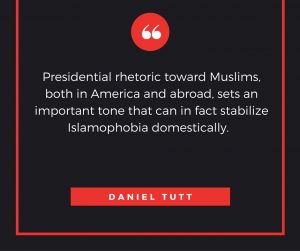 Of all the potential catastrophes awaiting us in the coming Trump era—from the rescinding of the Paris Accords on global climate change, to the overturning of the affordable care act, to a re-vamping of the Supreme Court—the intensification of Islamophobia stands out as particularly salient given that Trump’s campaign has already caused it to start happening [1]. Reported incidents of bullying, discrimination, and hate crimes directed toward Muslims, and those perceived to be, are rising. But where does presidential rhetoric on Muslims match up with a re-empowered white base of Trump supporters?

Given the countless unknowns facing a Trump presidency, it is essential that Muslim, Black, Arab, Sikh, South Asian and the wider ally base of these communities begin preparing strategies for dealing with the Trump era. Thankfully, we have a lot of polling and social science data on Islamophobia in America, so we know a great deal about its ebbs and flows in the post-9/11 period: polling on views toward Muslims show that Americans have grown more willing to accept Muslims’ civil rights and respect them as neighbors. As author Dalia Mogahed’s analysis shows [2], the war on terror and political posturing during election seasons and run-ups to wars drum up Islamophobia to a greater extent than domestic acts of terrorism. The most telling proof of Americans wider acceptance of Muslims as citizens and compatriots came last summer during the Democratic National Convention when Khizr Khan and his wife, the parents of a fallen soldier, waved the U.S. constitution and denounced Trump’s proposed ban on immigrants from Muslim-majority countries. Trump lost some momentum at that moment and had to scale back his plan to ban Muslim immigrants from America.

But for all of Bush’s imperialism and reckless policies in the Muslim world, we should remember that Bush’s rhetoric on Islam and Muslims apropos the War on Terror was very tempered and balanced. Bush’s rhetorical balance served a strategic purpose: intelligence gathering among American Muslim communities as his administration unrolled an unprecedented surveillance operation of American Muslims. Immediately following 9/11, Bush spoke at Washington’s Islamic Center and said “Islam is a peaceful religion” and that American Muslims are our allies. What accounted for Bush’s cooperative position vis-à-vis American Muslims was tied to the fact that Muslims were early supporters of his campaign and key American Muslim leaders formed a cooperative relationship with his inner circle of advisors. How will Muslim leaders approach the question of collaboration with a Trump presidency, given all indications show that he will run a smear campaign against mainstream American Muslim organizations and may erroneously try to associate mainstream Muslim organizations with the Muslim Brotherhood [3]?