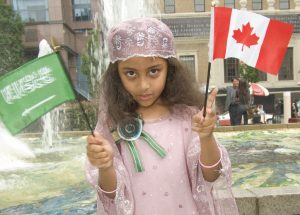 On April 27, 2016, the Environics Institute released a survey [1] that reassured liberals and Islamophobes alike that they have the correct view of Muslims in Canada. The survey of over 600 Canadian Muslims, conducted between November 2015 and January 2016, attempted to discover what it means to be Muslim in Canada today, and asked questions regarding level of religious practice, patriotism, experiences with Islamophobia and thoughts on the federal government’s anti-terrorism efforts. 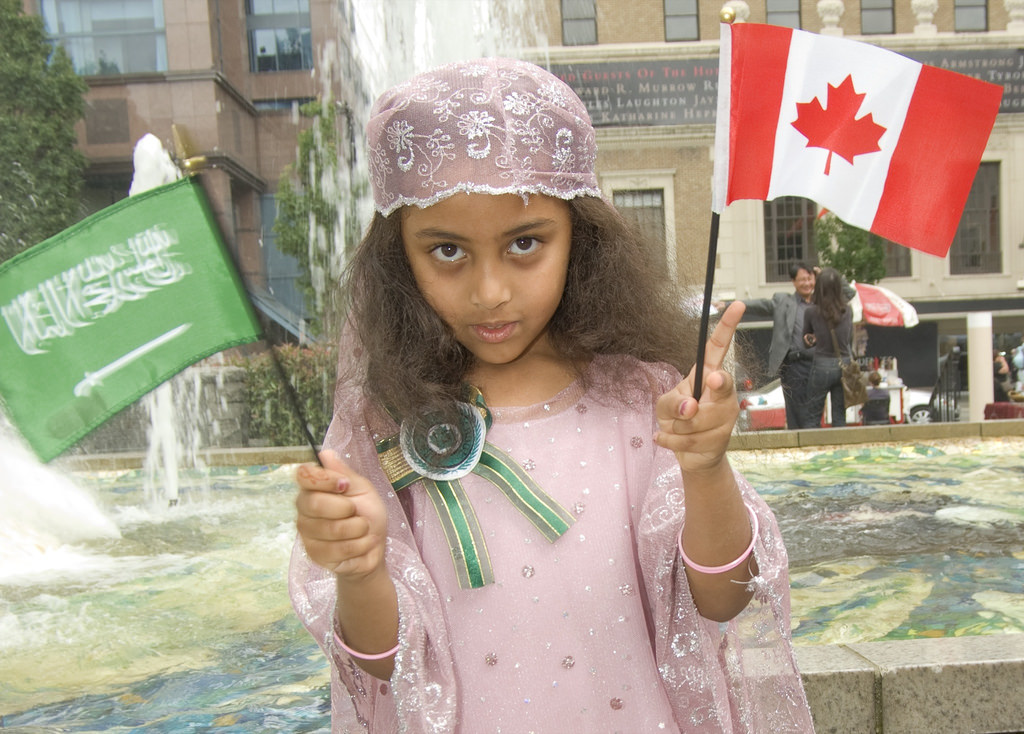 A girl at the Canadian Islamic Cultural Expo in 2007. >Flickr/Shazron [3]

These Muslims are right to be worried about Canadian media, as made clear by the way the results of this survey were covered. More liberal media outlets — such as the CBC, the Toronto Star and The Globe and Mail — published articles with headlines focusing on the fact that Muslims express higher levels of patriotism than non-Muslims, such as: “Muslim Canadians increasingly proud of and attached to Canada, survey suggests [4],” “Majority of Muslim Canadians proud to be Canadian, survey finds [5],” and “Muslim Canadians proud of their country’s freedom, diversity: Survey [6].”

Both portrayals have troubling implications. Liberal outlets used the survey results to reassure Canadians that Muslims are patriotic, and thereby reinforcing the stereotype that Muslims are a fifth column by playing into it instead of tackling the problematic assumption at its root. Conservative outlets, meanwhile, portrayed an increase in practicing Muslims as a threat to the country, thereby associating Islam with terror or treason. The idea that expressing belonging to one’s faith, and increasing devotion to it, is a threat to the state is something that uniquely refers to Muslims in Canada at this point in history.

Yet these media outlets are not solely to blame for the assumptions passed along in their articles, as a large chunk of Muslims in Canada uncritically celebrated the survey’s results. For example, the executive director of the National Council of Canadian Muslims, Ihsaan Gardee, said in the group’s press release, [9] “There is a lot of good news in the survey. A majority of Canadian Muslims have a strong sense of belonging to Canada, as well as report a positive sense of how they are perceived by their fellow citizens.  That bodes well for all of us who are working to promote civic engagement and to promote greater understanding of diverse communities.” This message was reinforced all over social media by Muslims who shared the results in an effort to prove Islamophobes wrong by showing off the levels of patriotism.

This is just one example in a long trend of Muslims in Canada trying to defeat discrimination by seeking to prove to non-Muslims that they are just like them. In 2014, a bill was proposed [10] in Quebec to ban public employees from wearing visible religious symbols, including the hijab. The proposal was eventually defeated, but it sparked a toxic conversation that further normalized Islamophobia in the province. Moreover, it caused a spike in hate crimes. Despite this all, many Muslims sought to fight back by reinforcing similarities with other Quebeckers, such as eating poutine and cheering for the Montreal Canadiens. 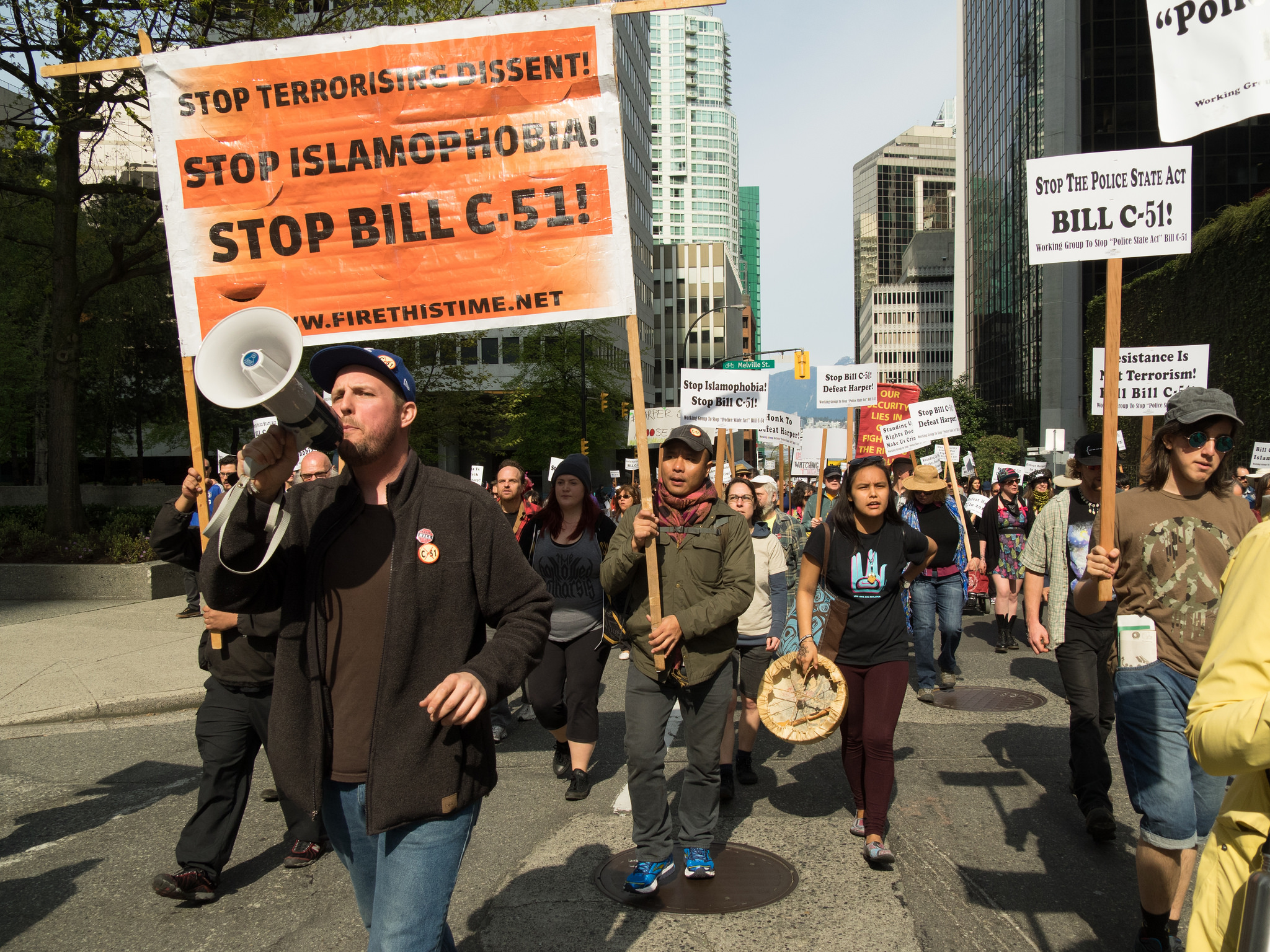 This tendency among Muslims is misguided for three reasons. First, the idea that Muslims need to show patriotism or adherence to popular culture to be trusted is a unique burden not imposed on many other groups in Canada. White Catholics and Protestants in Canada, for example, are not asked to express their allegiance to the state because of concerns that they may actually be working for some outside power. Nor are they asked to condemn the actions of their fellows in faith across the world, as if they are somehow complicit in or responsible for their actions. These tests of allegiance are only given to Muslims because of Islamophobia, and if Muslims play along, they only further the legitimacy of these tests as opposed to undermining them.

Second, these appeals to populist sentiment will inevitably leave out a large chunk of Muslims. Some Muslims may genuinely enjoy eating poutine, watching hockey, ordering subpar coffee at Tim Hortons or one of the many other things that supposedly define being Canadian. Yet others won’t, and this doesn’t make them any less deserving of the respect and tolerance Canadians are supposed to be afforded.

This matter is more serious with regard to religious practice and political critiques. Muslims shouldn’t play along with the idea that acceptance relies on falling within a level of religious practice deemed to be acceptable by mass society. Some Muslims will be more practicing than others, and they shouldn’t be subjected to unjust scrutiny because of it. With regard to political critique, many Muslims aren’t proud to be Canadian due to the state’s actions, especially after Stephen Harper’s long reign as prime minister and all the Islamophobic policies [13] that came with it such as a ban on niqabs, increased state surveillance powers that disproportionally affect Muslims (which 48% of respondents in the survey opposed) and the Barbaric Cultural Practices Act [14], which wrongly portrays domestic violence as something unique to Muslim communities. Muslims should not accept an idea of tolerance that relies on leaving these critical Muslims out of the picture, not only because doing so is unjust, but also because it is a slippery slope and leaves the arena of “acceptable” discourse open to being compressed by society over time.

Finally, pandering to mass society is a futile effort because Islamophobes within that society will never be satisfied. The Environics survey reported a high level of patriotism among Muslims, yet the right-wing media portrayed this as some sort of deception or evil plot. Muslim leaders routinely condemn whatever act of violence is in the media at the time, and yet society claims these condemnations never happen. Muslims will try to act as “Canadian” as possible, and yet Islamophobes will still find something to latch on to, claiming that Muslims need to better integrate into Canadian society. The requirements offered by Islamophobes will continuously broaden if they are accepted, until finally there is little meaning to being Muslim in Canada at all.

Rather than appealing to populist sentiment, Muslims should combat Islamophobia by attacking it at its core and holding Canadian society accountable to its own norms and laws. Last year, a clear example of how effective this path can be arose with a niqab-wearing woman, Zunera Ishaq [15], who came to Canada in 2008 from Pakistan. After being in the country for several years, Ishaq was able to get her citizenship. She decided that she wanted to wear her niqab during the citizenship ceremony, as she felt she didn’t want to give up any part of herself to become Canadian.

This quickly became an issue because in 2011, the Conservative government introduced a law banning women from wearing niqabs during the citizenship ceremony. Ishaq saw this ban as a violation of the liberties offered to Canadians by the Charter of Rights and Freedoms and decided to launch a legal challenge against the ban. The challenge took a couple years but was successful in a federal court after an appeal by the Conservative government. Then her challenge was upheld by the Federal Court of Appeal. The government then appealed to the Supreme Court of Canada in October 2015, but the Liberal Party of Canada won the federal election that month and dropped the appeal [16], claiming that it violated the Citizenship Act and wasn’t an issue that needed to be politicized.

Yet politicized it was, as Ishaq’s case became the most discussed issue of the 2015 election. Many Canadians, including prominent figures in the media, said Ishaq was selfish, should’ve stayed in Pakistan if she wanted to wear a niqab and that she didn’t know what it meant to be Canadian. For example, a columnist at the National Post, Barbara Kay [17], said of the niqab that, “It is corrosive to the social reciprocity on which neighbourhoods depend for spontaneous camaraderie. And culturally speaking, Canadians’ opposition to the niqab is commendable, since it means most of us feel we still have an actual culture to be harmed.”

Many Muslims have said the niqab isn’t part of Islam and that Ishaq should just accept the freedoms Muslims are already given. Raheel Raza, the president of The Council for Muslims Facing Tomorrow, wrote in the Huffington Post [18], “As a Muslim mother who never saw a niqab when I was growing up in Karachi, Pakistan, I am astonished to see Canada’s judiciary caving in to Islamists who have nothing but contempt for Canada’s values of gender equality.”

Ishaq certainly could have given in to populist sentiment and taken her niqab off for the few minutes needed during the citizenship ceremony. This would have made her life much easier and allowed her to get citizenship a couple years earlier than she eventually did in October 2015. Instead, Ishaq persevered, and this was a critically important moment for all Muslims in Canada.

Ishaq realized that those claiming she needed to integrate into Canada had no legal basis behind their calls. She rightly interpreted that the Canadian Charter was in her favor and that the values Canada purported to cherish actually supported her fight. In essence, Ishaq cut through all the populist noise and called on the Canadian state to live up to the image it projected. This was successful, and now Muslims enjoy broader freedoms than they did before the moment she decided to put principles over convenience.

Ishaq should be viewed as a hero to all Canadians, and especially as a role model for Muslims. The fight against Islamophobia should not center on trying to make the bigoted comfortable. Instead, it should directly challenge injustice, and not just for Muslims who look or practice as you do. Ishaq’s unflinching and determined struggle for justice is closer to the essence of what Canada purports to be than any attempt to pander to the whims of broader society.

This article appears in the Summer/Fall 2016 print issue of The Islamic Monthly. [19]

The magazine can now be purchased with print on demand!Click on this link [20] to purchase a single issue.