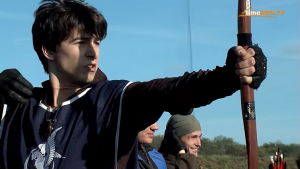 The stones take on different appearances depending on the era: Some look like barley sugars twisted together, topped by crowns and turbans; others have a short poem in Ottoman script. There were 300 some target stones put up until the end of the 19th century, but just 30 still exist today. They are monuments erected by the sultans to commemorate bold archery feats in this former playground of Ottoman royalty.

Surrounded by gecekondus — sub-standard slum dwellings in Istanbul — in drab, maze-like backstreets, popping  up in odd juxtaposition to surrounding buildings, standing askew in attitudes of neglect and strange angles, wedged against walls, alone in cemeteries, sticking up obliquely from pavements in Okmeydanı, an Alawite part of Istanbul overlooking the Golden Horn, they attest to a different age overlooked by modern Istanbul, commemorating a seemingly forgotten time when this was an Ottoman archery range. 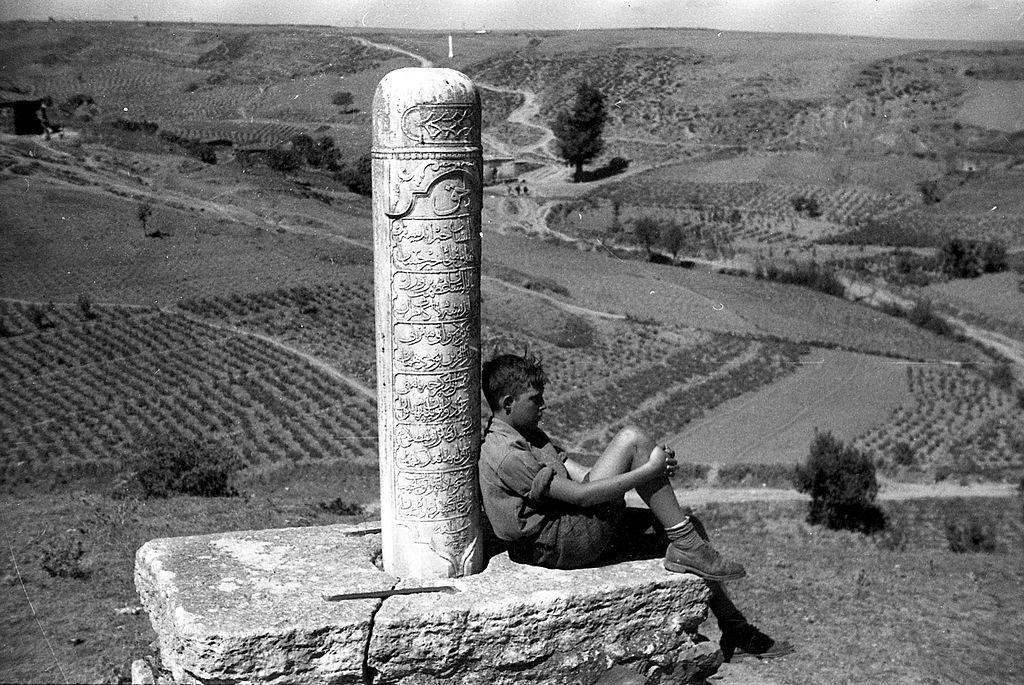 A range stone is a monumental marker authenticating the success of the archer’s range. If the archer were a sultan, the mark is called “target stone.” In his book Last Stones of İstanbul (2006), M. Şinasi Acar writes: “Exceeding a target stone is called to have the range or to break the range. … The location of the arrow was marked by digging the ground and filling it with pebbles. In six months the stone would be fixed to place. It is a tradition to celebrate this moment and the archer to give out presents.” Okmeydanı has the biggest number of range stones. Of about 300 stones erected until the end of the 19th century only about 30 are extant. >Flickr/SALTOnline [1]

In 2013, aiming to revive the old spirit of the place, buildings were torn down and an ultra-modern archery range was built, inaugurated by then Prime Minister Recep Tayyip Erdogan. The project signaled a revival of the ancient art of archery, as practiced by the Ottomans, and could be seen in the context of a surge in interest regarding all things Ottoman.

The range was not without opponents; the mostly Alawite residents saw the initiative as an intentional slap in the face to their own minority sensibilities and identity. In 2014, at the height of Istanbul’s Gezi park protests, riots erupted here too against Erdogan’s regime and its perceived neo-Ottoman agenda.

Okmeydanı is a blighted neighborhood in the heart of Istanbul facing demolition by city authorities. Meaning “the place of the arrow,” in Turkish, literally “arrow field,” it was named after the archery area and lodge built by Sultan Mehmed II the Conqueror.

In the last half decade, Ottoman archery clubs have sprung up in Istanbul, across Turkey and in diaspora communities in Germany and other European countries, aiming to revive the old martial art while striving to maintain its religious context.

Resul Hoca is a Sufi teacher of Turkish descent and leader of an Ottoman archery club in Berlin. Even before the Ottomans entered the world stage, Hoca says, archery played a prominent role in Islam in general.

“When Adam was created, Allah taught him how to tend the land, sowing and harvesting,” says Hoca. “And when he sowed seeds for the first time, and when the harvest was complete, he saw that many birds and crows came and ate up the crops.  And then he said, ‘Allah, teach me how to drive away these birds.’ So Allah sent the archangel Gabriel with a staff in his hand. This staff was from Paradise and it became the first archery bow. Gabriel was the first teacher of Adam who taught him archery.”

Hoca says there are more than a thousand hadiths (narrations of the Prophet Muhammad) having to do with archery, and the most revered teacher of archery was Sa’d ibn Abi Waqqas, who shot around 1,000 arrows in the battle of Uhud. There were sahabes (followers of the Prophet) who were such avid archers that at an advanced age, they could hardly walk but still could take up their bow and arrow.

Archery was a holy sport in Islam, says Hoca, pointing to a verse in the Quran that says, “You did not shoot (anything) when you shot (arrows or spears), but God threw (them).” (8:17) Thus Allah causes the arrow to reach its mark, and as an archer, the Ottoman soldier was not allowed to think that he shot the arrow.  The Ottoman archer shouted “Ya Hak!” (the true!) as he released his missile.

To this day, among the sacred relics of Islam in Istanbul’s Topkapı palace — among the strands of the Prophet Muhammad’s beard and the staff of Moses — is the “Bow of the Prophet,” made of bamboo and dating around 615 CE. Its simplicity is offset by a decorative scabbard commissioned by an Ottoman sultan.

In the hands of the Ottoman Turks, the bow became one of the most fearsome weapons until the advent of gunpowder. Despite its slight and unimposing appearance, it was capable of firing arrows at distances of over 600 meters, something to bear in mind considering that in an Olympics shooting range, the distance is 70-90 meters.

The bow itself was a symbol of religious cosmology steeped in mysticism. The upper limb of the bow symbolized the “good” or “holy” while the lower limb stood for “evil.” The grip was seen as binding these two polar opposites. In the center of the grip was a small piece of ivory or bone plate (chelik), a symbol of the vahdet-i vücûd, a Sufi term encompassing the entire universe and its creatures, a projection of God.

Hoca says the Turks were the first people in the world to practice archery as a recreational activity, not just for martial purposes. They established okmeydans, fields of the arrow, in Edirne, Bursa and Istanbul. 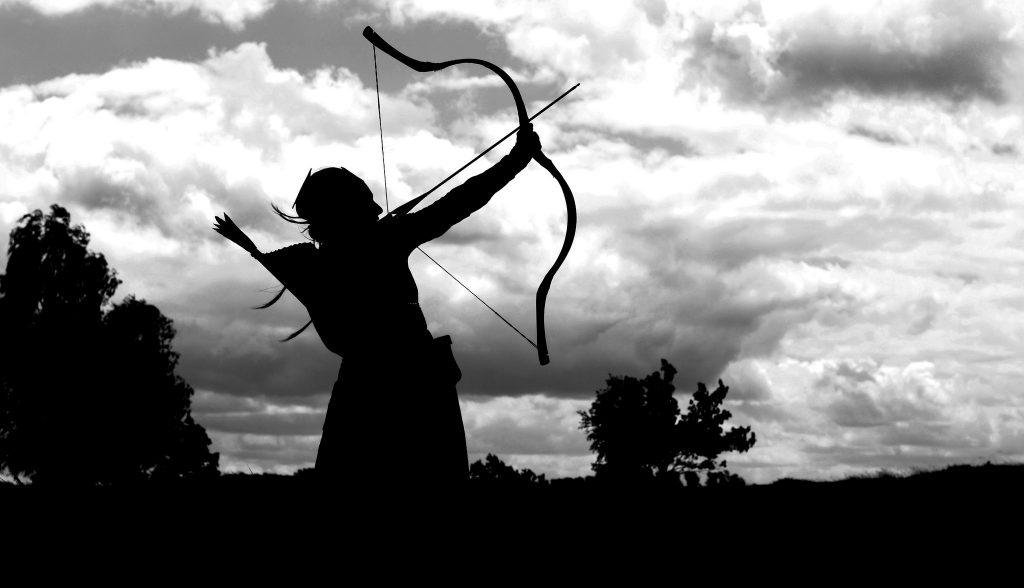 An archery tournament in Germany. >Flickr/BenGun [2]

The Prophet had said, “Teach your children swimming, archery and horse riding.” In accordance with this hadith, Turkish children started off swimming, riding and practicing archery from an early age. The Turks were especially adept at practicing archery on horseback, and were said to be the only people who could shoot backward on horses while beating a retreat.

Each archer had 300 arrows on him, which were shot off at mind-boggling speeds. Within a matter of minutes, Ottoman archers were said to shoot off 40 or 50 arrows. The first guns came in the 15th century, were cumbersome to load and were no match for the agile Ottoman archer, who could achieve greater precision and distance than those achieved by guns

Gradually, guns began to exceed the bow and arrow in efficiency, but because archery was sunnah (a recommended practice of the Prophet), it was still practiced by Ottoman Turks in dergas, or tekkes (Sufi lodges). Ataturk and his broad-reaching reforms aimed at creating a westward-looking nation forbade recreational archery and the manufacture of bows and arrows. Traces of Ottoman glory were defaced by building housing on the old Okmeydanı target range.

In 2005, there was a major historical, political and architectural effort to return the old Okmeydanı range to its former splendor. The work was completed in 2012 and officially reopened by Erdogan in 2013. His son, Bilal, is president of the Turkish Archery Association.

At the grand opening of the Okmeydanı range, Bilal Erdogan shot two traditional arrows, missing the center of the target but getting two points for his shots. He said “Ya Hak” while firing his arrow.

The Okmeydanı Okçular Lodge is made up of five sections over 5,000 square meters. There is a small mosque, a conference hall, library, museum and the Sultan’s summer palace. The library has books on archery and its history and the museum displays bows and arrows from the Topkapı Palace Museum. There are both outdoor and indoor ranges.

Despite the effort to resurrect the history of archery in Turkey, in the years between Ataturk and Erdogan, a lot of the artistry and craftsmanship relating to Ottoman archery was lost. The last bow maker died without leaving an heir, and there is a scarcity of written documents about how to fashion bows. Turkish craftsmen are now trying to replicate the bows in museums, using X-rays to determine how they were made while consulting some rare 16th-century documents.

For instance, researchers have found that the wood used in bows had to be hewn from a special tree growing on a mountain 1,000 meters high. The wood was only supposed to be taken from the side of the tree that faced the sun. Then buffalo horn (flexible and strong) is taken and stuck with ox tendon (flexible and bends like rubber). Then the entire piece is covered with a particular fish mucus.

“They didn’t use any chemicals,” Hoca says. “Everything was natural.  And they developed this art over years. And you have to imagine, this gets lost after a while.  And that’s a shame. And now this government is investing so much money so that these techniques come to the fore again.”

Adnan Mehel, head of an Ottoman-style archery club in Istanbul and a Sufi, says the revival of traditional archery goes back 15 years, when a handful of people gathered to practice it in its original religious context.

“In the time being, there are around 2,000 practitioners of the sport in Turkey,” says Mehel. “It seems as though there will soon be 10,000 practitioners because the sport is growing day by day.  If you look at it today, everywhere in Turkey — and not just Turkey — sport schools are being opened and it’s getting bigger and bigger.  Nevertheless, we have to say that this sport is supported very much by the media and the state, and it is thanks to this that this sport has grown.”

Mehel first became interested in archery in 2000 in Antaliya, where he was working as an animator. Now Mehel has a team with three locations: two in Üsküdar and in Küçükçekmece. He has also taught many who have gone on to teach others.

Mehel says that when he first started out, he had to contend with scorn from people who dismissed the pastime as outdated and having little contemporary relevance.

“The biggest obstacle was people themselves who made fun of me and said it was all old-fashioned stuff and belongs to the past, and why was I doing this?” Mehel says. “And this was difficult psychologically.  But after 2010, I had a report on Turkish TV on Haber Türk, which lasted eight hours. And I appeared with two history professors, and I spoke with them for eight hours about archery and the tradition. And since this time, there was an increase in interest.  And people stopped making fun of it.”

Since then, Mehel has seen the sport grow. Participants dress in Ottoman garb while practicing shooting, clothing that the hobbyists cut themselves with an eye on old fashions. Before shooting, they perform abtest (a cleaning ritual) and recite the the first chapter in the Quran.

“I would like to invite everyone to practice this sport,” says Mehel. “I am reminded of a hadith from our Prophet, where he says if you are suffering from stress, you can get rid of it by practicing archery.  I am myself a lawyer and I am able to get rid of my stress in this way, by following the hadiths of our Prophet.  And I invite everyone to practice this sport and to enter into its mysteries.”