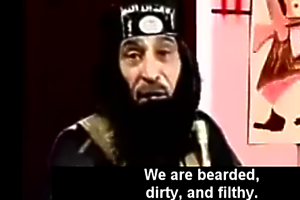 It is a persistent perception – which, unfortuntely, has become reality – that the larger Muslim community around the globe has not sufficiently condemned or distanced itself from the terror and violence committed in its name. This is despite the fact that no other community has faced such a demand to condemn its criminals. This is also despite the fact that such a perception is simply not true [1]. The same goes with groups such as ISIS [2] (or, as I like to call them, “KIL: The Kharijites of Iraq and the Levant [3]“).

Yet, apart from the numerous condemnations and declarations of Islamic scholars [4] of the un-Islamic nature of ISIS, there is another – perhaps less well-known in the West – proof of the widespread rejection of the ideology of ISIS and other groups similar to it: the numerous parodies of ISIS on satellite television in the Middle East.

The first, and perhaps the funniest one I have seen, is a parody of ISIS on Palestinian TV [5] from June 2014. It depicted an ISIS “ambush” stopping three people and questioning them. The first person they stopped was from Lebanon, and they asked him how many rak’aas are in the Fajr prayer. He answered “four”: two sunnah and two fard. Because he “forgot the two rak’aas for greeting the Masjid,” they take him off camera and a gun shot is heard, implying he was killed.The next person was asked, “How many letter ‘Alif’ is in Sahih Al Bukhari?” After pausing for a bit, he told them, “Just shoot me.” Again, he is taken off camera and a gun shot is heard.The next person they stopped was “Khoka” or “Peach,” a Christian from Jordan. The ISIS fighters kept arguing with each other over who will get to kill him until Khoka died of a heart attack. The fighters were crying, begging him to “wake up so we can kill you.”

The Kurdish parody of ISIS [6] is a music video of ISIS fighters, with the black flag of ISIS in the background, in a band singing and playing instruments about themselves. Lyrics to this song include: 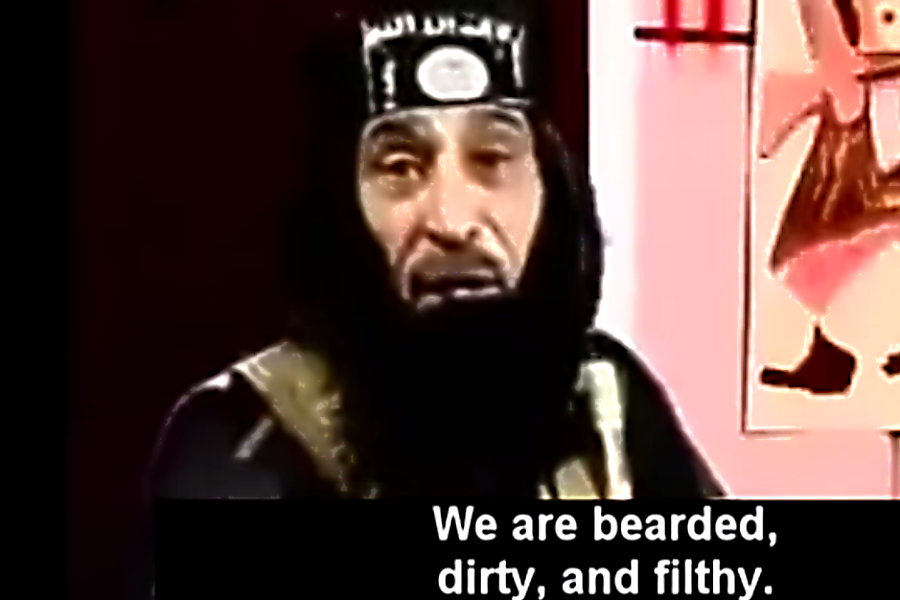 Speaking of Jihad and sex, the most biting satire comes from a trailer for a television program  [8]called, “The Mythical State.” It is in the form of a music video, saying that ISIS is actually the son of Iblis (Satan). The lyrics to this song include: “Pray for him. He will slaughter human beings a little. Pray for him. He will toy with religion a little.” The most stinging criticism, couched in a cool Arabic beat, comes at the end of the video:

The only fear I have is, in their effort to mock and demean ISIS, it may make all of Islam a laughing stock. Because the fighters of ISIS take up the outward appearance of piety: beards, prayer, etc., it risks driving more people away from all religion. Indeed, as Thomas Friedman noted [9], this may already be happening.This is further reason why – apart from the fact that they couch sheer barbarism in the cloaks of religion – that these groups must be marginalized and resisted at every turn. Not only do they commit evil, they defile Islam in the process. Islam is far too precious to let these barbarians – “extremist” is too kind a word – get away with it.