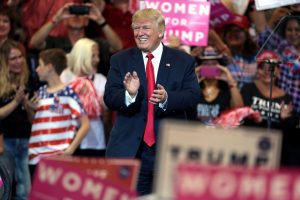 Press Secretary Sean Spicer and the Trump White House claim [2] that the U.S. military raid in Yemen was a success.

Either Spicer doesn’t know the literal meaning of “success” or he doesn’t get what “all standards” means. From the beginning, the raid went haywire. [3] When U.S. Navy SEALs, along with an elite force from the UAE, arrived in the Yaklaa village, they were immediately met with a counterattack from al-Qaida in the Arabian Peninsula (AQAP) militants. In the ensuing firefight, air support was called in to attack AQAP coordinates and to pull out the pinned down SEAL team. During the rescue operation, an MV-22 Osprey lost power and crashed, destroying the aircraft and wounding two servicemen. In the aftermath, Navy SEAL Chief Petty Officer William “Ryan” Owens [4] was dead and three others were wounded. Yemeni officials claimed that at least 16 civilians — eight women and eight children — were killed [5], which the U.S. government quietly said was “likely [6].” One of the children killed in the botched raid was an 8-year-old American girl [7], Nawar “Nora” al-Awlaki. (Nora’s 16-year-old brother, Abdulrahman, also an American citizen, was killed by a CIA drone strike in 2011, two weeks after their father, Anwar al-Awlaki, a leader of AQAP and an American citizen, was killed extra-judicially in a drone strike, along with another American citizen [8], Samir Khan.) 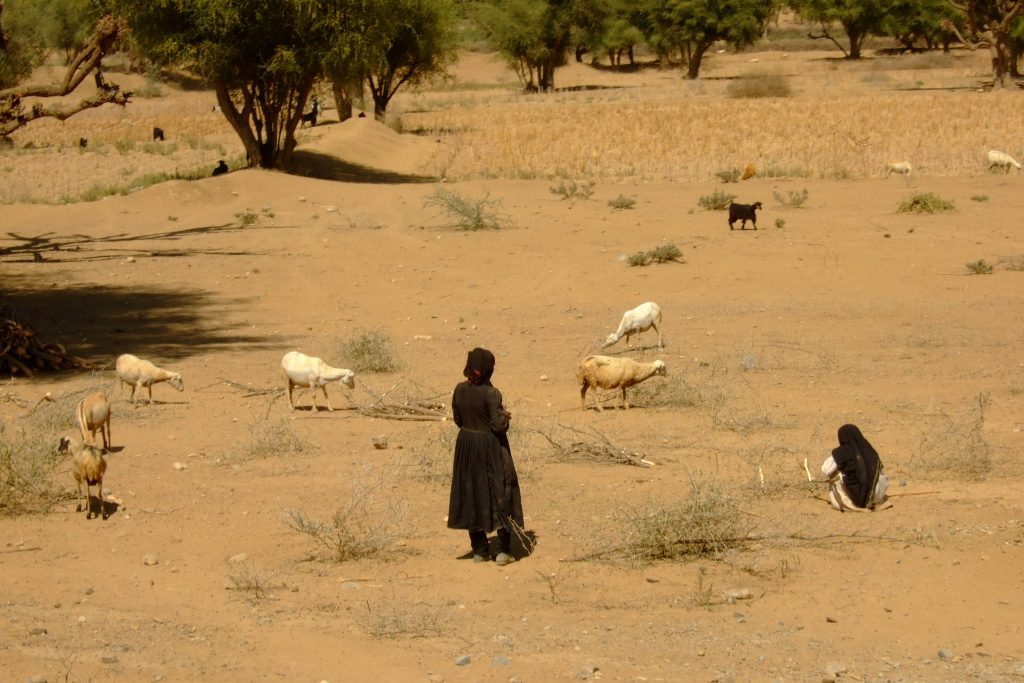 The stated objective of the raid was to collect intelligence. Almost a week after the raid, the Pentagon released the “valuable intel” they supposedly secured during the raid: a video of a masked man detailing how to kill Americans [10]. Turns out, the video was actually 10 years old [11] and “mistakenly” posted by the Pentagon. Only recently, the actual secret objective [12] was revealed: to kill or capture the current head of AQAP, Qassim al-Rimi. He escaped unharmed and has since released an audio message taunting [13] the United States. “The White House’s new fool has received a painful blow at your hands in his first outing on your land,” al-Rimi reportedly said.

In his first public statement since joining the Trump administration, national security adviser Michael Flynn said the U.S. government was “officially putting Iran on notice [14]” after an Iranian missile test and a Houthi attack on a Saudi warship [15]. The Houthis are Shia rebels who took control of Yemen and have been the target of a brutal bombing campaign [16] by their northern neighbor, predominantly Sunni Saudi Arabia. 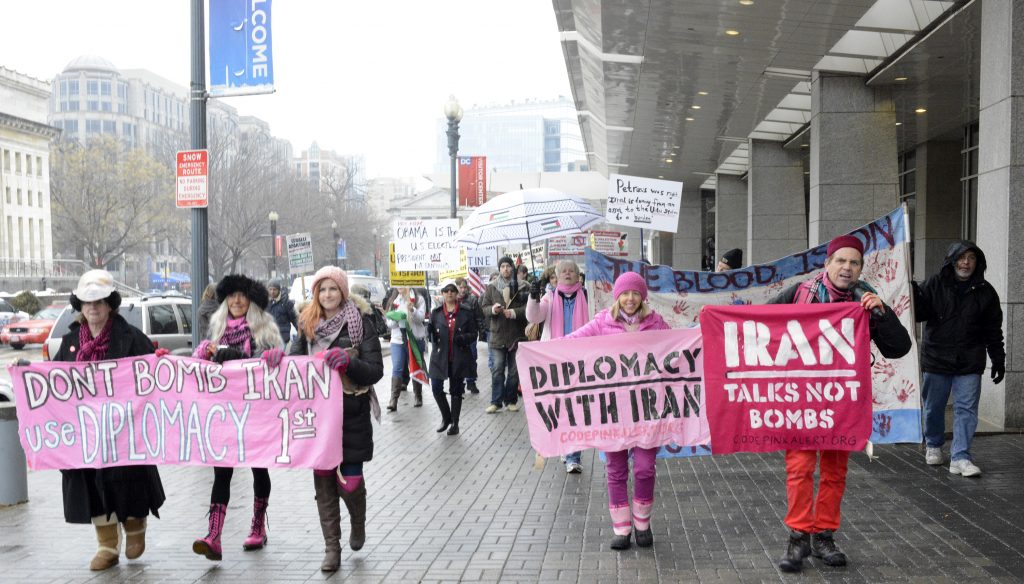 This little alternative fact came on the heels of tough talk toward Iran for carrying out a missile test that is not in violation [19] of any U.N. resolutions. To conflate Iran with the Houthi rebels — who represent a movement independent of Iran [20] — and a Saudi warship with a U.S. naval vessel exposes the government’s actual view of the Saudi-Yemeni war: Saudi interests are U.S. interests and the mutual enemy is Iran.

What makes this all the more frightening is that this seemingly innocuous error may be a purposeful lie to build the case for war against Iran. It’s not the first time that the U.S. has gone to war on a false pretense: the blast on the USS Maine [21] that led to the Spanish-American War in 1898; the Gulf of Tonkin resolution [22] that launched the U.S. into the Vietnam War; and Saddam Hussein’s nonexistent weapons of mass destruction [23] that launched the U.S. into a continual mass destruction of Iraq and the Middle East.

As a Seattle (“so-called [24]”) judge put a temporary nationwide halt [25] on the “Muslim ban,” the White House officials began spinning their propaganda — and wheels — as they tried to change their tune. First, the Trump team tried to deny the ban was against Muslims. Trump claimed that his executive order was “not a Muslim ban [26],” despite calling it exactly that throughout his campaign [27] and it still being listed as such on his campaign website [28], where an entry from December 7, 2015, states: “Donald J. Trump is calling for a total and complete shutdown of Muslims entering the United States.” Then his pet surrogate, Rudy Giuliani, contradicted Trump when he told Fox News that Trump requested [29] “a Muslim ban,” but that it be done the “right way.”

The Trump team then tried to deny it was actually a ban. Spicer reprimanded [30] the media by claiming that only journalists were referring to the executive order as a “ban.” But, as a tweet [31] and ample video evidence [32] show, Trump and Spicer have used the word “ban” in reference to the, ahem, Muslim ban. 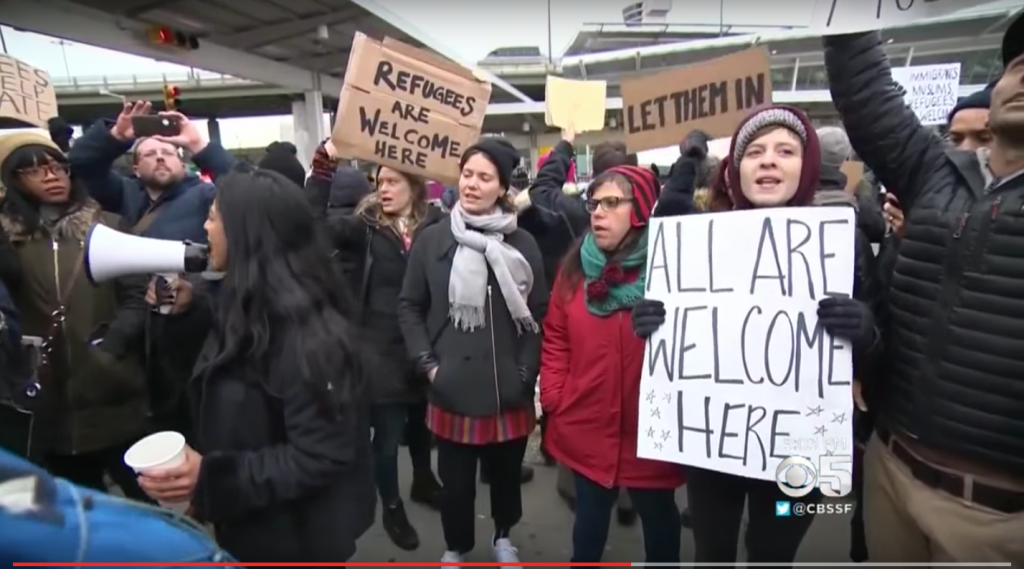 “There was no confusion,” Gorka claimed in an interview [34] with Jake Tapper.  In fact, Gorka, a former editor for Breitbart News who was caught carrying a weapon [35] through an airport last year, marveled at “how smoothly it was executed” — “it” being the ban that was widely protested [36], leading to lawsuits [37] against the White House with multiple judges [38] ruling against [39] it, and mass confusion at airports [40] on how to enforce it.

Yet, those who actually do the vetting have explained the painstakingly detailed and rigorous analysis [41] that defines the current process.

In an interview with Chris Matthews, Conway performed [42] one of her greatest magic tricks to date. Like the FBI [43], she created and exposed a massive terrorist attack in Bowling Green, Kentucky — that never actually happened. 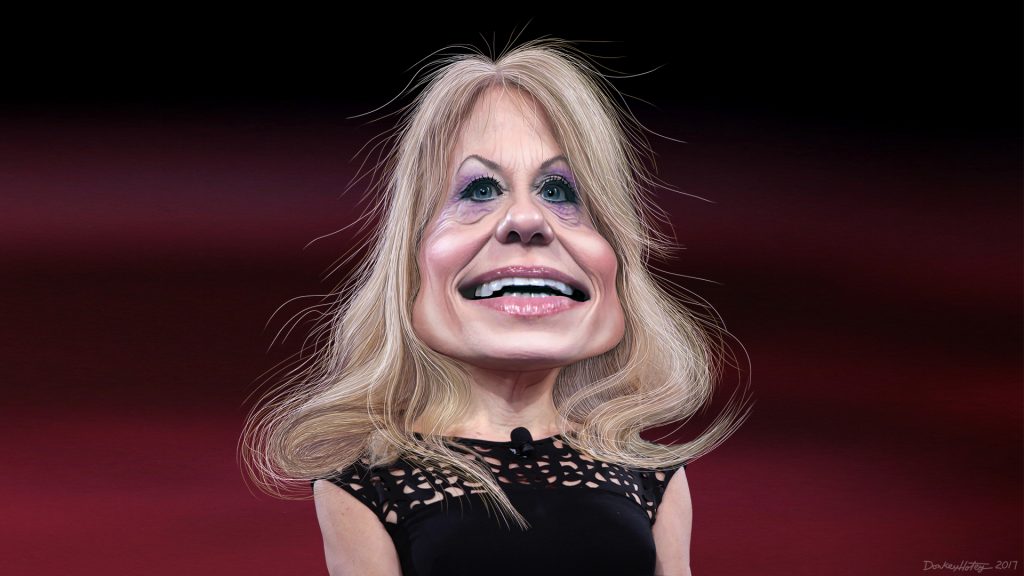 A caricature of Kellyanne Conway > FLICKR/DonkeyHotey  [44]

She is correct in stating that most people don’t know about it. And that it didn’t get covered. That’s because there never was a massacre. What Conway was egregiously inaccurate in referencing were the cases of Waad Ramadan Alwan and Mohanad Shareef Hammadi [45], two Iraqi nationals living in Bowling Green who were arrested in 2011 on multiple charges after an FBI sting operation.

Alwan, 30 at the time, told an FBI informant that he had created and planted improvised explosive devices (IEDs) when he was in Iraq, targeting U.S. soldiers. The informant encouraged [46] Alwan to recruit others in sending weapons and money to Iraq. Hammadi, then 23, took the bait offered by Alwan. Despite their cases following all the hallmarks of the FBI’s terrorist entrapment stings revealed in detail by journalist Trevor Aaronson in his book The Terror Factory: Inside the FBI’s Manufactured War on Terrorism [47] — the use of a provocateur informant, setting up targets to falsely send weapons or money to a foreign threat, conviction on the ambiguous “material support of terrorism” charge — Alwan and Hammadi were convicted [48] in 2013, Alwan to 40 years in federal prison and Hammadi, who was lured by Alwan, to a life sentence.

After others called Conway to task for her grand lie, she later complained that she simply “misspoke one word [49]” and was unfairly maligned. She meant to say “terrorists” instead of “massacre.” But if you were to replace those words in her statement, it would have made less sense than her original lie. The most disturbing part of the whole interview was that Matthews moved on to his next question, letting her bold lie go unchallenged.

And if that weren’t bad enough, Trump has doubled-down again on the blatant lies by attacking the news media for covering up terrorist attacks [50], a lie propagated by the fringe-right [51] “news” site InfoWars. “It’s gotten to a point where it’s not even being reported. And in many cases, the very, very dishonest press doesn’t want to report it. They have their reasons, and you understand that,” Trump said, addressing U.S. Central Command.

After almost two years of Trump’s campaigning and two weeks of his presidential propaganda, it looks like the multiple sexual and mental side-effects [52] of finasteride — hair-enhancing pills better known as Propecia — that Trump takes to maintain the awkward nest he considers his hair, are finally taking root. Maybe he should join the almost 1,400 lawsuits against Propecia’s proprietor [53] and sue Merck too. The entire American public — nay, entire world — could testify to the horrible damage it has caused. Maybe Trump could even get Frederick Douglass to take up the case. I’ve heard he’s been doing “an amazing job [54].”