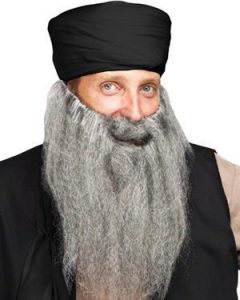 In today’s modern world, there always seems to be a trend going around. They tap people on the shoulder. They dilly-dally for a bit, and then take off.

Unfortunately, it seems as though this year, the hottest trend took place during Halloween – and you know what that means. Offensive Halloween costumes. The holiday of Halloween has evolved from dressing up as fictional beings to widespread disregard of cultures. This has been seen in various forms, as of late.

Let’s start off with blackface [1], which, for some bizarre, incomprehensible reason, is still existent. Next on the list is Janay and Ray Rice’s horrid situation, which was no joke. To make matters worse, there are now multiple enthusiasts [2] across the United States that are fashionably donning football jerseys and sporting black eyes. To continue down the list, we would also have to hit both “Ebola costumes” [3] and ISIS costumes [4] – and thus, ah: we get to a trend that, unfortunately, seems to increase in popularity as the days pass by: cultural appropriation.

This year, it seems Walmart has definitely set its brainstorm levels to an all-time high. This October, they decided to advertise a Men’s Pashtun Papa Costume [5].

As a first generation Afghan-American, this piece of news drew me in for many reasons. Strangely enough, I became attracted to this information due to the fact that most of it is complete bogus. Let us, for a moment, disregard the immense amount of cultural appropriation in this costume, and pick it apart, shall we?

Geography aside, let us take in the part of the description in which Walmart claims that the costume “represent[s] the Middle East.” Not only is this an utter generalization of an enormous group of people, it also implies that all cultures that could possibly be associated with this costume, whether they be Afghan, Saudi, or Egyptian, remain unprofessional and out-of-date in the face of the modern world. Of course, this is not the case, but take a moment and imagine what it is like to be on the receiving end of such an implication. Unfortunately, with how Afghanistan and other predominantly Muslim countries are introduced in today’s media, many do not have trouble believing in our “antimodern customs.”

While we are on the note of portrayal of ethnic groups, Pashtuns are not the only Afghans who regularly don this type of clothing.

Because the perfect way to make a “serious political statement” is to don a culturally respectful costume and walk the streets on a day where everybody has dressed up.

“Shock your friends with this Islamic costume.”

As discussed earlier, the Pashtuns are an ethnic group based primarily in Afghanistan and Pakistan. True, both countries have a predominantly Muslim population – but does make this outfit “Islamic?” The answer is simple. No. This outfit does not represent the religion of Islam in no way, shape, or form – and while we are on that note, Walmart – learn to differentiate between culture, ethnicity, and religion.

And now, let’s practice some repetition:

Either this description is more conflicting than we originally thought, or a Walmart employee just blatantly gave out his/her opinion on Muslims.

“Nothing is sacred this Halloween.”

Pashtun clothing is not “sacred.” Again, there should be a differentiation between religion and culture – but also, why would the description include that statement at all? Reading in between the lines, the argument can be made that that very assertion encourages a disregard for others, their cultures, and their religions. Nothing is sacred this Halloween. Go big, and go uncivil.

And finally, the straws that broke the camel’s back.

First of all, the item of cloth sitting on the man’s head is definitely not a turban. Second of all, if this were truly culturally accurate at all, the outfit would instead contain a pakol, which is a traditional hat that many Afghan men wear throughout the country.

It’s also a bit strange that they call this item a “costume” – it is not a costume, it is traditional dress. And why is the word “Papa” tossed into the official name?.

The specific components of the item’s purpose and description are almost worse than the cultural appropriation itself, it seems – the latter is now simply the tip of the iceberg.