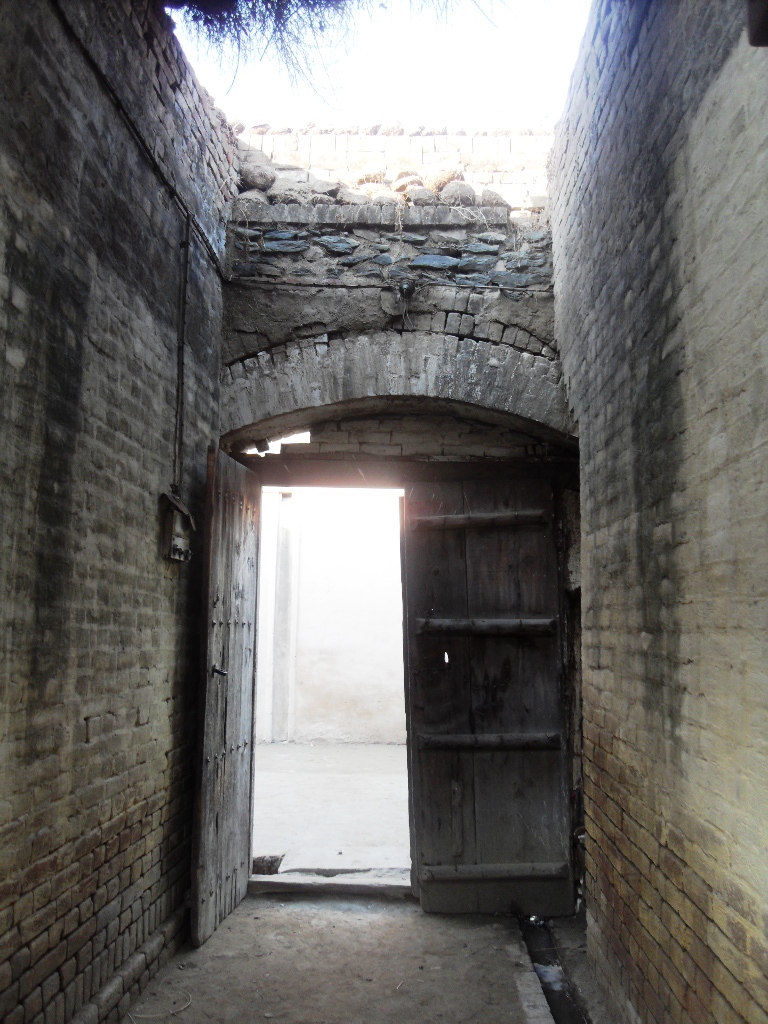 The door to the author's great-grandparents' house in Attock, Pakistan.

The journey that members of diaspora communities make when they travel “back home” — to that nebulous country our DNA anchors its genetic roots into — is a lot like the one that monarch butterflies make every year.

These insects that barely fit into one’s palm fly over 2,000 miles from North America to central Mexico, seeking out warmer temperatures during autumn. What’s mind-blowing is that four successive generations of monarch butterflies will migrate to the same trees, which suggests they have a genetic memory that allows them to remember where to go.

They might be insects, but the yearning for the warmth of home is ingrained into their very DNA, a commonality they share with humans. 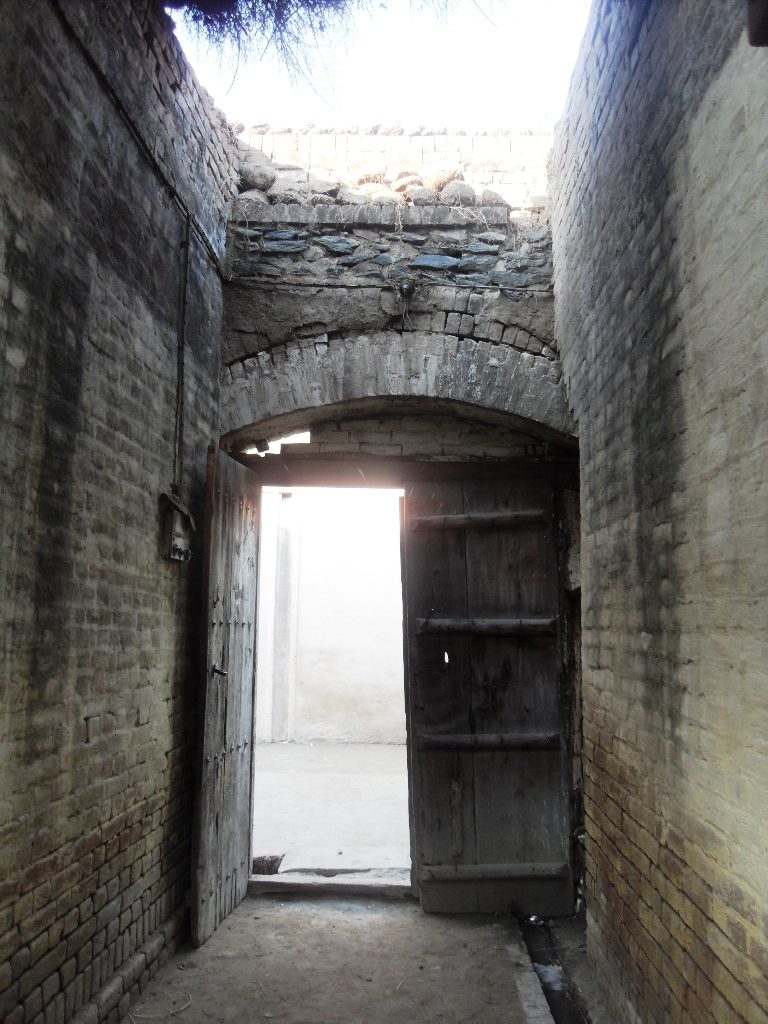 The door to the author’s great-grandparents’ house in Waisa, Attock, Pakistan.

On the 5th of January 1962, my then 16-year-old grandfather, Ghulam Akbar, migrated from Pakistan to the northern city of Bradford in the United Kingdom. He was among a wave of countless economic migrants looking to fulfil the British equivalent of the American dream. But his new “home” was miserly in its welcome; compared with the intense summer heat of Pakistan, the bleak northern winter weather of Bradford was a complete shock to him. Snow, a novelty to a boy who grew up in a village where their winter was our British summer, now blanketed the streets outside where he lived. The black smoke plumes spewing out of chimneys from industrial mills not only blackened the bricks of the city, but his spirits as well.

After years of gruelling work in the mills and attending adult evening classes learning English in the local college, my grandfather finally secured a job as a bus conductor with the local transport company. He returned to Pakistan in 1967 to marry my grandmother, and they came back to the U.K. together soon after. While my grandfather came from an unusually small two-child family (small because his father fought in World War II and was killed only seven days after my grandfather was born), my grandmother came from a very large family of 10 siblings. The feeling of isolation and the gravitational pull of home was in some ways much more potent for her than it was for him. Letters they received every month or so from relatives in Pakistan would evoke memories of the warmth of family and the familiarity of home, which had now become a distant past for them both. Like many of the foundation builders of the diaspora generation, they had no choice but to confront the cold, bleak present that faced them in the brave new world they now called home.

Four years ago, I made my own journey “back home” to Pakistan. As with many individuals who descend from diaspora communities, my relationship with the motherland is a tenuous one. Constantly juggling multiple identities — British, Pakistani, Pashtun, Muslim — can leave you feeling like you belong in an alien country whose borders are found in the space between “home” and “back home.”

On my trip, I didn’t undergo an identity renaissance and emerge as a born-again Pakistani. It was a journey that instead allowed me to reconnect with my great-grandparents, a generation whose names survive only on gravestones and on the tongues of those who knew them.

The Pakistan of my great-grandparents’ lifetime was probably one that looked like it belonged in a black-and-white movie. 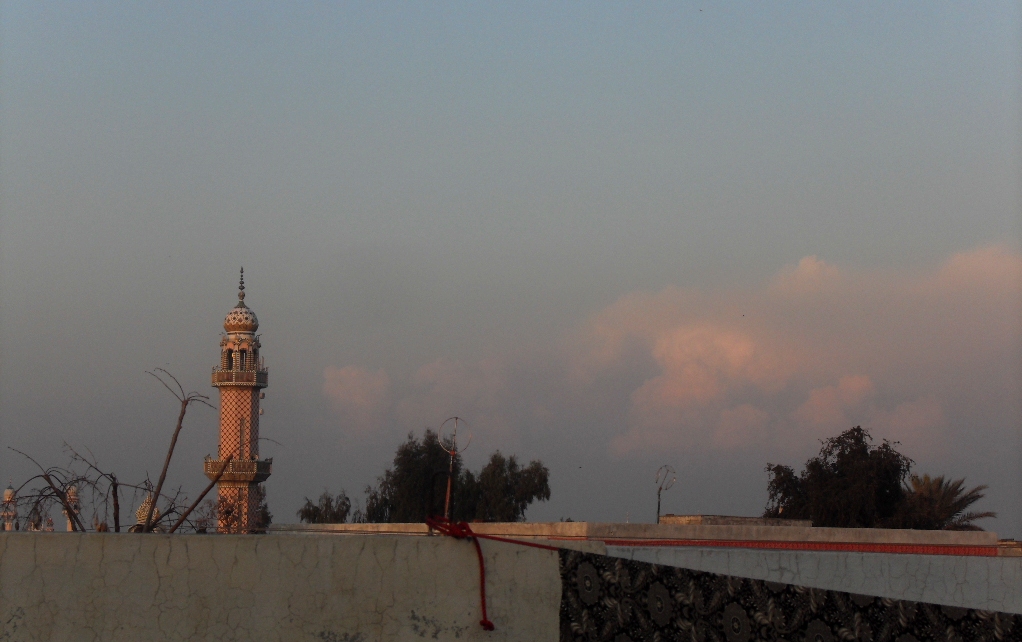 The skyline of Waisa, Attock, where much has changed, but has still stayed the same over the years.

The sleepy village of Waisa, Attock, where they were born, was one where the only buildings dominating the horizon were the minarets of mosques. You can imagine the aroma of cardamom and boiled milk wafting along the streets from the chai wallah’s teapots; the shop vendor grinning at you with his toothless smile as he pushes his wooden cart laden with goods; the sound of the athaan (call to prayer) making your hairs stand on end as it floats down from a lofty minaret.

Fast forward a few decades and the toothless shop vendors, chai wallay, muezzins and minaret-encrusted horizon remained. But the small village was suddenly thrust into the world of Technicolor, and it began adopting the modern phenomenon of expanding vertically.

Thanks to the burgeoning wealth of Pakistanis living abroad, ostentatious mansions whispering of diaspora dreams began to erupt from the village’s dusty roadsides. Houses once built with brick, wood and stone began sprouting glass windows and elaborate marble features that could be seen glinting like a magpie’s treasure from the rooftops.

The diaspora generation’s investment in these homes has always been a source of fascination for me. After all, if they no longer lived there, why would they pump so much money into these second homes? In my family’s case, there’s no doubt the investment was to improve the standards of living of family members left behind. But I think at the crux of it all, at least in my grandparents’ case, it was in the hope that they would return to the comfort of these homes when they retired.

Perhaps they felt like they never really belonged in their “host” country. But I think that with children anchoring them down to the U.K., no matter how much they wanted to go “back home,” they became torn between two countries. The houses they invested in so heavily in the motherland now remained unoccupied for the most part, until they made an annual visit for a month or so when the call to home becomes too strong.

Very few houses withstood the Midas touch of diaspora Pakistanis who followed the gold-paved, yellow-brick road all the way to the promised land of the West.

And it just so happens that my great-grandparents’ home was one of them. 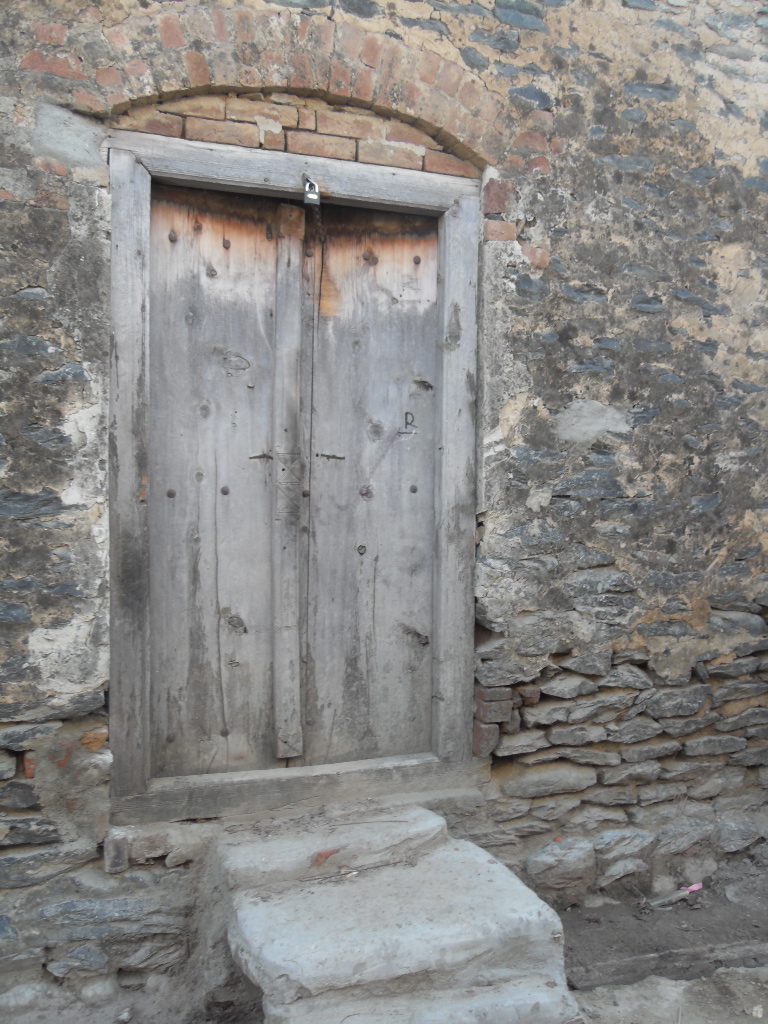 The doorway to the author’s great-grandparents’ home is the original door they used when they were alive.

The doorway is the very same door they used when they lived there. It has been over four decades since they passed away, yet it continues to greet generations of young and old who come knocking.

I felt more of a connection to my ancestors standing outside their home than I did standing beside their graves. Apart from their daughter, my maternal grandmother (or Bibi as I call her), this door and their home became the only tangible connection I had to a generation I’d never met. I’d gained entry into a lost world of mysterious old doors, cobweb-covered houses and clay ovens.

I could imagine my great-grandfather selling the wares from his corner shop near the entrance. I could smell the scent of fresh roti as my great-grandmother stooped to turn them over in her clay oven. I could see my Bibi as a young girl, running barefoot with the wind in her hair and not a care in the world.

Bibi’s childhood home was a diaspora museum for me, a gateway to my past, to the country’s rural roots. But for her, the one who left for another land, it had become a debris of long-lost memories, dreams, and of death.

Until the day he died, Bibi’s brother — the sole occupier of the house — made sure it was never altered or even cleaned. Here was a man who was left behind by the diaspora and by death. As time marched on, he ensured that successive generations would hear the whispers of an innocent period when time stood still. He preserved the house exactly as his parents had left it, as if doing so would keep their memory alive. 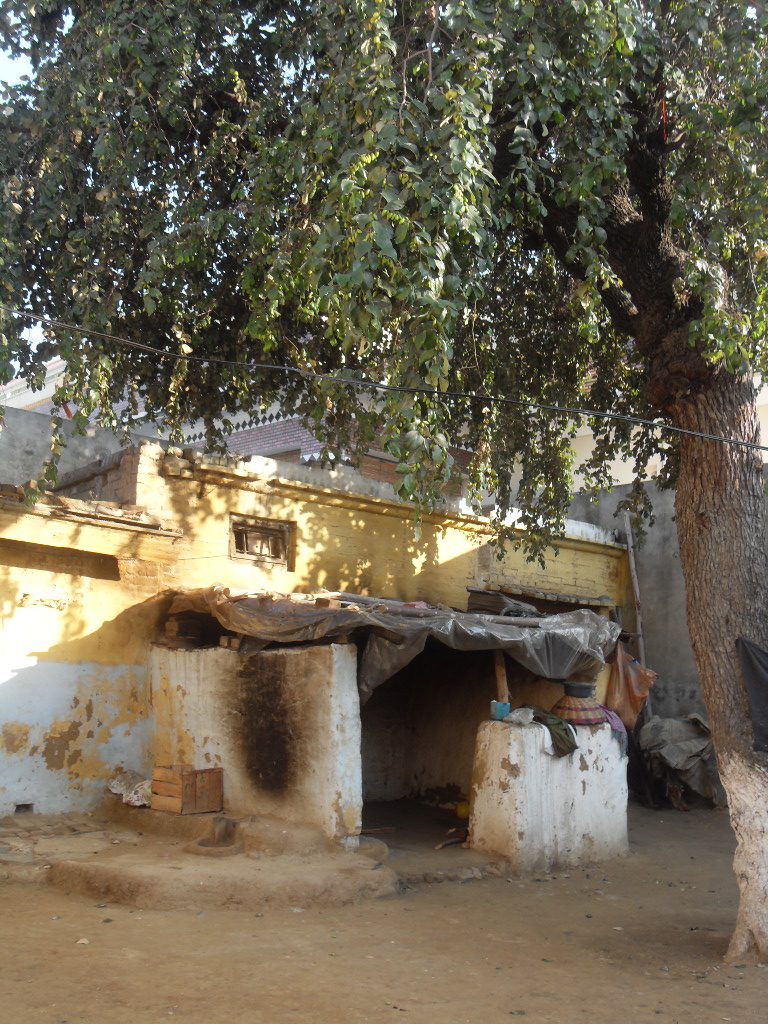 Every part of the author’s great-grandparents’ home was preserved by their son.

For a man who was well over 60 — his age blatantly visible on the many wrinkles bursting out from the corner of his eyes and from his bristly silver beard — you would have thought any childish attachment he had to his parents dissipated with age.

But some bonds of love, especially between a parent and a child, are too strong to be broken by death and the passage of time.

I asked Bibi once how it felt to know she would never see her parents at home again. She said that every time she walked past her old home, she would fix her eyes straight ahead to avoid looking at it. A part of her longed to see her father, or “Jee” as she called him, sitting near the entrance soaking in the sunlight as he used to do when he was alive. But whenever she dared to look up, he was never there.

She told me they passed away within the space of a month of each other, the only reason being because one couldn’t live without the other. One truly can die of a broken heart. 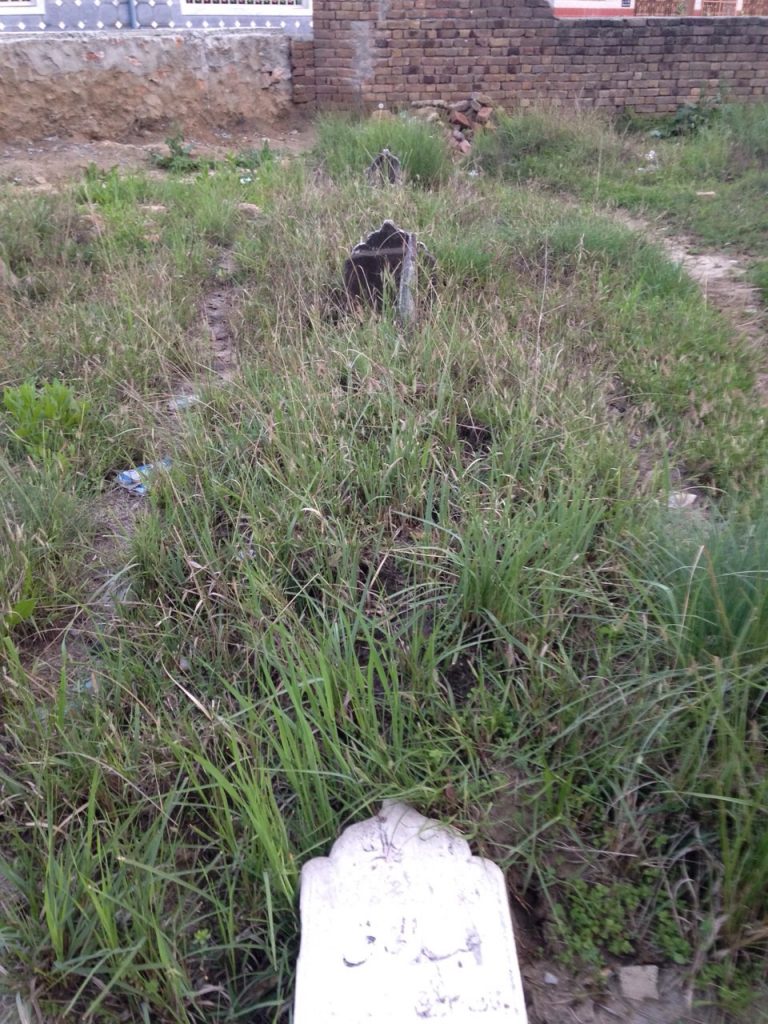 Although it has been over 40 years since they passed away, the grief still wells up in Bibi’s eyes as if they had died only yesterday. When she left her homeland for the U.K., one of the things Bibi feared most was not being there when her parents died. Unfortunately, that’s exactly what happened. It’s one of the curses of being part of the diaspora. At the time Bibi’s parents passed away, she was pregnant. My grandmother’s sister was genuinely concerned Bibi might miscarry because of the shock, that she broke the news to Bibi months after she had given birth. Still, Bibi told me that even before she had been told of her parents’ passing, she somehow already knew. On the day her father died, she felt an inexplicable sense of sadness overwhelm her, as if there was a severance of an invisible cord that connected her to him. The dictionary mainly associates the word “orphan” with children, but Bibi said that on that day, she — an adult woman with children of her own — felt as lost as child who had just lost her protectors.

It’s the most unusual thing, mourning for the loss of a generation I’ve never met. For a while, I swam in an ocean of regret for all the love, wisdom and stories I missed out on.

But I’m thankful Bibi is still here to share her culinary skills, stories, countless prayers and never-ending Yoda-like quips to a lost lamb like myself. Both she and I are continuing my great-grandparents’ story in some small way.

Someday, the diaspora museums we visit will eventually shut their doors. I don’t know whether my great-grandchildren will remember me in the same way I remember my great-grandparents. But in the end, all we can hope for is to leave a legacy not in the form of houses, empty accolades or achievements, but in the way of timeless love. 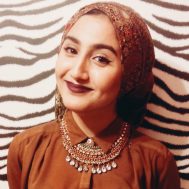 Aina Khan is an English Language graduate from the U.K.