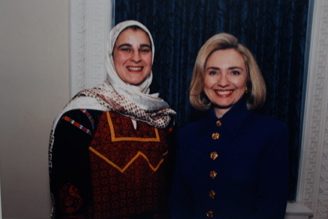 The author and Hillary Clinton >Photo courtesy of Manal Omar

Hillary Clinton, a history of firsts

The first time I entered the White House was at the invitation of first lady Hillary Clinton in 1996. As a fresh college graduate, I struggled to determine what to wear for such an occasion. In the end, I chose to wear the traditional Palestinian embroidered dress. When it was my turn to shake her hand in the meet-and-greet line, she commented on how beautiful my dress was and told me about her visit to the West Bank.

As a budding young women’s rights activist, I watched her career flourish and was struck by her commitment to use her position as first lady to become an independent political figure, create positive change and inspire young women in her own right.

As first lady, Clinton marked a historic occasion for American Muslim participation in civic engagement. This was when decades of appeals by activists working to be acknowledged as being part of the social fabric of the American community had fallen on deaf ears.

Hillary Clinton addressed her guests at the 1996 celebration, saying, “It is only fitting. Just as children and families of other faiths have come here to celebrate some of their holy days, so you too are all here to mark this important Islamic tradition.”

And thus a modern day White House tradition was set. It was the first time the White House had invited American Muslims, as opposed to foreign dignitaries, for the celebration of the holy month of Ramadan. This was building on a tradition that centuries before had been initiated by Thomas Jefferson to honor the visit of the Tunisian envoy Sidi Soliman Mellimelli to the United States.

So, long before Hillary Clinton decided to run for president, she marked a historic and long overdue first for me. Likewise, Hillary was the first political leader from the White House to be willing to acknowledge the right of Palestinian statehood as first lady. Her passion caused her to go off script when speaking with a group of Israeli and Palestinian youth for Seeds of Peace, and refer to Palestine as a country. When questioned about referring to a country that does not exist, she responded by saying that the creation of a Palestinian state would be key to peace and the “long-term interest of the Middle East.”

This did not come without consequences and she received condemnation from Israeli and US policymakers alike. This did not discourage her from one year later attending a speech given by Suha Arafat, the wife of Palestinian leader Yasser Arafat on her trip to the Middle East. The photo of Hillary kissing Suha on the cheek (the customary greeting in the region) created a political nightmare and threated her Senate race in New York City.

It goes without saying, 20 years later, Hillary Rodham Clinton is not the same woman she was as first lady. I know I am not. For good and bad, time and experience change us. Over the past two decades, I have had the opportunity to be in the same room with her under different circumstances, and each experience has left a profound impact on me.

One of the most significant changes that took place for me was leaving behind my naïve approach to politics. I grew to appreciate that no politician will survive the purity test. An iron price is often paid to enter the political world. I choose to consider Hillary’s AIPAC speech or her track record making hard compromises during negotiations as a senator to be the iron price paid for establishing a political career. But in a world dominated by cynicism, I also choose to hold on to my idealist instincts that a foundation never changes despite compromises. I believe Hillary’s commitment to peace in the Middle East, her positive view of American Muslims and the Muslim world at large, and her dedication to women’s issues will always serve as a core of who she is.

And my belief is not unfounded.

As secretary of state, Hillary guided the State Department into providing reconstructive and humanitarian aid for Gaza in 2009, stressing the importance of building a peaceful society and establishing a separate Palestinian state. In her position as secretary of state, she was known not to pander to Netanyahu, and openly clashed with his policies. Stories abound of an “exasperated Clinton” banging her cellphone after calling on Netanyahu to freeze settlement or the Israeli leader’s name often being attached to the f-word.

Contrary to the perception that Hillary is hawkish and prone to supporting military intervention, the Democratic nominee has decades of experience in working on Middle East issues relating to peace, security and development. Her approach of 3 D’s not only discusses defense, but also emphasizes development and diplomacy. The difference in a Hillary Clinton approach to the conflict in the Middle East is that it will not be piecemeal. It will be a holistic approach that works on the three pillars of government, with a leader who has had a front row seat to our successes and failures of the past 15 years.

Furthermore, Hillary continues to have a strong record of engaging the American Muslim community. Along with President Barack Obama, no other US political leader has brought on members of the community with such force. American Muslims have served in high-level roles under Hillary both in the White House and State Department. Huma Abedin, the vice chairwoman for Hillary’s presidential campaign and former deputy chief of staff at the State Department under Hillary, is one of many Muslim leaders who have a prominent role in policymaking due to her work with Clinton. Hillary also appointed Farah Anwar Pandith as the first special representative to Muslim communities for the Department of State, a position Clinton took the initiative to create under the Obama administration while she was secretary of state.

Her appointments were not only at senior levels. Hillary brought in countless talented American Muslims — including Shahed Amanullah, founder of Zabihah and co-founder and chief technology officer of Affinis Labs —to serve alongside others to help make this country better. Amanullah explains:

“No American politician, save possibly President Obama, has brought more talented Muslims into public service than Hillary Clinton. Starting with her trip to Beijing in 1995, where she sought out and included American Muslim women as part of her delegation, to her loyal reliance on Huma Abedin, a proud American Muslim woman who carries her position with dignity and grace despite numerous attacks, to the dozens of American Muslims she recruited and hired at the State Department during her last tenure, Hillary Clinton has never seen American Muslims as an afterthought, but a valuable resource from the very beginning of her political career.”

Amanullah points out this was further confirmed during the Democratic National Convention in Philadelphia, as the Clinton campaign intentionally positioned three tributes by/for American Muslims in prime time before Chelsea Clinton introduced her mother: a powerful speech by “basketball star-turned-statesman Kareem Abdul-Jabbar, who laid full claim to Thomas Jefferson’s legacy defending freedom of religion; a recording of an oft-repeated stump speech by Hillary recounting the death of Captain Humayun Khan … who sacrificed his life so that his fellow soldiers could escape harm; and last but not least, the father of Captain Khan, Khizr Khan figuratively knocking out the bully Donald Trump with a Constitution-laden blow, representing so many American Muslims who endured having sand kicked in our faces for too long.”

Amanullah continues: “It is part of a continuing narrative that I witnessed personally working in Secretary Clinton’s bureau at the State Department for two years. She has always made it a priority to include those who have been on the margins, including American Muslims, even when the cameras weren’t rolling.”

So when I say #IamWithHer for November, I’m not saying it as a consolation prize to Bernie Sanders, or out of fear of Trump. I’m saying it because Hillary will make a historic and long overdue landmark in US history by becoming the first female president. I am saying it because she has proven her ability to handle crisis through a multidirectional approach that includes both strength and diplomacy as needed. Most importantly, I’m saying it because since the very beginning, she has moved beyond lip service to include the American Muslim community into public service for their country. I’m saying it because I trust her to be part of the change we need.‬

Manal has over fifteen years working in the field of women's rights, peacebuilding, humanitarian aid, and development.