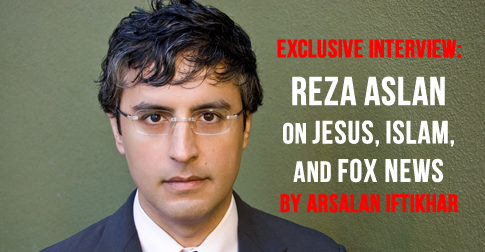 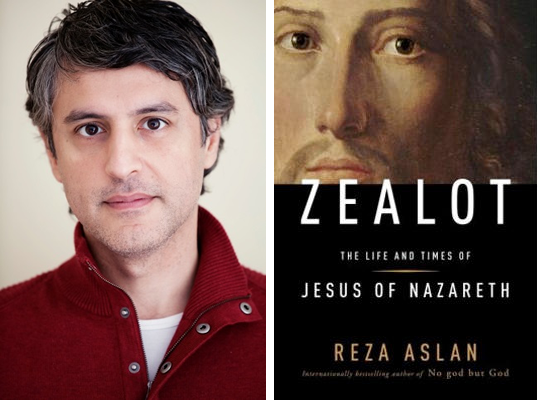 Shortly after releasing his new book Zealot: The Life and Times of Jesus of Nazareth, award-winning author Reza Aslan joined The Islamic Monthly for an exclusive interview with senior editor Arsalan Iftikhar to discuss topics like his conversion to evangelical Christianity at the age of 15, his thoughts on the overall reception to his latest book on the life of Jesus, and his own personal feelings about the world-famous FOX News television interview which became an instant global viral sensation and helped thrust his book to #1 on Amazon’s best-sellers list.

ARSALAN IFTIKHAR (The Islamic Monthly Magazine): In the first few pages of your book (and also during your July 2013 interview on The Daily Show on Comedy Central), you happen to mention that you once converted to evangelical Christianity at the age of 15.

Since many people tend to only identify you as a Muslim and may not have known this interesting fact about your life, could you please provide our readers with an insight and context into your time as an evangelical Christian and how that time during your life helped shape the faith which you practice today?

REZA ASLAN: I did not grow up with a lot of religious instruction, though I was always a deeply spiritual kid. After my family fled to the United States, we more or less scrubbed our lives of any trace of Islam. I had no outlet for my spiritual needs- until in high school- I heard the gospel story for the first time. It had a profound effect on me. I became an evangelical Christian and began sharing the gospel with everyone I knew.

When I started studying the New Testament in college, I moved away from my Christian faith and became sort of spiritually unmoored as a result. Thanks to the encouragement of the Jesuit Catholic priests I studied with at Santa Clara University, I began exploring Islam again with fresh eyes.

But while my spirituality was now immersed in Islam, I was still deeply interested in Jesus of Nazareth as a person. The more I studied him and the world in which he lived, the more I wanted to shape my values and my actions around his remarkable example of fighting for the poor and the dispossessed against the religious and political powers of the day.

Of course, this is exactly what the Prophet Muhammad did, too, as I write in No God but God.

Like Jesus, the Prophet Muhammad’s ministry was founded upon care for those who could not care for themselves. This should be a reminder to us all that no matter what God we worship, the message of all the prophets from the beginning of time has always been about social justice for the meek and the poor.

ARSALAN IFTIKHAR: During your very well-known FOX News interview with “religion correspondent” Lauren Green, you also mentioned that your book Zealot also “overturns pretty much everything that Islam also thinks about Jesus as well”.

As you know, most Muslims believe that Jesus was not crucified and God actually ascended his body to heaven. Islam also teaches Muslims to believe in the virgin birth of Jesus.

In your own words, can you please explain how your beliefs about Jesus might be different than the basic mainstream Islamic teachings on Jesus and his life?

REZA ASLAN: As I have mentioned in my interviews, my research into the historical Jesus confirms that he was crucified and really questions the historicity of the virgin birth.

Of course, these are equally matters of faith as they are matters of history, and anyone who believes in the Islamic teachings of Jesus and his life need not be bothered by an academic study of them.

The job of the scholar and historian, however, is to analyze the claims made by the scriptures according to the facts of history. In the case of the Islamic belief that someone else instead of Jesus was crucified in his place, we can trace that notion to Gnostic ideas about Jesus that go all the way back to the second century.

Many Gnostics believed that Jesus was nothing more than a divine spirit, that his flesh and blood was just a figment of the imagination. They therefore refused to believe that he could have been crucified and so put forth the notion that someone else was crucified in his place.

After the Roman Empire adopted Orthodox Christianity as the state religion, these Gnostics were forced to flee Rome for the lands of the Middle East, North Africa, and the Arabian Peninsula- where many of them settled in modern-day Yemen.

It is no exaggeration to say that most of the Christians in the Arabian Peninsula during the time of the Prophet Mohammed would have known and would have believed this Gnostic view of Jesus. That is likely how this view became part of Islamic doctrine. Now, if you are a Muslim who believes that there can be no historical context to the Prophet Mohammed’s message, just as many Christians believe there can be no historical context to Jesus’s message, what I am saying might disturb you.

But I have to go back to the fundamental differentiation between faith and scholarship, religion and history. Faith says Jesus wasn’t crucified. History says he was crucified.

ARSALAN IFTIKHAR: Now that your book is currently #1 on the Amazon “Best Sellers List” and your FOX News interview has gone viral around the world and has been featured in places like BuzzFeed, CNN, The New Yorker and more, can you tell our readers a little bit about the reaction that you have gotten since the “interview heard around the world”?

REZA ASLAN: My biggest hope for this book is that it shows people that you can be a follower of Jesus without necessarily being a Christian. The best part about the whole FOXNews debacle is that it is allowed this book to become embraced by readers who would normally not read a book about Jesus.

That is a good thing because no matter what you believe about Jesus of Nazareth, the fact of the matter is that he was in incredibly charismatic and interesting person. He was, to put it simply, someone worth knowing about.

For more information, you can buy Reza Aslan’s new book Zealot: The Life and Times of Jesus of Nazareth on Amazon.com.