ISIS Propaganda and How to Counter It

In Egyptian mythology, Isis is the goddess of motherhood and patroness of nature and magic. She flew over the Nile Valley and collected the shredded parts of the god Osiris who was de-throned and brutally killed by his brother Set. Isis restored him back to life.

Today, there is another Isis, and having grown up in Egypt, I find the shared name of the goddess and the extremist rebel group as striking.

How has the contemporary ISIS (Islamic State of Iraq and Syria or  newly-named Islamic State) managed to propagate its ideology?

Over the past year, ISIS has distributed its propaganda through a network of users on YouTube, Twitter, Google+ and Tumblr. The organization has capitalized on new media.

Mimicking a scene in a war game, the video starts with an aerial shot of Kobane. Spotlights illuminate the Turkish borders. “A drone of the Islamic State Army” is hovering over Kobane. We hear machine-guns, indicating that the battle is “going on.” The small black banner on the top right frames the whole thing as an ISIS “show” or “event.” John Cantlie appears from a small frame on the map, as if ISIS is talking to us.

The language used by John Cantlie is no less expressive. ISIS’s fighters are depicted as “mopping up now, street to street and building to building” and urban warfare is represented as a “speciality” of ISIS’s fighters.

Similar to the videos, nasheed, an Islamic musical chant (a prototype is a cappella–not accompanied by musical instruments), is commonly used by ISIS to perpetuate its ideology.

ISIS’s nasheeds are “innovative” in one respect: they are drenched in echo and weaves graphic and sound effects into its fabric.

In one of their latest, titled El Nasr Tawala (translated to: victories are unfolding), on Youtube on photo runs throughout the video. 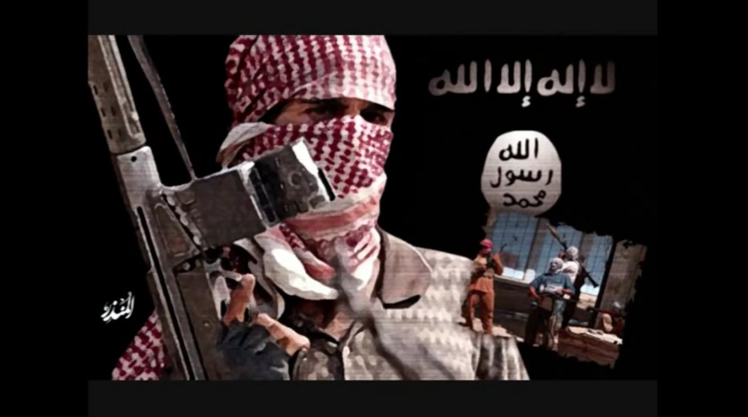 The picture is complex and has many layers. The background is black and bears the banner of ISIS, on the top right. Underneath the banner,  a small picture of ISIS’s fighters overlays the larger one. One fighter holds an RPG- ambiguously aimed at the banner of ISIS and towards the man who serves as the central figure of the picture.

The lyrics seem to address the man, instigating him to “hold” the “gun” and “fight.” The man gazes at the distance beyond what we can see in the picture’s frame. His eyes betray a determined expression. Towards the middle of the nasheed, horse whinnying sound effect culminates and swords are being unsheathed, as if in a battle in the Middle Ages.

This manipulative embedding of verbal language, visual and sound effects (and the conflation between the past and the present) means that, to a few, the role of the man in the picture and his meaning in life may be transformed. He may no longer be seen as a terrorist (as he should be) but rather a “hero.”

ISIS’s media outputs have effectively manipulated religion and language through the use of audio-visual effects to attract followers and potential terrorists to its ideology.

How can we, as a global Muslim community, counter such propaganda?

First, let’s agree that radicalization is a complex process and has many elements to it: socio-economic inequalities, practices of exclusion and marginalization.

Yet, the emergence of ISIS and other militant groups brings home the idea that it is time to foster a critical approach to the understanding of religious texts.

A call for a critical approach

In Islamic history, the emergence of a critical interpretation to Quranic texts dates back to the eight century. The Mutzailah or the rationalists flourished in Iraq and abandoned religious interpretations that do not conform to reason.

In the contemporary eras, many scholars have called for a critical approach to the reading of scripture. Addressing the the legacy of  the well-known  scholar, Fazlur Rahman, University of Colorado religious studies professor, Frederick Denny, argues that central to Rahman’s critique is how:

“The Quran and the Hadith (Prophet’s sayings) were misconstrued by Muslim scholars in medieval  times, made into rigid and inflexible guides – for all time, as it were- and not recognized as the products of their own times and circumstances.“

One implication of Denny’s quotation is that religious texts have to be understood within the framework of the social and historical contexts in which they were produced. And, therefore, must be explored in new lights and re-interpreted.

Fazlur Rahman’s legacy can well be seen within a context of Muslim scholars in the West, who have engaged with a critical approach to the interpretation of  religious texts; London-based Zaiduddin Sardar and U.S. based Amina Wadud are prime examples.

In his writings, Sardar calls upon Muslims to revive the spirit of “debate and discussion, arguments and counter-arguments, literary textual criticism as well as scientific criticism (that) was a basic hallmark of the classical Muslim civilisation.” Wadud, a feminist and scholar of Quranic exegesis, has advocated a reading or re-reading of the Quran from a gender perspective.

Perhaps, one way to counter ISIS’s ideology is to revive the legacy of “critical Islam” and to further “popularize” the messages of scholars such as Wadud and Sardar. This can happen by giving these scholars, among others, more media attention as well as institutional and community support. 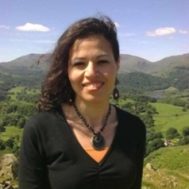 Shaimaa El Naggar is a Ph.D.