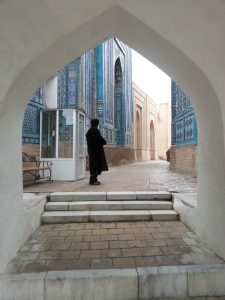 We hunched over and gingerly made our way up the narrow stairs to the top of a minaret, with little guidance from our small headlamp and many near-smacks of our foreheads. Through its barred windows we cooed at the walled town of Khiva, where a teal and blue domes pop up from the monochrome sand-colored city like a series of shiny buttons enticing a child to push them.

We felt so intrepid that I didn’t immediately believe what I saw below us. “Is that a wedding party?” I asked my travel partner.

It wasn’t even just one. We came across at least five pairs of brides and grooms in the alleyways of Khiva that day, making pilgrimages, we would learn, to the mausoleum of wrestler-poet-saint Pahlavon Mahmud, believed to bring fertility to young couples.

This was the twisted blessing that came from going to a place as hard to get to as Uzbekistan – and in January, to boot. For Central Asia still being off the imagination for many international travelers, we were more likely to happen upon locals enjoying their own beautiful heritage than a elbow-jostling crowds of foreign tourists.

One day, Silk Road cities like Khiva and the Registan complex of medressas (schools) and caravanserai of Samarkand will likely attract the crowds of equally magnificent locales like India’s Taj Mahal and Cambodia’s Angkor temples.

But for now, we found ourselves luxuriously alone as tourists in such splendid places, the only ones in chaikhanas who dined with a thick Russian phrase book by our side.

We arrived in Bishkek, Kyrgyzstan, a frosted valley town in January, While we roamed in four layers of outdoorswear, local women confidently jaywalked the icy streets in heeled boots. Un-presumptuous Bishkek, a valley of Soviet-block housing devoid of aesthetics and with a calm, small-town feel on the streets, has the odd distinction of hosting both a U.S. and Russian military base. 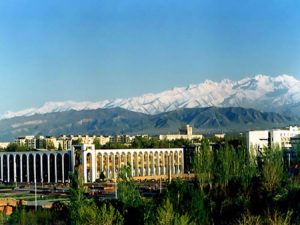 Bishkek is also a convenient doorway to Central Asia: With authoritarian rulers dragging their feet after the collapse of the Soviet Union, tourists have often been discouraged from coming to the region by the laborious visa applications that Central Asian countries require and, frankly, the offensiveness and discomforts of visiting a police state. (The most trouble we ever got into with the cops was when two smiling Kyrgyz officers insistently showed us their cell phones with “300 soms,” about six dollars in the local currency, written on it.) The good news for travelers, however, is that Kyrgyzstan last year became the first country in Central Asia to nix its visa requirement for many nationalities, making it an easy point of entry.

While Russian and Kyrgyz skiers packed the town of Karakol, an eight-hour trip from Bishkek that took us around the unfreezeable sky-blue Issyk-köl lake, we instead set off for the valley town of Altyn Arashan. We waded our way around knee-deep snow to a series of covered natural thermal hot baths. We perspired from the heat even as a sold glacier sat firmly frozen behind us. Anxious about stepping out in the zero-degree valley, I tightened my weatherproof jacket so tight around my face that only my eyes peered out; my travel partner, however, walked out bare-headed and quickly had a painful sheath of ice coating each ear. (We noticed on local TVs that weatherman stated negative temperatures just as numerals, taking care to note only when a temperature was indeed positive). 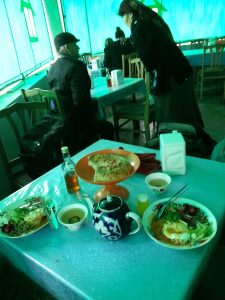 I naively expected the Kyrgyz to become as outraged with the cold as I did. The moment I was most overwhelmed by it was when we visited a small field hospital for multi-drug resistant tuberculosis in Kara-Suu, outside the city of Osh, in southern Kyrgyzstan. While I was eager to get inside and be out of the bitterly cold snow, patients instead happily came outside to meet us and speak freely without the facial masks the hospital required in closed quarters.

Crossing the border into Uzbekistan’s contentious Fergana Valley, as we did, was a reminder that the authoritarian state is still on edge after the 2005 Andijon massacre, in which hundreds of largely peaceful demonstrators were fired upon indiscriminately and killed by government forces. (The high-strung migration police asked for my travel partner’s USB drive and looked through his hundreds of photos and Portuguese documents one by one.) After the Andjon massacre, the government kicked out foreign reporters and NGOs, jailed human rights defenders and journalists, and cracked down on civil society. It is also routinely is the target of complaints and calls for boycotts from international human rights organizations for the government’s use of forced labor to harvest its cotton crop.

My impression over our time came to be that many Uzbeks had found ways to adapt with the arbitrariness of the regime but still felt that they lived in a stagnating environment. A gastroenterologist I met over plov (a typical rice and vegetable dish fried in sunflower oil) asked me to teach him Portuguese so he could move to Angola, as he said many Uzbek doctors did in search of a better salary. A policeman asked to take us to dinner and said his dream was to travel out of the country. A woman asking for one dollar to enter an old building in Khiva asked my travel partner how much his plane ticket from Brazil to Uzbekistan cost and how much was his salary. “Capitalist!” she hooted in delight as he told her.

Ordinary passers-by called out to us on the street, “dollar, euro, ruble,” as government restricts citizens’ ability to convert their money to dollars, afraid of a run on dollars as Uzbeks hedge their bets against the inflationary local currency. While the official exchange rate was approximately 1,900 sums to the dollar, the black market rate was routinely 2,800. When we asked our first taxi driver in Uzbekistan to take us to an exchange house, he instead drove us to a lonely residential road where a smiling gold-toothed babushka was waiting for us, carrying a plastic bag with an astonishing amount of cash. She examined out hundred-dollar bill and approved. With a 500 sum note commonly in use and a nice dinner easily costing 80,000 sum, all Uzbeks seemed to have the ability to rapidly count bills like a bank teller.

What attracts travelers to Uzbekistan are the countless Silk Road-era mosques, medressas, caravanserai, and markets amongst Samarkand, Bukhara, and Khiva, whose pictures speak for themselves. A walk through the glorious Shah-i-Zinda avenue of blue-tiled mausoleums of Samarkand, where pilgrims come to quietly pray at what is said to be the tomb of Qusam ibn-Abbas, a cousin of the Prophet Muhammad credited with bringing Islam to the region, is enough to transport a traveler to the mystical bliss that one imagine when you hear the phrase, “Silk Road.”

But there’s another otherworldliness of Central Asia, a more contemporary one. It’s a region that has quietly fallen off the map for Western travelers, a shame in a time when outsiders conflate diverse countries across the Muslim world and are apt to see them only through the lens of the “War on Terror.”

When I returned to the US, I was curiously chosen for a random security screening and wondered aloud about it, given that everyone else in line at the moment was from a flight crew. “Been to any of the ‘stans?” a pilot behind me joked. “As a matter of fact,” I said, “yes.” 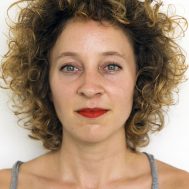 Taylor Barnes is a freelance journalist based in Rio de Janeiro, Brazil, and an investigative reporter with The Islamic Monthly.