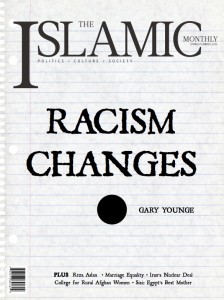 Since its inception until the next three to four decades, America has always been and will be a majority white country. There is an expiration date on this fact, and it is fast approaching. By 2043, America will be majority minority, which means the population of the country for the first time in its history will be less than 50% white. What does that mean for a nation built upon waves of successive immigrant populations, some white, some black and some other colors? Like tremors that precede an earthquake, the signs of what is to come are making themselves known.

The election of Barack Obama, the first U.S. president not to win a majority of the white vote, was perhaps the first most obvious indicator that when it comes to race in America, things are about to change in a big way. The reaction to his election (including the birther movement), the rise of the Tea Party, the seemingly unending incidents of racially charged violence and the perplexing rise (and perhaps by the time you read this, fall) of Donald Trump should leave no doubt that things are changing. This demographic shift will affect and will be affected by issues of race, racism, class, rising income inequality and questions around citizenship, immigration and civil liberties. It’s a whole lot of stuff to consider, but there is no doubt the dynamic across this set of issues is shaping and will shape what it means to be American over the next few decades.

Gary Younge — the noted British journalist, broadcaster and author — has tried to provide a flavor of this process drawing on history, contemporary events and the state of the Republican Party.

Recent incidents of police violence have left a charged atmosphere in the air, and Khaled Beydoun, Suad Abdul Khabeer and Mikki Kendall attempt to address it in their respective essay on the police, African Americans and America.

In this issue, TIM Editor-in-Chief Amina Chaudary also sits with notable author and commentator Reza Aslan to ask him about the America of today, discussing marriage equality, racism and America’s new process in the Iran nuclear deal.

We also include notable feature writer Salma Hasan Ali’s write-up on a woman who is attempting to fill a need by providing a shelter for battered women in Baltimore.

And we have three notable international feature stories on Muslims in Cambodia, an Egyptian single mother who dressed as a man for decades to provide for her daughter, and award-winning filmmaker Beth Murphy’s article on building a college for rural Afghan women.

America’s founding fathers explicitly stated that their efforts were towards achieving a more perfect union. Implicit in this statement is the assumption that America is in many ways imperfect. Despite all the structural aspects of this country’s political, social and economic establishment that prevent progress, America is still a place where remarkable things continue to happen. Understanding the hurdles that may prevent achievement is the only way to see more of them happen.

Brown, Black and Blue: The Colors of Police Violence
KHALED A. BEYDOUN

Obergefell, Marriage Equality and Islam in the West
MOHAMMAD FADEL

The Trouble with Our Criminal Justice System: The New Jim Crow and Muslim Americans
MARGARI HILL

One on One With Faisal Kutty
DAVIDE MASTRACCI

Interview: Reza Aslan on the America of Today
AMINA CHAUDARY

Alleged as a Threat: The Position of the Shia Population in the Middle East
ROQAYAH CHAMSEDDINE

The “Existential Threat” that is BDS
JAMAL DAJANI

The Contours of the Syrian Revolution
MAZEN HASHEM

The Struggle Against Terrorism
FARID SENZAI

The Story of Muslims in Cambodia
DAVID HUTT