Media in USA changing coverage because of social media? is it enough?

Is mainstream American media changing its coverage of the Palestinian-Israeli conflict as a result of social media and citizen reporting? 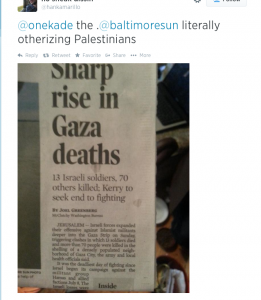 At the start of the Israeli attack on Gaza, an Arab NBC news correspondent Ayman Mohyeldin reported inside the Palestinian territory. His eye witness report about four children killed on the beach while playing soccer demonstrated the horrific plight of the Palestinians under attack. Immediately after it aired, NBC bosses told him to leave Gaza, replacing him with another correspondent. Massive social media backlash about his removal forced NBC to return Mohyeldin to Gaza four days later. Meanwhile, mainstream media outlets are slowly beginning to openly criticize Israeli policies towards the Palestinians. Is this the start of new era in how American media covers this conflict? Is Israel beginning to lose the information and propaganda wars in the USA?

VOTE in this BOX Below