MOSES and the SHEPHERD

RUMI HAS BEEN A BESTSELLING POET LN NORTH America, yet this hasn’t changed common misperceptions of Muslims. Many Englishspeaking readers see Muslims as a literalist, intolerant and self-righteous mass. Also, more disaffected young Muslims are attracted to interpretations of Islam confirming this stereotype. So when popular translations divorce Rumi’s poetry from his original Islamic context, readers can’t be expected to make the connection. Yet his teachings of humility, farsightedness and generosity are as popular among most Muslims as to outsiders. It was the Islamic tradition that gave Rumi his wisdom and enthusiasm for poetry. As his 8ooth birthday approaches in September, we offer as a timely reminder this annotated translation of “Moses and the Shepherd,” probably the most popular story in Rumi’s Masnavi among Muslims.

Moses condemns the prayer of a shepherd

Once Moses overheard a shepherd pray:

‘Where do you live that I might serve you there?

I’d mend your battered shoes and comb your hair,

And wash your clothes , and kill the lice and fleas,

And serve you milk to sip from when you please;

I’d kiss your little hand, and rub your feet,

And sweep your bedroom clean and keep it neat;

I’d sacrifice my herd of goats for you

This loud commotion proves my love is true.’

He carried on in this deluded way,

So Moses asked, ‘What’s that I hear you say?’

‘I speak to my Creator there on high,

The one who also made the earth and sky.’

You’ve given up the faith and gone astray.

You’d better learn to puta cork in it!

Your blasphemy pollutes the atmosphere

And tears to shreds that silk of faith so sheer.

While socks and shoes might be superb for you,

How can they fit the sun? Have you a clue?

If you don’t shut your mouth immediately,

A fire will burn up all humanity!

You don’t believe? Then please explain this smoke,

And why your soul turned black when you just spoke!

If you’re aware that He is God, our Lord,

Why act familiar when that is abhorred?

The Lord’s above such acts of piety.

For relatives reserve your generous deeds

God has no body, nor material needs:

Milk is for creatures who must drink and eat;

Shoes are for those who have a need for feet. ‘

Even when you address his chosen slave

When I was ill you never once stopped by:1

He wasn’t left alone with his disease,

That servant who through me both hears and sees.”2

Don’t talk to saints without the reverence due!

It blocks your heart, and blots your record too.

If you address a man by Fatima’s3 name,

Though man and woman are inside the same,

He’ll still seek vengeance for it if he can,

Even if he’s a calm and patient man

That glorious name which women all revere

Can wound a man more deeply than a spear.

While hands and feet are great for you and me,

He was not born, nor does the Lord beget,4

But reproducing beings are in his debt.

Those with a body were once born, and must

Remain until death in this realm of dust;

That is because we wither and decay;

Unlike our Maker we must fade away.

The shepherd said, ‘Your words have struck me dumb,

Regret now burns my soul, and I feel numb.’

He breathed a heavy sigh and ripped his cloak,

God rebukes Moses for what he said to the shepherd

A revelation came down instantly:

‘You have just turned a slave away from me!

Was not to lead to union whyyou came?

Is causing separation now your aim?

As far as possible don’t separate

Above all else divorce is what I hate.s

I’ve given each one his own special ways

And his unique expressions when he prays;

What he thinks virtuous you deem scandalous:

This person’s meat to you seems poisonous.

I stand immune to all impurity;

I don’t command for my own benefit,

But so my slaves themselves can gain from it.

For Indians their own dialect sounds best,

But folk from Sind think theirs the loveliest.

I’m not made any purer by their praise;

They gain in eloquence and godly ways.

And I pay no attention to their speech,

But their intentions and the heights they reach

I know when men’s hearts have humility,

Even if they should speak too haughtily. ‘

The heart’s the essence, words are mere effects:

The heart’s what matters, hot air He rejects.

I want a soul which burns so much it roars!

Burn thought and its expression with this fire!

How far apart the meek and well-behaved

From ardent lovers, who may seem depraved.

Each moment lovers burn themselves away;

A ruined village has no tithes to pay.

Don’t pick at faults and call him a disgrace,

Don’t wash the blood upon the martyr’s face!

It suits a martyr better that he bleeds,

And that’s worth more than countless pious deeds.

Men in the Ka’ba end the qibla6 rule

What use are boots when swimming in a pool?

You don’t seek guidance from those drunken men,

So why insist they mend their rags again?

God’s lovers stand beyond all faiths, as they

Are shown by God Himself a higher way.

A gem which lacks a seal remains a gem;

Though sorrows rain down, love’s not changed by them.

A revelation comes to Moses, excusing the shepherd

Then in the depths of Moses God concealed

Such secrets that can never be revealed;

Into his heart poured words, pure and refined,

He lost his wits and then found them anew,

From pre- to post-eternity he flew.

If I describe this it will be in vain

What lies beyond words how can I explain?

This mystery would smash your brain to bits;

When writing it the firmest stylus splits.

Once Moses had heard God’s reproach, he ran

Towards the desert, searching for that man;

He followed footprints that the shepherd laid,

Scattering dust throughout the track he’d made.

Footprints of drunkards are a special kind,

Distinct from those the sober leave behind:

He starts just like a rook, steps straight ahead,

And then as if a fish has slithered by;

On reaching the poor shepherd finally,

But let your heart express what’s in its core!

Your unbelief is faith, your faith God’s light;

The world, through you, is also safe and bright.

Absolved by God, Who does what He should will,7

Speak out, and don’t be scared I blame you still!’

He said, ‘I passed that stage right at the start;

I’m drenched in blood now from my love-torn heart!

A thousand spheres beyond, I still ascend.

You cracked the whip, which made my stallion vault

Above the heavens with a somersault!

May God stay close to human beings like me,

And may He bless your hand eternally!9

With words my current state can’t be expressed;

What I have said give just a hint at best.’

The image in the mirror which you see

Is yours and not the mirror’s obviously;

The breath inside the reed a man has blown

Is not the reed’s, but that reed-player’s own.

Whenever you should praise God, be aware

Though yours seems better and more accurate,

Still, for the Lord, they’re both inadequate;

So when the veil is lifted don’t protest:

‘What’s now revealed we never could have guessed.’ 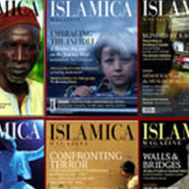