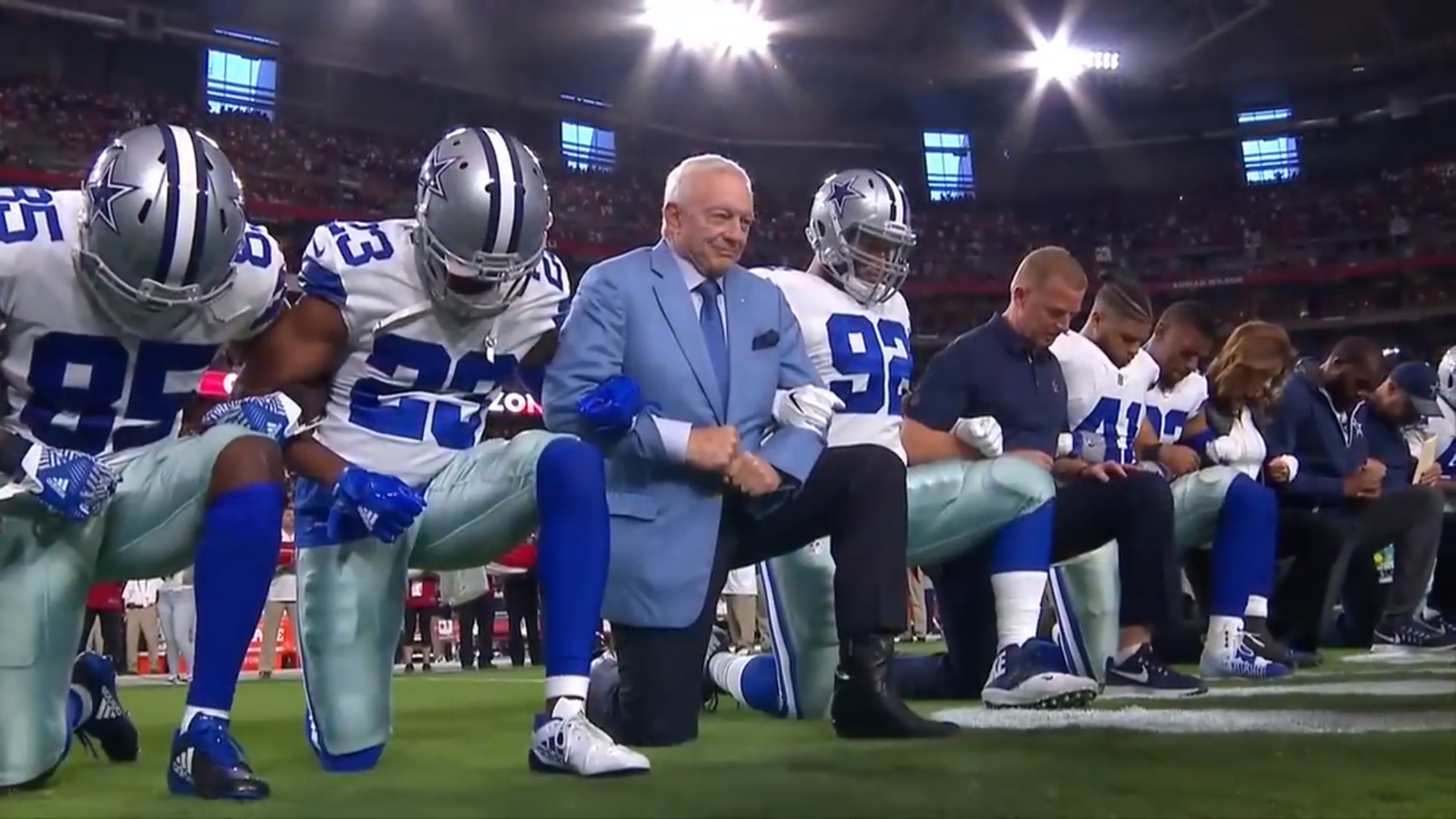 Take a Knee Sunday represented a major rejection of President Donald Trump’s attacks on players in the NFL. In a rally just days before, he railed against football players who decided to kneel rather than stand for the national anthem. Trump’s tactic is an attempt to tap into the forces of American Civil Religion and one of its dominant rituals, the singing of the national anthem.  Philosopher Alexis de Tocqueville aptly described this form of American religiosity in the 1800s when he wrote, “Americans so completely confuse Christianity and freedom in their minds that it is almost impossible to have them conceive of the one without the other.” The president is trying to harness the power of civil religion by portraying the kneeling players as a desecration of the ritual. Whether he will succeed seems doubtful.

Trump’s escalation of the tiff came with his “son of a bitch” comment, which sent shock waves across the media.  Reporting suggested that a critical mass of NFL players were planning to take a knee that coming Sunday to protest Trump’s insults. This, and more, happened.

More than 250 players knelt that day, and there were other demonstrations as well. For example, many teams locked arms in solidarity during the singing of the anthem. The owner of the Jacksonville Jaguars locked arms with his team, the owner of the Dallas Cowboys knelt with his, while the Pittsburgh Steelers, Seattle Seahawks and Tennessee Titans’ entire squads simply stayed in the locker room. In the Seattle vs. Tennessee match, even the singer of the National Anthem took a knee after her performance.

These surreal spectacles took place amid verbal attacks from the president against other Black athletes and sports personalities. Trump suggested that ESPN fire anchor Jemele Hill because of her comments calling him a White supremacist. He also rescinded an offer to Golden State Warriors star Stephen Curry to visit the White House, after Curry had already rejected the offer, which provoked Cleveland Cavaliers forward LeBron James to call Trump a “bum.” Thus, going into Take a Knee Sunday, the odds were already stacked against Trump.

A look at the anthem

The anthem’s lyrics are an ode to the country and God, demonstrating how civil religion binds the two. The song is a powerful relic of the country’s origin story and is an important part of the civil religious tradition. It is performed at sports and entertainment events, and all sorts of public gatherings and ceremonies.  But as Manifest Destiny and Providentialism would have it, the country’s birth cannot be separated from God’s will for a city on a hill. Hence, the full lyrics reveal that one cannot revere the country without honoring God either:

Praise the power that hath made and preserv’d us a nation!

Then conquer we must, when our cause it is just,

And the Star-Spangled Banner in triumph shall wave

As a side fact, the anthem’s author, Francis Scott Key, owned slaves and seemingly nods to their death at the hands of American troops in a different passage of the song: “No refuge could save the hireling and slave from the terror of flight, or the gloom of the grave.” This passage has been understood to refer to the killing of those slaves who abandoned the American side to fight for the British in the Revolutionary War. Hence, the raw racial animus of the lyrics is telling, particularly that the most sacred song of freedom even mentions the word “slave” at all.

On multiple levels, Trump’s rally around the anthem tugs at heart-strings for Black Americans, not to mention those who associate the anthem with military service and sacrifice. Trump’s frame of the issue is that players are disrespecting the country, rather than respecting themselves.

The turmoil has caused some commentators to suggest that sports and politics shouldn’t be mixed. However, this suggestion is ingenuous. First, the notion is impossible because sporting events are already heavily politicized. Military ceremonies, gun salutes and heavy military recruiting are a constant at these events. Sports are thus already politicized, and in turn, politics has always had to contend with Black athletes and their political influences, from Jack Johnson, the first Black heavyweight boxing champion, to Muhammad Ali, and now, the originator of the anthem protest, former San Francisco 49ers quarterback Colin Kaepernick.

This notion is particularly uncritical when considering that Black success in America has been largely limited to sports and entertainment. Without these platforms, Black people would have even less opportunity to express their political voice.  For example, aside from these platforms, the only political foundation for Black people has been religious, such as the church or mosque.  Former President Barack Obama, who came from none of these backgrounds, is the rarest of exceptions.

Thinking of Obama in this context is useful when considering the depth of White privilege in America. One need only imagine the political backlash if President Obama would have called anyone a “son of a bitch” during a public speech. Trump’s Whiteness and wealth allow him to say things that would have likely destroyed Obama had he uttered the same.

… trump taking a veiled shot at colin kaepernick, says owner should say: "get that sonofabitch off the field right now… he's fired!!" pic.twitter.com/ttbOd0VrPG

Perhaps the greatest difficulty with Trump’s use of the anthem to push his agenda is the potential conflict with other religious forms.  That is, kneeling often accompanies prayer in general, an obvious point that Trump should have recognized. Accordingly, in an interview, Baltimore Ravens star Ray Lewis said that when he knelt for the anthem, he was “praying,” not protesting. The anti-kneel campaign will seemingly be doomed if more players decided to pray during the anthem. After all, the idea is not new since Tim Tebow was already famous for his kneeling and praying during games. Moreover, it is not like standing for the anthem is an absolute since every Sunday, countless Americans are content to sit through the ceremony while watching TV at home.

Trump’s attempt to use civil religion is backfiring because it is bringing out what Americans hate most about religion: When followers tell you their way is the only way. In this instance, it is particularly distasteful coming from a draft-dodger who has too many videos of him bumbling around when the anthem is playing and it is hard to take him seriously. It may be time for us all to take a knee, for the sake of rising above this hatred, and before the First Amendment becomes a relic of the past.