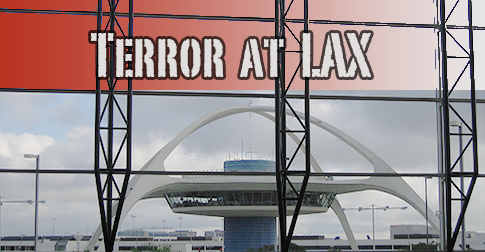 The LAX Airport Shooter is a Terrorist

Can you imagine for a moment that you woke up one morning to hear the news of one of our nation’s largest international airports essentially being held hostage by some brown gun-wielding anti-government madman with a name like Muhammad Ali (or Aziz Ansari) walking around with a high-powered rifle shooting and killing innocent people as they simply waited to board their flights inside the airport terminal? 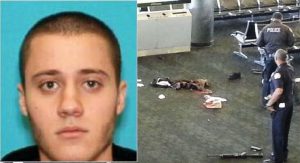 If that hypothetical scenario did ever occur, do you think that the vast majority of Americans would have any problem at all labeling the aforementioned situation an act of “terrorism”?

But in reality, it was a 23-year-old white man named Paul Anthony Ciancia who took his anti-government political ideology clearly into the realm of ‘terrorism’ when he inflicted mass violence aimed at instilling terror within the general public as thousands of innocent airline travelers at Los Angeles International Airport (LAX) feared for their lives one sunny Friday morning.

Media reports are stating that Mr. Ciancia grew up in New Jersey and reportedly has “strong anti-government views,” according to a report from NBC News reporter Pete Williams. This assessment was determined by the “anti-government materials” in his possession when he was captured. Furthermore, the Associated Press also reported that Mr. Ciancia, who was dressed in military-style fatigues during the terrorist attack, carried a handwritten note that said he “wanted to kill TSA [agents] and pigs [aka police].”

According to the Southern Poverty Law Center (SPLC), the language and references that Paul Anthony Ciancia used in his writings seemed to put him “squarely in the conspiracy-minded world of the antigovernment ‘Patriot’ movement” with references to the longstanding New World Order conspiracy theory. According to the SPLC, these so-called Patriots also “increasingly see the DHS, which produces intelligence assessments of extremists that are distributed to other law enforcement agencies, as an enemy and even a collaborator in the New World Order conspiracy.”

Now, the same right-wingers who would shout “terrorism” from the rooftops if the LAX airport shooter was a Muslim will likely avoid using the word “terrorism” at all since the shooter was a white Italian dude from Jersey. They will characterize this non-Muslim terrorist as a crazy kooky loner whose undiagnosed mental-health issues or work-related stress probably led to the attacks.

This would pretty much mean that the entire cast of Jersey Shore should now be under NSA surveillance.

So if we as a nation fail to adequately condemn all acts of terrorism equally- including the LAX airport attack by anti-government terrorist Paul Anthony Ciancia- the only clear message that we will be sending to the rest of the world is that the word “terrorist” in America only applies to brown dudes with foreign-sounding last names and does not apply to white men who commit those same acts of terrorism.