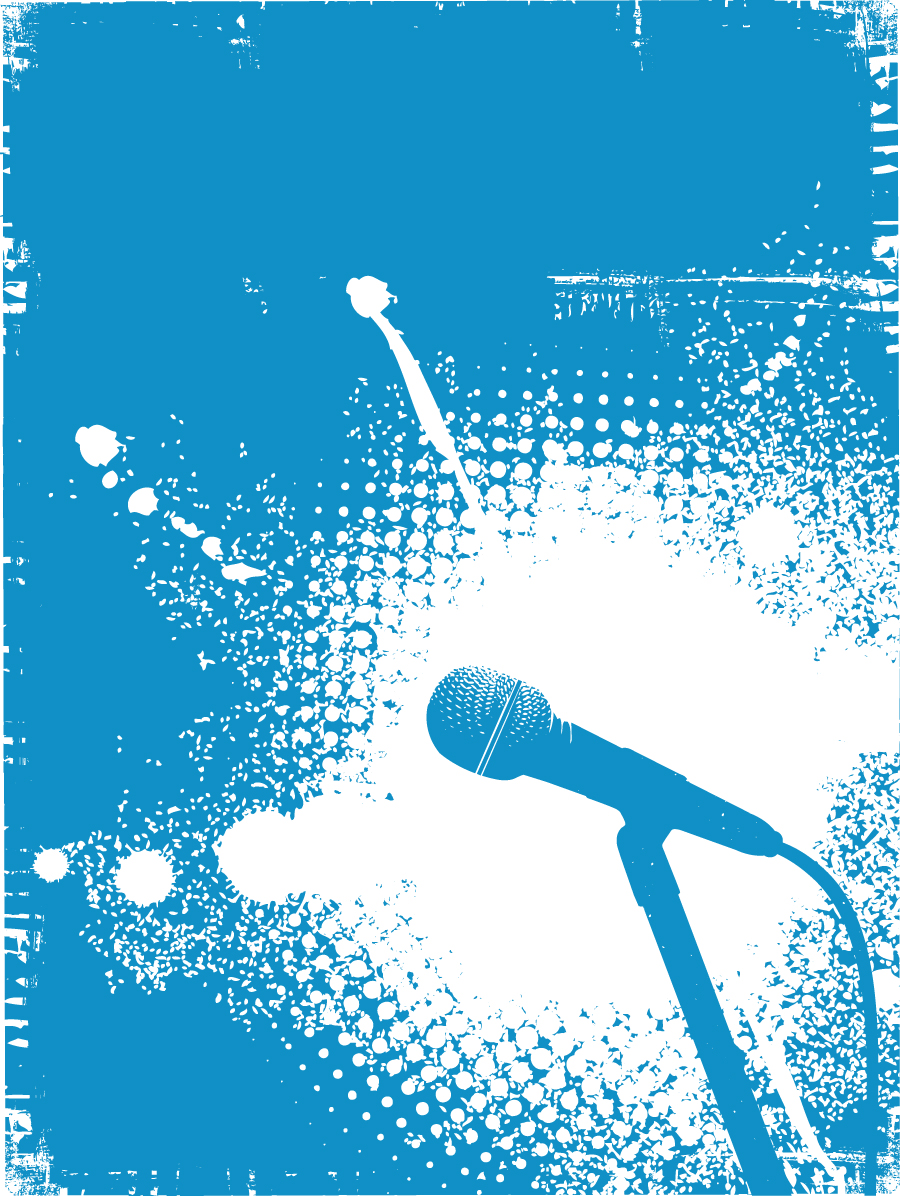 Picture this. An American Muslim event, such as a lecture, conference or maybe a well-planned fundraiser. The so-so lighting on the stage illuminates the night’s main event. He is African American, male and Muslim. The committee that planned this event chose him because he can move a crowd — to want be a little more “Muslim” or add more zeros to their checks. The crowd has heard of him before and they wait, with bated breath, to be moved. Many adore him, some idolize him, and all are unlike him in one very significant way: None of them are black. 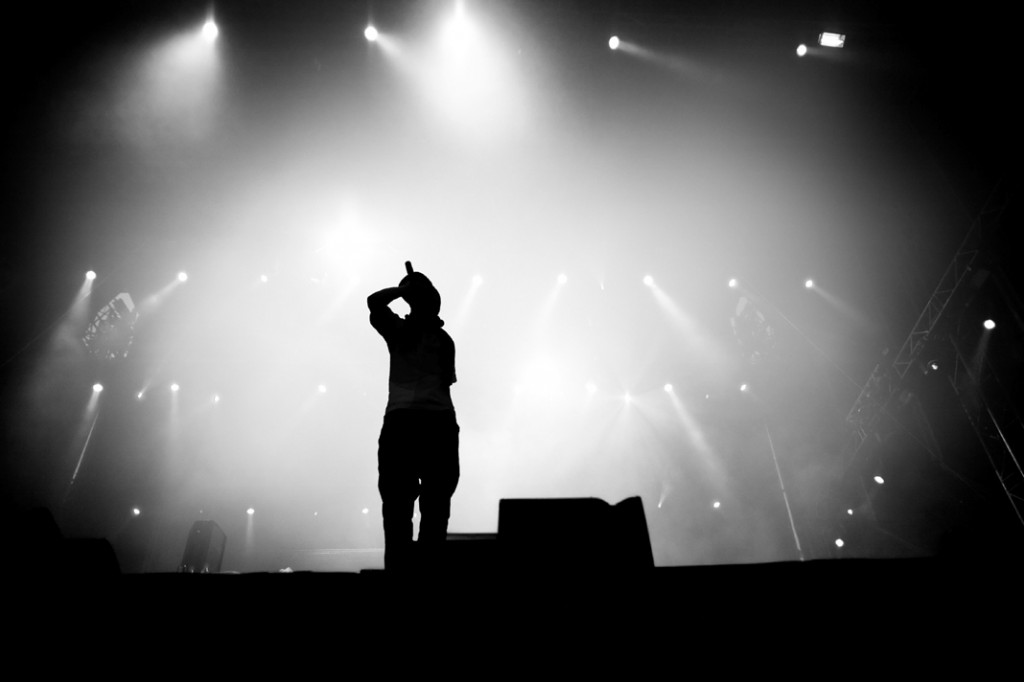 In my research on American Muslims, I have witnessed scenarios like this more times than I can count. Behind the scenes, I have heard concerns, particularly from hip hop artists, about policing. The Muslim hip hop artists, most of whom are African Americans, whom Muslim event committees usually invite often complain about an array of regulations that come along with these invitations. Songs are screened for appropriate content, and once they successfully pass these “content tests,” artists may be asked to perform acapella or over drum-only tracks. Likewise, artists’ bodies are regulated; both males and females are asked to conform to a politics of respectability that seeks to tame any unruly blackness.

Many Muslim communities in the U.S. are no longer interested in the “Is music halal?” question. Rather, musical debates tend to focus on a number of more nuanced inquiries: What kind of instruments are Muslims allowed to play? Can women sing and/or dance in front of mixed gender audiences? Does the music “enjoin the right and forbid the wrong?” This line of questioning is tied to differing ideas of what it means to be pious, but that is not all there is. Piety is not simply determined by what the texts — Quran and Sunnah — say but by how they are interpreted, and interpretation is always made through the lens of what is culturally normative. In the U.S., this relationship between piety and culture is racialized, namely it is shaped by our ideas of race and the values we give to racial groups. Thus these questions and the regulations they generate are also about race, more specifically, policing and black codes.

Policing in everyday life is a way to assert control and take power. Those who police do so to determine borders — who belongs and who is the outcast, what is authoritative and what is authentic. And like the “boys in blue,” policing in everyday life is also about enforcing codes. Code can be defined as laws, prescriptions and regulations, which come to life through those who are charged with policing. When it comes to American Muslims and music, what kinds of codes are being enforced? Black codes that want to determine and delimit the acceptable boundaries of blackness. Black codes have a long history in the U.S., from laws during slavery to post-emancipation Jim and Jane Crow to the more subtle but no less dangerous codes of today that police and regulate black life. I hold that this legacy inheres in the way black music is policed by American Muslims.

It is critical to underscore that policing blackness among American Muslims takes place within an environment in which Muslims, black and non-black, have deep anxieties about the power of mainstream American popular culture to whittle away at Muslim identity, particularly the identities of Muslim youth. This fear is neither completely unfounded nor necessarily particular to American Muslims. Scholars, organic and academic, have long ago dispelled the myth that what we see on our televisions, computers and movie screens is a mere mirror of “real life.” Rather, popular culture is part of the stuff “real life” is made of because the stories that continuously circulate through mass media play a role in shaping our perspectives on reality. Through reproduction and repetition, narrow sets of characters and storyline stereotypes can be raised from myth to common sense, and then guide choices — whom to save and whom to shoot — offscreen. American Muslims know this process intimately; when images become “reality,” a whole host of discriminatory acts become legitimate, whether at the hands of everyday citizens, corporations or the government. Critically, the same is true within American Muslim communities. Music in particular — and popular culture more generally — is a site of struggles over the power to define and proscribe authentic American Muslim identity. And through the reproduction and repetition of specific roles for specific people, image shapes reality.

A poignant and somewhat painful scene from the 2010 documentary Deen Tight illustrates this. Acclaimed spoken-word artist Amir Sulaiman describes past experiences performing at Muslim-run entertainment events, calling it a “fight” between artists and committees over “what is permissible.” He identifies the restrictions on musical instruments but explains that policing extends to even the way “an emcee moves. … Like that in itself, is almost like, impermissible. What makes you black and American is haram.” Here, Sulaiman describes what policing looks like and the implications of the enforcement of black codes. His experience is not unique, but is quite common. It makes one wonder, if committees are always finding ways to regulate blackness, why invite hip-hop artists in the first place?

The work of Caribbean anti-colonial theorist Frantz Fanon may shed some light. Writing in the 1950s, Fanon recounts a story in which a white child riding on a train sees Fanon and exclaims in fear to his mother, “Look! A Negro!” Fanon explains that the child’s statement and fear reflected well-known stereotypes about black people: “The Negro is an animal, the Negro is bad, the Negro is mean, the Negro is ugly.” Fanon describes these stereotypes as “facts” woven by “the white man … out of a thousand details, anecdotes, stories.” Hence, one of the critical points Fanon makes about these “facts of blackness” is that they are not simply misunderstandings or exaggerations about black people, but are stories specifically designed by those in power to maintain a racial status quo. These stories multiply, permutate, circulate and repeat such that they become “facts” or common sense. These common sense ideas then become signs that need no explaining — Look! A black woman with children! (She must have multiple baby daddies.) Look! A black man in the masjid! (He must be a convert, maybe out of prison, but he must be able to sing.) 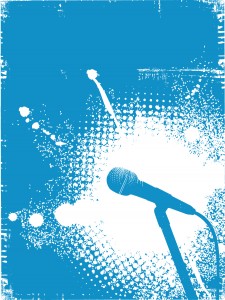 Facts of blackness include stereotypes of black people as hypersexual and prone to violence, yet the facts also have their more “positive” renditions. Black folks are seen to embody cool and resistance. These two attributes motivate invitations to perform, and it is in the performances of black men as artists and imams that blackness is most broadly sanctioned in much of the American-Muslim community’s public spaces. More specifically, spaces in which African Americans are a minority or largely absent, such as the scene I asked you to picture above, the following pattern replays itself: black male Muslim bodies on stages in front of non-black Muslim audiences. An African-American imam might be asked to fundraise for building an institution in a predominately Arab or South Asian American Muslim community or a humanitarian crisis in the Middle East and South Asia. There are also occasions in our never-ending post-9/11 moment, in which black Muslim male leaders are also requested for media spots because they come off as “American.” Black male Muslim artists are also deployed for the same purposes and as a way to lure the youth to places they typically would avoid.

Being cool and having an attitude of resistance in the face of oppression are indeed qualities valued within black American culture. Preaching is, in fact, an art, relying on the same mastery of lyric, rhetoric, sound and improvisation demanded of the emcee. Likewise within a community that continues to suffer from racial oppression, both preachers and emcees are often met with the expectation that they will speak truth to power. Yet among American Muslims, these two characteristics, cool and resistance, are essentialized: They become all that blackness is and the common-sense default assumptions about what blackness is for and what it is not for. Thus, American Muslims are reproducing certain “facts of blackness”: The American Muslim Negro is not ugly or mean, but he is BADDD. He has enough swag and anger to make rousing speeches and songs, yet his leadership is rarely relevant offstage. This is what makes black male performance different from non-black imams and artists who are also asked to perform (and thus conjure a different symbolic power). Being on stage is not the only time that non-black men are elevated in these communities. In contrast, the stage is the only place where most black Muslim men wield any semblance of authority within non-black Muslim communities in the U.S., which has clear implications for the community as a whole.

By way of policing and the enforcement of black codes, blackness as a whole — histories, experiences, cultural production — and black Muslims as whole, complex and complicated subjects is “impermissible.” What is “permissible” then are only a few one-dimensional “facts of blackness” forged into a tool that is used and discarded when no longer necessary. When black cultural forms are only deemed valuable when aiding another community’s development, that community is engaged in the devaluation of black life. For American Muslims, this looks like practices of policing that result in deformed expressive cultures and rampant interethnic and intra-Muslim alienation. It looks like everything from Facebook status updates to press releases and films that herald Malcolm X and the enslaved African Muslim in America from a community that, on the whole, remains on the fringes of struggles against systemic inequality in the U.S. Yet like anxieties about popular culture, devaluing black life is not particular to Muslims but emblematic of the nation. Americans elect a black president twice, then kill young black people and let their murderers free. Americans blame hip-hop for almost everything, then use hip-hop to sell everything from a Kia to that president they voted in. So maybe we are American after all. Indeed, what could be more American than reproducing the nation’s racial status quo to devalue black life?

American Muslims need not define their American belonging by the yardstick of white supremacy. Non-black American Muslims could invite the Amir Sulaimans of the world without policing the blackness out of them. They could invite black Muslim men into their communities to do more than rap and fundraise. They could eschew post-racial Muslim platitudes for the difficult, grassroots and everyday work of facing racism head on, work that might just start with the brother or sister next to them in the prayer line. They could work to dispel the facts of blackness rather than benefit from them.

Picture this. An American-Muslim event, such as a lecture, conference or maybe a well-planned fundraiser. The so-so lighting on the stage illuminates the night’s main event — a short film on poverty in the United States. The committee that planned this event was a group of young folks that built a partnership between a predominately Bangladeshi American masjid and an African American masjid on different sides of the city to get just the right mix of audience, a diverse cross section of their local communities, with the hope that there will be a few in the room that night who will be moved — to join their work on living wage, and affordable housing. 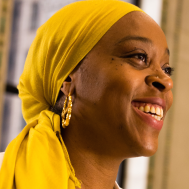