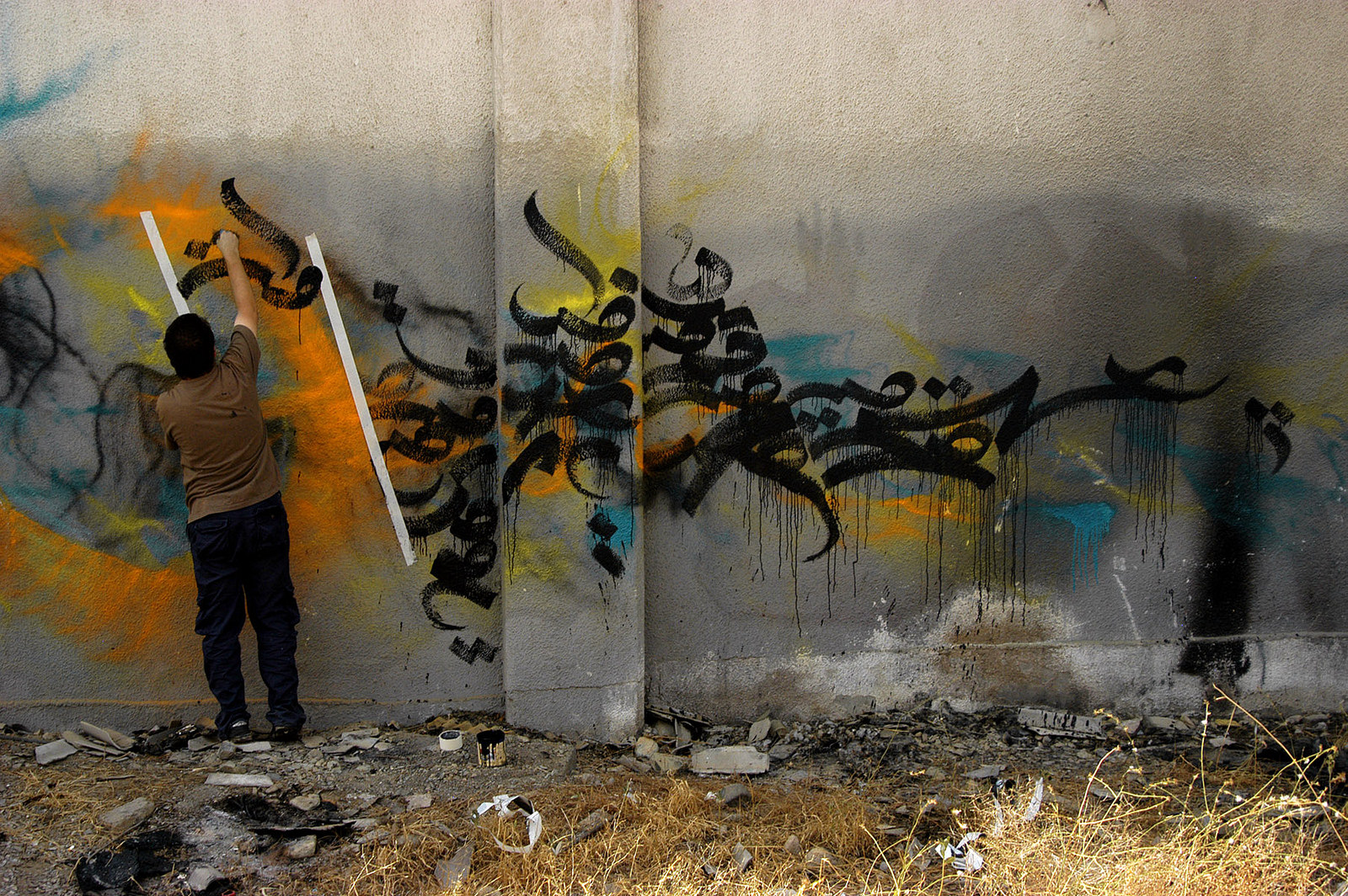 Arabic as an accessory

Beyond the “Homeland” graffiti incident

In April, Lindsay Lohan broke the Internet when she Instagrammed an image of a romantic floral print with Arabic text sprawled across it. The text stated, “you’re an ass” in the Arabic language, but was intentionally mistranslated to “you’re beautiful” in the English caption. She deleted it, thanks to kindhearted fans who left comments about her blunder, but shortly after, Buzzfeed published an article, humiliating tweets ensued and Lohan went on to say it was an inside joke with an unnamed friend. Whether this friend exists or not, we can’t be too sure. But one thing we do know is that this wasn’t the first or last time non-Arabic speakers made an ass of themselves by way of the Arabic language. 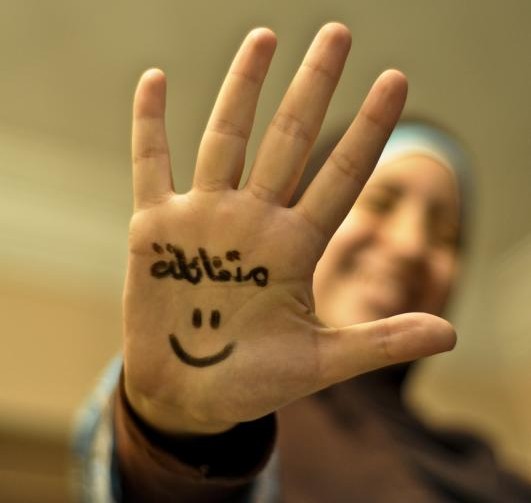 Arabic, as a spoken language and written text, is something the Western gaze is enamored by, but also terrified of. A quick Google search renders a flood of results about the popularity of Arabic in the non-Arab world. From warnings of things to keep in mind so you don’t end up with a failed Arabic tattoo to white mothers seeking out trendy Arabic baby names, there are numerous examples of how Arabic is made palatable to the white gaze. At the same time, you will find horror stories of students detained for carrying flashcards and study materials in Arabic on a plane, or of a Brooklyn father stabbed by two teenagers who overheard him speaking in Arabic while walking home with his wife and 8-year-old son. The West has a desire to decorate its image with Arabic, but has no intention on guaranteeing the safety of actual Arabic speakers in a violently Islamophobic society. Popular Hollywood films such as The Mummy, Ironman, and even Aladdin utilize random and sometimes nonsensical Arabic phrases to add just a touch of Middle Eastern authenticity without coming off as too terrorist-y. Like when you find falafel listed alongside salads and wraps on the menu of a gentrified vegan-friendly eatery. It’s cool to throw it in there for the cultural appeal, but you have no other context of its production.

The Arabic language functions as an accessory in a sphere that is largely Islamophobic when it comes to all other representations of Islamic culture. Early in October, we learned of Syrian artists who were asked to decorate the set of Showtime’s hit television series Homeland with Arabic graffiti to add “authenticity” to the sets. In an interview with AJ+, Don Karl, the artist assigned to this project, said the directions were vague and the set directors simply wanted “to have Arabic letters on the walls” but did not care what it read. The situation became an online sensation when the artists decided to brandish the set with politically charged graffiti that read, “Homeland is racist,” and “#blacklivesmatter.” Graffiti has played a strong role in the Arab uprisings and continues to have a hold in countries undergoing social and political turmoil, yet this context was divorced from the show’s desire to simply add the flair that Arabic art brings to a set. Ignorant to the weight of this artistic expression, the set directors of Homeland wanted to add the aesthetic appeal of graffiti artivism without any context as to how graffiti in the Arab world has a tendency to be anti-imperialistic, and essentially points a giant middle finger to Western intervention in the region. The art feeds the desire to have that authentic touch, but is also emblematic of the fear of the Islamic terrorist threat that is constantly reified by shows like Homeland.

Frantz Fanon, a prominent political theorist and psychologist, speaks a great deal about how fears can also manifest as desires, where the very thing we’re afraid of is the exact thing we fantasize about. Within studies of colonialism, we learn how the West is threatened by, but also lusts after the Oriental subject. Niqabi women are seen as a terrorist threat, yet also an object of sexual desire the West wishes to unveil. Following that nuance, Western fascination with the Arabic language cannot be divorced from undercurrents of the Orientalist tropes that the text itself symbolizes. 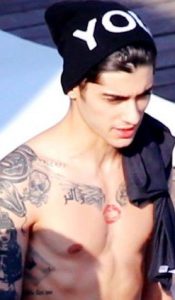 Arabic is frightening when it symbolizes a faith, a people or a nation. But Arabic is exciting when it is emblazoned across a shirt at Urban Outfitters. Arabic is a threat when turban-clad men shout it randomly in films like American Sniper. But it’s trending when Zayn Malik gets it tattooed on his chest. Arabic is hip when it’s heard on a Drake track, but not when it’s spoken by the man next to you on an airplane.

Hani Tajsar, an ethnically Iraqi student in Los Angeles, laughs as he reminisces about a high-school friend who got a tattoo on his chest that he thought meant “strength” but was actually the colloquial term for “pregnant.”

“It’s severely disrespectful when people fetishize, glamorize and then turn around and incarcerate and terrorize Arabs and Arabic,” Tajsar says. “Taking someone’s culture and commodifying it in our unjust capitalist economic system so that people can feel cultured, liberal and cool is so disrespectful. On the one hand you punch them, kick them, imprison them, bomb them, and on the other hand, you wear their religious texts and sing their songs.”

Tajsar puts into words the binary of the consumption of Arabic as an exotic accessory, or the inclination to learn the language solely to perpetuate the violence of U.S. foreign military policy. The cultural prevalence of Arabic symbolizes either end of the extreme, and neither approach is doing anything good for actual Arabic-speaking folk.

This has harmful overarching effects on the psyches of Arabs and Muslims living in the United States, who learn the art of code-switching at a very young age. Because Arabs and Muslims are constantly demonized for their link to terrorism, many parents tell their children not to speak Arabic too loudly in public spaces. Arabic-speaking children then start seeing the language of their ancestors as a hindrance to their assimilation in this country. Muslims come to see their language as a marker of foreign threat rather than the language of the Quran.

“Although my parents are very nationalistic and prideful of their Egyptian origins, I remember being on airplanes and automatically switching to English,” notes Marwa Aboubakr, who was born and raised in Orange County, California. “The crazy thing is that they never told me and my siblings to do so, it was just an automatic reaction to the hostile environment of airport security and anxious passengers.”

Aboubakr’s example of code-switching symbolizes Arabic-speakers’ quiet internalization of the idea that because people perceive the language as a threat, speaking it can lead to an actual threat to the Arabic speaker’s safety.

“Switching languages is not a subtle thing because my family speaks Arabic together and it’s our primary mode of communication,” Aboubakr says. “But, I mean, these are the sacrifices we have to make for our safety.” To understand this idea at an extremely young age shows how deep these ramifications can permeate, and how they taint the way an Arab child is socialized.

Subhiya Kassami, a Palestinian who moved to Irvine, California, from Nazareth eight years ago, shares a similar experience.

“Because my parents experience various forms of violence due to speaking Arabic and being Arab both in occupied Palestine and in the States, they usually automatically switch to English when we are in public settings, in airports or when we are at my Dad’s store. It isn’t something they would necessarily tell us to do, but it was always implied as a safety measure,” Kassami says.

“In occupied Palestine, speaking Arabic would lead to unwanted, and violent, attention, military searches, interrogations by police and so on. In the States, it means no customers at my dad’s store, being followed or stared at by white people, being cornered by white males and interrogated for our affiliations with terrorist groups.”

Kassami’s experience with being terrorized for speaking Arabic shows how deep the Orientalist fear of the Middle East runs. In light of foreign intervention in Arab-majority regions in the Middle East, and the violence of Zionist policies on indigenous Arabic-speaking populations, the vilification of Arabic is a steady trend that is gaining momentum with every mention of Arabs in the media. 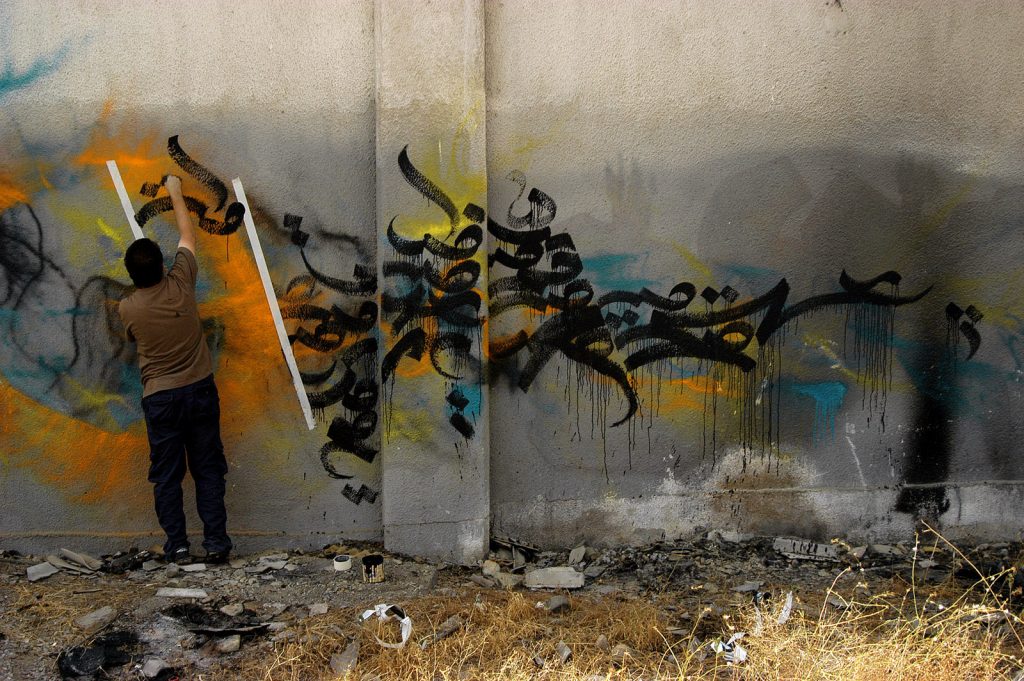 The Arabic language in the West is simply a means to an end. It has a duty to perform a certain way by fitting into whatever mold the dominant narrative demands. When it is supposed to perform as art, it is nonsensically spray-painted across a television show set. When it is supposed to be a justification of violence, it is reasonable grounds for suspicious behavior per TSA guidelines. When it’s supposed to train for Western intervention, it’s taught across college campuses out of textbooks in which you learn to talk about the United Nations in the first chapter, but not really about colors, seasons or conversational expressions. Arabic functions in the way the Western gaze dictates it to.

“Are we only good for our squiggly text? Are we only good for your shitty tattoos and art? Is our culture not good for anything else?” Tajsar muses. “How else should I feel when it’s apparent the only thing you think me and my people are good for is your consumption, because every other aspect of my culture, of my people, is backwards, primitive, and in need of some serious white saving?” 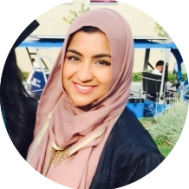 Naaila Mohammed is an aspiring digital media journalist and storyteller.