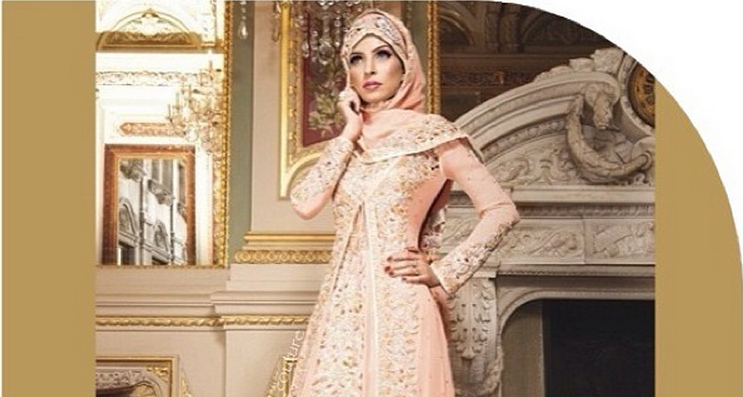 Deconstructing the Hijabi Bride: Even Islam in America is Hegemonic

A few days ago, I was scrolling through my Instagram account when a picture caught me off-guard. Amid a random stream of posts from friends, fashion designers, and celebrities, I happened upon a picture of a Pakistani Hijabi Bride, posted by a popular South Asian fashion account, desi_couture. To the typical observer, the pictured bride is the epitome of Pakistani fashion’s latest bridal couture: her makeup is flawless, her dress is a traditional peach color, it’s covered with hundreds of sequences upon beautiful embroidery, and it even features the newly popular “coat” style of evening wear. 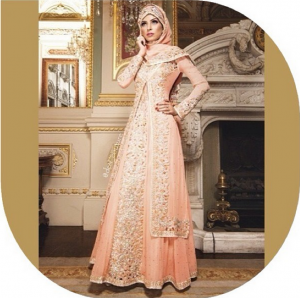 To a keen observer, however, something stands out about this bride: she’s wearing a headscarf. Or maybe it’s her dupatta fashioned as a headscarf or maybe it’s a headscarf fashioned to look like a dupatta. Regardless, one thing is clear: her head covering isn’t styled in the traditional South Asian way – it isn’t see-through and neither her hair nor her neck is visible, both of which are typically adorned with jewelry.

When I first started getting serious about Islam, around three years ago, I realized that I would have to give up a lot of my Pakistani culture. Mostly, I was relieved. After all, it was my parents’ Pakistani culture and its unyielding grasp on their understanding of religion that pushed me away from Islam in the first place. But my newfound desire to separate Islam from Pakistani culture also meant giving up a few of the cultural traditions I actually looked forward to. I gave up, once and for all, on the idea of having an extravagant wedding, as excess and useless spending is looked down upon in Islam.

For years now, I’ve been thinking about how I’ll fashion my hijab on my wedding day – I’ve rarely seen a Pakistani bride wear a headscarf the way I do (neck and hair fully covered). The traditional Pakistani dupattas-as-head coverings just won’t do. Time and time again, I hear lectures given by popular American Muslim scholars warning against the “innovations” of South Asian culture and the wastefulness of South Asian weddings. A common question at these lectures is whether or not a bride can show her hair at her wedding, as is South Asian custom. “No, you can’t show your hair on your wedding day. That isn’t hijab,” is the typical response.

So when I happened upon that picture of a Pakistani hijabi bride on desi_couture’s Instagram account, I was duly excited. I finally found a wedding outfit that met my standards of hijab that also looked sufficiently Pakistani. But I was even more excited that the outfit was a tangible example of transnational dialogues occurring between Muslim communities throughout the world.  And better yet, I thought, the picture of the hijabi bride symbolizes an amazing counternarrative to the stories I typically hear about Muslim countries adopting secular, “Western” practices. If anything, this was an example of how historically Muslim cultures were being influenced Islamically by Muslims in the diaspora.

Curious to know whether or not the South Asian Hijabi Bride was actually a tradition begun in the diaspora, I decided to ask my grandma and mom about their experiences with bridal fashion.

“Dadi,” I asked, “Did you wear a hijab when you got married?”

“A hijab?” She was surprised. “No, no one cared what we wore back then.”

Next, I turned to ask my mother, who grew up in a small village outside of Peshawar, Pakistan. I had seen pictures of my mother on her wedding day and knew that she hadn’t worn a fully covered headscarf, so I already knew her answer to the question I had asked my grandmother.

Instead, I asked, “Mom, did any brides wear a hijab back when you were getting married?”

“No, not really, we just wore our dupattas.”

I replied, “Well you know that’s not really hijab.”

“Well, it’s not like I was around men when I was getting married. All of the functions were separate, so it didn’t matter if I was wearing a hijab or not.”

But you were still photographed, I thought to myself, and everyone can see your hair in pictures and that’s not hijab.

When I first encountered the picture of the hijabi bride, I saw the melding of Pakistani tradition and the reexamined ideals of Muslims in diaspora as an amazing correspondence occurring outside of the mainstream between Muslim communities throughout the world.

And then I thought about how I had acted in that conversation. I came into the conversation convinced that my mom—and by extension, all of South Asia – had Islam wrong. I assumed that her understanding was weak and at best, misguided. I acted much like the many people I’ve defended my choices (and myself) against daily.

Put simply, cultural hegemony occurs when groups in power believe that their own beliefs are correct and therefore are to be universalized, at the expense of disadvantaged cultures and peoples.

In many ways, I think it is. At the very least, there’s a silly air of superiority emerging in American Islam. American Muslims are being taught, and are beginning to believe, that the Islam of several Muslim cultures is tainted and therefore inferior.

Back in December, Haroon Moghul, Senior Editor at The Islamic Monthly, tweeted:

I don’t know many Muslim Americans who would explicitly say that “American Islam is Islam’s last, best hope,” but I know many who sure do act like it.

There’s a certain level of vindictiveness in the Millennial Generation’s American Islam. Many young American Muslims (including myself, at times) want to rub it in, just a little bit, to the older, immigrant generations that yes, we can be American and Muslim – and not only that, but also, our Islam is better and more pure than theirs.

In a sense, this vindictiveness is warranted. We’re a generation who grew up trying to synthesize a multitude of identities, several of which we were told were inherently incompatible. We were Pakistani/Indian/Bangladeshi/Arab/Persian/etc., American, and Muslim. Growing up as the “Others,” we faced the well-known narrative of American non-acceptance, but we also faced a similar non-acceptance from our immigrant communities; we weren’t ________ enough, so we weren’t Muslim enough either – to our communities, the two identities went hand-in-hand. Many of us fought this double-edged non-acceptance by reclaiming Islam, and divorced our Islam from the Islam of our immigrant cultures in the process.

In response to the entanglement of immigrant cultures and Islam, American (and more generally, Western) Muslims have formed a new, back-to-the-roots movement of Islam (the roots being the Qur’an and the Seerah or the story of the Prophet’s life). In many ways, the movement is necessary. Muslims living in historically non-Muslim countries, especially the children of immigrant parents, need to figure out, and are figuring out, how to be Muslim in the West.

Unfortunately, however, the back-to-the-roots approach to Islam is also bringing with it the idea that this Islam is the “right” Islam, especially when contrasted to the Islam of first-generation immigrant communities. It’s in this attitude of righteousness that American Muslims run the risk of cultural hegemony – advertently or inadvertently, American Islam is forcing other Muslim cultures to defend the legitimacy and fight the erosion of their religious traditions.

At moments, even American Muslim scholars like the ones I mentioned earlier have an absurdly American arrogance to them. When Muslim women ask about showing their hair on their wedding days, these scholars respond with a definitive answer: “No, as American Muslims we have to leave all those explicitly cultural traditions overseas.” The incorrect assumption on behalf of these scholars is that showing your hair on your wedding day is absolutely wrong. However, there is nothing wrong with a woman showing her hair in front of other women. A more nuanced and well-studied answer may look something like this: “Sure, you can show your hair on your wedding day, but make sure that no non-mahram will be able to see you without hijab.”

The emerging cultural hegemony of American Islam goes beyond clothing.

In high school, my neighbor’s mother began resenting her daughters’ attendance of religious lectures at local mosques. At first, she was ecstatic that her “Americanized” teens were starting to get serious about religion. But after a few of these lectures, she noted that all that was happening was that her daughters would come home and rant to her about how most of her practices are sacrilegious. “What’s the point of sending your children to the mosque if they come back without respect for their elders?”

Entire debates occur over whether pronouncing certain words with a Pakistani accent is “Islamic enough.” Should “Ramzan” be pronounced “Ramadan,” because after all, “the word really is Radaman.” Shouldn’t we say “Allah Haafiz” instead of “Khuda Haafiz”? We need to stop saying “Slaw-lay-kum.” How about “azaan”? Isn’t it really pronounced “adhan”?

At its root, the problem with the emerging cultural hegemony of American Islam is the belief that American Islam has the chance to be or, worse, is, a fresh approach to Islam. It’s impossible to separate American Islam from the American culture American Muslims were raised with.

More generally, this conversation on the intersectionality and many layers of systems of oppression needs to occur in other social justice movements as well. Perhaps the two most striking examples of how one liberation movement can silence another take place in the Feminist Movement and the Civil Rights Movement. In the Feminist Movement, the voices of white women became the voices of all women and in the process silenced the voices of women of color. And with the Black Power Movement, the masculine voice became the voice, silencing and ignoring the voices, concerns and issues of black women. White women forget that they’re at the top of a racial hierarchy; black men forget that they live in a patriarchical world; and American Muslims forget that they’re part of a larger American cultural hegemony.

Alhamdulillah, this article has gotten a lot of traffic in the last few days! I urge my readers to take a look at the comments, as many are well thought out and point out several key issues with the article.

As many have noted, I failed to give justice to the diversity and depth of the American Muslim Community by 1) Centering my piece around the experiences of second-generation South Asian American Muslims while 2) excluding the narratives and experiences of non-South Asian American Muslims and their communities. Others have pointed out that many of the issues I raise in my article can be explained by the rise of the Salafi Movement and the impact it has had in the United States and globally.  Anyways, the commenters do a much better job of explaining, so please take a look.

I hope my readers note these critiques and continue the conversation. 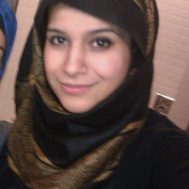