Syrian Refugee Camps: Too Many Children Left Behind

As the international community awaits results of an investigation by the United Nations on whether or not the president of Syria and his army used chemical gas against his own people earlier last week, there is an aspect of this two-year conflict in the country that has recently been brought to the fore: that of child refugees.

On August 23rd, the UN High Commissioner on Refugees registered its 1 millionth child refugee from Syria. That’s more than half of all the refugees on the books. Perhaps this tragic milestone is an indication that the situation on the ground in Syria is going from bad to worse. With a majority of refugees being youth, many wonder what the future of this country and its people will be as the drums of war grow louder from the West . 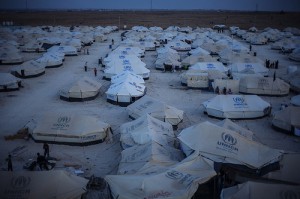 Most recently, the world has been bombarded by disturbing images of children lined up lifeless on the ground, mouths gaped open, and hands tied about their bodies. These latest victims were the result of an alleged chemical bombing.  This, the result of Syrians protesting and fighting for their rights and freedoms for over two years as part of what has come to be known as the Arab Spring. Syrian President, Bashar Al Assad opted to use force to disperse the protests, resulting in a prolonged civil war that has taken the lives of more than 100,000 people. Syrians have been forced to flee the country to find safe haven elsewhere. There are nearly two million refugees in neighboring countries. In Jordan alone, more than half a million refugees live in four camps. On September 1, the country will open an additional camp to accommodate the influx.

The stories of these refugees offer a grim look into the conflict that continues to rage inside Syria, many were forced out of their homes at gunpoint or fled the country out of fear that they may be the next victims of an attack. In an UNHCR interview with children posted online, many of them explain how they have fled their homeland. “We escaped by car. When we were in the car we had to bend over so no one could see us and then we crossed the border,” said one young boy from a refugee camp in Lebanon.

The refugees, particularly the children, saw things that many of us could never possibly imagine; family members being killed, houses destroyed and hopelessness in the eyes of their parents that no child should ever see. In some case refugees have had to put up tents made out of garbage bags and take menial jobs just to cover their basic needs and the numbers of these refugees are continuing to rise.

To better understand what life is like in the refugee camps, I interviewed, by email, the camp directors from the Syrian Revolution Coordinators Union (SRCU) about the conditions of the camps in Lebanon and Turkey. They asked to remain anonymous to protect themselves and their families, who still remain within the borders of Syria, from retaliation.

In Lebanon, small makeshift tent cities have lined the border between Lebanon and Syria to house those fleeing the war. But these camps cannot accommodate all the new arrivals. Representatives from the SRCU describe a desperate image when asked about the refugee camps in Lebanon. One member of the Union, who currently lives in the camp, said “tents are made mostly out of plastic bags and bits of wood and each family is responsible for their own tent. The floors are sand and as the weather gets bitterly cold in the winter, they turn into mud.” The challenge of dealing with health and hygiene within the camp falls upon the shoulders of each individual refugee, there are no bathrooms and drinking water is scarce. 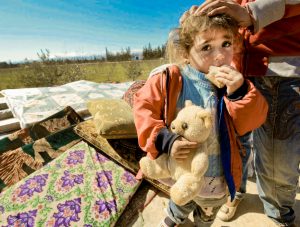 In response to the poor living conditions within the camp, many refugees leave with the hope that they may find a better place to stay for their families. With the lack of running water and electricity to support their needs in the camps, many refugees, mainly children under the age of 18, take menial jobs within the surrounding cities for as little as $5 a day. Their wage helps to cover their rents for the small rooms their families may be renting. But other refugee families are not so lucky. There are parts of Beirut where one can find displaced Syrians camped out in the streets and sleeping in alleys at night.

It is often said that those most affected by war are children and this is clearly true about Syrian refugee children. With no mental health professionals on site to deal with the trauma that they have suffered, many of the kids suffer from nightmares and aggressive behavior.

“The psychology of the children is completely different than any child who lives in a safe and secure environment. The mental state of the children that are forced to take jobs is affected because they are very tired and have been deprived of their most basic rights, a safe environment and an education,” said an SRCU representive. Children’s faces that were once full of life and light now appear dark and grim, when one young boy was asked by a UNHCR representative visiting the camp what he wanted to be when he grew up, he responded that he wanted to  “big enough to beat someone up if they try to beat me up.”

The numbers of refugees at the camp escalate drastically when larger areas near Damascus, Homs and Aleppo are targeted in attacks by the regime.

The Atma camp is located on the border between Syria and Turkey, an area now overflowing with Syrian refugees, who have fled the possibility of death only to be faced with the near impossibility of finding shelter within the campgrounds.

According to the representative on hand from the SRCU, “Refugees use trees and cloths to shield themselves from the heat of the summer and the winter rain. There are some workers inside the camp but they are being pushed above their abilities trying to secure tents and the limited and conditional aid they receive from relief organizations. As with the other camps, there is no drainage system and when it rains, sewage and mud are mixed together threatening the health of the inhabitants. Of those who choose to leave, a small number make their way back to their liberated villages in Syria but the majority go to other camps.

According to the SRCU, the morale of the children in this camp is high. “The kids are happy and want to go home quickly to build their country again. They want to be doctors and engineers and teachers to help their homeland and make it a better place,” said the director here. But for now, their dreams will have to be put on hold, considering that their education needs are not being met in the camp.

According to the SCRU, the influx of refugees is constant but the spikes in numbers usually occur when rural areas such as Idlib and Hama are bombed by the regime. They flee the challenges of living under attack to seek safe haven in the camps, but are faced with other, different challenges such as finding clean water, electricity and proper hygiene. 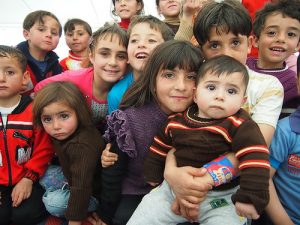 What were peaceful, non-violent protests in Syria in 2011 have evolved into a devastating civil war in 2013. Syrian refugees have been forced to make due with whatever resources they have at hand to survive. Some Syrians have come to regret at having begun the protests two years ago. A young Christian Syrian girl, who asked to remain anonymous for security reasons and volunteered in the Rayhana Camp in Lebanon told me that many refugees say “had they known they would end up in this situation they would have never gone through with it.” She described a child in the refugee camp that cried suddenly when he was given the lyrics to a song to sing.

“We asked him why he was crying and he said that because he hadn’t been able to attend school in two years, he had forgotten how to read,” explained the volunteer. According to this volunteer, children arrive to this camp having gone through very difficult situations.

“Many kids come with the burden of loosing a loved one, the instructor we worked with was 17 years old and she lost her sister while still in Syria. Many kids arrive alone to the camp, some walking, others on a bus that picked them up and brought them to us,” she said. All are traumatically affected by the cycle of violence taking place in their country.

In a video on the UNHCR website, viewers can see how these refugee children’s anger is expressed in the games they play. They make men out of mud and create a scenario where an attack happens and the men are killed. The children’s battles inside the camp is like an eerie reminder of what is currently taking place in their homeland. Perhaps such activities prevent these children from envisioning a peaceful future while inside these overpopulated, over stretched camps.  What is certain is that one million children have been robbed of their childhood and security but, not of their dreams to return home…one day. 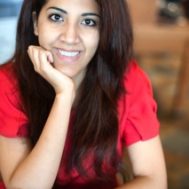