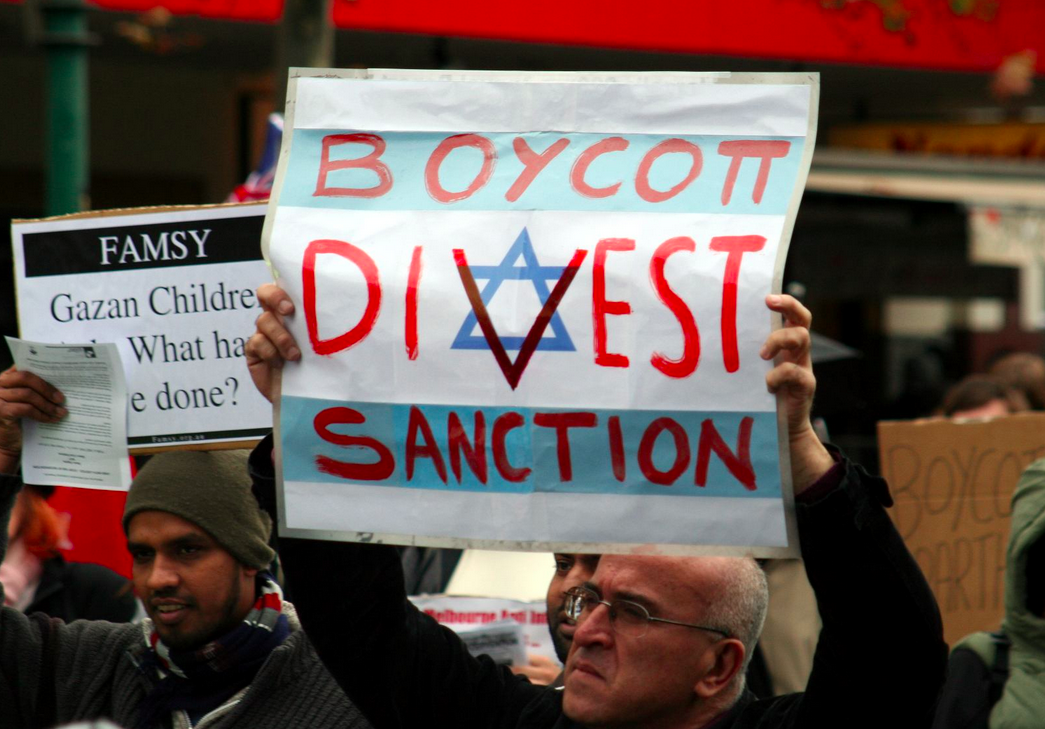 The “Existential Threat” that is BDS

For over seven decades, Israeli leaders have claimed that enemies bent on destroying Israel surrounded their tiny nation. Israel’s surrogates in the U.S. Congress have effectively used such an argument to increase military aid to Israel. But not all of Israel’s enemies are treated equally.

According to how the winds are blowing over the Israeli Knesset, certain “enemies” get elevated to an “existential threat” — a term that has been used frequently during the past two years to describe Iran’s nuclear program. But as of May this year, the “existential threat” title has been bestowed on a new enemy called BDS. 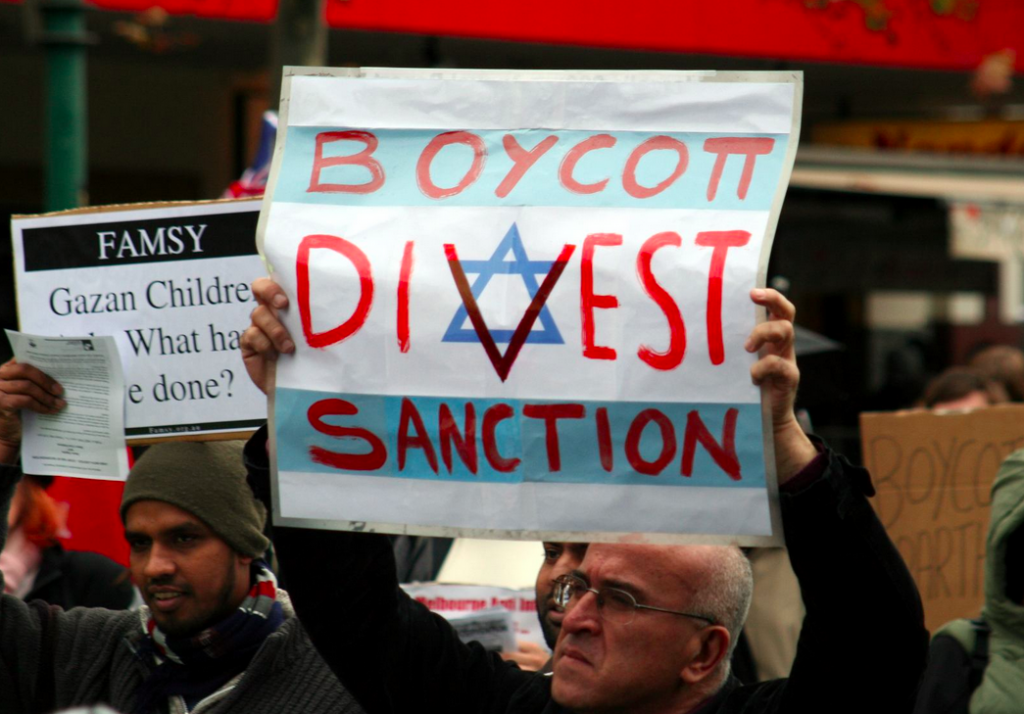 At the start of his weekly cabinet meeting Sunday, May 31, Israeli Prime Minister Benjamin Netanyahu issued a grave warning that Israel was facing a great struggle against a new existential threat.

“We are in the midst of a great struggle being waged against the State of Israel, an international campaign to blacken its name. It is not connected to our actions; it is connected to our very existence.” Mr. Netanyahu was referring to BDS — Boycott, Divestment and Sanctions — a peaceful movement that, while possessing neither an army nor a nuclear program, has nevertheless created panic within the Israeli government and its lobby in the United States.

BDS, which turned 10 years old July 9, was initiated by Palestinian civil society in 2005 as a strategy that allows people of conscience to play an effective role in the Palestinian struggle for justice. Netanyahu and other Israeli leaders initially dismissed BDS calls for the boycott of Israeli products made on illegal colonial settlements in the West Bank as a “gimmick.” However the grassroots movement has steadily expanded to include academic institutions, student groups, labor unions and other organizations spanning over six continents. One noteworthy, but by no means only, example of this occurred in December 2014. UAW 2865, a union representing 13,000 University of California graduate student workers, became the first American union to join the BDS movement.

Netanyahu in June approved the allocation of 100 million shekels for the Ministry of Strategic Affairs to fight BDS. He said 10 positions would be created to deal solely with “the boycott and de-legitimization activities against Israel.” Meanwhile, in a not-so-secret Las Vegas summit, billionaires Sheldon Adelson and Haim Saban raised $50 million to counter BDS on U.S. college campuses.

“You no longer have to worry about financing and fundraising. You just need to be united,” Israeli-American businessman Adam Milstein promised.

Only individuals willing to pledge a minimum of $1 million were invited to the summit. Adelson, who bankrolled Netanyahu’s political campaigns for many years and poured millions of dollars into Mitt Romney’s failed U.S. presidential bid, set aside his differences with rival Saban, a major supporter of the Democratic presidential candidate.

“When it comes to Israel we’re absolutely on the same page,” Saban said in a joint interview with Adelson on the Israeli Channel 2.

Even two-time presidential candidate and former Secretary of State Hillary Clinton has joined the campaign to “counter” BDS, according to a letter she wrote July 2 to Saban, seeking his “thoughts and recommendations.”

“I know you agree that we need to make countering BDS a priority,” Clinton wrote. “I am seeking your advice on how we can work together … to reverse this trend with information and advocacy, and fight back against further attempts to isolate and delegitimize Israel.”

The panic over BDS has also made its way into the halls of U.S. Congress. BDS has replaced Iran as a blackmail card for the Israeli lobby to use against the Obama administration in the form of a trade bill containing provisions opposing the BDS campaign against Israel. Two amendments opposing BDS in Europe — one sponsored by Sens. Ben Cardin, D-Maryland, and Rob Portman, R-Ohio, and the other by Reps. Peter Roskam, R-Illinois, and Juan Vargas, D-California — were included in a trade authorization package that was considered must-pass legislation for the Obama administration. The amendments make it an objective in U.S. trade negotiations with the Europe Union “to discourage politically motivated actions to boycott, divest from, or sanction Israel.”

“The recent wave of boycotts originating in Europe, including French telecom company Orange’s decision this month to sever ties with Israel, demands a robust response from the United States. This is that response. The bipartisan [Trade Promotion Authority] provisions I authored are simple: if you want free trade with the United States, you can’t boycott Israel,” Roskam wrote in a statement in June.

President Barack Obama signed the trade bill in June, which included the anti-BDS amendments, much to the pleasure of the pro-Israel lobby in Washington. However, administration officials signaled it would likely not put much weight behind these provisions.

Israel’s aggressive reaction to BDS is similar to South Africa’s apartheid regime, which also took a forceful approach toward boycotters and made it illegal to call for boycotts or foreign sanctions against the racist regime in Pretoria. Just like Netanyahu, P.W. Botha in 1987 lashed out against foreign governments that imposed sanctions against his regime and accused them of playing into the hands of terrorist groups. Also, like Netanyahu, Botha insisted that his country’s problem was not the injustices created by its brutal policies against indigenous people, but merely false perceptions fed by zealot groups and biased media.

Despite all of this, international pressure on Israel has dramatically increased, especially after its bloody war on Gaza in the summer of 2014, which resulted in the death of more than 2,100 Palestinians, 25% of them were children, and inflicted a heavy toll on a besieged population.

In Europe, and to a lesser extent in the United States, nongovernmental organizations, artists, cultural and academic institutions, and governments have been targeting products and companies (Israeli and international) that profit from the violation of Palestinian rights. Meanwhile, a recent report published by the United Nations Conference on Trade and Development shows that foreign direct investment in Israel dropped almost 50% last year compared with 2013 as the country continues to feel the effects of the Gaza conflict. The poll’s findings illustrate that 5.7 billion euros were invested into the country in 2014, compared with 10.5 billion euros in 2013, a 46% decrease.

Ronny Manos, one of the report’s authors and a researcher in the department of management and economics at the Open University of Israel, said the decline was primarily caused by fallout from the Israel Defense Forces’ Operation Protective Edge and international boycotts against the country for alleged violations of international law. One of the most visible results of international pressure on companies to refrain from investing in the Israeli economy is soft drink company Sodastream International, which was forced to close one of its West Bank factories, a move celebrated as a victory by BDS supporters.

Most recently, the United Church of Christ passed a resolution to support BDS. “As disciples of Jesus, we hear and seek to heed his call to be peacemakers, responding to violence with nonviolence and extending love to all,” said Rev. John Deckenback. “It is in that spirit of love for both Israelis and Palestinians, and a desire to support Palestinians in their nonviolent struggle for freedom, that the United Church of Christ has passed this resolution.”

The BDS train has left the station and seems unstoppable. It has been making steady headway in putting Israel on the defensive in a way previous campaigns failed to do. At the end of the day, how can one defend Israel’s brutal occupation of the West Bank, keeping 1.8 million Palestinians in Gaza locked in the largest open-air prison, maintain apartheid-like policies for Palestinians with Israeli IDs, and allowing Jewish colonial settlers to profiteer from products they illegally produce on stolen land?

Israel’s supporters, however, are relentless and have shifted tactics from initially dismissing BDS to labeling it anti-Semitic and calling it a campaign wanting to “destroy” Israel, not taking into account that BDS is supported by several Jewish and Israeli organizations.

BDS “is anti-Semitic at its core,” Netanyahu said. Tzipi Hotovely, Israel’s deputy foreign minister, has also called BDS a tactic of “diplomatic terrorism” and an “existential threat” to Israel. But is it?

In a letter published in the Washington Post, Allan C. Brownfeld of the American Council for Judaism wrote, “Judaism is a religion of universal values. Israel is a sovereign state. It has violated international law by occupying the West Bank and East Jerusalem. The boycott movement is a nonviolent effort to show opposition to this occupation, similar, its advocates argue, to the sanctions movement against South Africa to show opposition to apartheid. Hatred of Judaism or Jews, which is what constitutes anti-Semitism, appears to be absent from these boycott efforts.”

The Palestinian struggle against the Israeli occupation has undergone many phases, ranging from armed struggle to two Intifadas (uprisings) and a beleaguered attempt for a negotiated peaceful solution through the Oslo Accords. The recent successes of the BDS movement, although many have been modest and symbolic, mark a new phase in which a global community has been mobilized to bring justice for an occupied nation that has suffered for so long without firing a single bullet.

Israeli leaders, who initially ignored BDS, are now taking the offensive to fight and delegitimize it by exaggerating its danger, calling it an “existential threat” to Israel or accusing supporters of promoting anti-Semitism. But with these actions, are these very leaders actually helping the boycott movement grow and succeed? 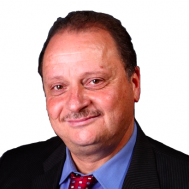 Jamal Dajani is an independent journalist and an award-winning producer.