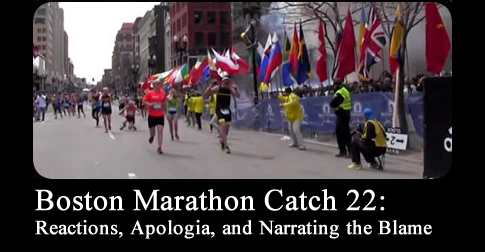 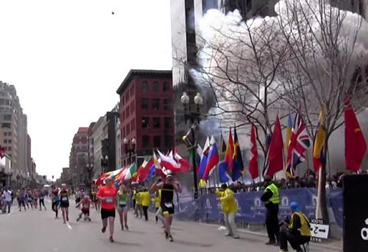 On Monday April 15th, two blasts sent ripples of fear, panic and confusion across the faces and minds of thousands of people as the first group of runners approached the finish line at the Boston Marathon, one of the world’s most renowned events of its kind. Within moments and then hours, images and videos of bloodied streets, faces and detached limbs began piling up. It all seemed surreal and those early ripples quickly turned into waves of suspect and uncertainty. At the time that I am writing this, early Tuesday morning, there is more murky speculation than any semblance of a satisfactory beginning to an answer as to what exactly happened and why.

Here’s what we do know: we know that two bombs detonated at two different sites along the route of the marathon which included the last mile which was dedicated to the victims of the Newtown massacre and where even some of their family members sat. where many families of the Newtown massacre victims were seated. We know that three people have died as a result of the blasts thus far, including an eight year old child. We know that over an estimated 130 people have been injured, many of who remain in critical condition and many of whom have lost limbs. We know that several people were questioned by the Boston Police Department. We know that there is yet to be any statement of responsibility by any domestic or foreign group. We know that there is yet to be any arrests made and that there is also little (at least public) acknowledgement of any suspect individuals or groups; although according to CNN, investigators have asked to be on the lookout for a particular individual, described as ‘dark skinned or black, with a possible foreign accent’. This, however, seems to be an unverified report that is not sourced anywhere else. We know that the BPD is no longer handling the investigation alone, with the FBI having just recently taken over; they are treating it as a criminal investigation as well as a potential terrorist attack. We know that security has been increased in several major US cities, including Los Angeles, DC and New York as well as several international cities. We now know that previously suspect devices found in the Boston area, believed to be possible detonators, were discovered to not be as such.

Thus, what we seem to know falls, broadly, into three categories: Victims, Speculation and Security. Of these three, Speculation is perhaps the one which best characterizes reactions to the events. As much concern as there is about the victims (and now the heroism of so many first responders, bystanders and participants) and interest in the investigation, the usual court of the public and the media has been unable to resist speculating about the who’s, what’s and why’s about the attacks.

In a piece published within a couple of hours of the attacks, Washington Post’s Max Fisher wasted little time in raising attention to the visceral dread that had struck the hearts and minds of many American Muslims’: ‘Please don’t be Muslim.’

The article is a bit suspicious in terms of its characterization of some glorious single Muslim world in complete dread of the identity of the perpetrator[s] of the attacks by way of a handful of tweets, contextualized oddly with the Libyan condemnations of the the attacks against the US Embassy, in Benghazi, in late 2012. Despite its generally questionable content, Fisher’s article does highlight an issue that has become as much as a regular occurrence as it has become polarizing.

Muslim Guilt, Communal Incrimination and the Catch-22 of it All

Since the attacks of September 11, 2001, any and all domestic incidents of violence without initial knowledge of the perpetrators have been met with held breaths by the American Muslim community. The community has feared social backlash and incrimination by association. The reaction has become, as mentioned previously, just visceral: pangs of fear mixed in with prayer hit the gut and swirl around our stomachs until we have some sort of an answer. This reaction has elicited much criticism from both within and outside the community. Many, especially in lieu of yesterday’s attacks and the ‘virality’ of the Fisher article, have accused such a reaction as ‘self-serving’, ‘selfish’, misplaced and shortsighted. Instead of focusing on the victims and the situation, critics argue that these reactions (specifically when publicly broadcasted) prioritize a sense of self-victimization that is met with either sighs of relief and smiles when an alleged perpetrator is not Muslim or with obtuse amounts of knee-jerk apologia and over-zealous PR tactics when a suspect is. American Muslim organizations have gained a certain sort of infamy for their quick condemnations of any major attack or act of violence, near regardless of the identities of the perpetrators. This, of course, comes in the context of years of bombardment of the silly (and still racist) accusation that ‘Muslims don’t condemn acts of terror.’ In a politically and socially marginalizing atmosphere, Muslim American organizations, in particular, are backed into a corner which leaves them in an unfortunate catch-22: if they do not condemn any and all violent attacks (or are late in doing so), especially those (however erroneously and disturbingly) suspected to be associated with Islam, then they are supporting or, at the very least, tolerating such violence. If they do condemn these acts, then they are kowtowing to a greater narrative of incrimination of a group of over one billion.

Thus the question is: Is it self-serving for the Muslim community to express concerns about the identities of alleged perpetrators of attempted mass violence or is it a justified reaction?

It is easy to criticize Muslim American organizations for their swift condemnations, but what’s missing in these criticisms is the acknowledgment of the precarious public positions and roles these organizations hold. The organizations do not hold the privilege of picking and choosing how and what to condemn, because that exercise in public relations is – as precedent indicates – met with a whole other cast of critics pushing narratives of social and political segregation. That being said, it is, indeed, high time for Muslim American organizations and groups to reconsider their public relations strategy. Discussing his paper The Fringe Effect: Civil Society Organizations and the Evolution of Media Discourse about Islam since the September 11th Attacks, sociologist Christopher Bail notes, contentiously, in an interview with islawmix:

I think…mainstream Muslim organizations [will soon] realize that they’re not going to win this positive game, it just doesn’t sell. And when it does make it into the media, which it does occasionally, it doesn’t resonate quite as much. You may have a little bit of coverage, but it doesn’t go to another network; it doesn’t stick in people’s minds. Your local imam condemning a terrorist attack in Iraq is just never going to compete with the fringe organization that says terrorists have secretly infiltrated US universities and the money you’re investing in your 401K is supporting Al-Qaeda.

While he goes on to support ‘stronger and creative condemnations of terror’ by the Muslim community, a problematic point, his above observation is worth consideration. By focusing on creating neat boxes and pretty talking points and, by extension, zealously jumping to condemn attacks, Muslim American organizations and groups inadvertently are playing into the incrimination of their communities and are involving them in states of violence without real reason. This needs to change, yes, but how is it, again, done in a hostile and suspecting national atmosphere?

It is this same atmosphere of distrust that underlines and contextualizes Muslim expression of concern over the identities of alleged perpetrators of mass violence. And it is this same atmosphere that has informed the identity, political and spiritual formation of an entire generation of American Muslims. This is not to say this concern is not often expressed through insensitive words and misplaced priorities, but rather that over a decade of increasing social, legal and political marginalization understandably leaves some queasy feelings of being misplaced as a community and as individuals. Regardless of whether a culprit of some heinous act of mass violence is Muslim or not, Muslims do face, at minimum, speculative backlash amongst legal and political.

While the Muslim visceral dread of association with a culprit of mass violence may be self-serving, it cannot be seen and discussed without observance of the context and precedent in which we are operating. The smoke had not even begun to clear from the last few miles of the Boston Marathon, when the media had begun to speculate involvement. The New York Post was the first to wrongfully claim that the police had held a Saudi national male, who had been injured in the attacks, as a “person of interest.” While BPD officials, the Twittersphere and countless journalists were quick to counter the Post’s claims and condemn its hate-mongering, many major news publication websites and networks latched onto the ‘Saudi national’ angle. The LA Times, NBC (it seems the network has removed online references), ABC (from 6:30 am EST this morning), CBS, several other major networks and publications as well as local channels across the country did not hesitate to make mention, however brief, that a twenty year old Saudi national, who had received terrible burns, was being questioned by the BPD. While most, if not all, noted (eventually) that he was not a person of interest, the mere inclusion and focus of one man, who happens to be Muslim and Saudi, out of several who were questioned by the BPD, markedly points to the sort of narration and framing of silent blame in the public court of opinion. This sort of coverage makes it difficult to ignore the sort of national chauvinism that is involved in framing the blame of violence. There is nothing to suggest that the culprit[s] of this attack are Muslim, yet that fear and reach into memory is the easiest and ‘safest’ bet for making sure your audience is listening, reading. When the threat is foreign, we are on higher alert. When we are on higher alert, we’re more likely to watch those 24-hour news channels, to click every link available, to retweet every 140-character statement of supposed relevance.

In a 2004 article written for the Boston Review, Diego Gambetta discussed the collective air of irrationality that follows traumatic events. Gambetta was writing specifically about how irrational actions were rationalized following the events of 9/11 and how the fear of the American populace was manipulated. What followed, he says, were overreactions after overreactions: there was a constant and sustained fear of terrorism and almost all terror plots were proven inconsequential and almost all terror suspects were proven innocent or, at the very least, harmless. That did not, however, stop the belief that the threat existed. And it is this same belief, of the threat of Muslims as the source of ‘terror’ and mass violence that means something far more than the number of casualties, that continues to frame and narrate our engagement in the public spheres, specifically within the media. Even stories and reports on the ‘normalcy’ of American Muslims and their day to day lives operate on assumptions of distrust and suspect.

So, how can we so easily cast aside that pang of a mixture of fear and prayer that forcibly and uncontrollably hits so many every time there are blaring headlines of domestic mass violence? This isn’t about guilt by association: it is about a community’s continued fear of being feared. 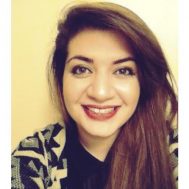