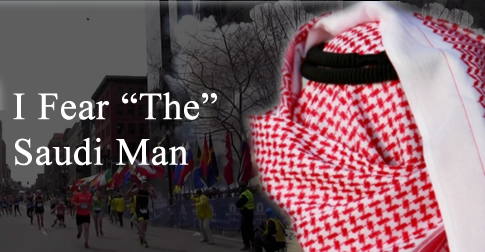 I mean I fear for “the” Saudi man.

Ever since the bombings, I will admit being pleasantly surprised by the media for not being overly speculative with respect to the Saudi man who was, for a short period of time, considered a “person of interest” by authorities. The usual ominous undertones associated with the identification of an individual of Muslim descent after a bombing was largely absent (Fox news aside).

At the same time, an ideal scenario would have been to eliminate any ethnic affiliation at all: “a 22-year-old man” would have served better value than mention of him being “Saudi.” The end result is that one descriptive word sensationalized the conversation. If he or she is present with authorities and no one is looking for him or her, why mention the ethnic background before any determination is made with respect to a connection with events?

All through Monday, there was no mention of his name—he was anonymous, Saudi and 22. The FBI detained him, questioned him and raided his apartment, then decided he was just a witness.

Here’s what scares me about this: The authorities apparently spent considerable time investigating a man of Middle Eastern descent who had no connection whatsoever to perpetrating the bombing, distracting them from finding the actual bomber(s), who remain at large.

What also scares me is that I now know this Saudi man’s full name. I know where he goes to school. I know the names of all his roommates. I know his address. Worse, I see his photos all over the Internet. One news site, after saying the Saudi was just a witness, posted a rather large photo of him dressed in his Saudi garb and holding what looks like a ceremonial gun. It is gold.

Here is a student in Boston who attended the marathon, was put in harm’s way, ran away in fear, was tackled to the ground, questioned for 24 hours after suffering serious burn wounds and witnessing people’s limbs being blown off, and then was unfairly identified as a “person of interest” in this event.

I am saddened over the hell he went through since Monday. I am concerned for the shock he must have felt in the event’s aftermath. I almost want to apologize to him myself on behalf of what potentially could happen in this kind of situation. To be frank, I also fear for him.

Emotions are high right now. We are angry. “Who would do such a senseless act?” We want answers. We want to direct our anger at someone. We want justice. Except, there is no one to direct it at. For all Americans, it made sense that there was a Saudi person of interest, albeit for a short period of time. I can only imagine the dinner conversations and water-cooler chatter . But now, there is no one to talk about—no one to assign blame to. And for some Americans, it may take time to move from hating him to hating…um…who? When emotions are that charged, trying not to be angry at him, or Muslim men, or Arab men could be difficult.

And I still fear for him for this highly charged environment; there’s a chance that certain people may unfairly continue to associate him with the event and attack him for being Saudi, or Muslim, or living in America or for happening to be at the wrong place at the wrong time.

What angers me the most, aside from the unjust profiling, is that the media went so far as to publish his name, photo and everything else about him, making it too easy to find him. Shame on the media for publicizing an innocent man’s image and address in a climate of highly charged emotions. We are creating more victims in our effort to find the people responsible for these heinous acts. This should not happen.