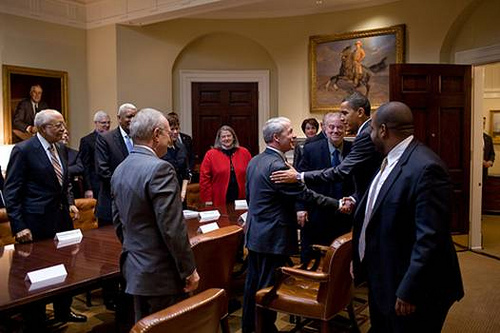 President Obama with the Advisory Council on Faith based and Neighborhood Partnerships. Photo courtesy of GC Communication/Flickr.

You’ve heard that we need to reduce our carbon footprint? Carpool, telecommute, use public transportation, switch to an electric car, or my favorite: you can help reduce paper waste by actually getting this organization to take your name off lists so you don’t get junk mail. Sure it’s a sacrifice, but we all have to play our part, right?

But the world doesn’t just suffer from a carbon emissions surplus. It faces a dire compassion scarcity. Just as we need to reduce our carbon footprint, it is time to also expand our compassion footprint.

The path forward is encapsulated in this verse of the Qur’an:

“We have not sent you except as a Rahmah to all the worlds.”

This is God addressing the Prophet Muhammad, Peace and Blessings be upon him. Now reflect on that with me for a moment. God could have called the Prophet a guide, a teacher, a sage, or even an example for all the worlds. But He chose to call him a ‘Rahmah’, a word that means mercy, compassion, limitless love and unconditional generosity. It comes from the same root as ‘rahm’ the Arabic word for womb. A mother’s womb is the ultimate example of unconditional love, giving without waiting to receive, nurturing and protecting selflessly. This is how our prophet was described by God, as a rahmah to all the worlds, not just Muslims, not just believers, not just human beings, but to be a source of this compassion for every thing in existence.

He is our example. And so it follows that Rahmah must be our defining quality, just as it was his. The Prophet wasn’t a rahmah to all the worlds by organizing conferences or giving good speeches. He was compassion incarnate because he fed the poor, cared for the orphans and forgave his enemies. No human being left a greater mark of mercy than Mohammad ibn Abdullah of Mecca.

His legacy lives on in millions of Muslim Americans. One shining example is the University Muslim Medical Association Community Clinic (UMMA),  a full service free medical center started by Muslim medical students in South Los Angeles, one of America’s most underserved and impoverished communities.

The founders of this exceptional went to one of the most deserving areas in the country, where quality health care is scarce, and established a compassion footprint. They turned their belief in the example of the Prophet as a Rahmah to all the worlds into a concrete reality on the ground. And because God loves grand things and dislikes petty things, they dreamed big. They wanted to establish a perpetual and permanent sadaka. So they worked with the city and local officials to create a standing clinic. And they knew that compassionate footprints must be defined by excellence, not mediocrity. They realized that this tireless act was a gift for God and it must be done with sincerity and with the greatest care. Their mission wasn’t simply to offer those with no resources healthcare, but to promote their well-being with the highest quality of healthcare. And this footprint, grew with time, adding more patients, more services, and becoming federally qualified health center.

And while many of us have looked on with tremendous pride as UMMA community clinic grew, overcoming enormous challenges, its impact reached far beyond the boundaries of South LA. UMMA has inspired people around the country to serve. I learned this first hand when I served on President Obama’s Advisory Council on Faith based and Neighborhood partnerships. 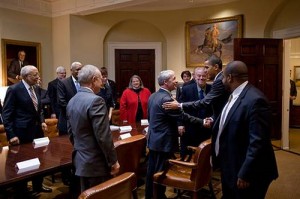 President Obama with the Advisory Council on Faith based and Neighborhood Partnerships.
Photo courtesy of GC Communication/Flickr.

One of the first things President Obama did as leader of this country was to call the nation to community service. This United We Serve Summer campaign would culminate with September 11th, which the President designated as a Day of Service and Remembrance. For the first time since the horrific events, 9/11 would be a day to unite as a nation.

As a member of the White House advisory council, I along with the other members, were encouraged to mobilize his or her community to answer the call to serve. So with a group of amazing volunteers, we created the Muslim American Answer the Call campaign. This effort was our community’s response to the Present’s call to service, to the call of those in need, and most importantly, to God’s call to serve Him by serving others.

Our team went to Muslim American organizations, including many in this area, who enthusiastically called on their members and networks to respond. I had never seen such an outpouring of support. From across the ideological, ethnic and socio-economic spectrum, Muslim American organizations and leaders used Friday khutbahs and Facebook, email lists and phone calls to mobilize people toward service. They organized trash clean up efforts, food drives, and educational campaigns. They fed the hungry, clothed the needy and built homes for the homeless. Muslim accountants offered free classes on financial literacy, while charities donated books to under funded schools on Native American reservations.

As our team collected and documented the literally thousands of service projects from New York to Newport Beach, we discovered dozens of Islam inspired free medical clinics across the country, providing healthcare to the uninsured. None as old as UMMA, or as large, but all inspired by UMMA’s example.

The thing about acts of sincere compassion is their far-reaching impact. In the Qur’an a sincere act of giving is compared to a seed that produces multiple fruit that multiply. By standing as an example of sincerity, UMMA clinic has motivated many others to expand their own compassion footprint.

UMMA community clinic was recognized on a national level. I have heard Senior White House officials cite UMMA clinic when discussing solutions to America’s healthcare crisis. Leaders from the clinic have been invited to round table advisory discussions at the White House on the healthcare crisis, along with leaders of other clinics. They are part of these conversations not because this is a Muslim issue, but because this is an American challenge that UMMA is helping to overcome. UMMA community clinic is helping to build a stronger America. This is what it means to leave a compassion footprint.