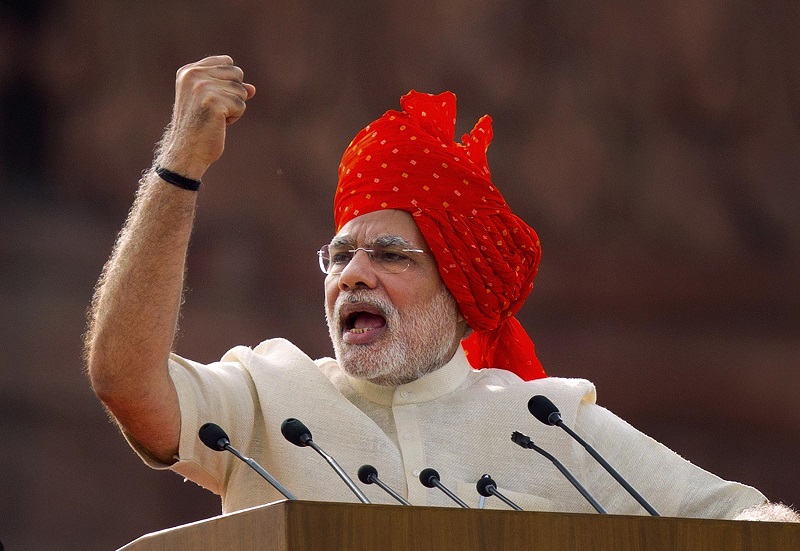 India is currently home to the second-largest Muslim population in the world (194.8 million), and by the year 2060, it will have the largest Muslim population (over 333 million, according to the Pew Research Center). Although Muslims constitute nearly 15% of the Indian population today, we are witnessing the meteoric rise of right-wing Hindutva nationalism under Prime Minister Narendra Modi, which seeks to quash Muslim identity in the land of Mahatma Gandhi.

Over a decade before becoming prime minister, Modi’s political legacy was forever tainted during anti-Muslim pogroms in the western state of Gujarat where he served as chief minister. According to reports, over 2,000 Muslims were murdered during carefully planned attacks of unprecedented savagery, all during Modi’s watch.

Some of Modi’s closest political aides were found guilty for their roles in the 2002 anti-Muslim mass murders, during which “large numbers of [Muslim] girls were raped; men were cut to pieces and burned alive with kerosene. Pregnant women had their womb slit open and the fetuses smashed in front of their eyes,” according to legendary historian, William Dalrymple (who once referred to Modi as “India’s Vladimir Putin” during an interview with CNN’s Christiane Amanpour).

In a rare public comment on the anti-Muslim ethnic cleansing, Modi bizarrely summed up his regret as what he would feel with a “puppy being run over by a car.” A 2002 Human Rights Watch report found that “the attacks against Muslims in Gujarat have been actively supported by state government officials [like Modi] and by the police” during his tenure as chief minister.

Modi is a lifelong member of the Rashtriya Swayamsevak Sangh (RSS), a paramilitary Hindu nationalist group “inspired by the fascist movements of Europe, whose founder’s belief that Nazi Germany had manifested ‘race pride at its highest’ by purging the Jews,” according to award-winning Indian writer Pankaj Mishra. In the past, Modi has gushed about the second supreme leader of the RSS (M.S. Golwalkar), whom Modi once lovingly referred to as “Pujiniya Shri Guruji” (Guru Worthy of Worship).

Golwalkar once expressed admiration for Adolf Hitler’s Final Solution in Golwalkar’s 1939 book, We or Our Nationhood Defined: “To keep up the purity of the Race and its culture, Germany shocked the world by her purging the country of the Semitic Races — the Jews. Race pride at its highest has been manifested here. Germany has also shown how well-nigh impossible it is for Races and cultures, having differences going to the root, to be assimilated into one united whole, a good lesson for us in Hindusthan to learn and profit by.”

Although Muslims represent the largest religious minority in India, they are also one of the most economically disenfranchised groups in the country. Muslims are likelier to live in villages without schools or medical facilities and less likely to qualify for bank loans simply because of their Islamic faith. A New York Times piece once found that Islamophobia within mainstream Indian society had become “so rampant that many barely muster outrage when telling of the withdrawn apartment offers, rejected job applications and turned-down loans that are part of living in the country” as an Indian Muslim.

“Relations between the communities are not normal,” Rajiv Shah, former political editor in Gujarat for the Times of India, once told the Los Angeles Times. “There is no interaction between Hindus and Muslims except at very high income levels.”

In two of his most recent political moves, Modi continues to bolster his Islamophobic bona fides. In August 2019, he unilaterally changed the status of Indian-occupied Kashmir (which is overwhelmingly Muslim) when he revoked Articles 370 and 35A of the Constitution. According to Pakistani Prime Minister Imran Khan in an August 2019 New York Times op-ed, this move was illegal under the Indian Constitution as well as UN Security Council resolutions on Kashmir.

In the eastern Indian state of Assam, Modi’s government has also launched the biggest Islamophobic disenfranchisement drive by stripping as many as 4 million predominantly Muslim residents of their Indian citizenship. According to The Telegraph newspaper, these residents of Assam — majority of whom are Muslims originally from Bangladesh — have been unilaterally deemed “stateless” by Modi. According to Reason Foundation senior analyst Shikha Dalmia, the right-wing Modi government is working on passing federal legislation that would confer citizenship automatically to all Buddhist, Hindu, Christian and Zoroastrian migrants from nearby countries — everyone except Muslims.

Although India is the single largest democracy in the world and will house over 300 million Muslims by the year 2060, Modi’s right-wing Hindutva government is doing everything in its sinister political power to ensure that all Muslims in India feels like strangers in their own homeland.