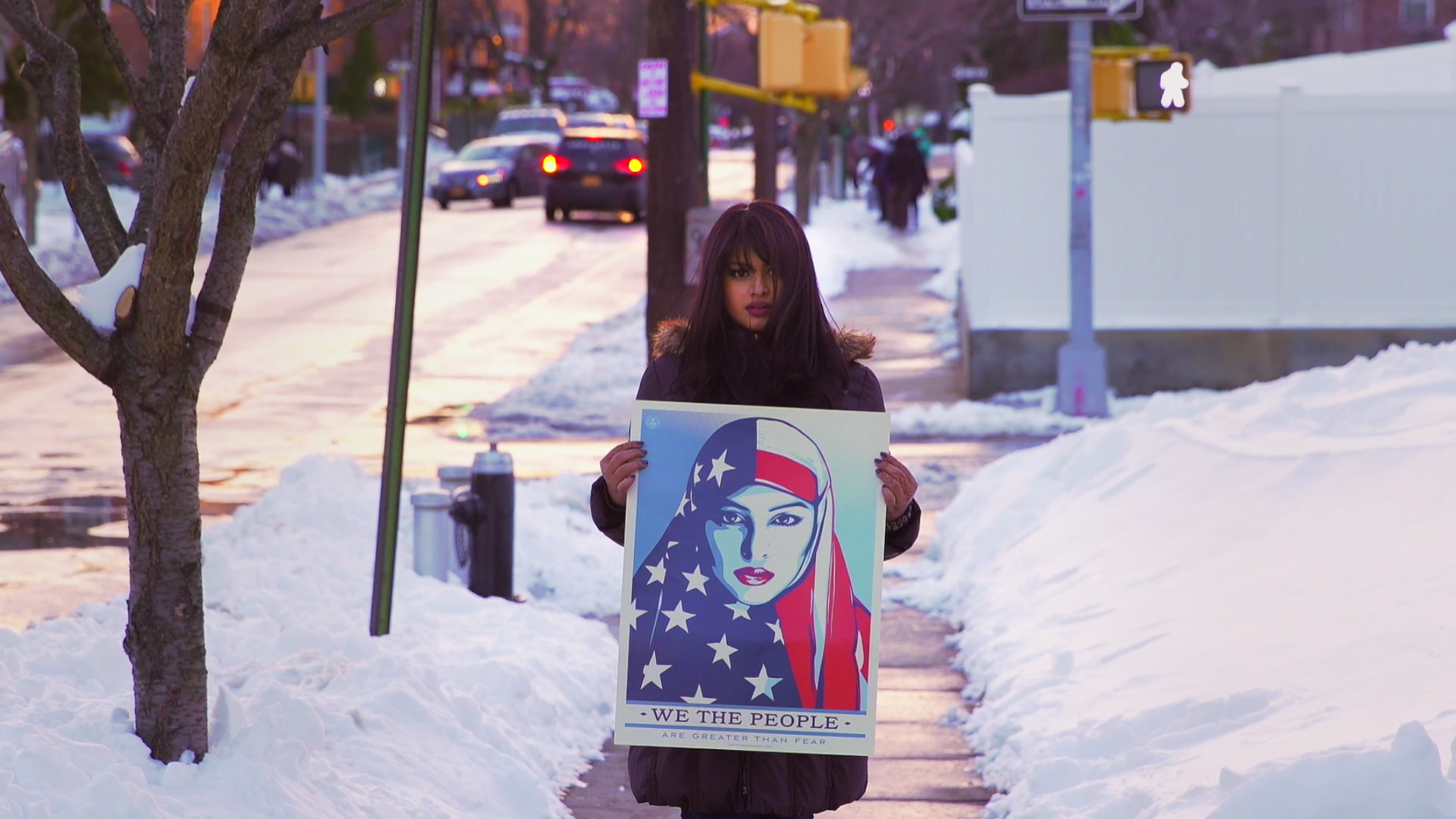 It has been 10 years since the photo was taken of me. The photo that has, in some ways, positively changed my life for the most part. However, the resurgence and continued relevance of said photo sadly indicates that not much has changed for Muslims living in America. At least not in what I’d call a positive direction.

When that photo was originally shot for the cover of Illume Magazine in 2007, many Muslims were fearful, and with good reason: The post-9/11 backlash toward Muslims, Arabs and those who simply appear to be, was still unrelentingly prevalent. The loyalty and allegiance of Muslim Americans was constantly doubted by conservative-leaning political pundits and bigots who refer to themselves as freedom-loving patriots (so as long as that freedom doesn’t extend to freedom of religion for their Muslim co-workers and neighbors).

Our Muslim community leaders and imams would go on record, publicly condemning acts of terror immediately after their occurrence, holding prayers for victims at their respective masjids, and then within days, face accusations of staying silent on the issue. That is still the case today, but there is one crucial difference: The bigots doing the accusing are now the people running the country. We’ve witnessed them empower those who were previously closet racists to display it openly and proudly. We’ve witnessed them incite hateful behavior against people of color for merely being present at campaign rallies. There has been an uptick of violence against Muslims since our current president began his campaign run. What we know to be hate crimes have happened all over the country, even in the places you’d least expect them to; places like my own backyard, in the diverse borough of Queens, New York City. That fear I had for my fellow Muslims in 2007, especially for the most visible among us, has not gone away. It seems that it won’t anytime soon.

This unfortunate revelation has led to the need for a resistance against the forces of hatred that have now been emboldened. In December 2016, Amplifier Foundation reached out to photographer Ridwan Adhami regarding that infamous portrait photo he had shot of my then 22-year-old face. Their aim was to release a series of posters depicting people who represent the groups that were most significantly affected by the hateful campaign rhetoric and the impending presidency.

Shepard Fairey, along with two other artists, created five posters altogether. Amplifier Foundation started a Kickstarter campaign to fund the printing of these “protest images” in newspapers across the country on Inauguration Day. Along with a Muslim woman in a hijab, the posters also highlighted a Latina woman, a child of mixed Black and Asian background, a same-sex couple and an Indigenous elder. They were all beautiful, powerful and resonant in their own ways, but it was pleasantly surprising to see how the Muslim woman in hijab got singled out as the defining poster for the movement, because it’s an image that is rarely, if ever, depicted positively on this scale. This image has now spread throughout the globe, and provided hope and inspiration for people of practically every ethnicity, creed, faith and orientation. Though the feedback has been overwhelmingly positive, there have also been critiques.

Being the face in the original photo, I want to address some of the critiques that have been made of the poster. I’m not interested in addressing internet trolls who have been outraged by the image due to their own fascist and xenophobic ideals. What’s more concerning to me are the critiques made by other Muslimah sisters, whom I believe have every reason to express their thoughts and views on this. I welcome the discussions that have been started by the image, and think it’s crucial we continue to have them as we face a new era of Islamophobia.

One of the earliest and most prevalent critiques is that my poster was misleading because not all Muslim women choose to cover their hair. This is true, and I happen to be all about diverse representations of Muslim women. I have never been full on hijabi, aside from the week I wore an abaya while performing Umrah in Saudi Arabia. Many Muslim women in the United States choose not to wear hijab or niqab. Conversely, an overwhelming majority of Muslim women who do wear hijab do not live in a society that legally mandates it. However, I think it’s hard to argue the fact that a woman wearing hijab is the most visually symbolic and impactful means of identifying that a person happens to be Muslim, without it needing to be explained verbally. I’m not portraying this as right or wrong, I’m simply saying I have no control over this fact. Also important to note is that Muslim women in hijab have been disproportionately targeted in attacks by bigots, precisely because of how they dress. For this reason I feel like it is justified to center the hijab in the photo.

Other people seem to be OK with having a hijab-wearing woman in the poster, but take issue with the fact that the woman is me. One writer in particular, after having read one of my interviews posted online, referred to it as “problematic” that the model in the image doesn’t wear hijab. It stung a bit to read that, but I can understand why and how someone could have that reaction. Perhaps in her view, because I don’t normally wear a hijab, I can’t relate to the experiences and complexities of those who do, and therefore should not be the one to represent them. To that I say, this was a concern of mine initially as well. Even though I was 22 at the time and had taken up print modeling simply as a hobby, this shoot was something I took far more seriously than others. I wanted to represent Muslim women with dignity as well as integrity. It was important enough that I ruminated on it for a bit before fully being on board.

In its origin, this was completely for us, and by us. Fairey’s involvement has definitely helped the image spread, but at its roots, it is a 100% Muslim-funded, Muslim-created project.

What I decided in the end was this: I may not choose to wear hijab or cover in my daily life, but I am a person of Muslim faith, and always have been. I have a deeply personal relationship with Allah (swt) that I carry with me wherever I go and in everything I do. I take pride in representing myself as a Muslim to friends, acquaintances and colleagues when it is appropriate. I do cover my hair whenever I perform salat (prayer), or attend a milaad (a birthday celebration for the Prophet Muhammad), or a prayer in my local masjid, or simply make du’a (supplication to God). My own mother, as of the past few years, has opted to start covering her hair in daily life. It wasn’t something my father was a fan of at first, but he always knew it not to be his place, as a Muslim man, to have a say in how a Muslim woman chooses to dress and appear to the world. Though I don’t personally know the full extent of paranoia and fear that my hijabi sisters experience out in the world, I do know what it’s like to be targeted and verbally assaulted for being a woman of color that in some instances was correctly assumed to be a Muslim woman of color. I also know what it’s like to have your stellar resume and perfectly qualifiable cover letter go the bottom of a pile because of your “Muslim-sounding” name.

The hijab is not a prop or a costume to me, just like the traditional sari and shalwar kameez sets that I wear to Bengali functions, weddings and gatherings are certainly a big part of me and my cultural identity, even though I don’t wear them daily. All that to say, I know in my heart I’m just as unapologetically Muslim as anyone else; vices and all. What Fairey saw in my image, which he said he didn’t see in the other photographs of women wearing an American flag in the style of a hijab put in front of him, was resilience and defiance in my eyes that he felt needed to be conveyed for this project.

That leads to the next major criticism I’ve seen raised. Fairey is non-Muslim and a White male. For this reason, people have expressed legitimate concern that he’s appropriating our faith and image. They worry that this is a project designed for the White gaze. In reality, the original photo was taken way before I (and most people) knew who Fairey was. It featured a Muslim American woman as the model, was shot by a Muslim American photographer, and was featured as the cover image of a publication geared toward a Muslim American readership. In its origin, this was completely for us, and by us. Fairey’s involvement has definitely helped the image spread, but at its roots, it is a 100% Muslim-funded, Muslim-created project.

Lastly, some people have said the poster somehow promotes the idea that Muslims need to succumb to bigots to prove they are American. I don’t see it that way, since I’ve always known myself to be American. I’ve known from how much I cried everyday for months after September 11, 2001, and still do to this day sometimes. I know from my being prone to weight gain due to an inherent love of food (that can most easily be explained by my being American), and from how badly I wished for a different outcome for this election. There’s no denying my Americanness, even if I tried. Not that I ever would.

As the late, great, James Baldwin once said so poignantly, “I love America more than any other country in the world and, exactly for this reason, I insist on the right to criticize her perpetually.” With this in mind, it is an honor and a privilege having my likeness, that of an American woman who is also proudly Muslim, become emblematic of a movement that is reclaiming our America, as an America for everyone.

The author is the face of the famous Shepard Fairey poster as part of the We the People Movement.

The Face of the Movement Addresses Her Critiques on Her Famous Photo
April 7th, 2017