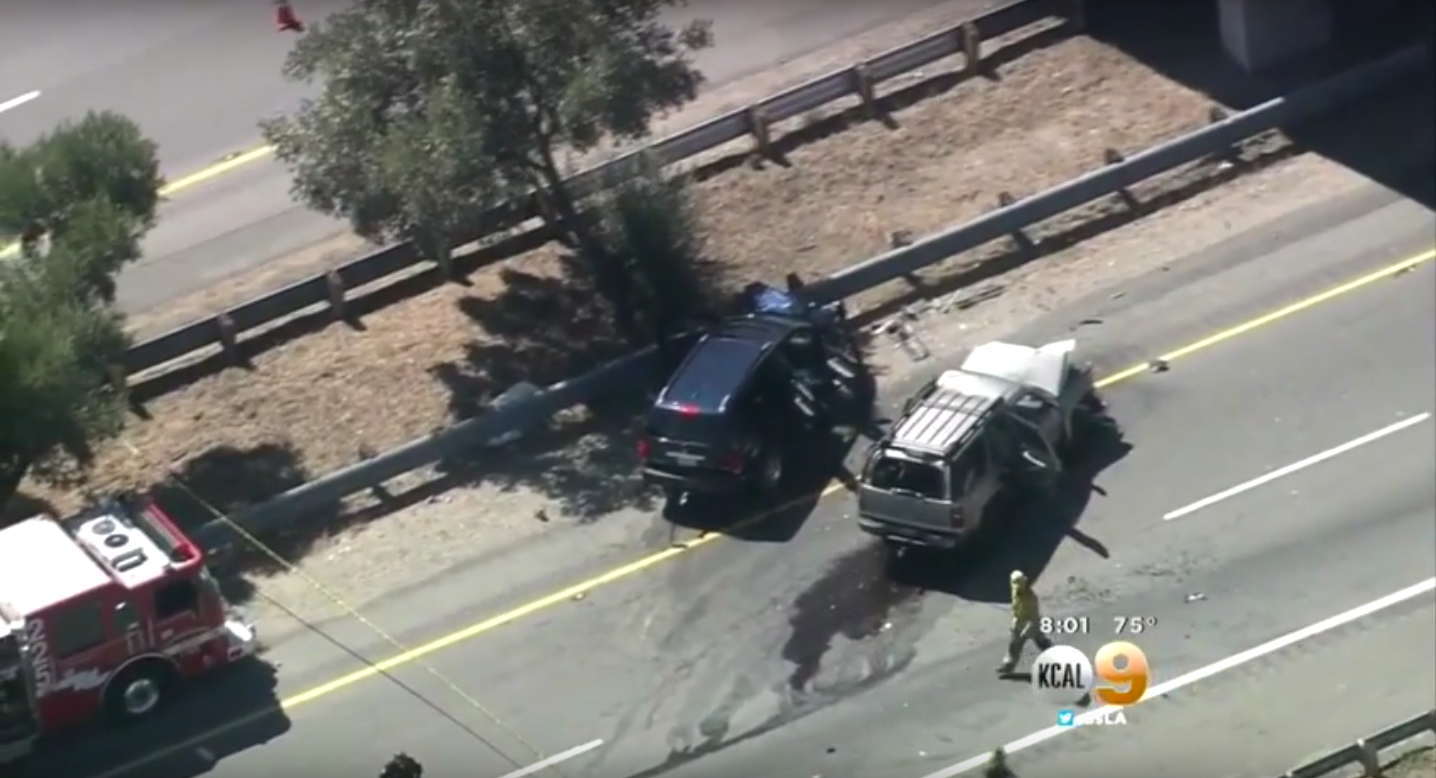 Scene of the shootout with police. >YouTube/KCAL 9

Those paying attention could pretty much read the minds of Western Muslims as police in California’s San Bernardino County chased after two shooters who killed 14 people (injuring 17) at a community center servicing the disabled. “Please God, don’t let them be Muslim,” was undoubtedly what many innocent people were thinking as they waited for officials to disclose the shooters’ identities. After both perpetrators were shot dead in a violent standoff, one could almost hear their hearts drop as the names Syed Rizwan Farook (28) and Tashfeen Malik (27) were revealed. 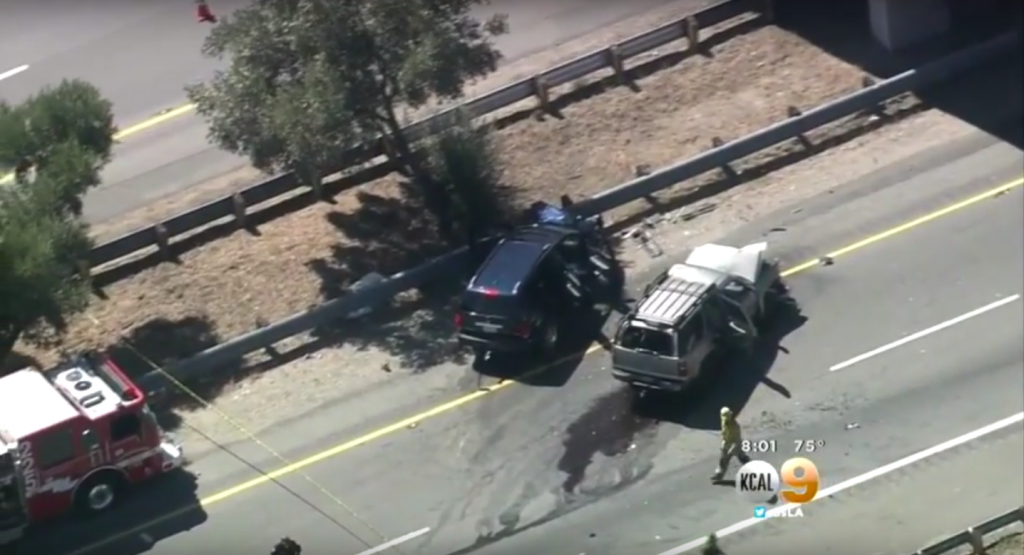 Scene of the shootout with police. >YouTube/KCAL 9

Both are names popularly attributed to individuals adhering to the Islamic faith, thus immediately satisfying the bigoted voices on social media that labeled the incident as “Muslim,” “Islamic” or “Middle Eastern” without waiting for the facts. But, this time around, in a highly politicized environment still reeling from the awful aftershock/backlash of the Paris attacks, major U.S. news outlets dropped the ball in their real-time reporting as yesterday’s events unfolded. The errors show how careless journalism can spread like wildfire, while also reflecting how unexamined public assumptions can assist in the longevity of such misinformation. 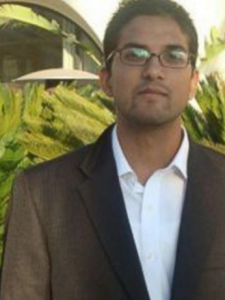 Syed Rizwan Farook as seen on his dating profile on Singlemuslim.com.

The surname “Farook” was reported early on after the suspects’ deaths by The Daily Beast in a piece titled, “Suspect ID’d in San Bernardino Massacre as Syed Farook.” But instead of referring to Syed Rizwan Farook the killer, the article stated that Syed Raheel Farook was the identified shooter, complete with a large photo of a man later revealed to be one of Syed Rizwan’s relatives. Moreover, in a stroke of truly confusing reportage, the original article included a scene of the journalist going to the home of one of Farook’s relatives and leaving with the crucial insight that the aroma of “basmati rice” filled the halls of the house. The inclusion of this latter observation (now omitted) seemed to have less to do with adding journalistic color than with implying that the suspect was of a certain cultural background. The article has since been corrected with an apology from the editors for misidentifying one of the suspects.

Shootings like last night’s are notoriously difficult to follow since the reporting is often speculative, careless or incomplete as different facts are disclosed and changed through various channels at different times. Paying attention to last night’s coverage of San Bernardino, it wasn’t just the careless tradecraft that showed through, but the constant framing of the attack as a potential Muslim-related incident. Thus The Daily Beast’s ill-advised decision to include the bit about basmati rice. Last night’s live reporting also showed just how reflective the mass media is of public opinion, its post-9/11 assumptions and the collective need to know first and foremost whether an act of violence can be portrayed and described as “terrorism.”

That the nature of such a shooting is primarily dependent on the religion of its perpetrator(s) is a cultural and political tendency reserved exclusively for Muslims in the post-9/11 West, as if Muslim-perpetrated crimes are so much more insidious and a product of religion over all other factors. It goes without saying that Christianity, among other faiths, doesn’t get the same kind of attention when someone shoots up an abortion clinic.

The U.S. media and the Internet were dying to know who the other dead suspect accompanying Syed Rizwan Farooq was, especially after local reporters near the scene of their deaths said the partner-in-crime appeared to be a woman. This eyewitness observation was tossed aside when the Los Angeles Times’ FBI/justice reporter, Rick Serrano, tweeted that “#SanBernardino police just released the name of one suspect as Teyyeep bin Ardogan, a 28-year-old Qatari citizen.” The tweet caught fire, was retweeted hundreds of times within minutes and ended up as the sole source for outlets like The Washington Times, Mediaite and Fox News, which dutifully repeated the unsubstantiated tweet. Serrano ended up deleting the tweet and calling it a hoax, but he never apologized for the hastiness, nor did he ever reveal exactly where he got the information from. Still, Andrew Peng of Byline has shown that Serrano apparently copy-pasted another tweet posted hours earlier.

The collective reaction to “Teyyep bin Ardogan,” an unusual Turkish-sounding name (awfully close to that of the current Turkish Prime Minister, Recep Tayyip Erdogan), along with his supposed “Qatari citizenship,” was further instructive of just how ready many people were to react to a “Muslim-sounding” name — and how ready they were to further associate the individual’s background with wider implications (Gasp! Turkey! Qatar!!). That Farook’s actual partner was later revealed to be a “Tashfeen Malik” (the two met in Saudi Arabia a couple of years back when Farook was making the hajj pilgrimage, of all things) didn’t help matters.

The Daily Beast and the Los Angeles Times accounted for two of the more egregious errors in last night’s reporting, but it’d be unfair to single them out among the boatload of speculation and misinformation that inevitably accompanied each outlet’s insatiable desire to be first, fast. The age of the 24-hour news cycle and social media has made judgement and reflection in live reporting pretty much a thing of the past. But the stakes are much higher in the post-9/11 era, when there’s undoubtedly something foul in the ether. The public has been conditioned by 14 years of repetitive reporting that emphasizes Muslim extremism and violence as more consequential, more nefarious and more dangerous than any other species of mass violence.

There have been over 350 shootings in the U.S. this year, resulting in over 460 deaths and over 1,310 injuries. That more than one shooting per day. Violent Muslim extremism in the U.S. doesn’t approach these numbers, according the annual analyses at the University of North Carolina’s Triangle Center on Terrorism and Homeland Security. The truth is that America is awash in guns, and if 20 dead children in Connecticut can’t get the politicians and the NRA to change their ways, then 14 dead social workers probably don’t stand much of a chance either.