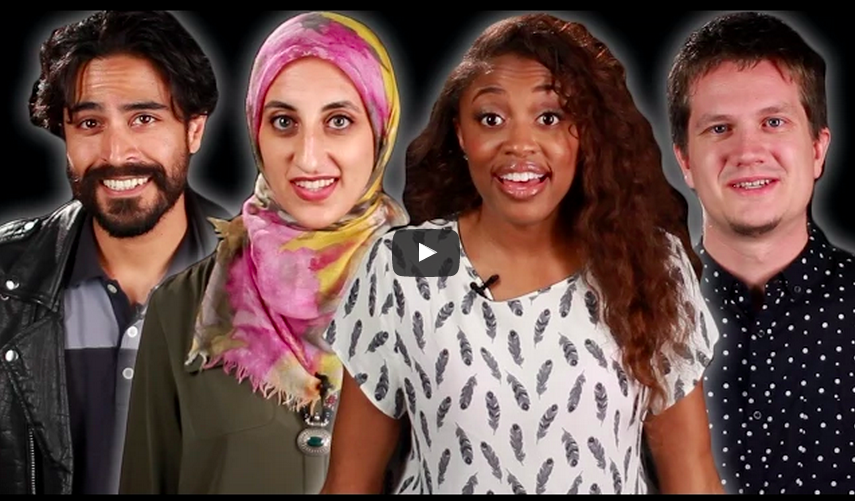 I’m Muslim, and I’m Tired of Proving My Humanity

BuzzFeed recently released a video that has racked up over 15 million views.

15 million views is a lot, it must be pretty interesting, right? Well…

The video consists of a few Americans listing things they like (rap music, Thanksgiving, dancing), and describing what they aren’t (angry, prejudiced, homophobic).

If you’re thinking this sounds pretty boring, I don’t blame you. But wait, here’s the catch, all the people in the video are MUSLIMS.

On the surface, there’s nothing wrong with this video (except the corny music), as it’s just a quick glance into the lives of a small group of people.

But the entire video is predicated on the idea that, somehow, Muslims are different from other people, and the Muslims displayed defy the trend by actually being “normal.”

The people who made the video (and a series of others like it) are billing it as an attempt to defy stereotypes, so they would likely argue that they’re just responding to existing Islamophobic sentiment, with the theme of the video being no different than any other in the series.

They’re right, of course, but it doesn’t matter. This video functions in a different way than some of the other BuzzFeed videos (like the Christian one) because of the systemic oppression Muslims face in the United States, thus serving little purpose besides further demeaning Muslims. As such, the video has the exact opposite effect of its intention.

This sort of discourse is not going to change anyone’s mind, and more importantly, it’s not worth spending time on. There is no excuse for believing in these ignorant stereotypes, and there is no shortage of means to cure said belief. Muslims should stop wasting time defensively trying to prove their humanity to people who will never change their minds.

The video’s ineffectiveness at breaking stereotypes is largely because it attempts to find exceptions to the stereotype, instead of addressing the problematic nature of the stereotype at its core. For example, the video begins with a man proclaiming, “I’m Muslim, but I’m not angry!” Is it a stereotype that all Muslims are angry? Yes. Is the man an exception? Yes. But that’s not relevant here. What should instead be challenged is the idea that it’s wrong for Muslims to be angry, or that Muslims have no reason to be angry. I’m Muslim, I’m angry, and no one can tell me that’s unjustified.

Of course, despite the millions of views, this video on its own can’t shift the way Muslims talk about themselves and are discussed by others. So, if this video was unique, it wouldn’t be that much of an issue. Unfortunately, these sorts of videos and arguments have permeated the way many Muslims engage with non-Muslims over the years.

For example, when I was in Quebec in 2014, segments of the population were trying to prevent public employees from wearing religious symbols, which would directly affect women who wore headscarves. Many of the arguments from Muslims against the ban sounded something like, “We’re just like you! We watch the Montreal Canadiens and eat poutine! Don’t fear us!”

I don’t doubt these people were being sincere, but an argument for equality should not depend on conforming to aspects of the society in which that equality is sought. This video, in effect, if not in purpose, makes the same mistake, and it’s damaging because it leaves many Muslims, who don’t fit in as nicely, out of the conversation.

As an Italian Muslim, I recognize my own privilege in making this argument. I don’t have to deal with the same level of suspicion that racialized Muslims face, and so I’ll never fully understand what makes people succumb to feeling like they must prove their humanity to others.

Regardless, my argument is not intended as a condemnation of the individual Muslims in the video. Rather, it’s a call to stop engaging in these base level debates intended to prove to a hostile audience that we aren’t monsters and instead focus on crafting our own narrative that can address the serious issues we face.