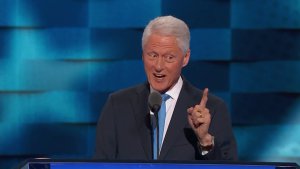 Perspective: Let’s Not Make a Big Deal About Clinton’s “One Line”

President Bill Clinton has always paid attention to semantics. Lest we forget his infamous line, “it depends on what the meaning of the word ‘is’ is”.

Scandals aside, the backlash against president Clinton’s DNC speech last night where he stated that Muslims can stay and help us win if they love freedom and America and hate terror is yet another exercise in semantics but in reverse. Social media exploded over this one sentence, where many stated that he created conditions for Muslims to stay, or fell in to Trumpism, and that Muslims are not the sound bite to terror.

But, perhaps American Muslims are too quick to parse his words to create malicious intent. He’s now being equated with Donald Trump’s toxic xenophobic talk about Muslims and immigrants, and unfairly so.

But taking a step back, not only was his mention of Muslims during a primetime main stage convention historic, but perhaps his words itself were not meant to be as divisive as has been made out to be.

Some might want to consider whether or not Clinton’s line was directed not towards American citizens but immigrants and refugees to this country. My guess, and it’s just a guess, is that he was he referring more to immigration policy and the Trump ban on Muslim immigrants; not creating a litmus test for America Muslims in general. And, if so, does that change the context of what was said? Wouldn’t we want every immigrant in this country (not just Muslims) to love freedom and America and hate terror?

Separately, in the face of increasing mobilization of Muslims within the Republican party, and many others who have been staunch Bernie Sanders’ supporters, Clinton may have been making a clear appeal for American Muslims to join the fight and be a part of Democrats, stay *here* with us Democrats and Hillary Clinton.

Still unnerving is that Muslims are too often coupled with anti-terror tropes in public speeches and statements.  And it doesn’t help that one of our nation’s past presidents chose this platform to do the same. Nonetheless we’ve had a lot of politicians, including Hillary Clinton, who have rightly stated that Muslims are a part of the fabric of American life that can not be unwoven.  Many speakers at the DNC have named Muslims as being part of what makes America great in keeping with the theme that together, we are stronger.

Souheila Al-Jadda is the Editorial Director of TIM. The following was an opinion piece.