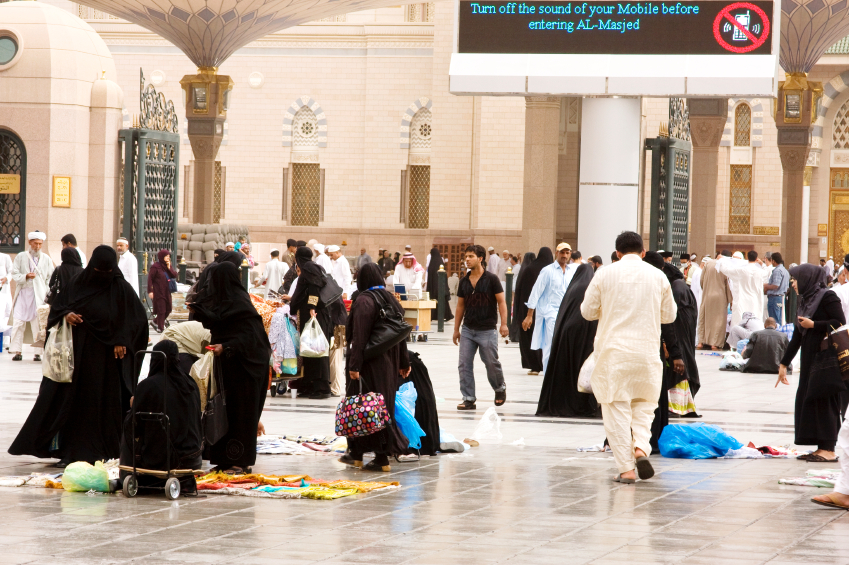 Medina, Saudi Arabia - April 15, 2011: Muslim pilgrims walking in the courtyard of Masjid al-Nabawi ( Prophet's Mosque ) after the noon prayer while street vendors waiting to sell headscarf and prayer rug. As the final resting place of the Prophet Muhammad, it is considered the second holiest site in Islam by Muslims (the first being the Masjid al-Haram in Mecca). courtesy istockhphoto.

Rethinking that “explosion” of atheism in Saudi Arabia

“In the cradle of Islam, a growing number of people are quietly declaring themselves nonbelievers.”

What sounds like the beginning of an early 20th century Orientalist documentary is actually the kicker of a recently published controversial Salon article. The article, claiming that atheists are popping up all over Saudi Arabia, explores an interesting trend in Saudi Arabia, but does so in a sensationalistic manner.

The nature of the “explosion” is described as a “greater willingness [among Saudis] to privately admit to being atheist.” The research depends on “anecdotal, but persistent” stories including a few stories of friends privately confessing their lack of faith to each other.

Obviously, the article is more than a little sensational. Yet, the major problem with this piece is not the conclusion. Rather, it is the reaction the article has generated thus far, which reinforces problematic assumptions about religion in general, and Islam specifically.

Many self-identifying atheists responded to the article with applause, as if they were cheering on something inherently progressive instead of merely tribal.

“There is hope yet in Barbaria”

“The best weapon of mass destruction against terrorism is atheism. Period”

Meanwhile, the Atheist sub-Reddit highly up-voted comments such as the following:

“How much would the entire world benefit if the Middle East experienced a modern day enlightenment? World Peace anyone?”

Aside from the obviously racist “civilizing savages” type language used, these reactions all rely upon the assumption that Islam’s popularity in Saudi Arabia, and the Middle East as a whole, is responsible for the problems in the region. 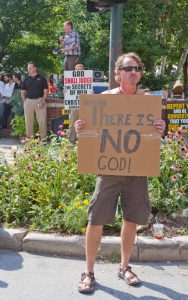 This narrative is not limited to a fringe group of Twitter users. Rather, major atheist figures such as Richard Dawkins, Sam Harris, and the late Christopher Hitchens develop this storyline. These atheists do not speak for all atheists, but the popularity of their various works is enough to warrant concern. This is due to the fact that the “atheism-as-progress” narrative is wrong regardless of its popularity. Atheism is not inherently progressive, nor is Islam the sole, primary, or major cause of troubles in Saudi Arabia or the Middle East.

Atheism is merely a lack of belief in any deity. Atheism is not a belief in anti-oppressive politics, egalitarian societies, or autonomy from imperial interference. Of course atheists can believe in, and work toward, all of these things, but atheism in and of itself in no way guarantees that one will. Atheists can be, and sometimes are, racist, sexist, Islamophobic, supporters of imperialism.

As such, if oppression arises due to widespread belief in certain ideas, as those celebrating the article seem to believe, there is no guarantee that a rise of atheists in Saudi Arabia will end oppression. Moreover, there is no need for Muslims to abandon Islam at all in order to fight oppression.

The oppressive policies in place in Saudi Arabia, most commonly pointed out by genuine critics and Islamophobes alike, are not necessitated or encouraged by Islam. This is made clear by the fact that most Muslim majority states and scholars do not enforce these practices. For example, the Saudi ban on women driving? Non-existent in any other Muslim majority state. The fact that Saudi women are generally prohibited from voting? Unique to Saudi Arabia, as women in all other Muslim majority states can vote, with some doing so as early as 1920 around the time when American women were first granted voting rights. This is not because other states are “less Islamic” than Saudi Arabia, but rather because lawmakers interpret the Qur’an and hadiths in a different, and generally considered to be more correct, manner.

Still, many Muslims are not content with the status of women in Muslim majority states. In fact, there is a growing movement of Islamist feminists who are pushing for visions of gender equality that anyone in the world committed to progressive politics can applaud. These feminists include such figures as Fatima Mernissi, Lila Abu-Lughod, and Amina Wadud. These names are not new, but they do not get anywhere near the attention they deserve. Instead, media air-time is given almost solely to Islamophobes, both non-Muslim, and formerly Muslim.

This trend is tragic because it demonizes Islam, while simultaneously ignoring what many Muslims actually want. There are numerous cases of Muslims resisting secular recommendations by looking for the answer to their problem within Islam.

For example, the West attempted to use feminism to make the brutal invasion of Afghanistan in 2001 seem like a humanitarian mission. Figures from Barbara Bush, to the average American, opposed the Taliban enforcing the niqab, or full body and face covering, on women in the name of freedom.  Yet as Lila Abu-Lughod observes in an article from 2002 in American Anthropologist, titled Do Muslim Women Need Saving, “Liberals sometimes confess their surprise that even though Afghanistan has been liberated from the Taliban, women do not seem to be throwing off their burqas. Someone who has worked in Muslim regions must ask why this is so surprising. Did we expect that once ‘free’ from the Taliban they would go ‘back’ to belly shirts and blue jeans, or dust off their Chanel suits?” In this case, as in many others, reform came from within Islam [for example by women continuing to wear the hijab], not outside of it.

The Salon article even attests to this point as almost all of those quoted in the article describe their lack of faith as stemming from the Saudi government covering up corruption in the name of Islam, not due to a lack of faith in Allah, or God. One quote in the article sums this up particularly well, claiming that some youths “are going to ignore religion and become atheist, while others are going to understand the game [referring to the Saudi government using Islamic rhetoric for its own purposes].”

Saudi youths are not the only ones who fail to understand the game. Those who believe that more atheists in Saudi Arabia will solve the state’s problems make the same mistake by attributing problems solely to people’s beliefs instead of analyzing the more complex historical, political, and socio-economic context within which these problems arise.

This shallow analysis occurs all the time in relation to the Middle East. For example, the Israeli-Palestinian conflict is often presented as an eternal struggle between Muslims and Jews, when in fact the conflict is political, and a relatively new phenomenon. The same sort of rhetoric is used to describe wars among Muslims as conflict between Sunnis and Shias is routinely chalked up to a timeless hatred fuelled solely by theological differences. Medina, Saudi Arabia – April 15, 2011: Muslim pilgrims walking in the courtyard of Masjid al-Nabawi ( Prophet’s Mosque ) after the noon prayer while street vendors waiting to sell headscarf and prayer rug. As the final resting place of the Prophet Muhammad, it is considered the second holiest site in Islam by Muslims (the first being the Masjid al-Haram in Mecca). courtesy istockhphoto.

The Saudi example is no different. Salafism, or the return to a puritanical, literal understanding of Islam, does not thrive because of its mass popularity, but rather because the royal family, essentially controlling Saudi Arabia, pushes this ideology for their own benefit. Moreover, Salafism has been propped up over the years by support from America and Britain, among others, in exchange for access to oil.

As Tariq Ali claims in The Clash of Fundamentalisms, “The Saudi monarch was paid millions of dollars to aid ‘development’ in the kingdom. The regime was recognized to be a confessional despotism, but this unattractive quality was compensated for by the massive oil reserves that it commanded. Saudi Arabia was to become an important bulwark against communism and secular nationalism in the Arab world. Unsurprisingly, the United States safeguarded its own economic and imperial interests and chose to ignore what took place within the borders of the kingdom.”

Those cheering on the supposed rise of atheism in Saudi Arabia are tragically misguided as the state’s problems stem from sources far more complex than citizens’ individual beliefs. As such, systemic change, rather than change focused on individual belief, is required. Saudis becoming atheists will not magically cause this systemic change to occur. Atheists suggesting as much are spreading a fable far more destructive than any of the religious tales they so despise.