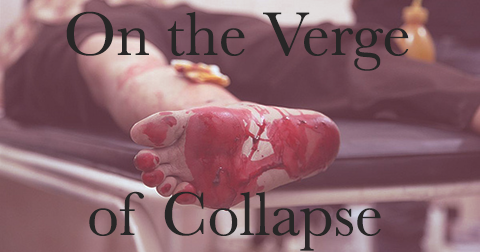 When Dr. Mohammed got the call, he left Syria that night. The feared secret police, or mukhabarat, wanted to ‘talk’ to him. But those who go to ‘talk’ to them, don’t come back.

Mohammed, who asked to remain anonymous, left behind his family and a successful career as a physician in Syria to escape the clutches of the state. His crime: treating the war injured. His patients, well, they’d have to find another doctor.

But finding a new physician won’t be easy. Mohammed is one of an estimated 15,000 doctors who have fled the country. This mass M.D. exodus is straining the nation’s once thriving, self-sufficient health care system and restricting patients’ access to medical services.

“Health care was very good before the revolution,” Mohammed said via e-mail. “Afterwards it became a weapon and mass punishment practiced by the regime to deprive civilians, who support the revolution, from their basic medical services.” 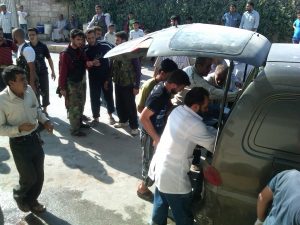 Injured patient being placed in a transport van to Turkey. Hospitals in Syria were not equipped to treat his injuries.

Syria’s hybrid public and private health care sector was self-reliant. My relatives have depended on it for years.

After three years of conflict, though, life for Syrians has drastically changed. More than 100,000 Syrians have been killed and nearly half a million others injured. One third of Syria’s 21 million population are displaced, the equivalent of 120 million Americans. The United Nations reports that the health care system has been devastated.

Red lines, economic sanctions and saber rattling by global leaders have failed the Syrian people. If the parties don’t solve the crisis at the next round of Geneva talks, which is highly probable, they must cooperate to provide humanitarian aid, and revive the health of this once rich nation. And, we the concerned public, must pressure them to do so.

According to Syrian American Medical Society (SAMS), 90% of the local pharmaceutical industry is destroyed. More than a third of the country’s hospitals are demolished and nearly 60 percent have little or no capacity. Also, 78% of ambulances are damaged and 52% are out of service. And, 70% of other medical staff, can not access their workplace.

Polio has returned to Syria after being eliminated for 14 years. The World Health Organization reports a high risk of infectious disease outbreaks due to interruptions in vaccinations, overcrowding in shelters and damage to water and sanitation infrastructures.  Measles vaccinations have fallen to 65%. Typhoid, hepatitis A, and measles are on the rise.

Such diseases, if not contained may be transformed into a global health crisis, spinning out of control in an already tumultuous region, costing the international community, and American taxpayers, billions of dollars.

Working in a War Zone

At least 160 doctors have been killed and 600 others imprisoned. Today in Aleppo, only one surgeon serves a population of an estimated 500,000. Dr. Mohammad worries about his colleagues who have been arrested or kidnapped for ransom.

“It’s safe to be in the areas controlled by the regime but it’s forbidden to give any medical assistance to any civilian injured by its [government’s] military actions,” Mohammed said. “If you do you’ll be considered a traitor and terrorist. If you are in the liberated areas, controlled by the rebels, you’ll be at a higher level of danger than other civilians. Field hospitals are on the top of the military target list for air and ballistic missile strikes.”

According to Zaher Sahloul, president of SAMS, half of all physicians in Syria have fled to neighboring countries, the Gulf and the United States. 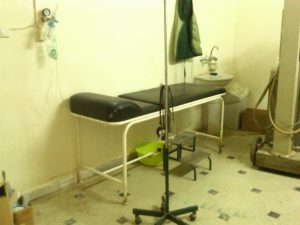 They are not leaving for only security reasons; they’re leaving for money, too. “With the deterioration of the economy and high inflation, people are unable to afford to pay their doctors. Many patients have stopped going to their doctors for routine visits, so many doctors have elected to leave,” said Sahloul.

Doctors Risk Their Lives to Save Lives

Despite the security threats, foreign physicians and NGOs keep returning to Syria to help. The recent case of Abbas Khan underscores how dangerous Syria can be. In November 2012, British doctor, Khan, travelled to the country to treat the injured. He was detained by the regime and a year later, the government pronounced him dead, claiming he hanged himself in his cell.

Such risks did not deter doctor Basem Droubi, a Syrian-American vascular surgeon, from Cleveland, Ohio. He agreed to be smuggled into Syria from Turkey with a group of physicians to work in a makeshift clinic in a rebel-held area. While trying to stabilize his patients in the ER, he could hear bombs falling 200 yards away.

“It was quite a frightening experience,” Droubi recalls. “We had to run down to the shelter in the basement. We [foreign doctors] were panicking but for the other people [Syrians] ,it was casual for them. That was surprising. They’d say ‘Don’t worry Doc, it’s okay.’ But we were scared.”

Despite his fear and scarce provisions, Droubi pressed on. “The emergency room consists of a little stretcher and the cabinet has two or three boxes of sutures and rusty instruments. Its unbelievable,” Droubi said.

The UN is asking for $6.5 billion for emergency relief operations in Syria. The U.S. government has provided a total of $1.3 billion in humanitarian aid since 2011. Non-profit groups and individuals are sending financial and humanitarian relief to Syrian refugees. But is all this enough?

Perhaps. Yes, every penny and suture counts. But the problem is too large and endemic to be covered up with a patchwork of Band-Aid donations and containers of medical supplies. The health care crisis is just the tip of the iceberg. 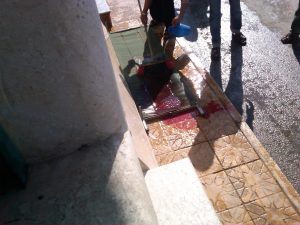 Outside the emergency room, blood is cleaned off the sidewalk.

According to a UN report, human development in Syria has been rolled back 35 years. More than half the population lives in poverty. The economy has lost nearly $90 billion in the past two years. It will take the next 30 years recover these losses.

More must be done.

“We’re talking about biblical numbers of people who are in need,” said Sahloul. “And the American people, unfortunately have not opened their pockets and hearts to the Syrian people the same way they have done to other international disasters.”

When this war ends, and hopefully it will soon, the healing can begin. But the rebuilding will take billions of dollars and stronger political will by a seemingly reluctant world leadership.

Certainly the American people’s hearts are big enough to include the Syrian people, my people and my relatives, too. Part of the problem, I must admit, lies with my own heart; and perhaps the many silent others, who want peace, security and normalcy for Syria, but are afraid to speak up or just don’t know how to help.

Citizens, like myself, must not only open our pockets but also pressure our elected officials to take more proactive policies to help Syrian populations and protect Syrian doctors and hospitals. Reports by international organizations do help. Press releases and aid packages by the NGOs also make some difference. And yes, this conflict is immense and complicated on so many levels.

Before and after the upcoming Geneva II peace talks, we, the silent public, must raise our voices about the plight of the Syrian people, and particularly their health care crisis. We must pressure our leaders now, to take action to help prevent further disease and more bloodshed, later.