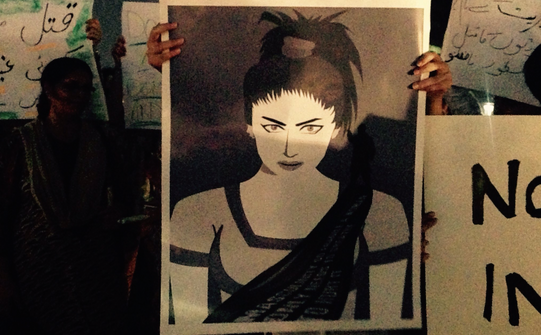 The Truth About Honor Killings

In mid-July, Pakistani social media star Qandeel Baloch was killed in her home for allegedly disgracing her family, faith and country. An outspoken advocate for women’s rights, the 26-year-old Baloch — whose real name was Fauzia Azeem — used the online space to condemn and castigate the patriarchy of Pakistan.

Drugged and strangled by her brother, Waseem Azeem, who expressed no regret, the young woman’s death reignited an age-old debate in Pakistan about the quiet acceptance of honor killing, deemed a just punishment for girls and women accused of shaming the men in their family. In 2015, nearly 1,100 girls and women were victims of honor killings by their relatives, only slighter more than the number of women who died in honor-related deaths the year before, according to a Human Rights Commission report. “The predominant causes of these killings in 2015 were domestic disputes, alleged illicit relations and exercising the right of choice in marriage,” the report said. For some men, justification for an honor killing is as simple as disagreeing with a female family member.

Honor killing, or honor violence, is a real phenomenon that claims the lives of thousands of girls and women worldwide for disobeying their families, traditions and/or cultural values. Often, male perpetrators of honor killings are not prosecuted, particularly in Muslim-dominated countries that side with male oppressors. In Baloch’s case, the police arrested her brother days after her brutal death.

The police found Waseem in the city of Multan in the Punjab province. In a public confession, he said, “Girls are born only to stay at home and to bring honor to the family.” Waseem and his supporters had criticized his sister for what they perceive as her indecent and indecorous behavior online, but the bold and brash Baloch remained true to herself when she sported short dresses and/or tight clothing to call attention to herself.

Earlier this year, Baloch nearly set off a scandal when she promised to post a video of her stripping if Pakistan won a cricket match with India. Luckily for Baloch, Pakistan lost, averting controversy and further “slut-shaming.” However, before the match, Baloch posted teasers of her strip show on Facebook, gyrating her hips in a swimsuit under a loosely tied bathrobe, exposing more skin than most Pakistani models do in a lifetime. After the release of the teaser, Baloch’s popularity skyrocketed and her exhibitionism boosted her Facebook following to almost 750,000. 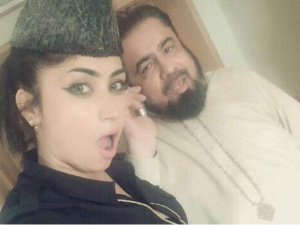 Even in full clothing, Baloch knew how to attract a large following. Last summer, she posted a 22-second video on Facebook in which she addressed a middle-aged man. In her self-absorbed way, wearing a colorful top and bumblebee sunglasses, Baloch fetches for a compliment from the man and continues to ask him how she looks until she agrees with his response. “Extraordinary,” he says. That video received nearly a quarter of a million views, and follow-on postings of Baloch turned a girl from a poor family in tribal Pakistan into a media darling. Arguably, one of the most obscene and obnoxious video postings included Baloch flirting with a religious figure, Mufti Abdul Qavi. Weeks before her death, she posted a selfie of her  wearing the Muslim cleric’s hat and posing next to him. After the photo went public, the cleric lost his privilege to be a member of the “moon-sighting committee.” Police are investigating whether the cleric had a role in the young woman’s death, something that he denies. Baloch’s “life was her own business, and killing someone is haram [forbidden in Islam],” Mufti Naeem, a conservative and vocal religious leader, said publicly, condemning the killing.

After her death, international media portrayed Baloch as a gender-rights activist. Her own victimhood — Baloch was forced into an arranged marriage to an abusive man at 17 and then left her husband and had to give up custody of her son — had given her the right to challenge the patriarchal and patrilineal traditions that define Pakistan today. But Baloch, in her attempt to speak for women’s empowerment, underestimated her country’s acceptance of free speech, freedom of mobility and freedom of expression for women like her, and sparked an internal debate about what a woman can and cannot do. Pakistan, as is true of many other Islamic countries, is not the place for a woman to present herself in a manner that is perceived to be self-flattery and self-promotion — at least not yet.

While Baloch raised controversial issues such as sexual violence against women, she used Facebook, Twitter and Instagram to strut herself. And it is this braggadocio of flirting with the camera to ridicule Pakistan’s men — some of whom deserved to be discredited for their mistreatment of women — that had Baloch receiving death threats and being shunned by men and some women, who disagreed with the objectification of a woman’s body to bring awareness to the issues of gender inequality and women empowerment. To this point, in an interview in April on Pakistani television, Baloch told viewers that, as a child, she was always bold and “hot and sexy,” a descriptor for which she is unapologetic and unwavering. When she was alive, Baloch defended her position, claiming to be a respectable young woman, and on occasion, named the tribe to which she belonged and the traditions of her family, which dictate that she be an honorable woman.

Not everyone agreed. Conservative Pakistanis considered her vulgar. Many liberal elites found Baloch childish and viewed her as an attention-seeker. Her followers called her Pakistan’s Kim Kardashian, an American reality star and cultural icon obsessed with snapping selfies and using her body as “a source of empowerment.” Baloch would likely have agreed with Karadashian, who defended her decision to share a nude photograph of herself, saying, “I am empowered by my sexuality. I am empowered by feeling comfortable in my skin.” In the same spirit, Baloch said she was freeing girls in Pakistan when she lived her own life. During vigils in the cities of Lahore and Karachi, women blamed the media for turning Baloch into a tabloid and argued for the right of women to live without patriarchal expectations. In her final interview, Baloch told Pakistan’s Dawn newspaper that she wanted “to become something, to be able to stand on my own two feet.”

Now that she’s gone, Baloch missed an opportunity to advance women’s rights by appealing to a wider audience. Being a smutty superstar was not a call to action, but the young woman’s death did reignite an age-old argument made by women before her that the ancient practice of killing women for the sake of so-called honor is unIslamic and inhumane. Because of Baloch, the Pakistani government, including the prime minister and his daughter, have promised to introduce a bill that would ban and punish the perpetrators of honor killings with the hope that men will rethink their actions before murdering another woman.