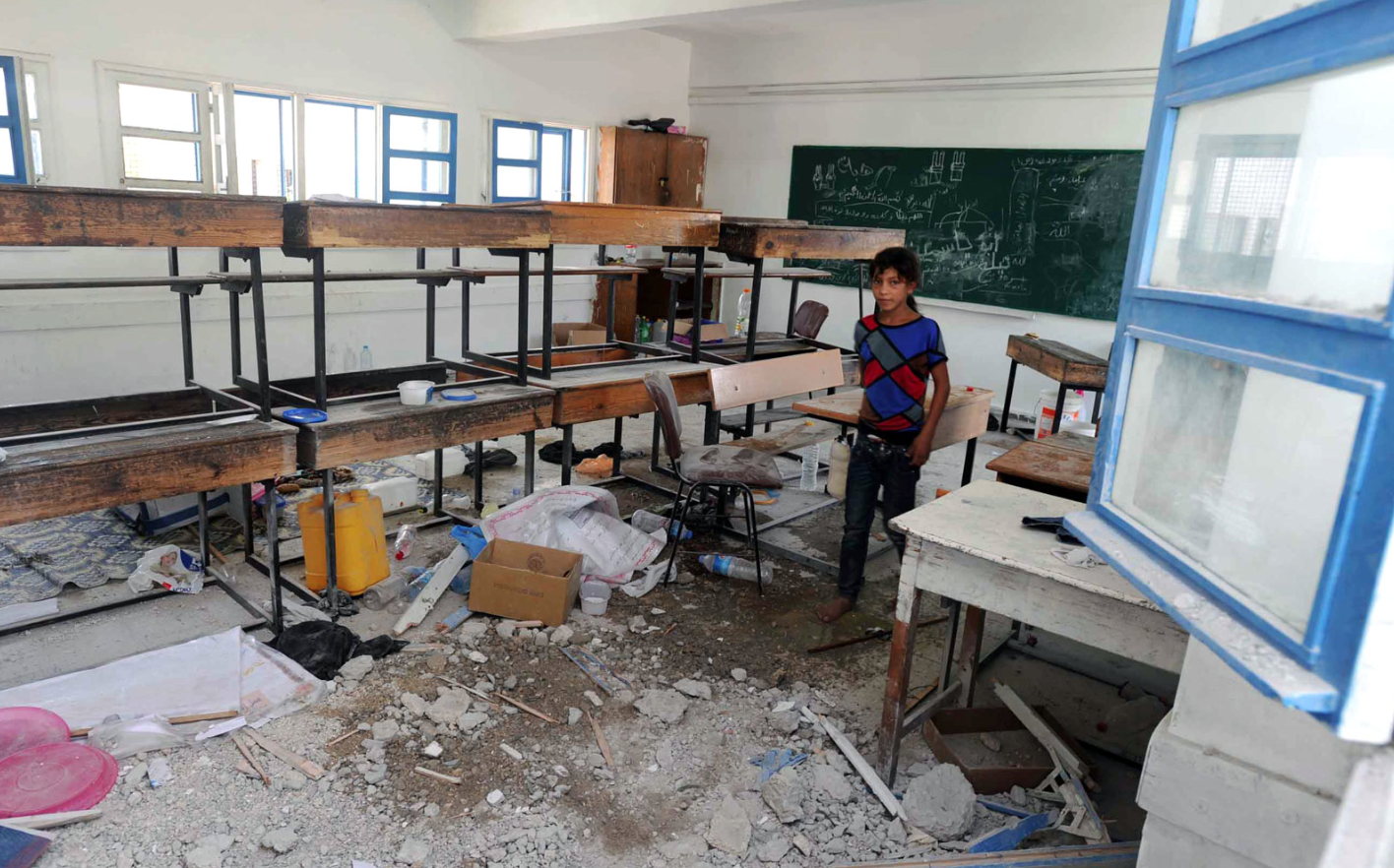 Ninety displaced people, on average, sleep in classrooms like this one that was struck by Israeli artillery shells. © Shareef Sarhan/UNRWA Archives

UNRWA Spokesman to TIM on Gaza: Infrastructure and Investigations

Gaza: On Infrastructure and Investigations 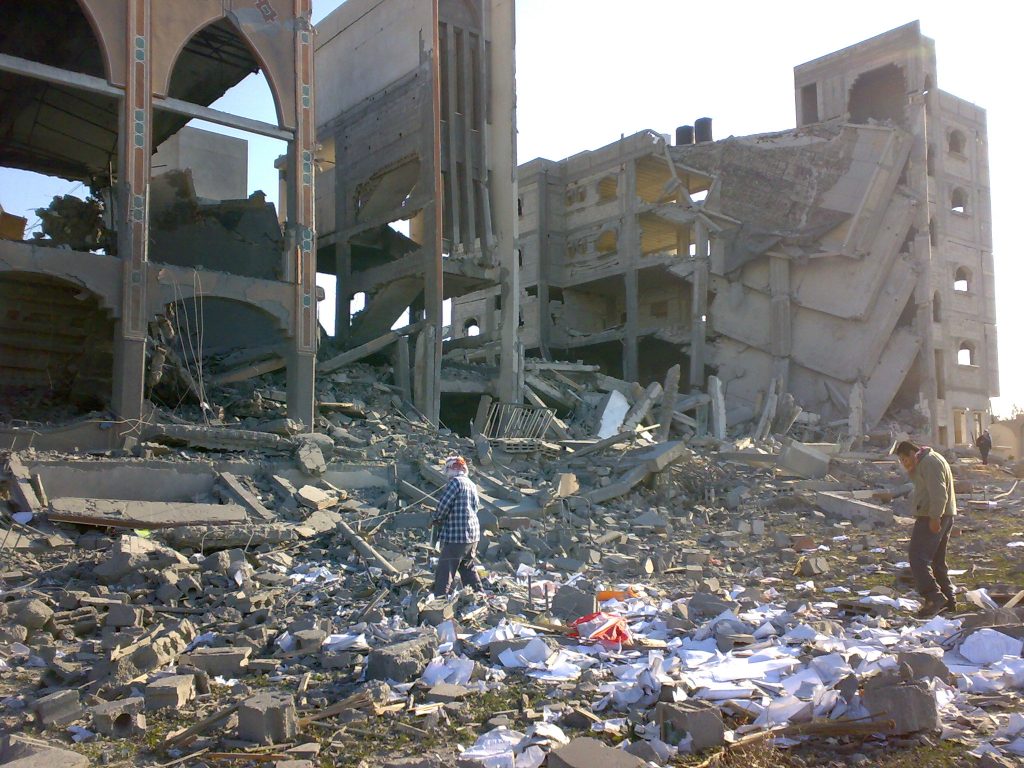 The following was edited from an interview between Christopher Gunness and Amina Chaudary of TIM.

We have 200,000 people in about 90 shelters who have been there for weeks now.  The conditions in the shelter are deteriorating. We are doing our best to provide adequate sanitation, food and water, but these are schools that were meant to house 1000 children coming in the morning and leaving in the afternoon. They were not designed for three to four thousand people 24/7.   So you can imagine things are not ideal in them.  We were hoping that people could leave to go back to their homes in times of relative peace but people are coming back because their houses are not habitable.  We have a long-term homelessness problem.

Many of the houses will have to be rebuilt, including the water, sewage and electricity systems which have been destroyed or dramatically damaged.  There is a massive problem with reconstruction.

People are going back and finding their homes destroyed. If you are a child or family and you lost your home, you’ve lost your past and your present. Imagine your home suddenly wipes out, all of your memories, all of your heirlooms, family photographs, everything that makes you who you are has suddenly been taken away.  And that leads of course to huge psycho-social problems. 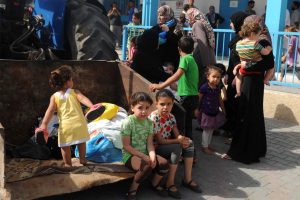 The schools were to open on the 24th of August.  The education of course is now on hold.

So, the humanitarian picture of Gaza today is absolutely catastrophic and getting worse.

The war is not over.   Sending out teams of engineers to survey to see what has to be done in terms of rubble removal and see how bad the water and electricity systems are can’t even begin until there is a proper ceasefire.  There are problems of structure to buildings, many that need to be collapsed.  There is a whole range of problems but we have not been able to start that probably yet.  We are hoping in the next couple of weeks to finalize a reconstruction plan.

On Materials and Aid Getting in and Redevelopment

As far as stuff that we need, we get in what we need to get in. Israeli authorities realize with the conflict and what is happening inside Gaza that civilians have suffered enough and that there is no justification for preventing [aid] going in.  But when the fighting is over, there has to be consideration given to lift the blockade. We cannot carry on a reconstruction to Gaza with our hands tied behind our backs.

About the Rafah crossing, that is for people it is not for goods. I have been through it. It is a very narrow road going in and a very narrow road going out.  From an industrial scale international assistance does not come in and out of Rafah.  It is unrealistic to expect two million people to survive on what comes in and out of the Rafah crossings.   That is for people.  Of course we say that the Rafah crossing must be opened, there must be proper humanitarian access, but the prime responsibility is with the occupying power: Israel.   It is very clear what needs to go in and a lot more needs to get in to Gaza.

But also, stuff needs to get out.  When I talk about the blockade everyone thinks it is about what Israel allows in.  But Gaza also needs to export and its natural export market is the West Bank.  When I say lifting the blockade, I don’t just mean allowing a few more trucks to enter in to Gaza, I am talking about allowing the economy of Gaza to develop, to create wealth, to create jobs, to create disposable incomes: all the things which non-aid dependent societies need.  The trade restrictions, particularly the export ban in Gaza, [must be] lifted.  There are plenty of governments in the world who have lined up to give money for security systems that see to Israel’s security but would allow exports to take place. There are governments who will supply the necessary security arrangements to allow exports in Gaza to happen, we just need to make it happen.

For example, European governments created a thing called the Karni crossing which was an industrial scale shipment point with 30 lanes for container trucks to go in and out.  And there was a system there for security.  And for reasons that I don’t understand, you’ll have to ask the Israeli authorities, they closed it down.

On the Jabaliya school

It’s not complicated with how we reach out to the Israeli army, we picked up the phone and said to them [17 times] could you please stop the firing it’s getting close and there are loads and loads of people in our schools.

On Conversing with Israel Authority and Hamas

We have humanitarian conversations about protection of civilians and provision of goods and services to civilians.  You don’t have to be a rocket scientist to know that on the Israeli side, we’ve raised with them puzzlement and indignation about how our schools were hit.  With Hamas, they are the de-facto authority in Gaza.  The UN has a contact policy and that says that UN bodies and agencies are allowed to have contact with Hamas up to and including the level [needed] in order to implement humanitarian mandates. So of course we have conversations with Hamas to implement our humanitarian mandates. But it is nothing shocking.  Everyone knows, including Israelis, that we are having these conversations.  If we are going to say deliver some medicines to hospitals that are run by the ministry of health, then we have to phone up the hospital, we have to take out of storage, make sure the gates are open, etc.  and there is no reason why no one will expect us to not do that.

On Investigations on Rocket Fires from UN Schools 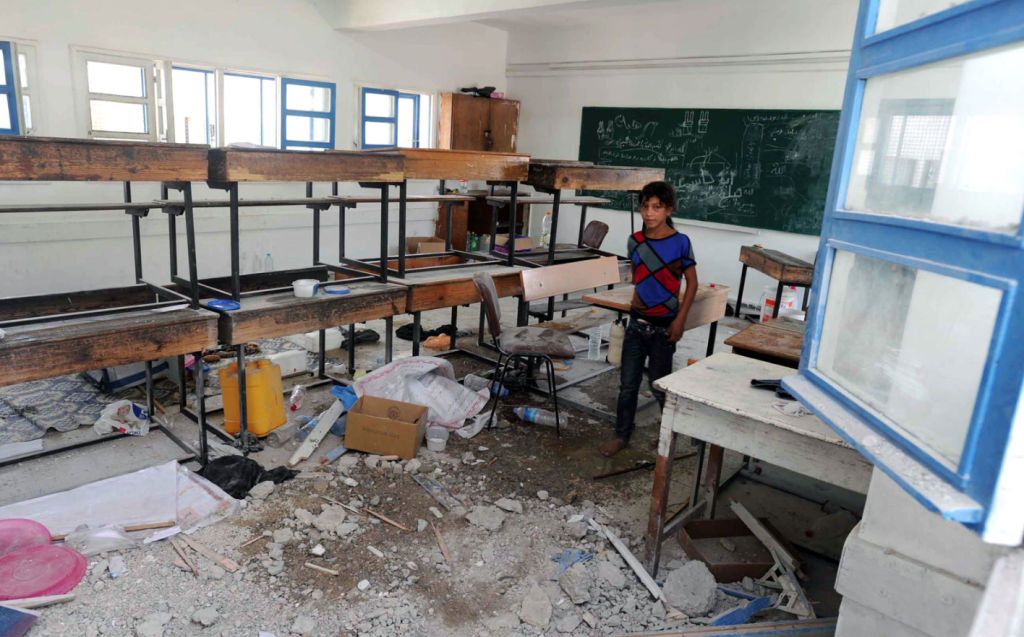 Ninety displaced people, on average, sleep in classrooms like this one that was struck by Israeli artillery shells.
© Shareef Sarhan/UNRWA Archives

About the investigation, we are a member state organization, the UN, we’ve done our part and done site inspections and done analysis, trajectory analysis.  We examined the shrapnel that was on the streets and the damage and we were able on the basis of that to make the determination that it was Israeli shells that hit our schools.   There is no doubt about that.  The question is over intentionality.  We need to find that out, because when you have a situation when people are grieving, you can’t begin to grieve unless you know the truth.   So it’s a matter of justice and accountability that we should know who is responsible and why this happened. But it is also a psychological truth for us that we need to know exactly what happened if you are going to move on and grieve.   We need to put victims of these terrible incidents at the center of our thoughts and efforts.  That is why we need an investigation.

We look forward to seeing what the Israeli government produces. But there are other investigations like the Human Rights Council that has mandated an inquiry to establish the truth about what happened. It is a broad mandate that I think includes accusations that militants were near UNRWA property or UNRWA schools.  But that is not a reason to justify why they hit them.

The UN Council has also called upon Swiss government to convene a meeting of the high contracting parties of the Fourth Geneva Convention to look at what happened (the convention is the contractual obligation for the protection of civilians during a time of war).  The Human Rights Council has also mandated all the thematic rapporteur like on water, etc. and will report on what’s happening in Gaza. The processes on getting in to accountability and transparency have been set up. We have to wait and watch them do their work and see what comes out of it.

It is not true that we have handed rockets over to Hamas. I cant characterize the public sentiment of what he did or said, but there is an article, article 100 of the UN Charter, which forbids political interference by any member state in the running of the UN, and Ron would need to look and see if there has been a violation.

The most important point is that UNRWA is a neutral humanitarian organization and threats to our neutrality like the ambassador calling for me to be sacked doesn’t help to do our work and hinders the work that we are doing. We are neutral but need the help of all parties to help us maintain our neutrality.