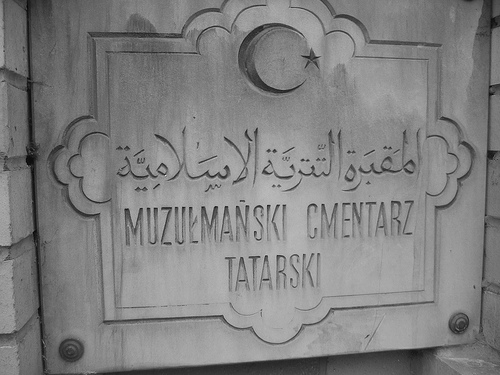 Pinch-Hitters for the Caliphate: Reading Samuel Huntington in the Crimea

They’re settlers.  That’s a loaded term, and I know how heavily it weighs on the virtual page.  But that’s what they are, so

why beat around the post-Bush era?  When you hear that Russia has intervened in the Crimean Peninsula on behalf of a fraternal population, I hope you can keep in mind that many of these filial folks are frustratingly recent arrivals.  Brought in to replace a population that has spent the last few centuries getting driven out, and the last two decades trying to making sure it doesn’t happen to them again.   What I’m saying: Russia has no natural right to the Crimea—at least not without factoring in the 12% of the peninsula that is Muslim.

A proportion that used to be a lot higher.

And a population that wants, like many other Ukrainians, to be free of Russian bullying. 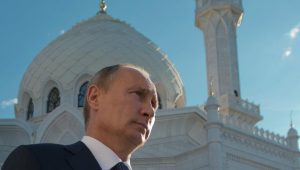 Except you know, as they say, that one of the problems with history is that, like Friday sermons, it has a tendency to not just repeat itself, but to scream the same ideas across the planet again and again.

In 2011, Turkish warships were anchored off the Libyan coastline, participating in NATO’s support of a democratic uprising in that country.  Exactly one hundred years before, or 1911 for those of us who don’t want to do the math, the Italians drove the Ottomans—including a young Mustafa Kamal [Ataturk]—out of their province.  The Ottoman crescent is back on Libya’s flag.  And NATO includes Turkey and Italy.  Who would’ve seen that coming?

One hundred years ago, the Ottoman navy—with considerably German support—sailed north through the Black Sea and commenced shelling Russian fortifications.  The more things change, the more they Caliphate.  Today Turkey rightly opposes Russian support for a brutal dictatorship in Syria, which has reserved its greatest enormities for the majority Sunni population, while across Turkey’s northern border, fellow Turkic Sunni Tatars are likely going to be on the receiving end of Putin’s irredentism and invasion and interference.  Side point: Though Turkey’s even farther from the EU than ever, Russia’s behavior is likely to cement Turkey’s importance to the West.  That is, assuming the West’s great postwar security architecture is not being ripped apart at the root.

During the Sochi Olympics, you heard very little about who used to Sochi.  I’m trying to make sure that doesn’t happen again.  (Incidentally, what is it with Russia and the Olympics?  Every four year, a neighbor gets invaded just as the medals begin to rack up.)  The end of the Cold War has sparked a lot of hot, small, bloody spats: from the Former Yugoslavia to Chechnya to the Ukraine.  Which is not limited to, but cannot be riven of, its Muslim population, part of a mitteleurope Tatar community that gets short and shrift.  There happen to be Tatar legacies of some significance in Poland and Lithuania—which countries are especially alarmed by Russia’s invasion.  So critical were these Muslims to the former two that, in 1683, the Ottomans were held from seizing Vienna by the timely arrival of Muslim troops from the other side.  Clash of civilizations?  Ha.

Just as absurd centuries ago as it is today, when once again Slavic Christians and Tatar Muslims happen to be on the same side—with Slavic Christians and other kinds of Muslims on the other side.  Who are Putin’s principal Muslim allies anyway?  Bashar al-Assad and the Egyptian General whose name, Sisi, rivals only Islam Karimov’s for comic value.  If we’re going to give in to crude ideological frameworks, we might step back from, I don’t know, a one-year long period of analysis and note how often Russia and the West have clashed, with Muslims split down the middle, pounded all across—hello, Chechnya, this is called aerial flattening—or taking the American side of the conflict.  If you take anything from that, it’s that power politics doesn’t respect the kind of awkwardness that leaves people staring at maps and wishing the world would conform to their preconceived or hoped-for boundaries. 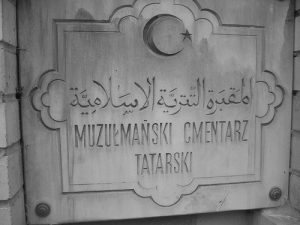 The Crimea was once majority-Muslim; the diamondish peninsula on the north shore of the Black Sea was home to a longstanding Turkic Khanate, established in 1441 as an independent power, subsequently turned into an Ottoman vassal state, and ultimately absorbed into Czarist Russia between 1774 and 1783.  (Around the same time, for comparison’s sake, we Americans were fighting for our independence.)   According to some historians, the relationship between Crimean (“Qyrym”) Tatars and the House of Usman was so close that, in the event the latter produced no male heir, one would be overnighted via premodern Islamist Post posthaste to Constantinople.  In other words, they were pinch-hitters for the Caliphate.  Now they’re partisans for democracy.

But not the Treaty of Paris.

Which is also when these Tatars became part of a rapidly growing Muslim population within a rapidly growing Russia.  For example, the Volga Bulgarian state centered on Kazan, which became another Tatarstan some centuries later, had fallen under Russian rule by the 16th century.  Michael Crichton reimagines the story in Eaters of the Dead; the film version, 13th Warrior, features Antonio Banderas.  The two Tatar populations, between Crimea and Tatarstan, were not just religiously similar, but ethnically akin, and facing similar political circumstances.  (Complicating things for modern Russia, as I’ll later address.)  Under Russian rule, for example, the Crimea was gradually de-Islamized.  As in removed of Muslims.  This follows in a general trend of genocide, expulsion, ethnic cleansing and deportation, by which the Czars and then the Soviet Union rid themselves of pesky minorities who refused to accept foreign imposition.

The storyline continues after the fall of Communism, for the alienness of the occupation remains.  So don’t believe the fraternal hype.  Yes, Russia has supporters in the Crimea, but they are not the only Crimeans who need to be on our radar.  The Crimea’s Muslim population was repeatedly and harshly culled; in 1944, for example, at the same time as 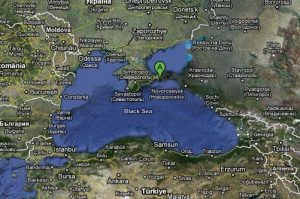 Chechens were put onto trains—what does that remind you of—and dropped off in Central Asia, the Tatars of Crimea were subjected to the same inhumane treatment.  Stalin.  And yet we’re hearing ridiculous propaganda warning of “Nazis” in Kiev.  Ethnic Russians took the Tatars’ chairs.  Although they have been allowed to return since 1991 and the collapse of the USSR (good riddance), the Tatars are only 12% of the Crimea’s population—although, as this Slate essay by points out, they’re growing in proportion to ethnic Russians.

The same holds, indeed, for Islam across Russia; Muslims have higher birthrates—while non-Muslim Russians have dramatically low birthrates.  Some academics have argued the rapid growth of even nominally Muslim Soviets may have been a cause of that state’s demise.

Moscow, for example, has millions of Muslims.  And four mosques.

Russia doesn’t know how to deal with its Muslims, and its occupation of the Crimea may just make all that worse.

Now that a Russian military force has arrived in the Crimea, Russia may seek to make permanent that peninsula’s detachment from the Ukraine.  But, according to Timothy Snyder, not only did Ukrainian Muslims—of whom Tatars are a significant percentage—play a critical role in the Euromaidan uprising (hell, the word itself comes from the Arabic for “the Square” and not the documentary), but a Muslim may have sparked the protests themselves, followed up by Afghan veterans showing up to back him up.  How are these Tatars going to feel about returning to Russian rule?  And should we expect the typical ahistorical conversations about extremism and radicalism?  As Timothy Snyder puts it, the 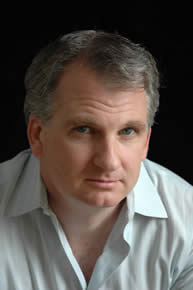 diversity and true democracy of Euromaidan is astonishing—and humbling:

Has it ever before happened that people associated with Ukrainian, Russian, Belarusian, Armenian, Polish, and Jewish culture have died in a revolution that was started by a Muslim? Can we who pride ourselves in our diversity and tolerance think of anything remotely similar in our own histories?

I’m not sure what we’ll take away from all this, other than: (1) we have here a Muslim and European population that is clearly in favor of more European integration and democracy (ahem Islamophobia while coughing), (2) the Crimean Tatars are not too distantly related to the majority-population of Tatarstan, a wealthy and sometimes restless region of central Russia, and that we can appreciate (3) the likelihood of Muslims ending up, yet again, on the wrong side of the Russian state.  It isn’t terribly hard to imagine how this could go so very wrong.  Just in case one day this turns into a crap narrative, of the kind we heard during the Olympics—all about terrorism, and nothing about the far greater violence Caucasian Muslims were so very recently subjected to—at least someone said it.  Me.

This should also give the lie to Islamophobia’s sinister twin, which suggests that Muslims are always on the receiving end of Western violence.  In this case, Crimea’s Tatars want to be part of the Ukraine, and more closely allied to the West; just across the Black Sea, they have ethnic and religious kin in the Turkish Republic, which is a longstanding NATO member.  Talk of insurgency or uprising is perhaps very premature, and hopefully nothing but chatter.  But we are forced to see that simplistic religious boundaries do not hold, that alliances are far more fluid and surprising than we expect, and that, most disappointingly of all, the same President who failed to stand up for democracy in the weeks, months and now years since the Arab Spring, is doing a perfectly good job at failing a European and largely Christian country with a significant Muslim (and Jewish) minority in its own democratization struggle.

Comparisons between Russia’s intervention and America’s in Iraq might be useful in establishing a common hypocrisy, but two wrongs do not make a right.  Never have.  Never will.  What happens next matters, and maybe more for us, as Americans, than anything in the Middle East.

What’s the West worth when the West itself doesn’t stand up for it?

When the people who knock on our doors will hear only the sound of our bolting the latches?

I guess they’ll be on their own.

For the Tatars, at least, we know: They’ve been through far worse.