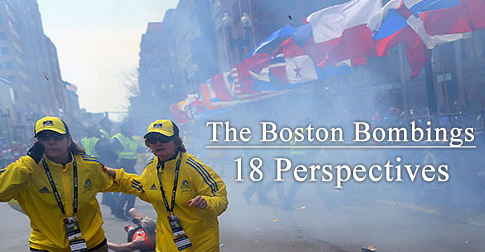 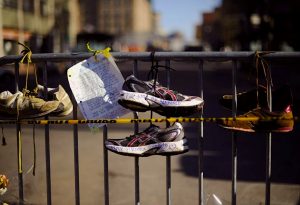 Over the past week, as much as there has been coverage of the Boston Marathon bombings and the following Watertown manhunt for the alleged suspects, the Tsarnaev brothers, there has been an equal amount of discussion and focus on the role of the media and the state of journalism in covering incidents of violence. In particular, there has been focus on how race, ethnicity and religion play into the creation of narratives and how, in turn, certain labels and character sketches are created to pull our collective imaginations and fears along. The Islamic Monthly decided to put out a call on social media websites to you, the consumers of news, to give us your perspectives on what you witnessed last week through the lens of a concerned, involved viewer.

1. As the Dust Settles

Now that the dust has settled and the citizens of Boston and Massachusetts can breathe with a little more ease, it’s time for some reflection and a good old history lesson. The capture and killing of alleged “Boston Bombers”, brothers Dzhokar and Tamerlan Tsarnaev, has once again highlighted the struggle for the civil rights of Muslim Americans-specifically Muslims in Boston. Immediately following the attacks on the Boston Marathon, the response of the Muslim community in Boston was to help organize and participate in vigils and interfaith services for the victims across the city. The community’s history of being viewed with suspicion forced it to engage local leaders of other faiths, working to separate the actions of a few from a large and diverse group.

In 2005, Massachusetts governor Mitt Romney suggested wiretapping mosques and conducting surveillance of foreign students in the state. Similar calls continue to be made today. Years of cooperation with law enforcement officials did not stop Muslims participating in the marathon, present in the audience, and injured in the attacks from being interviewed as potential suspects with little to suspect involvement other than presence, religion, and skin tone. Almost ironically, the Tsarnaevs are ethnic Chechens and thus Caucasian.

The Boston FBI office has a long history of intimidation of those who are devout or with alternative views in the local Muslim community. One such case of intimidation and false accusation lead to the imprisonment of 29 year-old Tariq Mehanna. Mehanna currently sits in federal prison serving a 17 year sentence, found guilty on charges of aiding and abetting overseas terrorism for translation of material deemed subversive. In a statement following Mehanna’s sentencing, the Massachusetts director of the ACLU, Carol Rose said, “The ACLU of Massachusetts is gravely concerned that today’s verdict against Tarek Mehanna undermines the First Amendment and threatens national security.

For years prior to Mehanna’s case the FBI spied on him through his own friends, using them to potentially entrap him. Mehanna’s problems began after visiting Yemen in 2004. The government accused him of attempting to join a terrorist training camp-something it was never able to prove. Mehanna has stated that the FBI tried to entrap him and even tried to recruit him to spy on others. The star witness for the government was one of Mehanna’s associates and coreligionist, himself having been forced by the FBI to record what Mehanna and others were saying.

Already, Dzhokhar has been denied his Miranda Rights being read to him on the grounds of “public security”. It remains to be seen whether or not the case of the Tsarnaev brothers involved other violations of their civil liberties.

For now, it’s safe to say that the Boston Muslim community’s cooperation has bared little to no fruit. And that’s not likely to change any time soon.

As this bizarre story picked up, many viewed it as a microcosm of the rivalry between old and new-media: everyone was struggling to break the news first. Twitter and Reddit exploded with live updates from the scene, photos, tangible background info, and even historical facts about the marathon. Yet the stream of factual updates and media coming out of Boston was combined with endless misinformation; suspect names, false religious and ethnic ties, and even baseless numbers of casualties and injuries. Baseless stories were amplified into global trending topics and mainstream discussions. The NY Post wrongfully fingered an innocent “Saudi person of interest” and cable and Twitter made it go viral. Redditors pushed the theory that a missing Brown student was one of the bombers, streamlining it into social media and MSM. The name of an injured Saudi medical student was circulated so heavily on the web that people started contacting the wrong namesake in Geneva. Even non-profit news organizations that were once renowned for their reliability such as the AP incorrectly reported on Wednesday that a Boston Marathon suspect had been arrested.

Because of our obsession with breaking news, we gave these stories power, and inadvertently damaged the reputations of both students. Not to mention the uninvited media spotlight that came their way, and the stress affiliated with it. How will they deal with the uninvited attention? Will this hurt their career prospects? Will they be victims of hate crimes? Will this hurt the search efforts for the missing Brown students? I don’t know. I just know that these questions could have been easily avoided with more cautious news reporting.

Maybe our current technologies are getting us too caught up in these stories. Maybe we should demand less breaking, and more factual news.

3. Media Distractions or Reflections of Our Response?

I’m surprised that there wasn’t more “Al Qaeda did it” type speculation than what has actually occurred so far, as this type of bombing seems an obvious draw for that sort of thing.  Many of the media responses do fit the typical pattern of over reporting some single dramatic event (shooting, single murder, etc.), and attempting to report some sort of story to go along with it, even if the details don’t exist to support one.  As usual with these sorts of events, I find it surprising that this one is getting as much attention as it is, when other events (Gun Control laws, Oil spill, and Oil Pipeline fights in particular) are occurring at the same time, have much more information to talk about, and will almost certainly effect far more people than the single bombing where little is known.

I’m not sure how much these tendencies are a deliberate media decision, vs. a reflection of how most people would respond anyway.  How exactly the Boston explosions will play out is something I’ll have to see, but I do worry when, say, attention and policy seem to focus on some issue only when a major event occurs (Mass shootings in the case of gun control are the most recent), and how much may be going on without my knowledge, that I may have an interest in.  Not having worked in a media system, I’m not sure how consciously planned the focus on Chechnya as a connection, or the “dark skinned male” type comments are, but either way it seems strange and worrying that either someone would want to deliberately push that angle of the story, or cannot report events properly due to a strong instinct to tell a pre-programmed story.

The US media failed badly in its coverage of the Boston Marathon bombings: reporting was not only riddled with errors, it was tinged with ill-concealed racism and ethnocentrism.  From the New York Post’s Monday afternoon story that authorities had arrested a Saudi national (actually a witness); to CNN’s report on Wednesday that a “dark-skinned male” had been identified as a suspect (no such suspect existed); to Thursday, when the FBI finally released pictures of the two suspects and CNN pored suspiciously over the photos, uncertain whether the suspects looked American: in all of these cases, the media cast terrorism suspects as non-white foreign nationals, and some even tied the crimes in Boston to al-Qaeda, trying to further emphasize the non-white, non-Western origins of terrorism.  But it turned out that the people who allegedly planted the bombs were in fact Caucasians—from the Caucasus, even!—and although they did not grow up solely in the US, they are both US citizens.  Their stories are far more complex than the media would like us to believe; they do not easily fit into foreign or domestic or white or non-white boxes.  And we must recognize that our knee-jerk tendency to oversimplify stories about terrorism damages our ability to understand it.

Why, when the vast majority of terrorist incidents in the US are actually committed by white US citizens, does the US media so readily engage narratives of terrorists as non-white foreign nationals?  How does it serve us to seek the source of homegrown terrorism elsewhere?  And when discussing terrorism of non-US origin, why does the US so rarely explore what motivates it—why do we never seem to go deeper than Dan Rather’s fatuous “they hate us for our freedoms?” When will we stop ignoring the effects of US foreign policy, which helped to arm those who blew up the twin towers, which ceaselessly exploits other countries and peoples for their resources, and which inflames anti-US sentiment with drone strikes in places like Pakistan and Yemen?  If the US wants to reduce the likelihood of terrorism, it must first understand how the actions of the US government foster resentment and then seek to mitigate it, and to start that process, we must abandon the trite fables we so readily use to construct terrorists as fundamentally different from ourselves.  Or, we can continue to paint terrorism as foreign, as non-Western, as Other, and cement in place the idea that we do not need to ask why people might commit such acts, and preclude the possibility that we might ever stop them.

My family and I were fixated in front of the television for over five hours, following media coverage of the Dzhokhar Tsarnaev manhunt. There are many things that are perplexing. For example, the media pointed to Dzhokhar’s tweets as illustrating “unease and discontent,” pointing to a tweet which read “I don’t know why it’s hard for many of you to accept that 9/11 was an inside job, I mean I guess fuck the facts y’all are some real #patriots #gethip.” He’s not the first or the last person to have doubts 9/11. Tweets like this are hardly proof for illustrating that he harbored terrorist leanings.

What upsets me the most is that we are never given access to the footage serving as the determining factor in identifying these suspects. We are never shown the suspects putting down the explosive packages [conclusively]. We thus are compelled to accept, without question, the FBI’s determination that these two boys are responsible.

I think what the Boston media coverage highlighted overall, is the need to take a step back and engage in responsible and ethical journalism, be it on mass media or social media. Time for analysis and gathering facts and reporting accurate information is the need of the hour, not per second updates. For those on social media, it is just as important to verify sources and think before sharing information. In volatile situations such as these, incorrect information can lead to situations that can quickly get out of control.