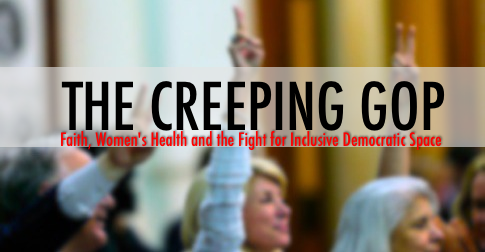 On June 25th, State Senator Wendy Davis became a nationally and internationally recognized hero for standing up at the Texas Senate and filibustering her way through Texas Senate Bill 5 (SB5), an anti-abortion bill which imposed severe regulations on abortion clinics in Texas, permitting only five to continue operating in the second largest US state and criminalizing abortion after 20 weeks. This bill failed to pass at the filibuster, but was quickly reintroduced in another special session as House Bill 2 (HB2). Friday, July 12, was the last night of the special session, where the Texas State Senate debated and passed the atrocious bill. 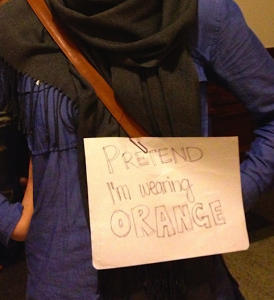 Over the past few weeks, I have gone to the Texas Capitol twice: the first time was as a last minute decision to attend the anti-abortion filibuster, and second, just last Friday, was in solidarity with others who were attending in support of choice.

On the night of the filibuster, I had just arrived in Austin, and my friend suggested that we go straight from the airport. I was so ill-prepared that I showed up at the Capitol in a blue shirt, the color of the so-called ‘pro-life’ activists. Lest anyone assumed that I was another anti-choice activist -and a Muslim one no less- I quickly created a sign reading “PRETEND I’M WEARING ORANGE.” I wanted to make sure people didn’t conflate my blue outfit with Christian-centric religious arguments.

I didn’t need any #creepingsharia tweets with my picture on them.

Although some are pro-life, Muslims are not unequivocally against abortion the same way Christians can be. There is a difference of opinion in the permissibility of the abortion. For example, in cases where the woman’s life is in danger or she has been raped, many jurists will recommend an abortion, or even say it’s mandatory.

Regardless, for me, the bill wasn’t a religious issue. It was about a health issue, dangerously shrouded in religious rhetoric. Preventing safe abortions won’t decrease the number of abortions in Texas—it’d only limit the accessibility of safe clinics to desperate women. It’s not a safeguard against abortions in the state. But the conservative senate was too wrapped up in its own religious beliefs to understand this.

SB5 failed that night, and while we briefly celebrated our success, our state of euphoria dissipated quickly when Governor Rick Perry initiated an extended special session. Too long for anyone to filibuster, the bill would surely pass this time.

I found myself there again, two weeks later, getting ready to go back to the Capitol. It was the first Friday night of Ramadan and I had been fasting all day–no food, no water, from dawn till dusk. With almost no food in the house, I scrambled to make myself a bread and butter sandwich and grabbed half a muffin with which I would break my fast. A friend picked me up at around 8pm, almost an hour before I would be able to break my fast. I was prepared this time, in an orange scarf and dress that I had borrowed from my roommate.

When we got to the Capitol, officers from the Department of Public Security searched our bags, and we walked through a metal detector. One officer took my bag and pulled out my puny sandwich, wrapped in tinfoil.

“It’s a sandwich–I need it to break my fast.”

And with that, he walked around the security area and tossed my sandwich in the garbage. I was stunned, too weak from fasting to do anything. My friend, however, was livid. “What are you doing?! You could have let us taken it out.” 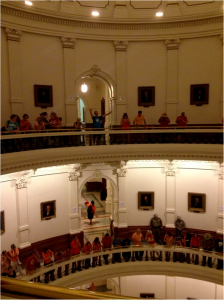 All day I had been cracking jokes about the confiscation of tampons, saying that people were not only wondering if #creepingsharia allowed abortions, but now also lamented about an Islamist’s take on sanitary pads. The hysteria, however, which would deprive me of my food in the same space where only days before dozens upon dozens of pizzas had been delivered to nourish the hungry protesters, baffled me. This was the #creepingGOP: abortions, tampons and now food were threats to America.

We walked away from the security area and met up with other friends. About a half hour later, I was up on the highest level of the rotunda, sitting to the side with my back against the wall while everyone crowded against the ledges. I broke my fast with water and the half-eaten muffin, which thankfully had been overlooked in the security process. Various officers in uniform walked past me multiple times. When none of them cared about my food, it became clear that this wasn’t a security issue. It was just another way to make it more difficult for me to properly exercise my democratic rights.

I noticed that there were a lot more people wearing blue shirts. On the night of the filibuster, there were almost no people wearing blue, whereas now they seemed like a sizable contingent, even though those in orange still outnumbered them. Inside the rotunda, they swayed in prayer while the pro-choice activists protested loudly around them.

We were there for three hours. We wandered through the rotunda, watched some of the proceedings in the overflowing room, where we got to see the “Senate at Ease” while some women chained themselves to the room. The disruption was much more interesting than listening to State Senator Jane Nelson drone on about how she’s an expert on fetal pain because she’s had five pregnancies.

We left around 11pm because I simply didn’t feel like I could push my body further. I needed food. By the time I got home, the bill -as expected- had been passed. 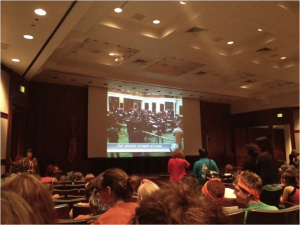 It is more than likely that most of the Muslims who have shown up at the Capitol over the past two weeks were pro-choice. And yet, both times I had gone I had been greeted with fellow pro-choice supporters holding posters about the Sharia and Taliban taking over Texas. At the time being I had tried to ignore the petty metaphors, but the morning after I awoke to an image that baffled me altogether.

It was a picture of woman dressed in a black burqa with a “Miss Texas” sash around her inside the Capitol. It felt like a slap across the face. I had gone to the Capitol wearing an orange scarf–not a black burqa–and was forced to deal with a more intense fast than usual because of my decision to stand for women’s rights, health and engage in the democratic process. In return, I was met with a caricature of a “Muslim woman” to protest the GOP’s [non-Muslim] oppression.

No matter how orange my scarf was that night, people had managed to conflate the politics of the swaying, praying Christian right with “oppressed” Muslim women swathed in black. Suffice to say, this shallow, knee-jerk polemic both disappointed and infuriated me. Indeed, this atrocious bill has given birth to (no pun intended) a number of facile and unfortunate proclamations about the Muslim world.

As a Muslim and a believer in the right of a woman to make her choices for her own body, I felt that both those in orange and blue – and all those in between acting as referees –  failed me and other Muslims in many ways, especially in the spirit of solidarity and inclusiveness.

Texas, I sincerely hope you take advantage of the next election and repeal the anti-abortion bill that sets back women’s health and rights.

I also sincerely hope that you leave your irrelevant posters and juvenile costumes at home so that the democratic space is a more inclusive space. 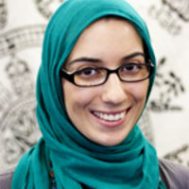