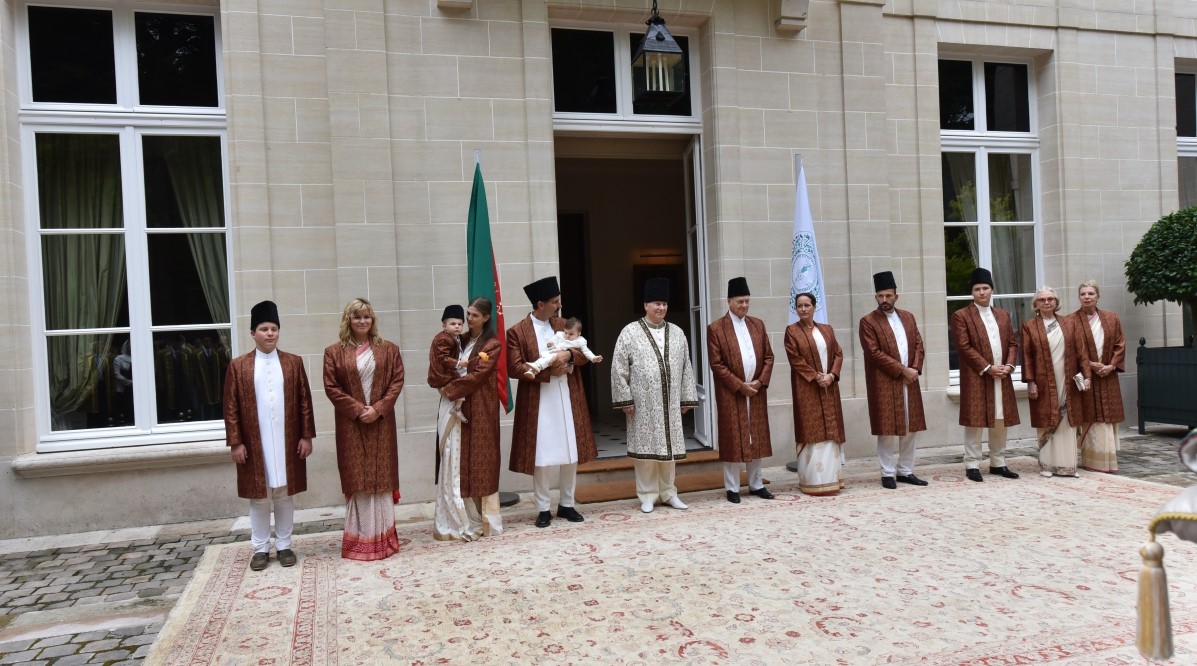 Beyond the realm of ritual worship, the Ismaili Imamat and community understand the religious obligations of Islam to include undertakings that help uplift the human quality of life for all people. To meet this objective, the present Ismaili Imam, Shah Karim al-Husayni Aga Khan IV, founded the Aga Khan Development Network (AKDN) as a contemporary endeavor of the Ismaili Imamat. Today the AKDN operates across 35 countries with 80,000 employees and 100,000 volunteers. With an annual budget over $925 million, the AKDN executes development projects in many areas, including the eradication of poverty, the restoration of historic sites, gardens and parks, operating hospitals, creating schools, providing electricity, financial services and drinking water for millions.

While many have incorrectly branded the Aga Khan’s humanitarian efforts as venture capitalism or philanthropy, AKDN’s work is part of the essential mandate of Islamic leadership in general, and the Ismaili Imamat in particular. As the Aga Khan once explained to a group of Christian leaders in 2005, “What is not understood is that this work is for us a part of our institutional responsibility — it flows from the mandate of the office of Imam to improve the quality of worldly life for the concerned communities.” The AKDN is heavily supported by various donors, and its vision and mission reflect a Shia Ismaili understanding of the principles and ethics of Islam, especially the ethics of human dignity, compassion (rahmah), and justice (‘adl). Because faith (din) and worldly life (dunya) are intertwined in Islam, Ismaili tradition and the Imam’s mandate includes undertaking efforts to help the less fortunate become masters of their own destiny.

In addition to his extensive development work, the Aga Khan has discussed a myriad of issues pertaining to the contemporary interpretation of Islam. Two core issues that the Aga Khan constantly speaks about are pluralism and cosmopolitan ethics. Today, rising populism in Europe and North America are reactions to an increasingly diverse world. The Aga Khan’s message is an antidote to what some see as an intractable problem. In the Imam’s view, pluralism is not the mere tolerance of difference, but it is the active embrace of human diversity in all its forms as a learning opportunity while also affirming and strengthening the uniqueness of one’s own identity. As the Imam once explained, “Pluralism means reconciling what is unique in our individual traditions with a profound sense of what connects us to all of humankind.” 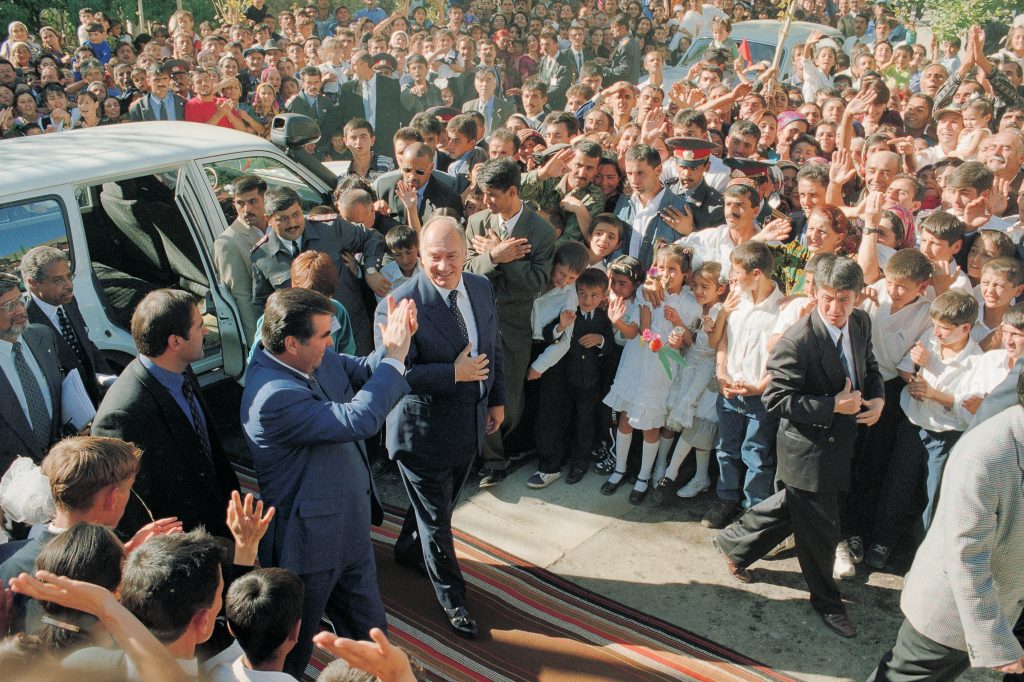 The Aga Khan welcomed by a crowd in Tajikistan, in 1998 >AKDN/Gary Otte

The Aga Khan grounds his vision of pluralism in Islamic metaphysics and mysticism: He describes diversity as a reflection of God’s creative blessings and preaches pluralism as a means for humans to attain self-knowledge — echoing the Prophet’s statement that, “He who knows himself, knows his Lord.”

For the Ismaili Imam, pluralism is not merely a theory, it is enacted in the real world in the form of what he terms a “cosmopolitan ethic,” consisting of ethical principles and universal human values that are broadly shared across multiple religions, cultures and communities. This ethic entails a collective commitment to these universal values while affirming every community’s right to practice their own distinct value systems.

The Imam’s vision of pluralism, cosmopolitan ethics and quality of life is ultimately based on the belief that all humans share and participate in an essential spiritual unity that underlies all human diversity. In numerous speeches over the past decade, the Aga Khan has consistently cited Quran 4:1, which speaks of all human beings as created by God from a single soul.

Jubilees of the Ismaili Imams: An enduring legacy 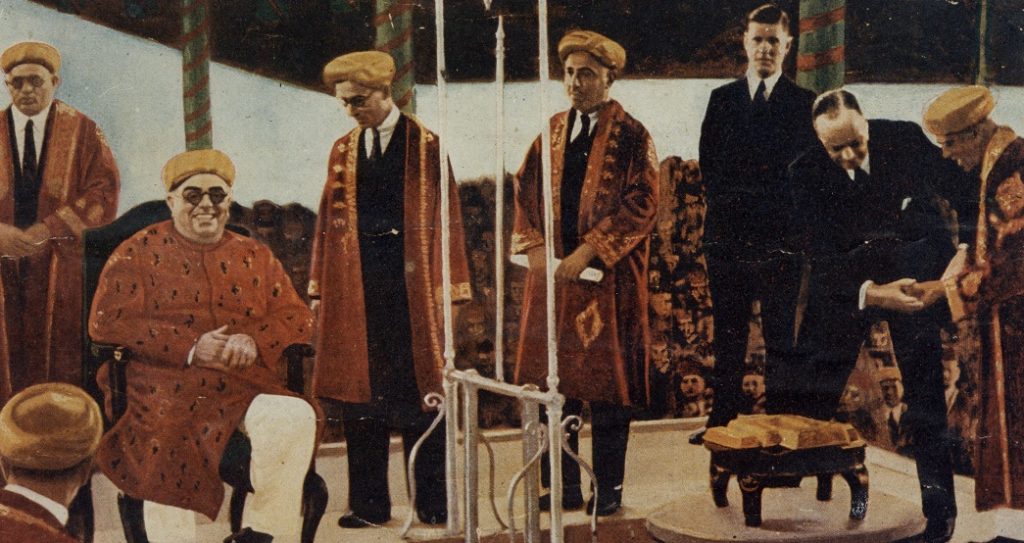 A jubilee for The Aga Khan >Simerg

In the first half of the 20th century, the Ismaili community celebrated the Golden Jubilee (50 years), Diamond Jubilee (60 years), and Platinum Jubilee (70 years) of the present Imam’s grandfather, Aga Khan III, the 48th Ismaili Imam. As a symbolic gesture of the community’s gratitude to the Imam for his guidance and spiritual blessings, community members sought to offer Aga Khan III a financial sum equal to his weight in gold, diamonds and platinum during his respective Jubilees. The Western imagination remains affixed to this image of the Aga Khan. However, this sort of gesture was already common in commemorating the reigns of Indian monarchs in South Asia. The Aga Khan accepted the offer on the condition that the proceeds from each weighing, boosted with his own funds, be used to improve the social, economic and educational status of the Ismaili community and others.

Commemorations from Aga Khan III’s Jubilees have been far-reaching, including: creating insurance companies, hospitals, schools, development projects and addressing ultra-poverty. The Silver and Golden Jubilees of the present Imam, Aga Khan IV, were also commemorated respectively in 1982 and 2007 with the launch of numerous Ismaili community and AKDN development projects.

The Diamond Jubilee of the present Ismaili Imam

The Diamond Jubilee of Imam Shah Karim al-Husayni Aga Khan IV was commemorated on July 11, 2017. In the 1,400-year history of the Ismaili Imamat, spanning 49 hereditary Imams, Aga Khan IV is one of only five Ismaili Imams to reach the milestone of 60 years of Imamat. Some of the Aga Khan’s goals for the Diamond Jubilee include the alleviation of poverty, improving people’s access to finance, early childhood development, stabilization of AKDN institutions and universities, providing more communities with access to clean water and electricity, expanding religious education and promoting a better understanding of Islam among the general public. In a recent press call with journalists about his Diamond Jubilee goals, the Imam emphasized that “the nature of Islam is a faith of peace; it’s not a faith of conflict or social disorder, [but it] has been used in a political process, or a part of a political process, for political goals.” The Imam further stressed that it was “absolutely incorrect to try to move Islam out of the context of global monotheism,” because “Islam is an Abrahamic faith, it’s a monotheistic faith and most of the principles of Islam equate with the principles of other major global monotheistic faiths.” To help meet these goals, the Imam has invited the entire Ismaili community to offer their time, knowledge and skills as volunteers within an Ismaili institution or an AKDN agency in a developing country. 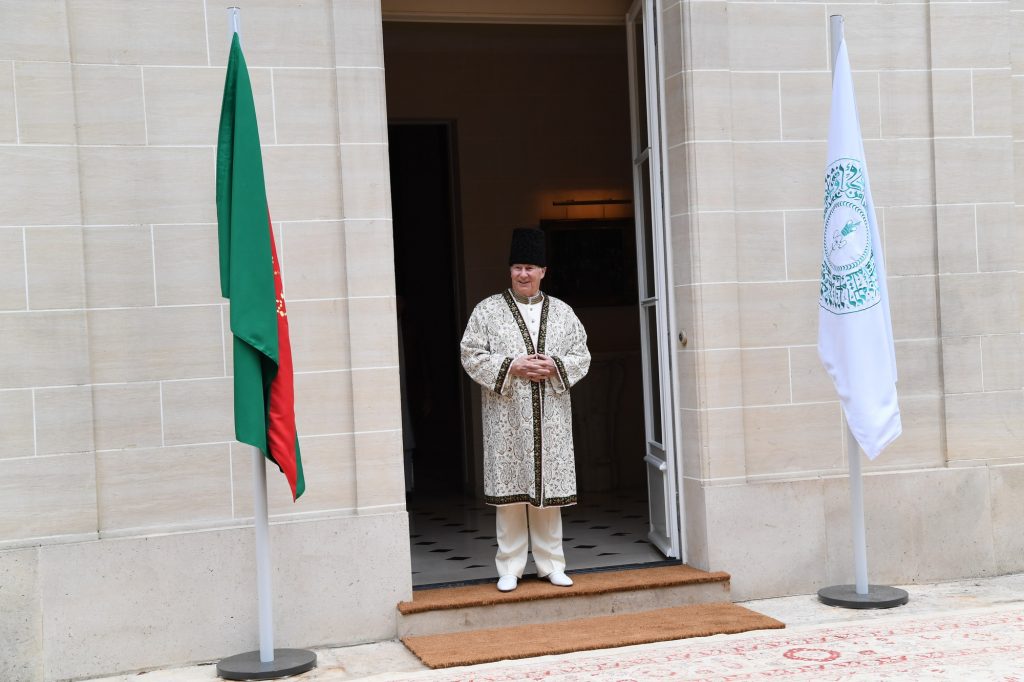 The Diamond Jubilee Year began with an homage ceremony attended by representatives of various Ismaili communities at the Imam’s residence July 11, 2017, from where the Imam delivered a special address to the global Ismaili Muslim community. The Diamond Jubilee gives Ismaili Muslims worldwide a chance to reaffirm and reflect upon their spiritual allegiance to the living Imam of the time and the ethical principles of Islam, and an opportunity for all people to celebrate the Ismaili Imamat’s vision. Reflecting the Ismaili Imamat’s affirmation of the God-given diversity and unity of humankind, the Aga Khan’s Diamond Jubilee Emblem is a display of the Quranic verse (49:13) about God making human beings into different nations and tribes so they may know one another.

Despite being a Muslim minority within a minority throughout history, Ismaili Muslims and the Ismaili Imamat have had a profound influence and impact upon the world. Events like the jubilees provide an opening for the Ismaili community and the Aga Khan’s institutions to achieve what can normally be accomplished only in several generations. While the Aga Khan continues to champion the causes of pluralism and cosmopolitan ethics, one of the necessary preconditions for a better world is greater mutual understanding between faiths and cultures. At a time when the faith of Islam is distorted and perceived through political rhetoric, the public’s knowledge of Islam is better served by the efforts of Muslim communities to both educate others and improve human life.

This need for deeper understanding also extends to the intra-Muslim context where knowledge concerning the diverse history and beliefs of minority Muslim communities, such as the Shia Ismaili Muslims, is often scarce. The Aga Khan’s Diamond Jubilee is an occasion for Muslims to become better informed of the history, beliefs and practices of Ismaili Muslims and other Muslim minorities.

As this series of articles has explained, Ismailis are a branch of Shia Muslims; they recognize the religious authority (Imamat) of Imam ‘Ali and his lineal descendants up to the present Aga Khan; they practice the rituals of Islam in a distinct manner according to the guidance of Ismaili Imams. Ismailis also remain strongly committed to working for a more pluralistic world where humans can both celebrate their God-given differences and intuit the deeper spiritual unity that underlies all human diversity.

Khalil Andani is a SSHRC Fellow and doctoral (Ph.D) candidate in Islamic studies at Harvard University focusing on Islamic theology, philosophy, and intellectual history and holds a Master of Theological Studies degree (MTS 2014) from Harvard Divinity School. His doctoral research focuses on the development of Muslim conceptions of Revelation with particular attention to Ismaili Muslim doctrines of Qur'anic revelation and hermeneutics. His publications include a forthcoming article about the Ismaili influences on al-Ghazali's cosmology in the Oxford Journal of Islamic Studies, two peer reviewed articles on the Survey of Ismaili Studies in Religion Compass, a chapter on Nasir-i Khusraw’s Ismaili philosophy in the The Oxford Handbook of Islamic Philosophy, and two articles comparing Ismaili cosmology and the Christian metaphysics of Meister Eckhart in Sacred Web. Khalil is also a Chartered Professional Accountant (CA-CPA) and has completed Bachelor of Mathematics (BMath) and Master of Accounting degrees at the University of Waterloo (2008).