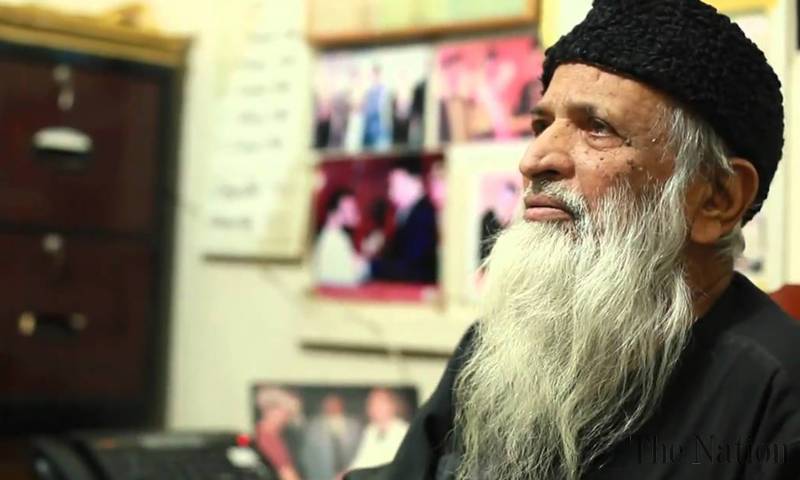 Although “Pakistan” literally means “land of the pure” in Urdu, if we were to objectively look at its 70-year sociopolitical history, it would be quite difficult to find much purity there. At a macro level, there have been numerous military coups, high-profile political assassinations and never-ending sectarian violence. There have also been many prominent Pakistanis: founder Muhammad Ali Jinnah, cricket-superstar-turned-politician Imran Khan, and world-renowned musician Nusrat Fateh Ali Khan singing into the heavens. It is my personal belief, however, that each of these figures collectively pales in comparison with the overall aggregate societal impact that longtime humanitarian Abdul Sattar Edhi — who passed away near the age of 90 in July 2016 — had on the everyday people of Pakistan.

“Abdul Sattar” literally means “the servant of the One who conceals the flaws of others” in Arabic, quite a fitting name for a humanitarian who almost single-handedly served the needs of millions of orphans, lepers, beggars, prostitutes and other marginalized and forgotten people across Pakistan.

Edhi was born in India, which was under British rule at the time, but moved to Pakistan in August 1947 just after that country was created. During his early years, Edhi begged on the streets of Karachi to raise funds to buy a battered old van that he turned into his first ambulance. Over 60 years later, his Edhi Foundation nonprofit operates over 1,500 ambulances throughout Pakistan, all via public donation. In fact, the Guinness Book of World Records in 2000 said the Edhi Foundation was the “Largest Voluntary Ambulance Organization in the World.”

Over the years, Edhi created a national network of much-needed social services throughout Pakistan, including rehabilitation centers, soup kitchens, pharmacies with free medicine, homes for women as well as the mentally impaired, welfare centers, animal centers, orphanages and child-adoption services, missing persons service, workshops to teach skills-based work, refugee assistance, and morgues and burial services (including graveyards). Thousands of Pakistani children have Edhi and his wife, Bilquis, officially listed as their “parents” in legal government documentation. “Edhi services are accessible and open to all but devoid of religious and governmental support in any monetary form,” according to The World Bank.

A highlight of his selfless dedication, Edhi often personally drove his ambulance despite Karachi’s bloody gang violence and would care for the injured or wash dead bodies and provide them with proper Islamic burials, according to National Public Radio.

Edhi once famously said during a documentary interview. “I have never driven anything else but an ambulance my entire life. I drove an ambulance for 48 years, picking up the helpless, driving them to the hospital and then back home.” According to Edhi’s 1986 autobiography, he would personally recover stinking cadavers “from rivers, from inside wells, from road sides, accident sites and hospitals. … When families forsook them, and authorities threw them away, I picked them up. … Then I bathed and cared for each and every victim.”

In a 2009 interview with the Daily Times newspaper, Edhi said, “I have never been a very religious person. I am neither against religion nor for it. … My religion is serving humanity and I believe that all the religions of the world have their basis in humanity.”

“No race. No religion. Just humanity,” was one of Edhi’s lifelong mantras in terms of how he viewed people of different religions, ethnicities or socioeconomic statuses.

Many people admired Edhi for stubbornly adhering to his policy of only accepting private donations and refusing all government offers of monetary support. He was quite proud of the fact that average Pakistanis have donated over 750 million rupees to his centers across the country.

Because of his stoic unwavering commitment to helping Pakistan’s destitute and forgotten, Edhi has been referred to as “Pakistan’s Mother Teresa” and VICE once even referred to him as “Pakistan’s Real-Life Superhero.” He saw charity as a central tenet of Islam and lived humbly with Bilquis in the same building as his organization’s offices.

“My husband never even built a house for himself,” Bilquis commented in another documentary, “nor did he ever wish to own a house.”

Despite his tenure as Pakistan’s foremost humanitarian, Edhi received death threats and encountered other hurdles. Although rival violent street gangs in Karachi would mostly halt their gun battles to let Edhi’s ambulance staff take away the wounded and dead, according to his obituary in The Guardian newspaper, some gangs and mobs have on occasion attacked his ambulances, Islamists once took over a facility in Karachi and he’s received criticism over baby cradles his foundation set up to accept unwanted babies as somehow advocating illegitimate births.

Edhi once discovered that many impoverished Pakistani women were killing their babies at birth, often because they were born outside marriage. He decided to place a prominent swinging baby cradle outside every Edhi center across the country with a sign that stated: “Do not commit another sin: Leave your baby in our care!” Because of this campaign, Edhi has saved more than 35,000 babies from infanticide and successfully found families to adopt nearly half of these babies.

“There are 375 centers and each one has a crib outside,” Edhi said in a documentary. “Any woman can place their unwanted child in whatever condition in one of these cribs and nobody will ask her any questions whatsoever.”

Edhi won over 250 international awards, though many people were upset he never won the Nobel Peace Prize, for which he was nominated many times. Nobel Peace Prize winner Malala Yousafzai told BBC Urdu shortly before Edhi’s death that “as a Nobel Peace Prize winner, I hold the right to nominate people for the prize and I have nominated Abdul Sattar Edhi. … If we wish to pay tribute to Edhi, it is our responsibility to leave a legacy of service to humanity and if we want to pay tribute to him, it is our responsibility to follow his footsteps.”

British journalist Peter Oborne once wrote in The Daily Telegraph: “In the course of my duties as a reporter, I have met presidents, prime ministers and reigning monarchs. Until meeting the Pakistani social worker Abdul Sattar Edhi, I had never met a saint. Within a few moments of shaking hands, I knew I was in the presence of moral and spiritual greatness.”

“I wanted to teach the nation how to give,” Edhi said in the documentary interview. Living the life of a dervish philanthropist and with a quenchless desire to clothe, house and feed Pakistan’s poorest and homeless, Edhi himself owned just two pieces of clothing, including his own burial shroud. According to The Nation newspaper in Pakistan, Edhi even dug his future grave with his own hands over 25 years ago in preparation to meet his Maker.

Not surprisingly, one of Edhi’s final wishes was to have his organs donated after his death, but due to his poor health, only the corneas from his eyes could be harvested.  Upon his death, they were transplanted into two blind individuals giving them light for life.

The world may have lost Edhi, but his humanitarian legacy will live within the people of Pakistan forever.